I have recently been playing Batman arkham knight, and also some Hitman 2,.

But i think ‘47’ would be in insanely cool batman villain…

They are both ‘stoic’ in their personality to a degree, a confrontation between them could have some potential for cool dialogue.

Black Mask only hires the best of the best. 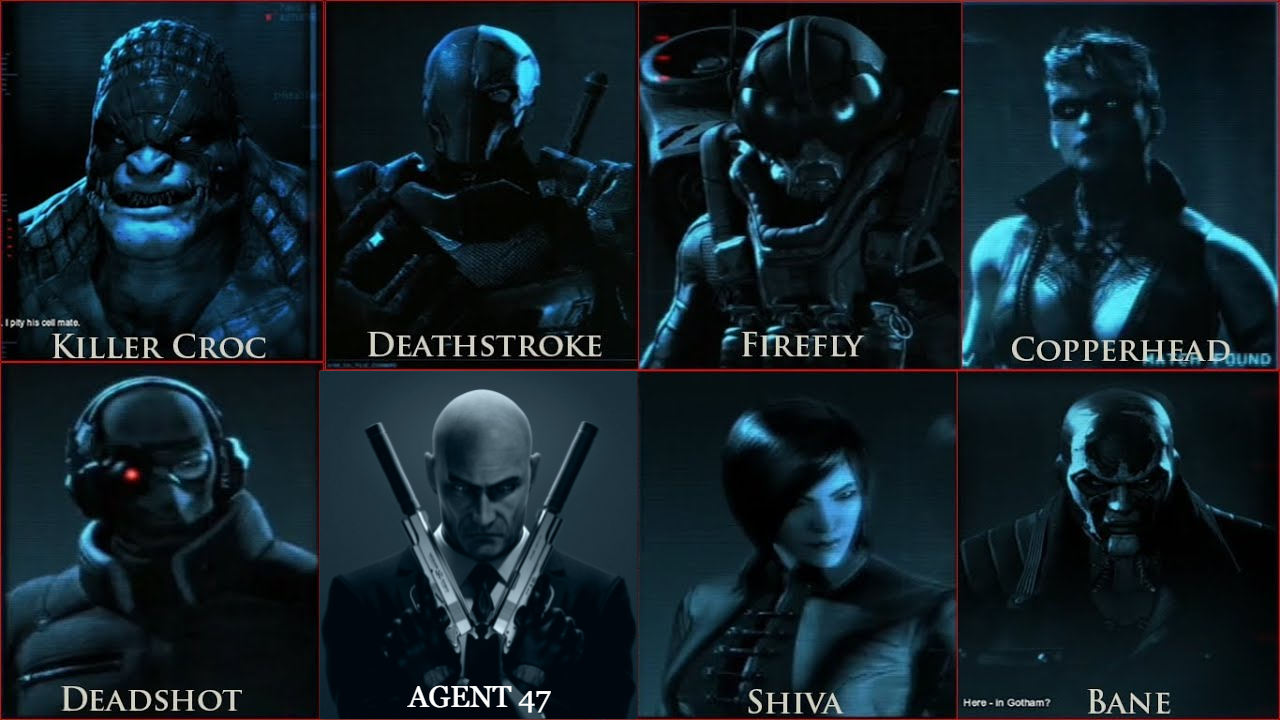 Lol yeah this is perfect!

Did you make this or find?

Could be a pretty cool side mission in one of the Arkham games.

Batman finds a death person who has been crushed by a gargoyle in what’s seemingly just a tragic accident. The player then uses detective mode to search for clues and reconstruct the events, revealing that it was not accident but murder.

Sometimes later Batman finds the corpse of a person who accidentally burned himself. Again detective mode reveals that it was murder. It also turns out that both victims were members of the board of directors of a large company. And there’s a third board member currently at insert location here. There are also some hints pointing at the ICA and 47. Because he’s Batman he knows about the ICA and 47 and what they are capable of.

Batman arrives at the location only to discover the naked corpse of security guard in a dumpster. So 47 is already inside and has disguised himself. Batman enters the building.

Cue Predator map: A room, a bunch of armed guards and one of them being 47 in disguise. The guards are hostile because insert reason here and now Batman has to find and take out 47. If he’s spotted or takes out the wrong guards it will alert everyone, allowing 47 to escape.

Batman has to stay in the shadow and check the guards until he finds the one with a barcode tattoo on the back of his head. Batman grabs 47, a short dialogue happens and then Batman knocks him out and looks him up for the GCPD.

Later you have to come back and scan his barcode for one of Riddler’s riddles.

Yeah spot on sort of thing i was thinking, and yh lol the riddler’s riddles… I am literally chipping away at them now for 100%

Riddle me this! Of how many people are needed to scan the barcode on a single egg?

No. Just because WB owns him now doesn’t give them the right to just shove him with Batman plus I am really over the wanking WB/DC gives Batman.

To be honest it was not a serious proposal, but fun to imagine

I know and to be fair Hitman is best suited for Gotham but I mean making him become a Yellow Lantern is just much more appealing to me.

Sorry for ambushing you like that though. I figured this would be more of a goof I just let my apathy towards Batman get the better of me.

@EvilGeniusRo @Accidental-kills98 @Pitman @Richard_Tucker there is a mod to one of the Batman games where you can play as agent 47 just saying.

Ha that’s funny you mentioned that, i saw a video of that mod yesterday, it was either in ‘Arkham city’ or ‘Arkham knight’

Hitman would kill all of the villain in Batman universe. That is the problem.

I’ve thought about this quite a few times. It’s an idea that clashes with both characters. While the “capture all baddies” archetype is still going strong with Batman, 47 doesn’t have the luxury to get caught himself, much less by the Batman.

Hypothetically speaking, 47 would be aware of the situation of a caped vigilante watching over the city and a target, so any mistake he makes technically would be an insta-fail. To avoid being caught he’d be running on a tight schedule; changing disguises, hiding the bodies, avoiding the cameras, not shooting with his Silverballers as it could trace back to him…

It would actually be a smart thing to pin the blame on someone else; someone in Gotham who would want the target eliminated, such as Black Mask or Penguin. Use a masked gang member disguise and be detected on camera, acquire a gang weapon and kill the target as loud as possible, initially eliminating the possibility of a professional hit.

When Batman is hanging Black Mask over a 100-story rooftop getting answers out of him, 47 is flying out of Gotham and none’s the wiser.

Steven! Good to see you, haven’t seen you on the forum for a while

Here’s how it would end: