First of all, I have to say that this bug concerns HITMAN 2016 Paris level, but because I play it in HITMAN 2, the topic should relate to HITMAN 2 in my opinion.

There’s a strange problem with a briefcase in HITMAN 2 Paris level.
I’m trying to complete the location on Mastery difficulty level and with SA rating so I’m using a briefcase to smuggle a gun to the top floor. But when I pass the guard standing on the right side outside of the mansion near the crowd (who’s also drinking wine from time to time), he is always suspicious of me for some reason. Even if I spawned on the level with my briefcase and didn’t do anything yet, he is still suspicious every time I come into his view. Although other guards behave normally!

Does anybody know what is the reason of that? Does having a briefcase with you make guards suspicious? Then why don’t other guards pay attention to me? It seems so odd and inexplicable to me.

What do you think?

P.S. Before trying to go to the upper floors through the right side of the mansion (passing that infamous guard) I went to the toilet to change my lockpick that I had in the briefcase for a silverballer. Might that be the reason for the guard to be suspicious of me?

This has nothing to do with the briefcase, that guard is just an enforcer to your suit. We don’t know if this is intended or a bug as in H2016 this guard was no enforcer.

I can’t figure out which guard you are referring to.
Can you post a screenshot of him or provide his location more detailed?

When you start in the garden and enter the outdoor area with the guests, there is a guard who is an enforcer to your suit. He also stands at the inside every now and then. 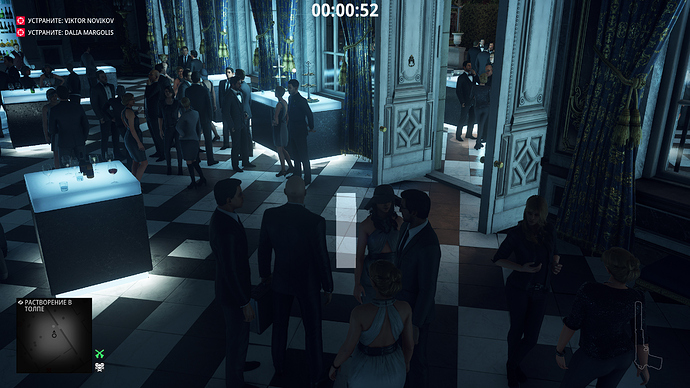 Yeah, this one, with a mustache

I understand English pretty well, but can’t possibly figure out what you mean by an “enforcer to your suit”. What’s this?

Uh… No clue what was said tovarichos. But yeah, that guard is an enforcer just because… to get 47 to blend into the surrounding groups of people. It’s IO’s way of forcing you to use the new blending in feature.

But this feature is broken bad now.
You can’t hide in the crowds when someone compromised is at you.
He will see you through crowds no matter how much of them there are.
And I think a lot of players know that from some point you can’t anymore hide in the crowds after any illegal (even unseen and reasonably far) action. Most of all this applicable to Miami. Crowds in there just turn towards 47 scared and retreat from him forming a circle around him.
I’m more than confident that this should not be like this and the crowds are just broken by now

Misterkiller replied to the thread and OP could see where Misterkiller is from and most likely thought to write in their native language to clarify whay enforcer meant.

It’s quite the normal thing to write in your native language for a better understanding when English isn’t your strongest subject.

OP didn’t know what enforcer meant and Misterkiller explained it to him in their native language so OP would get it.

Why is that an issue?

Really? Never would have thought so

I know, that’s why I’m saying that the post serves no purpose

I just don’t see the reason to point that out when OP started the thread by writing in English.

The post would make sense if OP started the thread by writing in their native language.
And even then it’s totally fine. Especially in a topic where you’re confused about a game mechanic.

Not every country teaches English to the point where they can communitate over the internet, like
Germany where they even dub Hollywood movies to their language. A strong source to learn English.

like
Germany where they even dub Hollywood movies to their language. A strong source to learn English.

Wait wait wait, don’t all non-english countries do that?