I’m planning to do an analysis video of BM’s early alpha & beta content on my Youtube channel some day in the near future.

I checked for existing threads but as expected, the new HMF (post 2014) has no threads for interesting subjects like early builds of Hitman games (except for Hitman 6… sigh) so i decided to make one exclusively for Blood Money.

I found something interesting in the map files’ string data. Apparently ICA originally supplied 47 with additional services (much like Payday 2’s favors) such as placing cloth bundles, handguns, extra syringes, disabling alarm systems and supposedly bribing guards to not frisk 47.

The only feature that seemed to make it to the final build was the ability to store heavier firearms in the ICA boxes.

This would’ve given us more to spend our money on!

Awesome features! I really wish they somehow find a way to add this in the new HITMAN series (coupled with a money system of course)

I know they tried to implement money but couldn’t, but I think a currency could improve peoples’ objection to the “save the world” nature of the new games.

Imagine how easy it would’ve been having extra syringes. Many issues would’ve been solved, but it screams OP. You Better Watch Out is a good example as I use the syringes to make my way up, and the lack of them means I need to improvise to keep an SA rating. More syringes means an overly easy way to complete the mission, but it’s there for whoever wants to use it

You can already just knock everyone out with a handgun. It makes a bit more noise but not by much.

Awesome features! I really wish they somehow find a way to add this in the new HITMAN series (coupled with a money system of course)

The thing i miss the most from Blood Money is the accident system which allowed you to safely kill anyone, be it guard or civilian, while retaining your SA rating as long as it was an accident kill.

This would’ve given us more to spend our money on!

In addition to customizing guns, it’d be nice if you could pay for ICA services, customize/buy clothes,

That’s why that new feature to smuggle additional items on map would be at a price, so player have a slight advantage but have to spend money to have it (10000$ for example)

slight advantage but have to spend money to have it

I’d say one of the bigger flaws with contracts was the money, you just get so much of it that it basically becomes irrelevant. Like notoriety was a cool system but you always had more than enough money to pay your way out of it so it was kind of a waste. So sure charging for an extra syringe would be a gate of sorts, but not a huge one and really not enough to counter any OPness the syringe would bring (tho personally I doubt it would be too OP)

not enough to counter any OPness the syringe would bring

As i said in the post above, 99999999 syringes wouldn’t matter because you can knock out anyone with a gun.

Well yeah, but my post wasn’t really about the knocking out mechanic. I was talking about the money system in the game

Also, if you read the literal next bit

I said I thought extra syringes wouldn’t be OP

Also for the love of God call it Hitman 8 (why does everyone forget Sniper and GO?!) But seriously I get not calling it “Hitman” it’s very confusing, just call it Hitman 2016 or H2016 or H16? Whatever suits you tho dude

why does everyone forget Sniper and GO

That’s very ignorant logic. Those are mere mobile spin off entries, not major titles in the series. It’s Hitman 6. It should be obvious but apparently not for everyone. Even the data files of 2016’s alpha build refer to it as H6 or Hitman_6 (Developer’s coding references).

By that logic, GTA Vice City would be GTA IV, and GTA San Andreas would be GTA V.
Oh how the Hitman community has fallen…

I said I thought extra syringes wouldn’t be OP

Hi i’m new to the site but like to post something on this topics and i’m pretty sure this has talk about before somewhere on this forum. youtube.com/watch?v=6bHeXXmgJ5Q&list=PLD-ww9csINSHDoBkqse5QF1ONpHhzc44g&index=5&t=0s

Welcome Morgan. I’m very aware of that early build and you know what, i contacted the current owner of that disc 2-3 weeks ago and offered to buy it for 100 euros. Given this disc’s extreme rarity, i figured 100 euros would be good enough but the man asked half a grand for it, 500 euros. I still have the screenshot of our negotiation.

Bro… It was a joke

Oh how the Hitman community has fallen…

I remembered it wrong. I offered 50 euros. He told me to add a zero. I have a wealthy family so i could possibly buy this copy one day. I just pray to God he doesn’t lose it. 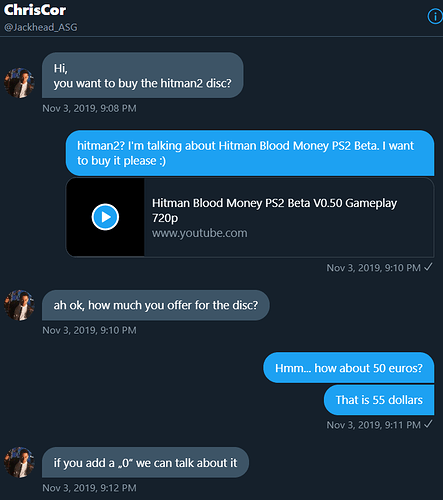 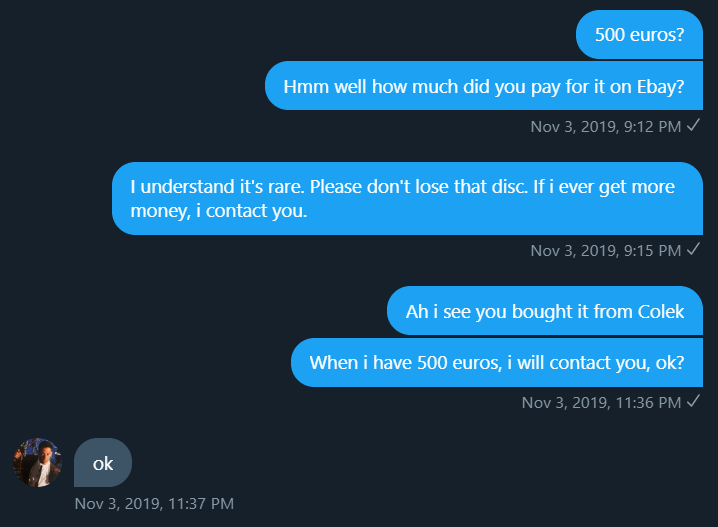 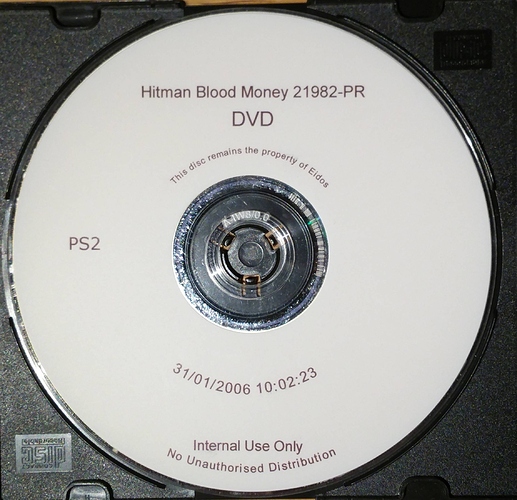 This rare build of BM was originally owned by someone named Colek. Later this ChrisCor AKA @Jackhead_ASG bought it as seen on this post.

Bro… It was a joke

You can use an empty spoiler box to get over the 20 character thing e.g.

Oh. Thanks man! I’ll keep that in mind from now on. I think the whole 20 char requirement is stupid as hell.