Has anyone heard of ChatGPT? It is supposed to to create game code and interact with players in games and VR… Might even be able to create different levels in games by using speech to recreate ever changing levels in games, would it be possible to be incorporated into new Hitman games in the future?

Here is something I saw online.what do you think? Will AI be the new way to create games? 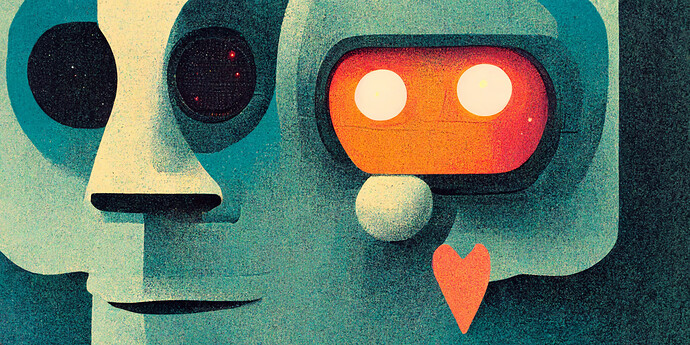 ChatGPT wrote this article about using ChatGPT for video games and VR –...

ChatGPT is quite impressive and has proven helpful for text adventures already. When it comes to collecting information and combine them in readable form, I think this project will be a huge thing in the future for many applications.

I can also imagine it can be used as an asset generator, for example textures or sounds. However in that regard AI developers these days train their AIs with stolen work of other artists, which is also why we closed a thread recently where people posted AI generated images:

It’s nice people are having fun but I’m closing this thread as AI art is not something I am interested in hosting on the forum for a number of reasons. I should begin by stating I don’t think anyone posting here had any ill intent, AI art generators have people with a lot of money and a lot of clout pushing them as whole positive. First and foremost, is that all the available AI generators are trained with vast libraries of images where they do not have permission to do so, but just decided th…

So, while discussing AI is welcome, please don’t post images generated by them, as we currently consider them piracy content.

Game levels are so hugely complex and very much depending on how users play them depending on the objectives and mechanics, I don’t see that being a thing in the near future. maybe in 50 years?

I really hope that will never happen.

Why? It could be a positive evolution to gaming.

I appreciate randomised content when there’s a human mind behind everything, people who thought things through and came up with ideas how to randomise missions so that they make sense, but AI written stories and quest lines just suck. Yes, some of them might resemble something worthwhile at first glance, but it’s not like there’s a shortage of people who want to work in the video games industry.

I’d also rather not have yet another hobby of mine invaded by AI.

I was thinking how epic it would be in 1st person as Agent 47 in VR interacting with NPC’s having conversations with headphones and mic. And also having the NPC’s reacting to different situations in real time. Every playthrough would be different, the level in the game would always be changing, the code would change the senerio.

It doesn’t create characters with motivations, write plots arcs, set up twists, etc. What it does is sample huge volumes of written text, and use that to try to predict what you’re expecting it to respond with. That’s really the only innovation, and it’s infamously chaotic and unreliable.

A huge part of what makes the Hitman ambient dialog enjoyable is the creative characters like Silvio, and also the world building conversations like the guy on the phone in the service corridor of the gold gilded tower complaining how he’s expected to work a triple shift with no overtime because “it’s part of your job.”

Dialog often gets held to a lot of scrutiny - people complaining about, for example, that soldiers in Morocco said “Semper Fi” even though they’d clearly never been marines (unlike say the freelance soldiers from previous levels who’d used it).

It just wouldn’t be fun to see a guy on a phone, sneak up to hear what he’s saying and have it a world salad about his salary as a ratio to the value of a floral display in an area he has no access to or no connection to. Worse it’d be easy for the AI to think its giving you a critical clue, such as the location of the target, but have it direct you to something that doesn’t exist as described.

AI creations regularly have major issues understanding how humans operate, and what humans expect. Say if you tried to make the AI invent different mysteries for Dartmoor, you’d almost certainly run into issues where “clues” are incomprehensible to a human because the AI generated a story that relies entirely on game mechanics and samples of dialog writing.

All of the necessary guidance for a playable level would have to be created by a human, and then playtested by humans to make sure it’s actually workable… and then still never be able to replicate the very human elements that make it feel like a real mystery rather than an arbitrary logic puzzle.

Developers are already capable of putting that kind of procedural generation (everything from the Jindosh Lock in Dishonored 2 to level designs in Roguelikes) and randomness into games, and in Hitman deliberately choose to avoid it because the appeal is finding all the ways you can tinker with the clockwork palace.

Chat AI is basically a fancy toy for showing off machine learning - but it is in no way ever going to replace a real human writer, who has real human experiences and interacts with fellow humans, for making a game to be played by humans.

Also the things are notoriously easy to manipulate and hence almost invariably start going on record spouting Nazi propaganda as a result of said manipulation by people interacting with… agendas.

So, while discussing AI is welcome, please don’t post images generated by them, as we currently consider them piracy content.

I was just curious if this stand applies to content/pics posted before this was stated. Given how long AI Generated “Art” has been around, and the bizarre or cool content one can get from it… and the human willingness to share said content… Should any of us that had knowingly posted anything AI Generated in the past take it upon ourselves to remove anything we’ve posted? Edit: I’m thinking of the Funny Pics/Vids topic…

Or can it be let go at this point - and for everyone else to be sure to not knowingly post anything AI Gen’ed from now on…?

We will reflect the matter in the guideline somewhat soon, but don’t count on having to go back through your posts. It is more a matter of how we handle it now. We did not delete the entire AI artwork thread for instance, though we might still do that. But that is not your concern.

If we get a DMCA request about an AI image posted in the past, we will just comply and delete that one. Of course you are free to delete AI pictures you posted previously to make this unlikely for your posts, but that’d be voluntary.

Well this topic went sideways…I was just curious if AI could be useful for upcoming games, didn’t mean to start an online war…Urben, it might be a good idea to delete this thread thanks.

This isn’t a war though? It’s people who have many different reasons to dislike AI disagreeing with your proposal. I’m sorry if I came across as rude, that wasn’t my intention.

I do feel that a large part of this comes from the people who promote AI products misrepresenting them and then people taking them at face value with their claims.

If you don’t know a lot about how computers work and how AI learning works, you don’t really have a good basis to doubt the guy who tells them that its ethical and the future of creative industries.

Where it becomes a problem and leads to hostilities is generally when people, trusting the creators of the AI stuff and the people who cover it, start getting deeply invested in it to the point where it starts to become part of their identity (ie “I’m a Hitman Fan, and an AI art/writing/design creator”) and so start to personalize criticism of the AI systems.

As I said in the AI thread, I can’t really blame anyone currently for not knowing how AI actually works since a lot of money has been spent getting people with a lot of clout to say that it does… a lot of things that it doesn’t do, and gloss over at who’s expense a lot of the progress has been at.

Like yes I can see the appeal of a game that writes you a new story every time and adapts to how you respond, that was the whole premise of AI Dungeon - and it was a zeitgeist for a while as people largely had fun not playing it sincerely but experimenting with its limits and laughing at its failings.

Three years later AI Dungeon now has AI Art, but ultimately isn’t that different or advanced - because the brick wall is that its not actually a creative writer - it’s a machine trying to guess what the user thinks a creative writer would supply in response to the prompts.

It can’t plan an original story that touches on specific aspects of the human experience because it doesn’t have a concept for the human experience - it just has pattern matching for texts already available so it is basically just an automated version of that kid who copies an existing story/essay and then changes some of the words and names.

It’s good for people to understand these things, if only so that they have informed ideas of what to actually expect from it - if you being excited about AI is dependent on things that it simply can’t do - its better to pull the band-aid off now rather than invest a lot of time and excitement into it.