I ask if you’ve planned on a specfic method?

shes getting tossed down the highest building in the hitman universe.
i preferably want to lure her to carls office balcony or starting point and toss her off there. but if i can’ t do that i will just use any convenient ledge Can anyone take screenshots of the target’s biography? I will be able to pass it only tomorrow, but it is very interesting to know her biography. Thanks for the previously🙏

Felt like posting my short poem of this months elusive target. It’s a little inspired by my perception of the ET.
It was kinda invigorating to write about it actually.

All of you vilified and hated me for seeing beauty before me.
You saw wrinkly and antiquated, whereas I saw sultry and pretty.
The thought of veneration came unacquainted and senile.
Therefore I put the unacquainted into style. 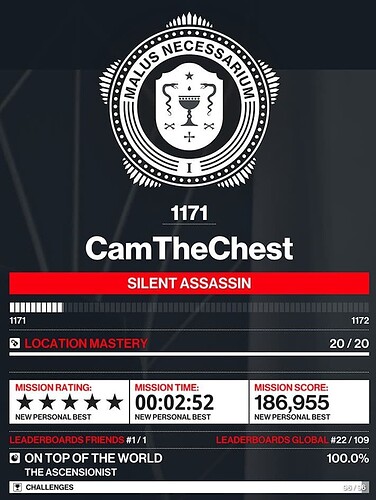 Well, at least I got to push her down the elevator shaft.

Can you poison his drink?

Well that was a more-difficult-than-at-first-glance Elusive Target.

An enforcer target, with a very long and complex routine.
The whole location seems to have been reworked, there are a lot of new NPCs and new enforcers at just the right locations to cut off the most obvious opportunities and all the normally safe routes (whoever had the idea to make new npcs routines in the normally safe rooms and corridors, I both love and hate you).

Still managed to poison the target with her tea in the black gold bar vip area, but that was after a bunch of work, tries and errors. Well, it was a bit messy and I still don’t know how I avoided the enforcers (alright I know how, I ran away like hell and just next to them but you all get the idea).

My second kill was a more secure if harder to reach opportunity.

I served emetic poison to her mark with the famous chef disguise in the penthouse,I then syringed the target after she followed him and waited outside the bathroom. I guess it was a good callback to the bathroom death of her previous mark and our current client. 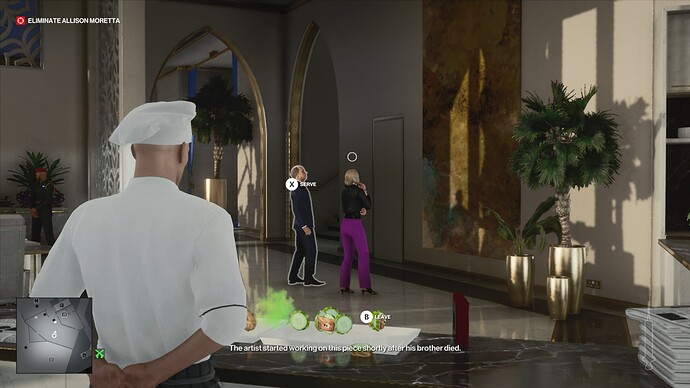 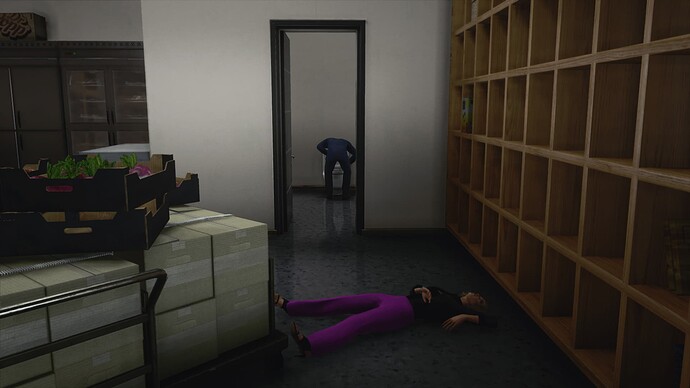 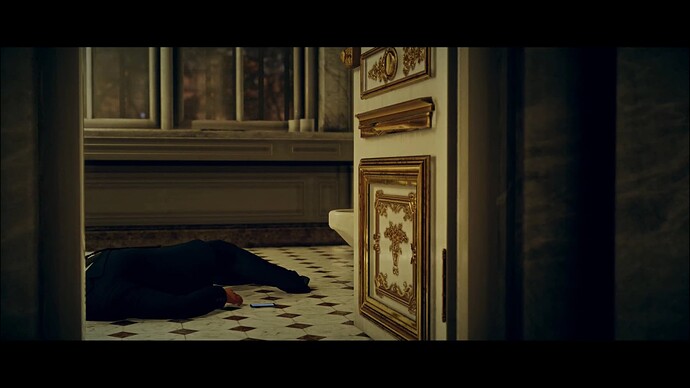 I saw a bunch of other opportunities but I saw an opening and took it. I think you can do something with the laptop at the reception and the target schedule. I can’t wait to see what others find. 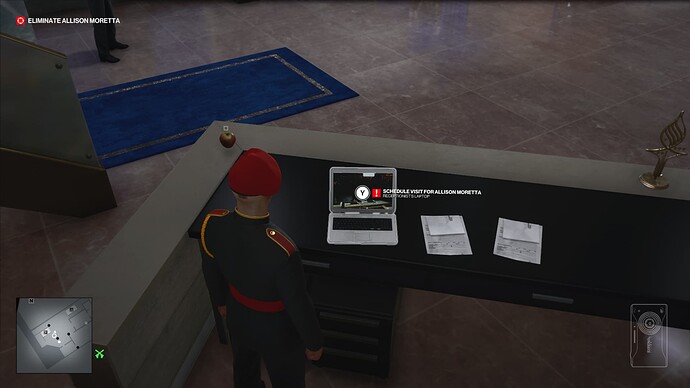 This run was much more rewarding and came with a long (and stressful) tail and rise to the top of the level. I had to play around all the changes, I saw a bunch of small details (apparently someone broke a camera before us, certainly some ill-intentioned vandal). 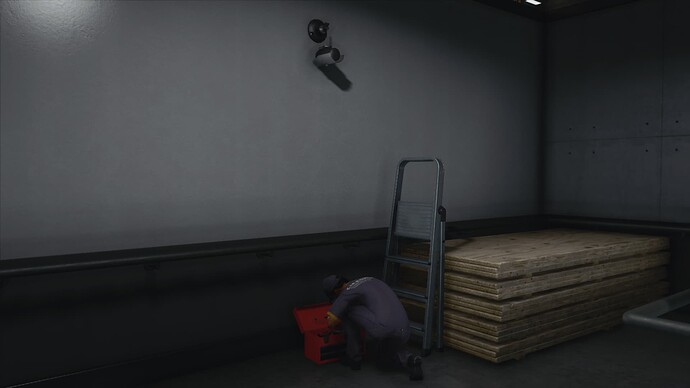 I thoroughly enjoyed this second run. It was just the right kind of stressful, surprising, and use of all too forgotten rooms (I distracted a guard for his disguise in and with the bathroom next to the server room, I had never used this room before this run).

Also, is the team at IOI starting to be cheekingly autoreferential ? They certainly earned it, they are doing some great work.

And yes, “swiss cheese” is the term they use to describe their level design. 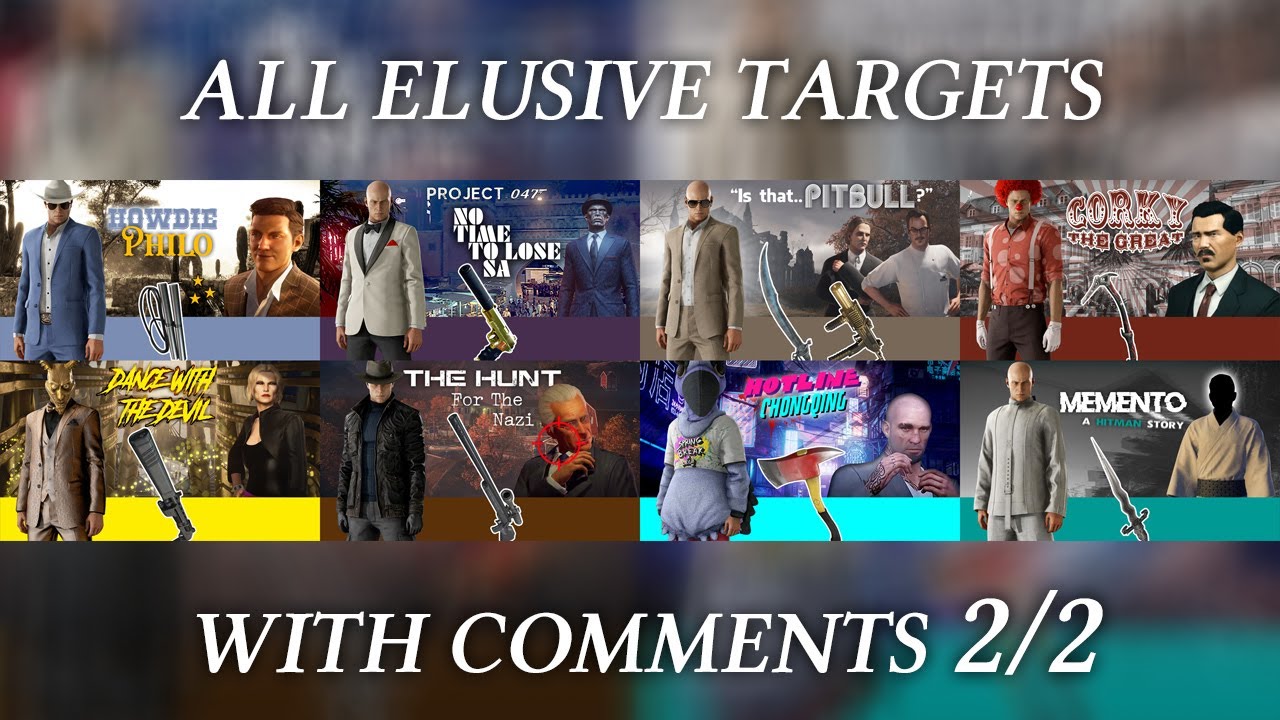 Well color me confused. I loaded this up and started in the atrium. After running around for maybe 5 minutes and not finding any sign of this lady I figured I’d try the penthouse in case she went up there. I just used the standard way of getting up there a la the Re-arrange the meetings opportunity. I was surprised to see that the keycard doesn’t do anything in the server room and I did like the extra guards and maintenance people.

Anyway, when I got to the penthouse, I finally found her but she just did the same loop between a few painting, to the balcony railing, and then back to the same paintings. It wasn’t a long loop by any means. She never was anywhere near the Black Gold bar that I saw - just in the penthouse and she never left that area.

In the end I walked up behind her, emetic poisoned her and the dude, and then followed them to the toilet. Oddly the guy walked to the bathroom near Ingram’s room while she started to go downstairs but I knocked out the guy and she turned around to hit the bathroom I was standing in. Drowning killed her. I then jumped off the building.

That didn’t go well. Lost SA very early, but I managed to shove my pride into a deep, dark hole and carry on for the sake of #TeamNoRestarts. Followed her around forever, had my kill all set up…then got the notification that she was spooked, said, “Screw it” and shot her in the face. (Damnit, I should have at least thrown the Ornate Saber. Obviously not happy with my own performance, but I quite liked the mission itself.

Whoever designed this one hates me. I’m taking a break from attempting to kill this b*tch.

First attempt I found her in the meeting room where you meet with Ingram as the assassin. Went to fetch an item and she was gone… and I mean GONE. Ran all over the map looking for her for like an hour before giving up and restarting.
Found her in the atrium… but…

I don’t want to fart briefcase this, but my patience is wearing thin. Assuming there’s a lamp explosion thing in the penthouse since there’s some new stuff there, but I never saw her there on my first run. shrugs

Seems like they changed more with the level than a lot of other ETs they’ve done. I believe once she goes to the upper area of the map she never goes down, and I think scheduling the meeting as shown in another post makes her go up there faster. It might skip a part of her routine where she actually waits on the floor with the security room and makes a call about going further up, but I’d imagine there could be more to it than that.

Has anything been added or changed in that upper area to “suggest” a particular type of preferred method? The Bad Boy added a car and the ET was designed about messing with that to better get to him, so I was curious if there’s a suggested way IO wants you to figure things out. Enough of the map has been changed to make me think they’ve created an opportunity here; unless a patch added these, but there’s more of those light stands that can explode where she ends up going.

You might have lost silent assassin, but you had style during it. And that’s all that matters.

(and for @Kent, you can drop from the corridor above the vip area to access the tea cup, you still have to run past the enforcer to exit but it is possible if inelegant)

I had my opportunity to dump her, but I had already been spotted by the guard in the Rm where he tells the maid to work slower. The first instance I saw her was going by the room with the guard that sleeps, even looking down one of the elevator shafts. After that, she seemed to stay only in the upper area with a looping path… Never going back down to the elevator shaft or anywhere else. There are a few instances that are clearly baiting the player -I think. I imagine there’s potential for collateral damage.

There are only 9 more days to get her. Maybe I can come up with something not too boring, and hopefully without having to subdue a ton of people.

Edit: Nah. I got bored and felt inspired to try something.

You can’t get into the VIP bar as a waitor because a fucking Enforcer is right outside (and an extra one inside if you manage to get there somehow).

You can climb there this way but I don’t know if any of the added NPC:s would spot you. 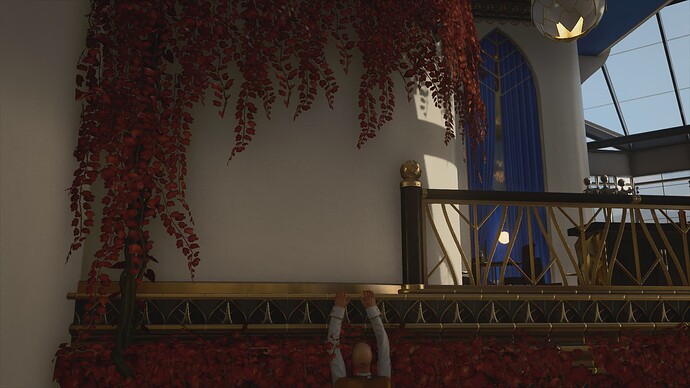 I saw a bunch of other opportunities but I saw an opening and took it. I think you can do something with the laptop at the reception and the target schedule. I can’t wait to see what others find.

So she goes to the penthouse even without you scheduling a meeting? I thought she would just sit in the reception until you do that.

She must since the penthouse is the only place I ever saw here and I didn’t mess with a laptop or anything else. Nothing I did would have disrupted her normal routine so she must go up there on here own after a while. Once up there it appears she never leaves.