Although the subject of a global manhunt, the target has successfully evaded capture and prosecution for more than a decade. Tired of waiting for the slow wheels of international justice, the client has turned to the ICA.

Intelligence places the target inside the Swedish consulate, most likely involved in the operation to extract Strandberg. The situation is fluid, but this is our best opportunity to eliminate him before he vanishes again.

Among those in the know, Vito Đurić is a celebrity. He is a charismatic arms dealer and sanction buster with the reputation of being able to acquire anything for anyone. The ICA notes his involvement in almost every covert conflict of the past decade.

The target has been the subject of an international arrest order for the past five years but has avoided or escaped arrest thanks to the support of his clients. It seems likely that he is considered useful by various intelligence agencies and thus enjoys a measure of protection from international justice. Such protection does not apply to the attentions of the ICA, however. The contract indicates that the target will be in Marrakesh as part of an arms deal supplying Reza Zaydan’s forces in connection with a planned coup. 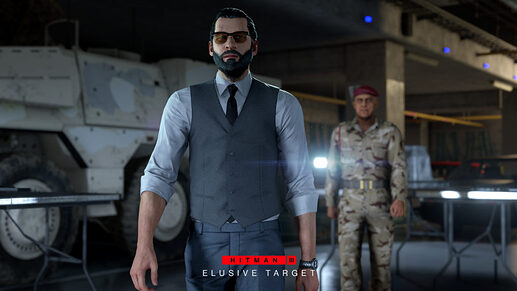 Got a much better strategy for this prick now. Turns out, if you sneak into the parking garage and get behind him and the soldiers near those big vehicles, you can use the Sieger-1 on him and he will go puke alone at a trashcan near the embassy back entrance, the one near the stairs to the second floor with that guard and soldier talking. Get him to that spot, let him stop puking, throw a coin inside and he’ll go, moving out of anyone’s site, and then take him out. You can then drag his body (carefully, you can be spotted on this part) upstairs to that back storage room and stuff him in a bin. Done right, it can be SASO, and that’s what I’m gonna use this time. 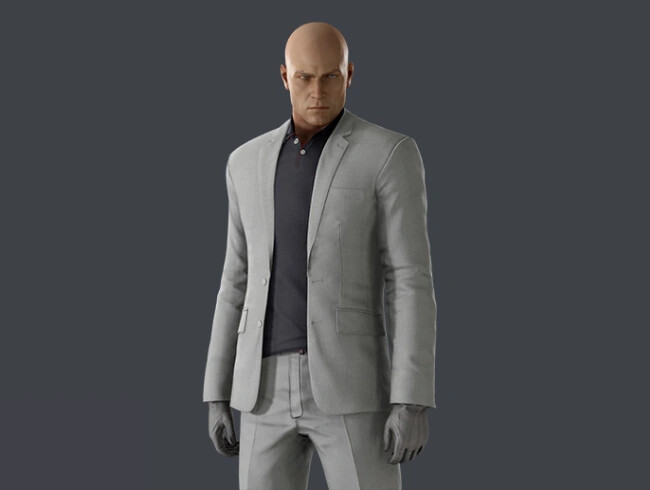 I’ll probably just default to getting him into lockdown mode with a remote explosive. He stands in the same place Strandberg and Zaydan have their meeting, perfect for a fire accident kill.

I discovered an even better alternative method after he goes to the bin to puke, where you snipe the door to his right from behind a pillar as he finishes. He then goes inside the room where you can shoot him and his body won’t be found.

I’m confused, is that tomorrow already? I thought the Serial Killer went on for another couple of days?

The ET will be concurrent. They run for 10 days and are released every 7 days (all content releases on friday).

This happened a lot recently, since Elusive Target are the main content type used in the recent roadmap.
Before they were launched every two weeks with some other kind of content released in the week between. But since there is nothing else to pad the roadmap…

Also, a bit of a question to everyone : is there a curated/designed elimination on this ET ?

Or is this one of those Hitman 2016 “we put something together, entangle it yourself, it will run once for 48 hours and never again” ET ?

Because currently, in the Arcade, my strategy is :

It’s a safe strategy with no real enforcer in the way, but it’s messy.
At first I thought that the solution was the target lockdown followed with the fire accident in the tunnel, but the target doesn’t stand in or even near the puddle.

Not my style. Shooting a door open isn’t subtle enough, and unless it’s a poison or accident, I never leave a body lying around when I’m playing seriously. I know there are places where no one ever goes, but I’ve been surprised on that before and I take no chances. I adhere to the Heisenberg Parameters of Perfection and always hide the body when it’s a clear murder.

Now, just inside that door is a propane flask that can be placed next to the trash bin he goes to, so if you shoot that while he’s puking, problem-o solved.

I just planned a good strategy for him, while playing Arcade mode. It looks pretty consistent, and it doesn’t require any alarm or lockdown, the downgrade is that I need to use the Sieker for get rid of two guards, but the rest is doable with a suitcase and two audio distraction devices.

I know the Sieker is considered a cheap tool for some players here, but sometimes the end justify the means.

I hope to get it done tomorrow.

Fair enough, I understand the no-risk approach when its an actual EE. I must try the propane flask method, thanks.

At the last resort, there is always this strategy, as illustrated years ago by @Fuzk : I want to drown him, but I am not sure how many NPC’s I need to poision in order to lure him into toilet. I know when I first poisioned him he went to bin in garage.

HITMAN 3 | The Gunrunner | Best Gun Ever? In the end I found a good strategy, with minimal risk, and more importantly no OP item (emetic briefcase) nor abuse of AI (bump into him to keep him in the tunnel as his ecort leaves).

Started as the Elite Soldier.

Emptied the tunnel of all soldiers

Pulled a bit of a sneaky on everyone

Because as I discovered, if you do that the target arrives at the lockdown point with twenty-thirty seconds of him alone before the rest of his (only two) escort arrives. Screenshot from a test run : 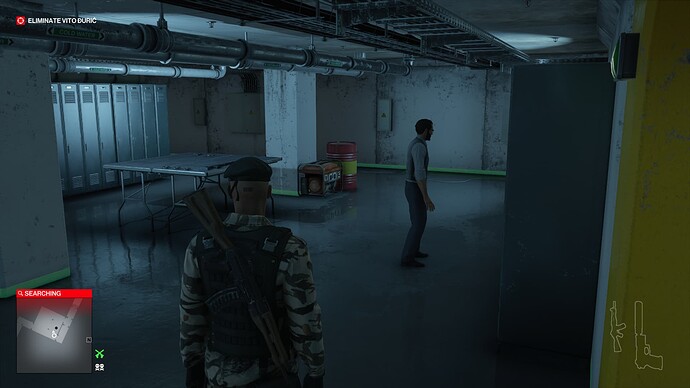 So, implemented in the run :

The body is found a few seconds later, as 47 exits.
Silent Assassin. 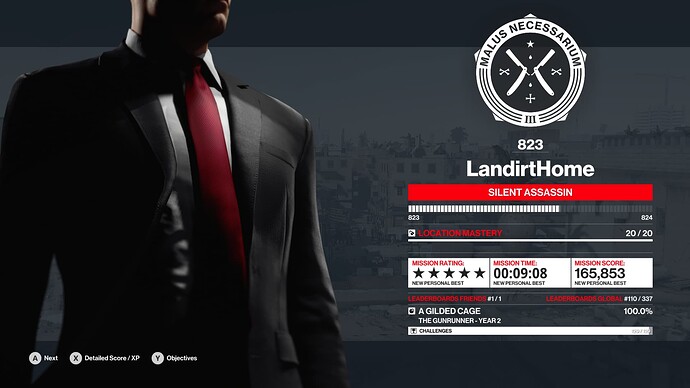 It’s a bit of clickbait actually, because no one saw him get syringed, but I still killed Vito in place on the garage, without alarms or target lockdown.

I’ve decided I’m gonna do something a little different on this go-around with him. I’m gonna bring along a suppressed shotgun and use my strategy described above to isolate him, and then blast him right in the chest with it.

Took down the Gunrunner again, this time with the oil drum in the tunnel. Something I’ve wondered for a while is what’s the point of Diana saying there’s an undercover Interpol agent near the target? Is there some sort of “mission story” related to this?

It was just to throw people off; a red herring. Make players a little more nervous to think that there was some additional factor involved, but there wasn’t. They punked us. In a way, it was kinda funny.