Richard M. Foreman is back in Colorado for 10 days as a proper elusive target. 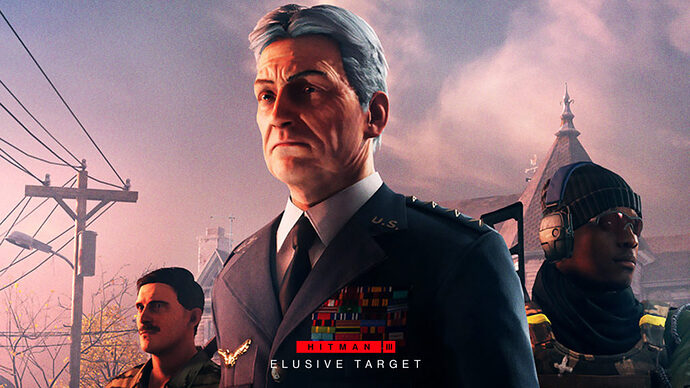 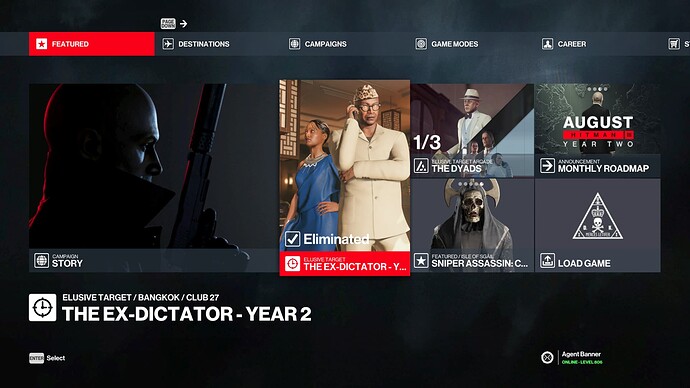 They’re overlapping, the ex-dictator won’t leave until the 23rd. When the Chameleon comes out, it will be there instead. People like to discuss and speculate how they want to do these missions beforehand, so I’m posting 48 hours early, although I’m surprised there’s no in-game countdown yet.

This mission is important to me. I’m trying to decide between poison or falling. Both are very viable and relatively risk-free for this guy.

When i did him originally in Hitman 2 i shot a sieker at him and safely drowned him. This means a lot to you. You need the hat or 47 will get sunburned.
If not i’d do falling as he naturally goes near a railing risk free, as you could accidentally do the pinch glitch with a syringe.

I considered that too. If I use the sieker on that one hacker that uses the laptop, he runs off to the bathroom, leaving not only the laptop open, but the target then goes to the railing on the balcony. Sort of a two-fer.

If you implied i said about glitches your half wrong i was merely stating that the poison syringe might cause the punch glitch on him thus not giving you a accident/poison safe kill. If you were not ignore this.

Yeah, misunderstood what you meant. If I were to poison him, it would just be via the water bottle on his desk. Using the same technique to get the guy on the laptop out of the way opens up the water bottle to an easy poison opportunity. You can be standing at the exit when he actually dies and just walk out.

I did about 10 or so practice runs last night and did a few by poison, a few by falling. I’m leaning towards the poison, only because the last time I tried an Elusive Target in Colorado, it was the escape from the level that got me. Pushing him over the balcony does risk getting spotted by the guards on the ground.

Do whatever, when you said you’ve been practising how were you playing him as ain’t he in a restricted loadout eta? Or did you Peacock?

There is a mod for the PC which enables all of the Elusive Targets (including the Busey and Bean ones, by the way) to be played offline. The code for all of them is in the game already. IOI just has to unlock them.

Ahh ok, fair enough. I play on Xbox so i don’t have the modding luxury.

It is genuinely a shame that the different platforms have different opportunities when it comes to that.

Gonna bring in a tranquilizer gun to get rid of one guard, then push the son of a bitch off the 2nd floor balcony. Don’t even have to knock anyone out for a disguise, so, I’ll be able to easily hold to my parameters of perfection.

Are you referring to the disguise in the trailer or just doing it without one? I always seem to get spotted changing into that.

I always seem to get spotted changing into that.

I personally have never, in all my very rare cases of playing Colorado, been spotted putting that disguise on. The only thing i could think of why your getting spotted is maybe your on Master difficulty. I don’t play oh Master difficulty as i save scum and i can’t clearly do that on Master. Master difficulty is for SASO/SNOKO runs only.

What @Charlie_Farmer said. I never get spotted either. Mind you, you need to wait for the guy with the clipboard to be out of sight first, and then walk as far into the trailer, hugging the boxes as much as you can, before switching, to minimize how much the guys standing behind you see, but they should never even get question marks above their heads.

Anyway, yes, I mean that disguise in the trailer, and the one in the barracks where the Point Man is; I change into that one first since it’s the quickest to get to without exposure and has fully-fingered gloves, then I go to the trailer from there, knowing that I won’t have to worry about being seen so long as I stay away from enforcers. Colorado sucks for following the HPP for direct kills, with too many guards and not enough containers to place the bodies in, but it’s great for accidental kills.

@Heisenberg, i’m thinking about doing your playstyle, maybe for the Chameleon? I need to reread the rules but i’m sure it’ll be fun!