I’m willing to remake this one on Xbox

oops i @‘d the wrong person

This mission might also make it easier to understand Florida Man’s route for any who are having trouble finding him in Berlin for the challenges related to him. 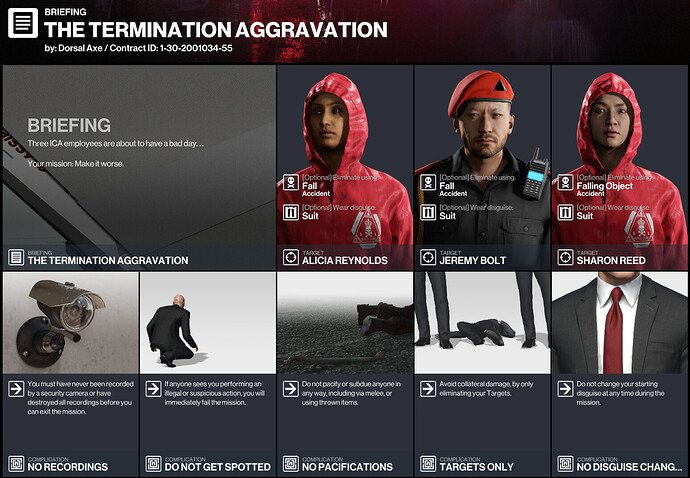 This is a sort-of puzzle contract that’s based around the AI routines triggered when you fire the three employees. If you’ve never paid much attention to what these NPCs do after they’ve perform their predicted action, you might be surprised what happens…

You’ll have to do this contract in just your suit, without knocking anyone out and without being spotted. It’s not as tough as it sounds, but it does require good knowledge of this area of the level. Sneaking around undetected is a puzzle within itself, which inspired me to make this. Good luck.

EDIT: I’ve remade the contract, new ID is above. I think the game bugged out when I made the original because, apart from the time limit, some of the non-optional objectives on the menu were showing as optional once the level had loaded.

Sometimes the time limit is needed just to focus or rush the player
P.S. I’ve never seen him used this way, I myself thought

To be honest, the time limit was by accident.

I didn’t set it as a condition, but it somehow got enabled anyway. If only we could edit these things…

I guess I could make a new one, I’m just worried about taking all that time just for it to happen again.

EDIT: I remade it since there were other issues. Edited my original post with the new ID.

Made another set of escalation contracts 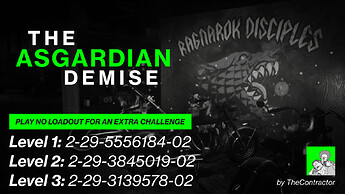 Lo, Ragnarok is at hand. May Odin’s subjects fall.

(For an added puzzle, try No Loadout)

Did you mean to @ me instead? If so I’d be honoured if you did, send me the level code in a private message and I’ll put it with the PS4 one above or just reply to the PS4 one with it, whichever works for you. 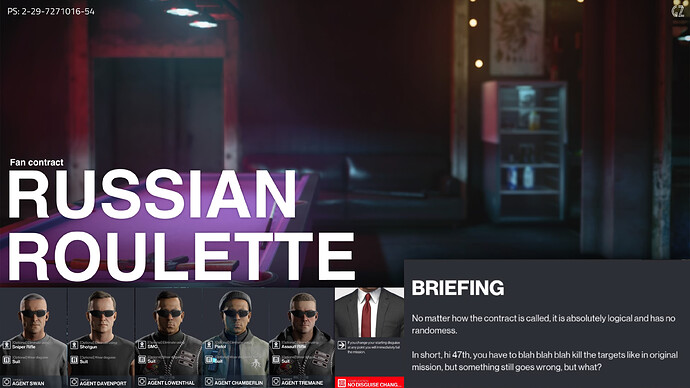 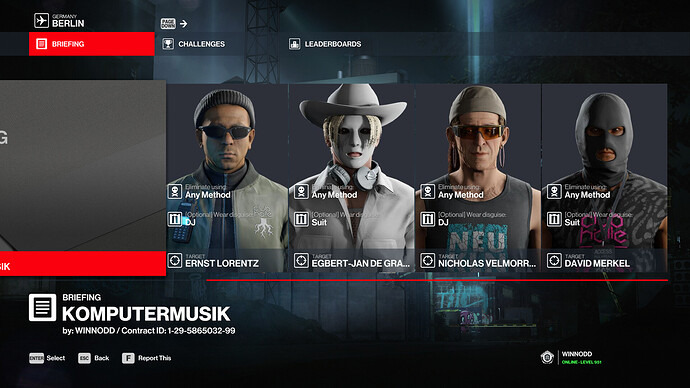 This contract is based on a new feature I just found. It could be a easy sniper puzzle contract if you know the feature. Please enjoy！
Edit: No, not Arctic wallbang.

This bug is present on Xbox. I can make Mendoza contracts, but I can’t play them. I reported it in the technical support thread several days ago, and you should as well. Hopefully they see it and it gets fixed soon.

On another note, I’m also annoyed that they did not do what they did with The Constant in Isle of Sgail and just allow us to make contracts with Diana as a target. Maybe I wanted to create a contract with a story where 47 is tasked with finally taking out his longtime handler (for real this time, Absolution).

I also found a lethal food in Berlin so I made a contract. 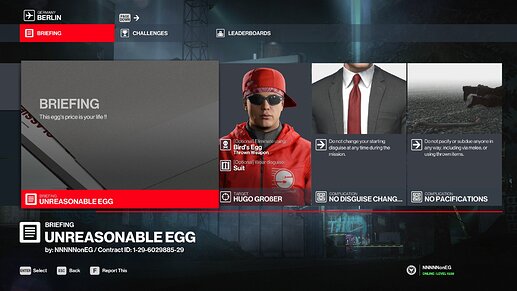 I haven’t made one in a while but here is my first contract on the new maps!

Someone has to do this one eventually, might as well be me. These are the 5 people you can get to follow you as the dealer to get each disguise in the main mission. To my knowledge there are only 3 others you can ask and they will all refuse. It should be a pretty easy contract to get SA and some of the targets are very easy to get even without the follow mechanic but it can be fun to find new death traps to lead them to regardless. I kept it simple with no kill methods or complications because I just wanted the focus on the follow mechanic, lead them to whatever creative kill you wish!

The fact people have completed this in 3 minutes is amazing to me. But then again I’ve never been much of a speed runner. Really nice contract though, I look forward to any you make in the future!!! 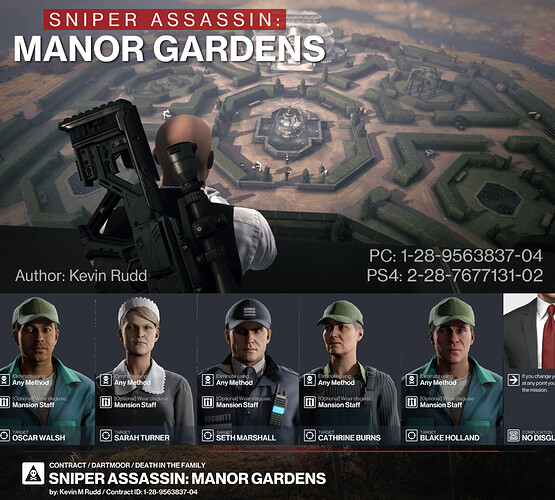 MissionPromo1920×1728 1.07 MB
I had some cool kills lined up for this, but turns out the pools of Dartmoor do not at all hide bodies, even though the player can’t see them. So I had to replace those kills with two pretty easy ones 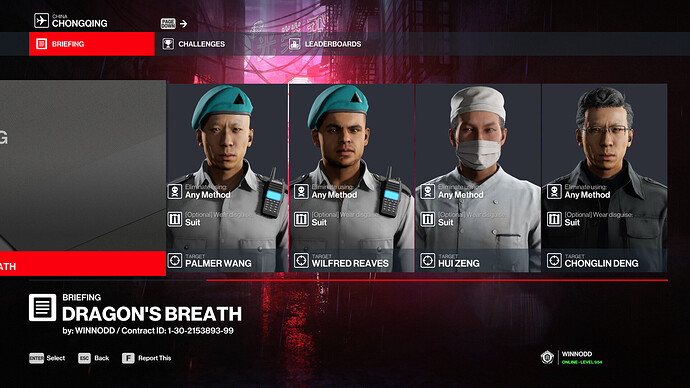 Here is my first H3 contract. I reused a concept of a late H2 contract that I think was my last good one but went below the radar (“IV Bagging”). Luckily the concept here is more straight forward, has more interesting twists, comes with tighter timing and requires good map and mechanics knowledge if you want to save some time.

The nobility mourns the death, knowing that whoever is believed to have fallen may rise again. And if it is only briefly to punish us for our deeds.
Let us raise the glass to the dead. May they be merciful to us.

(First target on balcony of Alexa Carlisle’s office, second target in front of the office in the corridor)

Yeah pretty decent contract. I’m sure some speedrunner could do it faster but

Yeah, interesting idea but a little too finicky for me. Liked that one of the weapons had to be unsilenced and it was really up to you which. Think the same concept but just people in the garage building would be cool 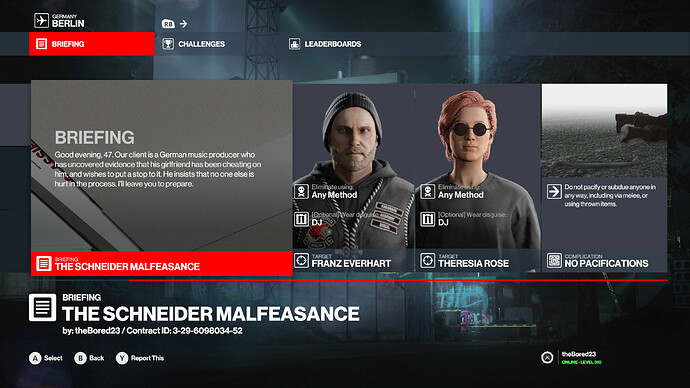 9ba2e3af-b6c1-4761-bce8-5f631a0088013840×2160 1.03 MB
Something I’m wary about with Berlin is giving players a reason not to start as the biker every time. On this one I probably could’ve left the disguise open for players to choose; it’s pretty short and the additional distance would make bikers less feasible for speedruns.

My fear in general is that the biker’s ability to go anywhere and the lack of enforcers in the club will make that the default starting location of choice if I don’t require otherwise.