Can you cause an Accident Fall for these five targets, without pacifying anyone or killing anyone besides the targets? 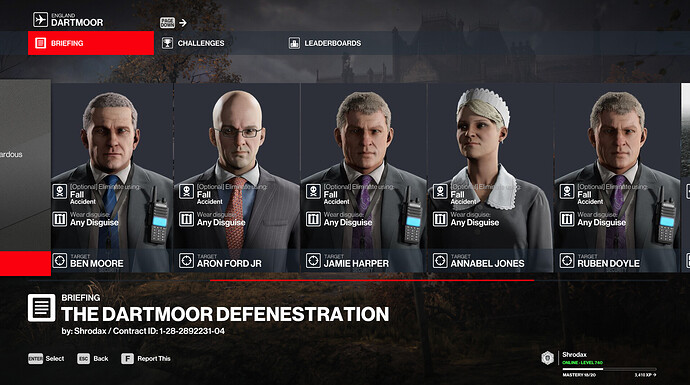 Who knew that leaving the windows open could be so hazardous to one’s health?

I’ve picked 4 targets for you to kill with Consumed Poison. And Agent Rhodes is a 5th target for a very special reason. (He’s carrying a bottle of Lethal Pills that you’ll need since you can only bring 3 poison bottles with you at the start.) 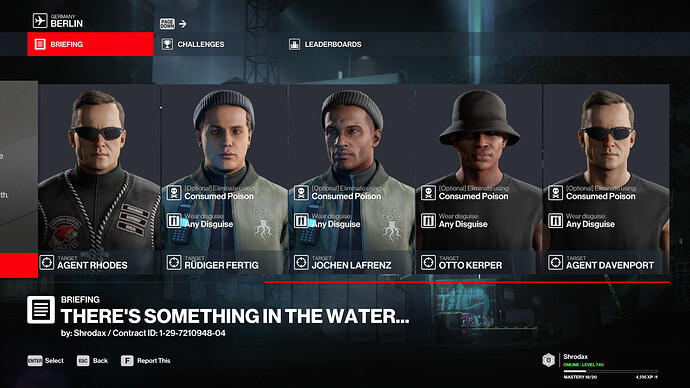 In hindsight, it probably wasn’t a good idea to build a club on the site of an old nuclear power plant. A lot of nuclear waste has seeped into the area’s water supply.

My very first contract in H3. Completed in 2 mins, but I guess all of you will find another faster strategy… 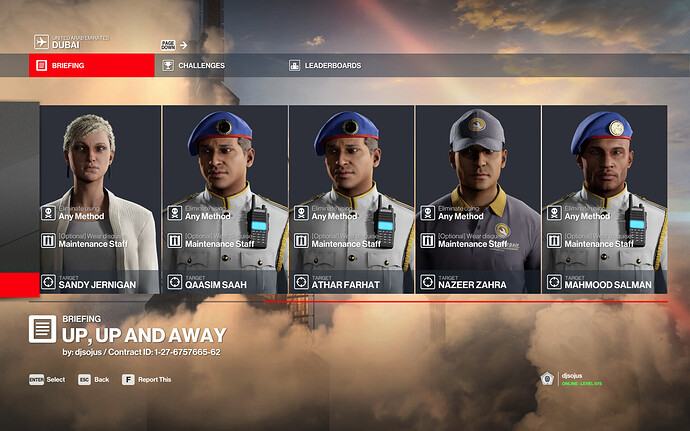 Decided to recreate level 5 of the HITMAN escalation ‘The Susumu Obsession’ set in Hokkaido seeing as it’s not in Hitman 3 yet & I think level 5 makes for a fun little contract. 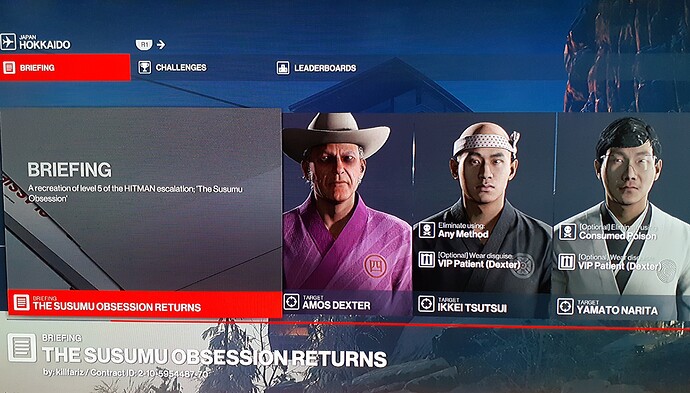 I made a fun little contract that’s easy once you learn the neat trick: 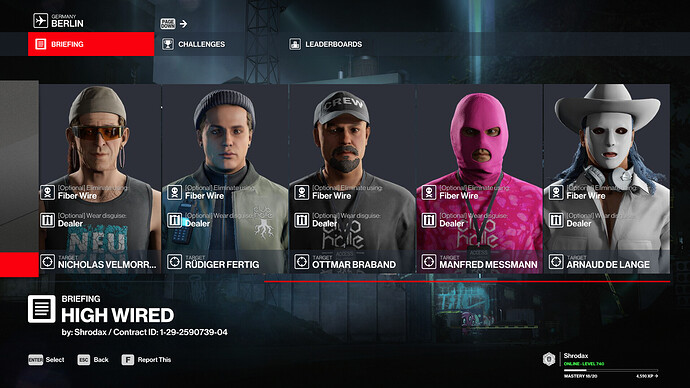 These new drugs are really getting their users… wired.

I remade my Angry Bird from H2 with a different title since there is a challenge now with that name. @Franz

Also I changed it a bit. No more hidden body as the E-Phone is gone. But instead Electrocution so you have to experiment with what is around the target. It also makes speedrunning harder if you want to set things up first.

Exit is the helicopter, not the Easter Egg exit.

Targets down. Well done 47.
Meet me at the helico-

What the hell? What is this thing? Do you expect me to be seen at the base with you wearing THAT? Just when the others finally stopped calling us “Love Birds” after New Orleans?

Oh no, certainly not! Go get something else and then come back. 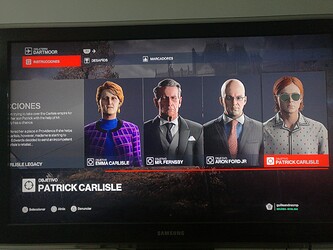 Alexa Carlisle has hired you to kill the conspirator Emma Carlisle and her helpers. This is the first contract I upload to this forums, please don’t be too harsh.
I don’t know if four targets was too much, that’s why I didn’t put any weapon and disguise condition. Tell me what you think

Complications: No pacifications and no disguise changes. I’m a bloody idiot so I accidentally made them obligatory, I’m very sorrry.

They both showed as optional for me. Although obligatory no pacifications actually works really well for Accident Fall contracts like these, because it means you have to get creative and not just easily knock out a target and throw them over a railing.

For contracts like these, coins are a hitman’s best friend.

I made simple sniper contracts in Dubai.

Contract name : Oka Nieba
Contract ID : 1-27-6748592-29
Since the elimination method is Any Method, it may be faster to start with event security etc. 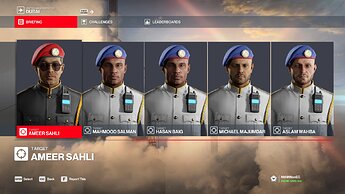 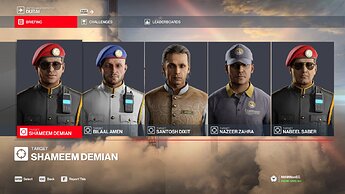 I really need to see a video of you doing these contracts, because that 90 second time limit seems way too tight. I got “Ballistic Seconds”, but the others seem impossible to accomplish. I’ve done “Shocking Seconds” SA in 1:32, but I can’t shave off that 2 seconds to get the time any lower. And “Explosive Seconds”… how can that possibly be done in 90 seconds without any bodies found? 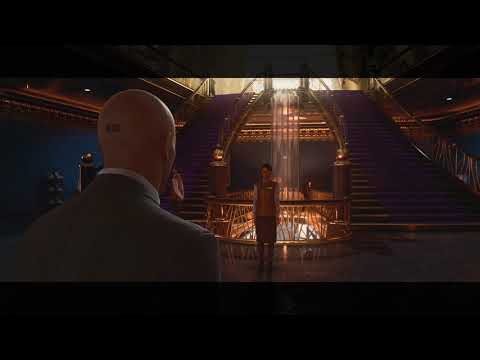 Omg you are a machine! 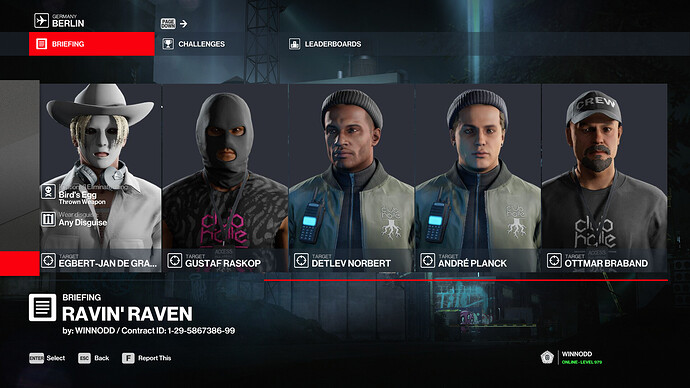 Just to be clear, the title has nothing to do with raven suit or rave on suit.
The solution: 【杀手3】自制契约：Ravin' Raven，1min30s_哔哩哔哩 (゜-゜)つロ 干杯~-bilibili

Your target is Viktor Novikov.
<insert Paragraph about contract justification>
You are required to kill him with the light rig. Good luck.

(Because of pressure from the agents’ union, no shooting or blunt-force attacks may be made on extras) 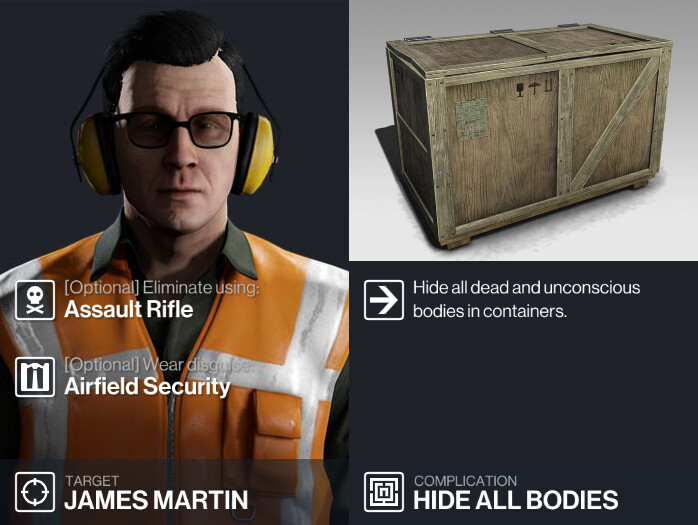 [Initiate’s log #23]
I snuck into the organizational wing and reviewed the test parameters. These are very detailed and yet the code I found is never mentioned. Just as a broken Fialka cipher machine which is placed on the test site. Maybe the code itself is random and is meant to motivate me to examine the machine more closely
[Initiate’s log #24]
I opened the machine today. I found live ammunition and the identity of a mole. My first assignment.

The bag suits you

Your modus operandi is becoming apparent to the authorities. Despite your flawless work, it will be increasingly difficult for you to continue. Be it as an unknown, new employee infiltrating the building and then disappearing, or leaving unclothed bodies behind.

How about classical infiltration? Or if you really need different clothes, bagged bodies are less suspicious if they lack their clothes. 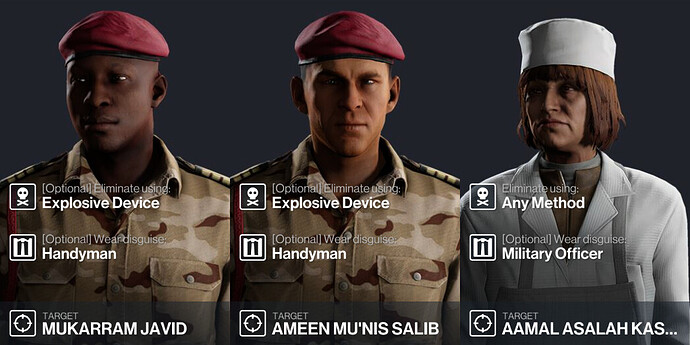 The situation is critical. Not much is needed until one side collapses under the pressure of the other. Will it be the military? Or the people? What act will cause the spark?
The decision could make history. But does it really matter how the tinderbox is lit? Isn’t it obvious how it will end? And isn’t that what everyone is afraid of?
Maybe the act is to not act. The sane act of humanity. Which makes it obvious why you are asked. Because you are of the same kind as the people who pay you.

The explosive trick is mainly the mechanic that the breaching charge counts as explosive device but is silent, so it’s only about running away before the last bodies are found 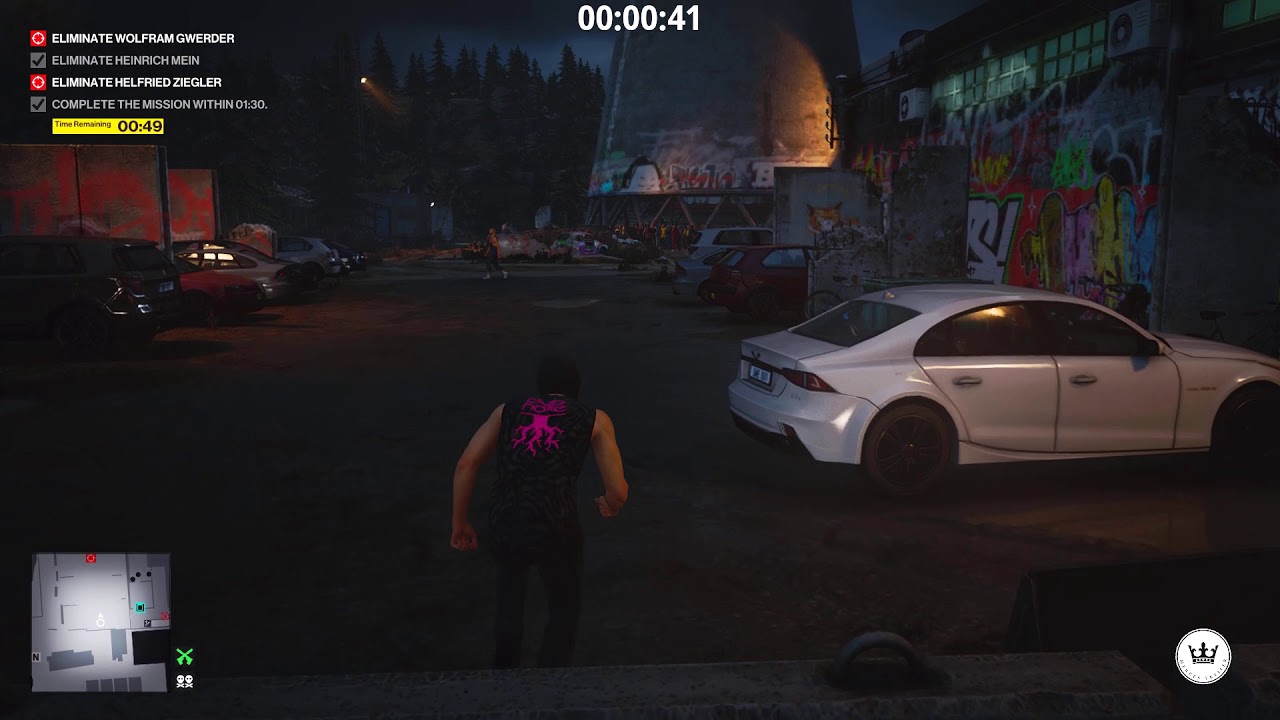 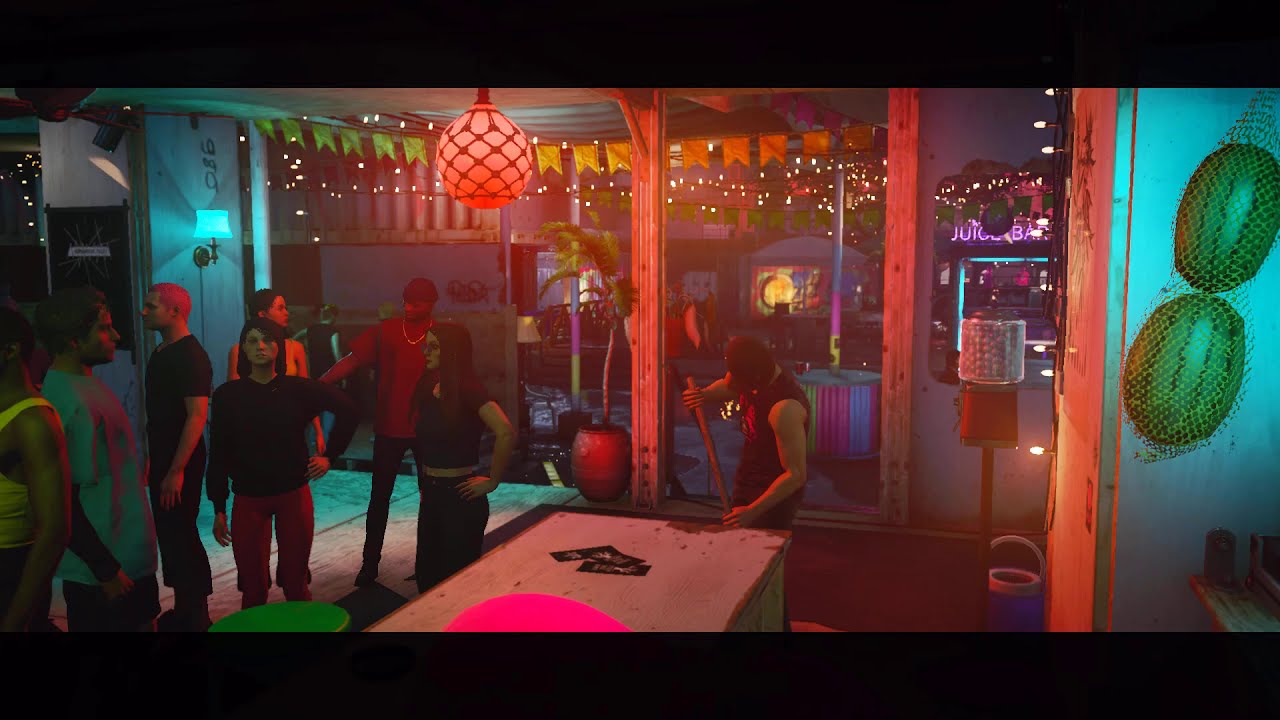 Nice contract, by the way! I learned a cool shortcut to get to the drug dealer quickly that I’m gonna use a lot from now on

Got a less than 5min run! 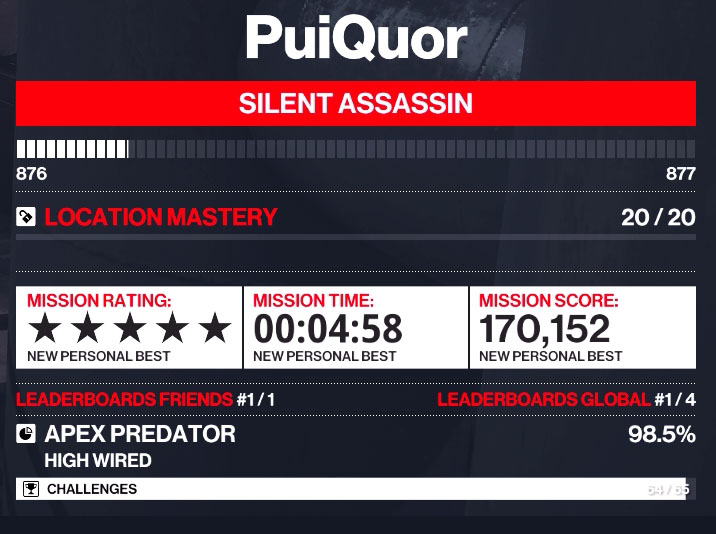 Neat, I didn’t know that Heinrich would go to that bathtub when using an emetic on him. Here’s the strategy I kept trying for “Shocking Seconds”, but couldn’t figure out how to shave off that last 2 seconds because Heinrich’s timing kept being completely wrong: 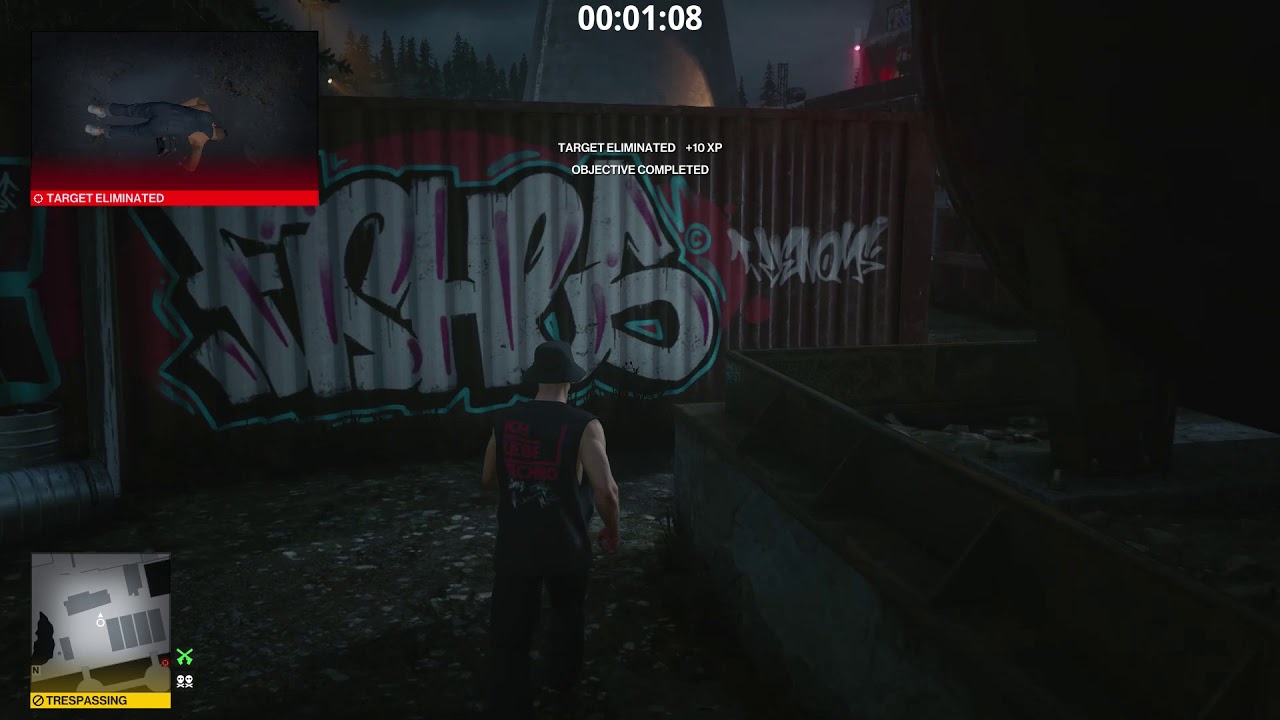 In hindsight, I probably should’ve known you couldn’t have used the club entrance starting point because that shortcut on the back of the club would’ve been locked in contract creation.

There are really 2 quick ways to get to the drug dealer. You can approach him and ask to buy drugs and he’ll lead you to a nice secluded area where you can take him out. I assume that’s the one you’re referring to? But there’s also the ol’ “Remote Explosive Emetic Device in the Briefcase” trick that’ll make him go vomit in the nearby janitor closet with a convenient body locker in it.

Damn, that 1 second too late exit!

Here’s the run. The shortcut I mean is right behind the Projection Bar starting location. ~40 seconds to get the dealer disguise. Very useful for other runs! 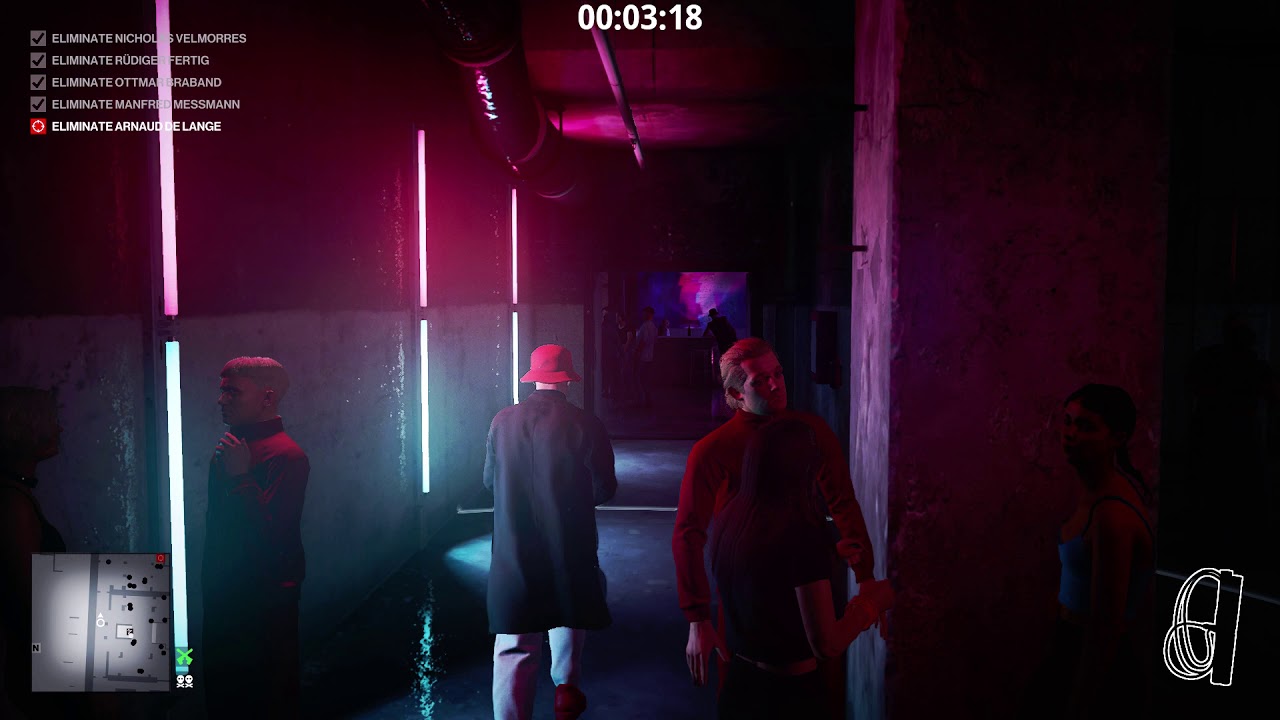 Actually, learning about the existence of that car battery was the game changer I needed. Now I’ve got the contract completed in 1:11 using the same basic strategy I was attempting before! 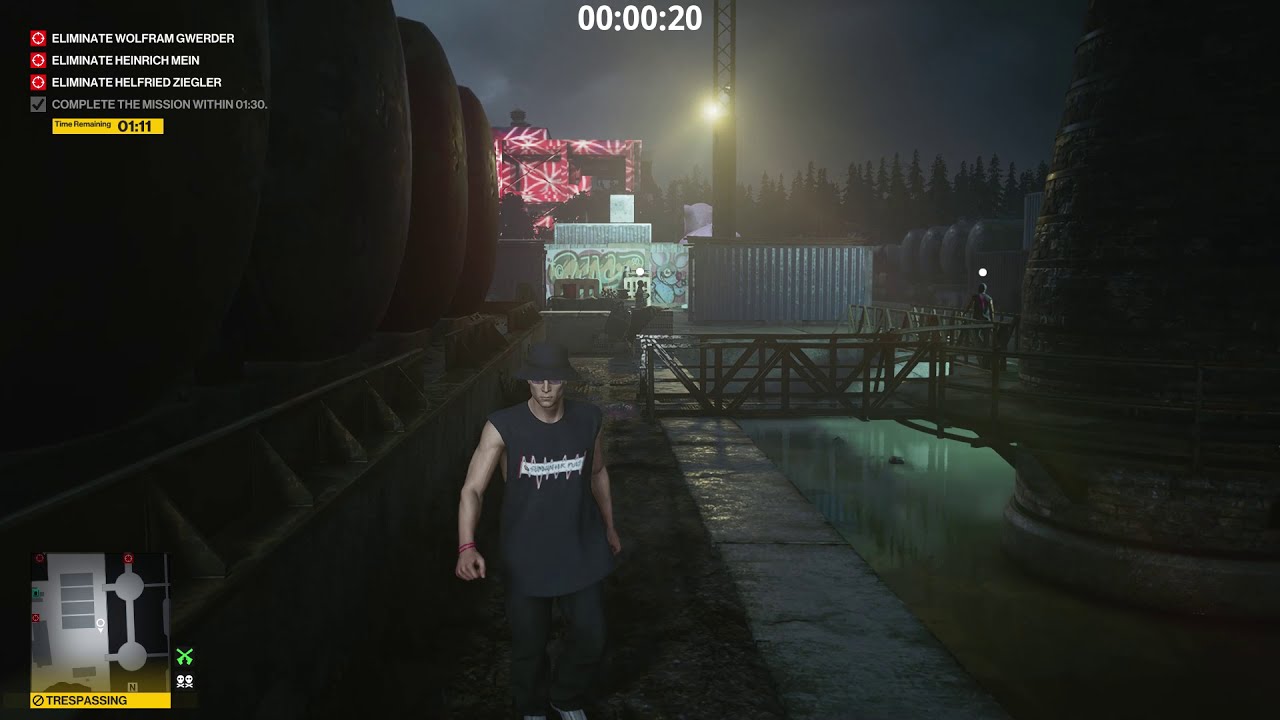