Ok, I’ve got this one down to 2:50. But I have no idea how it can be done 30 seconds faster. 2:20 doesn’t seem to leave enough time to do everything you’ve asked in this contract and still escape…

Unless you have very specific reasons for certain complications, I think they should always be optional. Especially the “Do Not Get Spotted” complication - I hate the mandatory auto-fail version, because sometimes I don’t even get to know who actually spotted me and thus don’t know what to do differently on the next run; leaving it optional at least allows me to figure out what went wrong.

This is a good point. Will take that into account from now on. 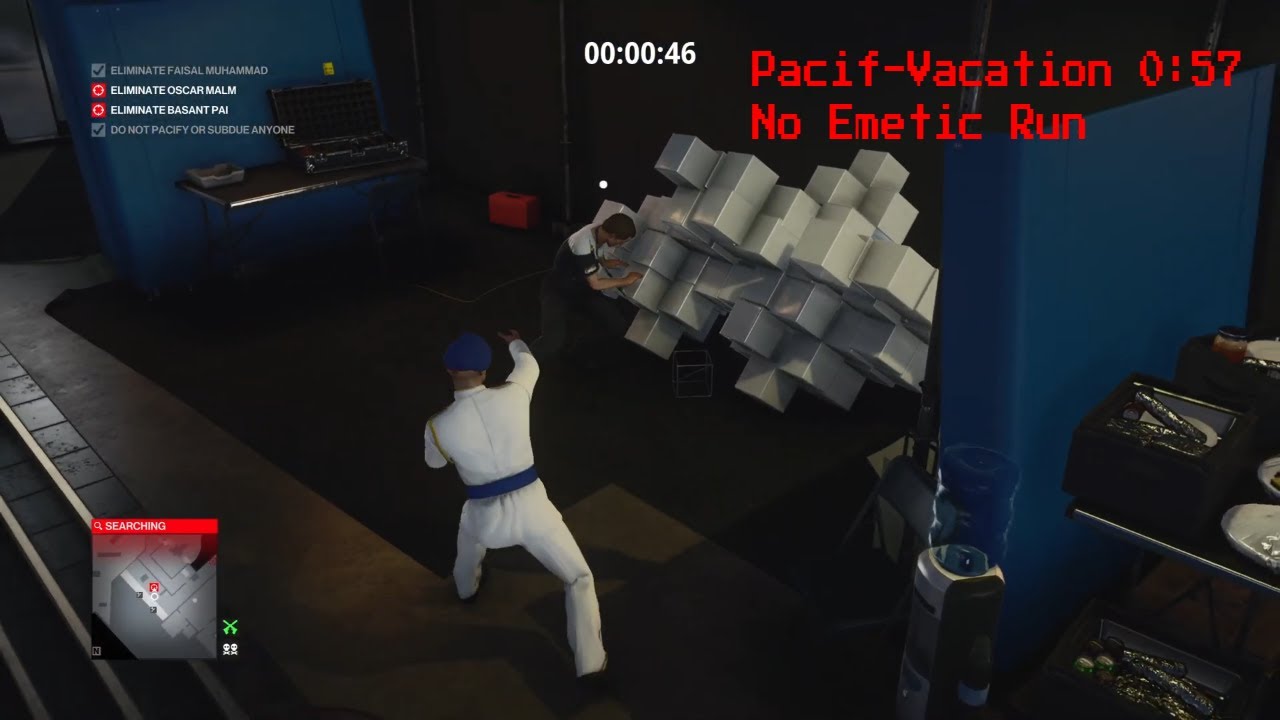 Damn that was impressive, cheers for playing

More recreated contracts. Not all are speedrun friendly, some are one-trick contracts, some are generally decent. I hope.

Aside from the H1 Featured Contract batch I intend to recreate at some time, this is the last flow of old contracts. @Franz 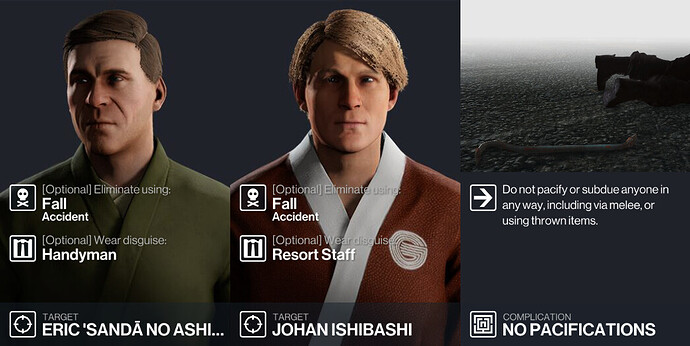 Tobias Rieper gives a party for his followers!

There will be music, dancing, playing tag, and getting high! Or was it low?

The interbreeding of plants produced the most amazing species. Amazing for some, unsettling for others.
The client, a local business partner of Jorge Franco, worries about losing his job as a subcontractor, when Franco’s new drug is finalized.
Your mission is to eliminate botanists working on the drug. It is also suspected that one of the personal bodyguards is involved in the development. He also has to die.
The client pays double if the plant in the lab is destroyed.

Smog On The Water

Female servants of Vanya Shah receive food and shelter, in return they commit themselves for their entire youth. They also get the chance to be married to Shah’s wealthy business partners. A soon-to-be candidate is the Maelstrom, so such a day is approaching.
However, who loses her virginity recieves punishment. Also, since Shah is never revealing her knowledge until the next marriage, the service continues with constant fear. So one is not only hoping to marry, but also to survive that day. 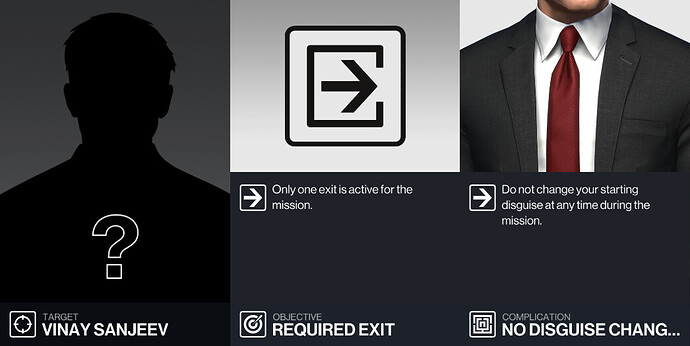 Give him a taste or give him a ride!

Each wing of the hotel accommodates a couple. Not absolutely secret, but absolutely forbidden.
The partners of all four targets, who are curiously part of the target circle themselves, want to see their partners dead. Probably to continue their own affair. Crazy situation. Other agents would have to decide for one of the assignments, but I’m sure the reward of only one contract won’t even get you out of the house.

Thank you for the tags Urben!
I’ll try recreating them for Xbox and keep you posted here.
Emphasis on try! Because in order to recreate them, I first need to figure them out

I added target locations at both posts so that is a bit easier.

@ me when you have IDs I can include. 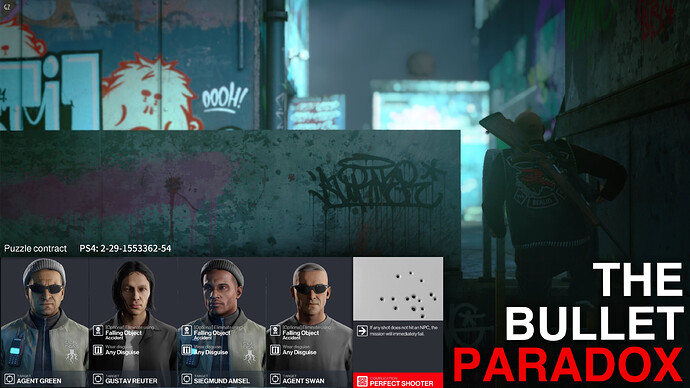 Description:
I don’t want to say anything, but I hope someone will find a solution

But the contract is to do that as the bohemian after killing him with consumed poison, is that just to give you something to do while you wait

I made this contract simply to shed light on this unique situation, but I had to find a way to naturally keep the player around for long enough to witness it. My thinking was that by the time the player gets the required disguise, they may then go back for the second target, just in time to witness the chain of events unfold.

I just realised, the electric phone is no longer available and no longer offers a free kill on the main target! Nice!

Edit: okay finally solved it, spent way to long trying to push Green onto the other guard like the Viktor/Dalia kill

Well nice work, you managed to show me something new in a level I’d played so many time before (not so much Landslide but Sapienza in general).

Ive got the solve, but this triple kill just isnt working out lol…

Well nice work, you managed to show me something new in a level I’d played so many time before (not so much Landslide but Sapienza in general).

but this triple kill just isnt working out

I only double kill Swan and Gustav

Ahh yes… I thought this contract was a different puzzle. Turns out what I’m doing just adds style points 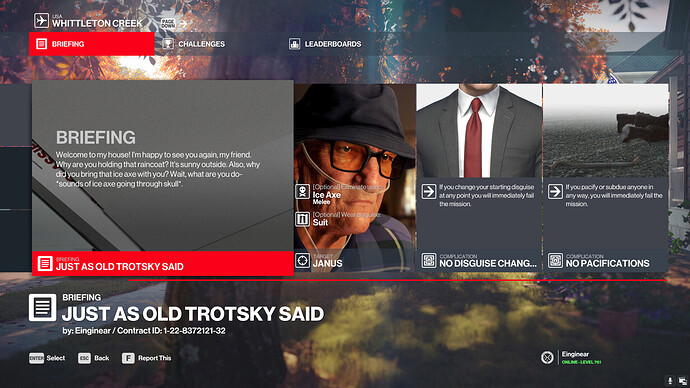 So when new members who’ve been playing for a while and come to find or share contracts they’ve created click on the category - it’s right there for them to find.

I made a flowy, lovely Dartmoor contract! Take a looksee! 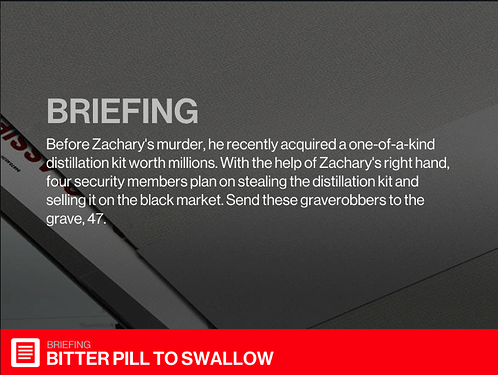 All targets can be found throughout the garden, hehe

My most tricky accident kill ever. Tried repeating it, but failed every time.