That’s an interesting take. The 007 game could still have unique missions though. Maybe a driving mission or two. It could also be more cover based when it comes to shooting. There surely has to be a little more shooting even if it’s just a level or two. I am interested to see how it shapes out but I kinda think it will be less sandboxy and more linear with maybe one sandbox level where all of us just say “oh it’s a hitman level in a bond game.” Looking forward to it in any case.

Unsure on driving as they would have to develop a whole new engine for that or heavily overhaul Glacier with that support. But Cars are now part and parcel of Bond so perhaps they have that in development or getting third-party for that engine (Sumo Digital does have experience in Kart Racing games

Reckon it will be more Absolution based in structure with a few modest sized Sandbox levels in -between the set-piece areas. Given interviews mentioned that the rights-owners didn’t want Bond to be gunning everyone down reckon a mix would work best , given the early part of a Bond film has some element of social stealth to it.

If they want to do a trilogy for this series and self-publish I think they will likely release the game with a free-pack which includes the home-hub (Q-Branch, Jamaica Home etc…) and from there release extra content and missions to connect more smoothly compered to the Hitman trilogy.

Project 007 is explictly told to be worked on Glacier on the job listing on ioi.dk

And vehicle are hinted at, but with the added caveat that IOI seems to still be on the “concept testing, prototyping” stage. So subject to change, or not kept. 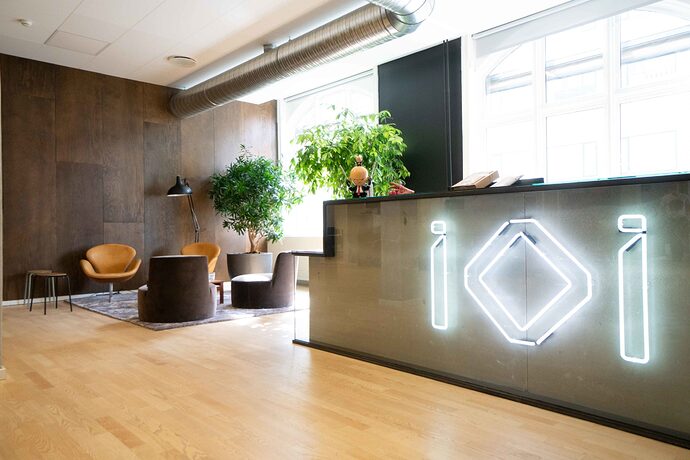 On the Freelancer will be used for prototyping, I agree with @Heisenberg.
I also think that, depending on who is working on it, in which studios, it might also be a way for IOI to iron out their communication, their inner working, and management between international studios. Not an easy task, and a medium size project is a great testing ground. Also works for Ambrose. But we will see that when we will have a look at the credits.

My wishlist for Freelancer:

I like the 2nd and 3rd bullets.
Number 1 will never happen though. It’s a lot more complicated than just changing the ambient light in the sky. You have to adjust the number of NPCs, change the lights in the buildings, signs, etc., move routes around (unless we’re OK with just having the exact same level but “darker” for a night effect). It’s effectively a different map, just with the same structure to be convincing.

I forgot about agent Smith randomly being in danger in each final campaign mission. Your rescue him, you get bonus merces.

That’s also a lot of work. You’ve got to place him in a feasible location, place guards nearby, put a key somewhere, include hints as to his location and so on. To say nothing of routing people around that location or towards it.

You could pace him per map, but then he’d just always be in the same place in Paris, same place in Marrakesh, etc. To truly have it semi- or even truly random, they would need to generate Smith procedurally, and I don’t know if that’s even possible, much less feasible.

The only other way I could think of would be just add him into a few places per map like the clues in the Lust escalation. There are only 12 or so places where the clues can be but they are randomized each time you play. They could probably figure out 5 or 6 places Smith could be and then just randomly choose one each time you start a campaign. Eventually you’d probably figure out all the locations though.

Well, with Ambrose Island’s release now firmly in the rearview mirror (we came, we saw, we killed their asses), we are now full speed ahead to Freelancer. How many months do you think we’ll have to wait for it? 2, 3, 4, or 5? Or will it maybe be delayed again and IOI forced to make it part of Year 3, along with that airport in the snowy mountains map pipe dream that they’ll definitely release next year?

From their previous blog-posts, it sounds like they are pretty far along. They’re just using their playtest feedback to make it even better. So I see no indication or reason as to why they would push it to next year. My guess, which I have absolutely no evidence for… October.

along with that airport in the snowy mountains map pipe dream that they’ll definitely release next year?

Since they usually do patches every two months, September or November seem like the most likely months to release it. I do think they’ll have it finished in 2022, especially now that Ambrose Island is finished and the team can focus more on Freelancer.

Given how far along the mode seemed in the January reveal, and how the delay seems to be for improving already completed elements and not designing totally new elements, I predict September is when the mode will launch.

It’s ok, they can take all the time they need as long as they release anything big!

I was going to read the entire thread since i got into it but i’ve decided i won’t. I’ve seen the news of the Freelancer mode like everyone else, but i have absolutely no idea what’s it about. Wait and see! Skip to 8:04, and it’ll explain Freelancer, and you’ll see why we’re so excited. If what they showed us is what we think it’s gonna be like, then it’s practically a Hitman 4 built into Hitman 3, as it’s pretty much a whole new game’s worth of content to play that chronologically takes place after the end of H3, and sort of combines Contracts Mode, Escalations, and Elusive Targets into one, but all new stuff, not just rehash.

Watch the video from the point I mentioned and you’ll get it. Don’t worry about ruining the surprise, you’ll do yourself more of a service knowing what’s coming, and there are still many questions left that won’t be answered until it releases, so you’ll still be surprised along with the rest of us.

I hope that once Freelancer releases, it is featured on the main menu page instead of being tucked away in the Game Modes menu.
I consider it to be an entirely new method of Hitman gameplay, much different from just escalations, contracts or ET Arcade. 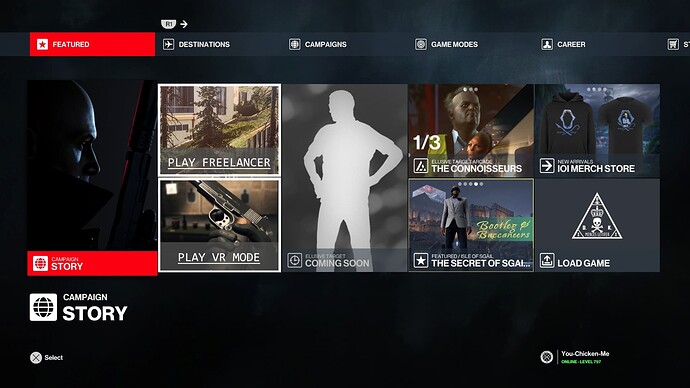 With this layout, we can consider the base HITMAN experience to be divided in 3 gameplay styles:
The normal Campaign/original WOA version, the first-person-interactive VR version, and the rogue-like Freelancer version, each offering their own tweaks to methods of interactivity & gameplay systems.
I can’t totally say why Sniper Assassin wouldn’t be there and why they’ve tucked it into the Game Modes tab, but for the sake of Freelancer – which might prove to be much more popular (and offer more longevity/replayability) than SniperA, it should be placed front-and-center.

I like what you have done, but there is no VR on Xbox, so I have my doubts that will make the featured page. Just playing devil’s advocate on that one.

I agree Freelancer needs its own tile, instead of being temporarily buried in the scrolling What’s New tile like Ambrose Island currently is.

If VR mode isn’t available, the Freelancer tile could be tall like the story tile is.