If you shoot them, which I did because I don’t make things harder on myself when I can just shoot cameras out, the sounds travel through walls as @misterkiller said.

I only shot the camera at the back entrance (where the trash cans are) and assumed it is scripted for one guy to check it. Like it was in 2016 Pro mode.

No, that’s a bug.
The same bug you can replay in Bangkok shooting a camera in basement. Some woman sitting by the bar on a terrace will go down check the noise

I have run into that

I lost a little time because of the excitement - only one chance and I was not even sure if the guard had seen the murder (the tranquilizer is very unreliable). But everything went fine. 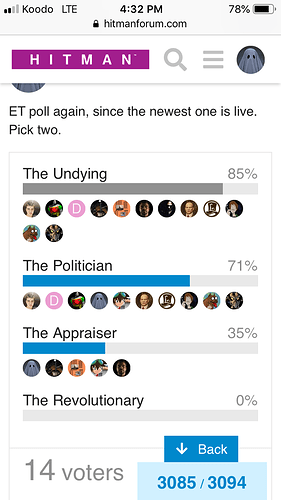 Never knew the tranq gun was this useful, nice run

Yeah, had I know it would get no love, I would have voted on it too. It was a real challenge getting that poison into that glass without getting spotted.

Agreed with @immadummee47 there. The safehouse is designed with many walk-on roofs and open balconies and the cameras are mostly mounted along the edges between these areas.

The sound is always bound to pass on more sections than expected. This also makes sense accounting for the use of Volumetric Cubes governing the passing of sound as the safehouse is relatively small and “pass on logic” could criss-cross across such a small volume.

I see nothing wrong there. And for Hawke’s Bay it’s so easy to evade cameras it’s actually more slick just to leave them untouched if you ask me.

Theory:
Guard behind Barbara Noticed the Kill but could not go to Body Found.
You should have shot Barbara maybe 0.1 seconds later… I guess.

I had been noticing that HITMAN 2 has been playing a lot of games with NPC Status Stacking and I think you got caught out by that in that kill.

A) it makes no sense for the guard that gets distracted by this to be the one that becomes distracted (even with your pseudo-realistic description of soundwave movement).

B) This guard still is the one distracted even if I don’t KO the first guard before shooting the camera (0:50 mark)

Am I the only one who didn’t know that you could drop down from the roof to the second floor, like this
1:10

Well, true this particular behavior is not ideal. But I doubt it’s the cameras that are broken.

This guard is the one that patrols the outer perimeter of the house at the start of the map’s routine and then eventually walks through the door beneath the camera you shot.

It is possible he is retaining some kind of persistence with the Volumes in this area because “it’s his watch”. (Note: We also know IOI use exception flags for guards that should not be duped into checking a camera or picking up a weapon, for example, Barbara/Barbara-Double’s bodyguards cannot be weapon duped).

The other thing to note is this door has weird issues. It cannot be closed manually for example, so perhaps there is an issue with its “Closed door/Open door” flag (ie: it’s open when it’s not open).

By default, the door leading to the garage from the hallway behind this door is definitely open which we know usually means sound will be allowed to pass to the next volume.

And for whatever reason that guard is the one with the “?”.

It’s not ideal behavior, but it’s not “cameras broken” I would think, more that IOI messed up (again) on Sound Volumes and Flag Stacking.

I saw a vid once of someone doing this on Alma and Orson by causing a lockdown, throwing down Flash Grenades and then jumping down Batman-style. hahaha.

I’m with you, mate, on this one. Absolutely agree with the description of why this ET is boring and not fun.

Back in a day, when just roaming around Paris, I was finding great opportunities to kill ETs even before first ET was introduced - Sabre here, Battle Axe there… And then we had potential kitchen explosions, chandeliers, endless gas lamp and gas tanks, water puddles, explodable (is it even a word?) cars.

I was dreaming how I’d kill an ET even before they were introduced. But in Hawkes Bay there are very few truly creative ways that feel satisfying.

I definitely want a Mumbai ET because possibilities there are endless.

You don’t need to use the easiest solution. If you find it easy, do something harder.

This is me every time I am about to go into a play session of HITMAN.

My Current Record (All Silent Assassin):

Since I used the Fiber Wire for basically 90% of my kills in S1, I figured I try this time (H2) doing different kills each time to keep it interesting.

I was really considering doing what I did in S1 again, but I’m afraid we will have more targets in the future (like the Chameleon) that ruined my FW streak.

I’ll probably use the FW on more ET’s again in the future of H2. But for now (and especially since they have been so damn easy so far) I thought I’d at least try to keep it interesting by challenging myself to do different kills every time (at least for now, we’ll see what the future brings) because there is no way that I will ever hang-up my FW for good. Not ever!!

But so far; Id say The Politician was my most Favorite ET yet.

THANK YOU! That exact thing happened to me on this, my first elusive target. I shot the bodyguard and he turned around before he got knocked out, ruining my silent assassin.