Always fun to spend more time in Hawke’s Bay. I was on my way to an SA but when I killed Barbara in front of her computer I was caught red-handed by a guard on the second floor who apparently has a line of sight to the computer through a couple panes of glass… no bueno.

One bit I don’t get- if you read the office computer, it says “This document is riddled with editing errors. I believe you’ve found your target.” I dont understand, did I miss a detail that the target was a shitty speller or something?

The Undying: Fiber Wire
The Revolutionary: Poison Flower
The Appraiser: Oil leak/cigarette fire
The Fugitive: Pushed into hot spring
The Politician: Face cut with a katana

The Undying: Subdue & neck-snap or pen through eye…can’t remember
The Revolutionary: Poisoned wine glass
The Appraiser: I ducked myself (failed)
The Fugitive: Distracted into the hot spring -> thrown melee
The Politician: Gaslamp explosion…with support of Sieger Advanced & Ave Maria

There really should could be a topic for these alone.

Since a topic has been made - can a mod/admin move any related posts?

Whoops, that must’ve been posted while I was typing. Thanks

Strangle her in broad daylight .Still get SA because of NPC’S Endless loop. 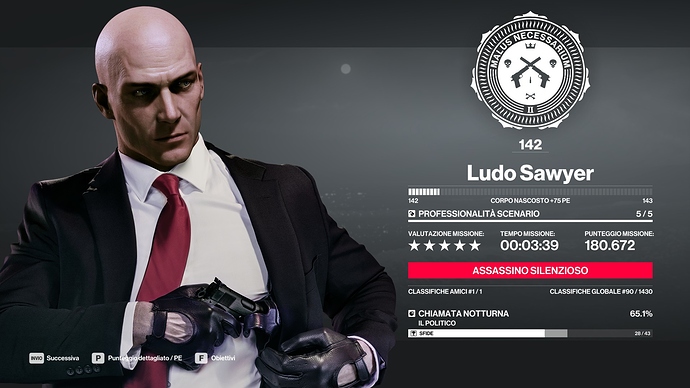 The Undying: PALLAS Android
The Revolutionary: Poisoned Wine
The Appraiser: Burning Oil
The Fugitive: Clown’s Explosive Prank (blew up Ji Hu after giving him an EMP toy while he was ranting about the dumb clown throwing propane tanks around)
The Politician: Gas Lamp Explosion

The only one I didn’t SA was The Undying because I’d forgotten about the Cameras.

Killed her with the exploding lamp after she finished her cig

Oh, yeah, forgot to share.
Did you notice, the guard by a dumpster outside has a key to the house? 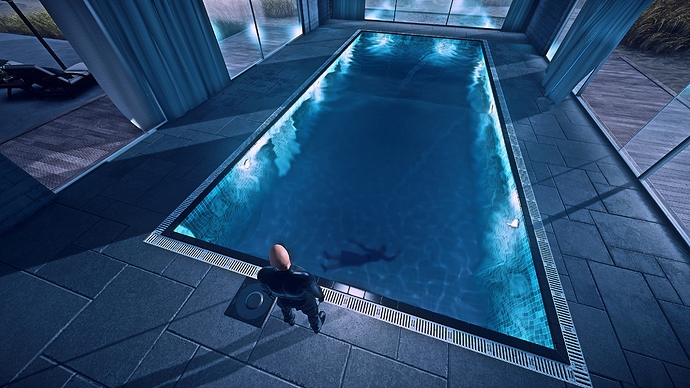 I bet Barbara was ‘blown away’ by your precision.

What a bunch of crap! Set up a nice accident kill, took out the camera. Amazing that guard from outside knows that I ran into the room and hid inside a container long before he was even in the area (watch the minimap closely.) Another failure, but not because of me.

Got an SA ranking playing a blind #TeamNoRestarts run, but blimey I found this the hardest ET I’ve played for a long while. My loadout was Lockpick and Coins with a Lethal Syringe in a Briefcase at the beach stash point.

As expected, this was the first ever ET where you had absolutely no choice but to start the level in an area/diguise where you weren’t allowed to be, and I was fairly shitting my pants to begin the mission in a Hostile Area.

I struggled to get a disguise early on as I tried to separate a pair of patrolling guards on the beach to subdue one and take their clothes. I wasted all my coins on trying to separate the two guards, as every time one guard investigated the distraction his mate also came over with him and they stood too close together to take one down without the other noticing. I then tried to throw the Briefcase as a distraction in the hope that one guard would take it to a weapons-stash point and leave his fellow guard isolated for a takedown, but upon finding the briefcase they BOTH followed the same pathing to deliver it to the weapons crate: WTF?!

Reading through this thread after playing my run, it seems I did what many others did and took out the target using the gas lamp she smokes next to, so my run wasn’t in any way remarkable in the community, but I found this one the tensest ET I have played in ages due to having a No Restarts policy in the initial Hostile Area start point, and then experiencing the unique (?) behaviour of the patrolling guards in this mission where it was literally impossible to separate a patrolling guard pair. Stressful in a good way, but stressful nonetheless. 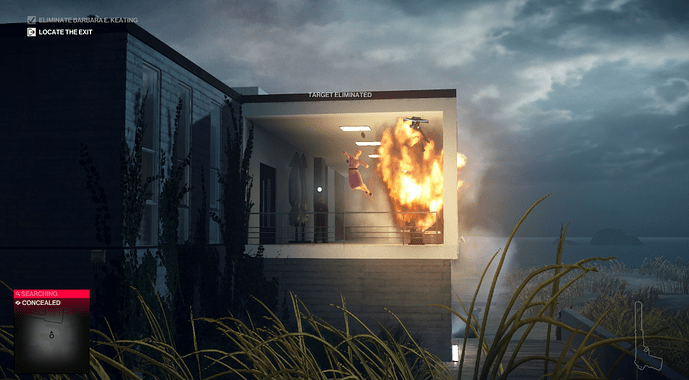 I am very, very, very late to the party, but I eliminated Barbara, which I bet she was blown away about. Heh. This is actually my first successful Elusive Target, so i’m really just happy to get one done.

I also look pretty slick in my new Terminus suit, which is really cool-looking. I feel like the Terminator walking in it.