That’s the hash that you get from using the original QuickBMS script, the latest script extracts files with their RuntimeIDs instead (Which is required if you want to use the patch builder).

Hero. I’ll take a look at that when I get home. Thanks Bierce.

Any other ideas on how to find the correct face texture Notex? I’ve been looking for a couple of days now to no avail.

That’s all you can really do lol.

I went through all the texture files with Noesis and it was a nightmare, but I found the face textures.

But the mesh is the same?

Yeah, I couldn’t be bothered searching through thousands of meshes. I don’t think I could have easily replaced it either.

Brilliant bud. That’s fantastic. Thank you very much. I’m gonna find that myself now and I will see if I can post the texture on a photoshop thread on reddit and will ask if someone can edit the texture in photoshop to get rid of the white patchy parts of his face, basically so the whole of his face area is the same colour as his forehead area if that makes sense.

Superb Notex. Which one do you prefer?

The strange thing is even with the 2016 face applied in H2 he still seems to have that white patchiness around his face area.

Thanks to you guys I now know I’m not crazy . I noticed colour issues with 47’s face since the game came out but people said there was nothing wrong with it and it was just lightining etc. Take a look at this:- 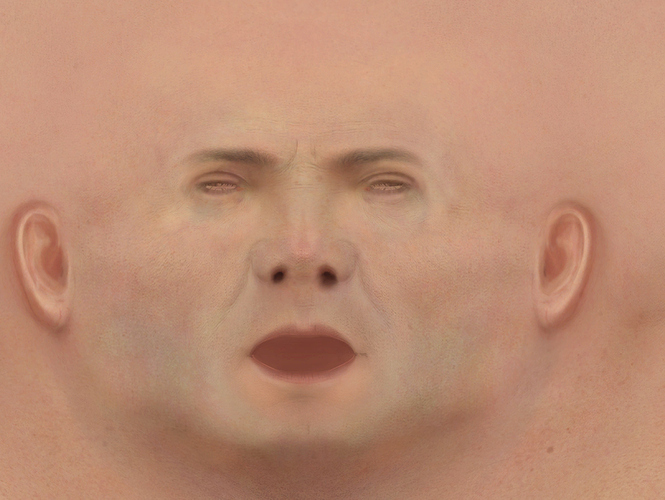 Look at all those white patchy parts around his face area. His whole head and face should be the same colour as the outer areas i.e. more pinkish rather than white OR if they wanted to make his face have white areas then those pink areas should also be white. It looks like he has mild vitiligo at the moment.

Which one do you prefer?

I still like the 2016 face to be honest bud. I like the way they went with a younger prime looking 47 in 2016. Kind of like the way they created a new version of James Bond when they swapped Pierce Brosnan for Daniel Craig.

Kind of like a new version of 47, which I thought made sense with this being a new series of games. H2 looks a bit like the older absolution 47 who was getting a bit past his prime, making mistakes and starting to lose his touch. 2016 47 had an untouchable look to him.

Upscaled 2016’s face to 2048x2048. It won’t work using my texture modding tutorial, the file header is wrong and the texture gets corrupted in-game. I had to use my friend’s program which converts textures correctly without having to use any hex editing tools. Unfortunately he hasn’t released his tool publicly yet, but sometime in the future it will released.

Here is the converted texture if you want to use it: https://i.notex.app/Xy15swA.texd

Brilliant. Thanks very much man. I’ll try that now. Just about to post the 2016 texture on reddit photoshop request to see if a photoshop pro can fix the white patches

Rather than use the patch builder (because I’m not sure how as the documentation on the git seems too vague) I ended up using the reimport.bat file that comes with quick bms, then in the first popup that appears I selected the Hitman2_rpkg.bms script, then in the 2nd popup that appears after that I selected chunk0.rpkg from the HITMAN2 steam folder, then in the 3rd popup I selected a custom folder I’d made called chunk0 containing another folder I’d made called TEXD which contained your file that you sent me renamed to 00f21881494e8789.TEXD

I basically followed the steps from 5:48 onwards in this video:-

But it doesn’t seem to have worked because the command line then said something like 0 files imported and when I ran the game it was still the old face.

Will only the patchbuilder work bud? How do you actually run the thing, does it need to be done in the cmd line?

The documentation here - https://github.com/pawREP/ZHM5PatchBuilder says to use the exe but I can’t find an exe file in there.

Download in the link above has the exe file. And I don’t recommend using QuickBMS’ reimport function for Hitman since it has a file size limit of not being able to reimport a file if it’s larger than it’s original size.

I’m too tired right now to explain how to use the patch builder but I would just mess around with it and see if you can figure it all out.

Patch builder is as simple as dragging and dropping a folder containing your modified file onto it’s exe. You’ll need to use the command line for h6xxtea though which is required for modifying Hitman’s packagedefinition.txt file.

Cool thanks man. I’m guessing it just needs to be a folder called TEXD with your file in it then? I’ll try that now.