Clearly you’re the only one who’s opinon should matter, and us “casuals” aren’t serious Hitman fans.

How do you expect me to react when you jump in and take what I say out of context, and act like none of it is relevant?

Anyone whom thinks these new games are real Hitman games can’t be all that serious about challenge. You don’t see tough sneaks in them like in the previous games. These nuances you claim offer more substance and depth are really just hand holding. They tell you where to go to get X disguise, hinting at using X accidental kill, on the very same mission you’ve done over and over, as if it’s a new “story”.

All those are is very insignificant story arcs at best. They do nothing to add any real substance to the story. I mean hell, the cinematic segments in between missions actually add more to the story than the so called “story missions”. The problem is, cutscenes are not gameplay, just filler in this case.

i don’t have 2016 and Hitman 2 because I for one enjoy my Laptop to be in good health.

Yeah, well kinda missed my point bub, as I clearly stated those are the games for casuals.

clearly missed my satirical take on the situation bub.

If your “take” is to completely speak contrary to a point as if that somehow makes it funny, it’s more of a quirk.

These nuances you claim offer more substance and depth are really just hand holding
They tell you where to go to get X disguise, hinting at using X accidental kill, on the very same mission you’ve done over and over, as if it’s a new “story”.

The game invites you to challenge yourself, restrict yourself and come up with new ways for missions and contracts.
If you’re only playing the game through mission stories then it’d obviously be boring. Mission stories are there to introudce you to the level and npcs.

The problem is, cutscenes are not gameplay, just filler in this case.

I’m only giving one variant of the same result. The underlying point is, whether via story missions and prompts or not, you basically have no more than a handful of missions in the whole game, even if you include DLC missions. Whether you follow the story missions, or experiment on your own (which I’ve also done), the result is the same, you have slightly different ways of carrying out the same exact missions over and over.

The fact that they facilitate it with being able to easily run through missions fast only exacerbates the problem and makes it feel all the more repetitious. I mean hell, there’s even a pretty lengthy thread here dedicated to speedsruns that were popularized by these new games.

Hitman isn’t about getting through arduous stealth missions anymore. It’s about whom can do X challenge the fastest. It has nice realistic and immersive graphics, but it’s wasted on what is now a very arcade game

yea yea yea arguments and such, why is no one else noticing that @Swangtheugly is a fellow weeb! 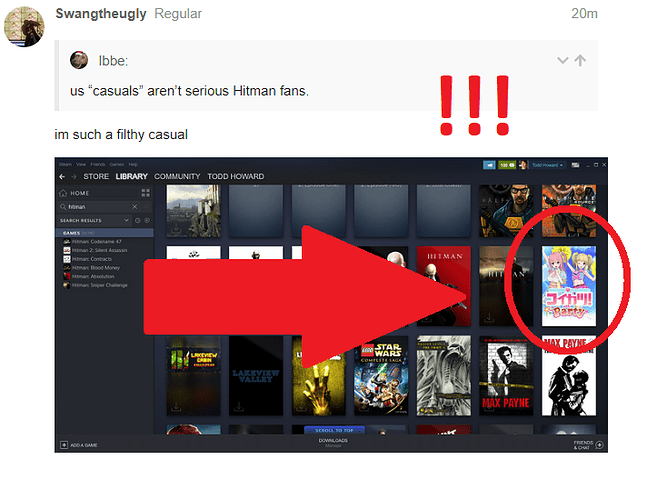 Well I wouldn’t say weeb I’d say I stumbled upon the nsfw stuff on steam and found a game with good reviews and “quality content “.

Its ok, this is a safe place! Im an absolute degenerate weeb so I have 0 problems with some quality content XD

Hey, me and a couple bros had a blast making fun of this game. The reviews are quality.

I get that you’re enthralled with the idea of accessing the same missions via different NPCs to acquire a different disguise, or simply pick up a different weapon or use a different enviro accidental kill, as if that somehow makes it an all new mission, but some of us see it only makes the game more monotonous.

I see what you mean. In an ideal scenario we would have it all. Complex simulations, 20+ Missions. Epic story… basically “Content by every definition”. But that’s not realistic anymore.

You either have games that lean on their CPU intensive simulations like HITMAN 2 or you have “series of tunnels” games that work more on direct gratification and scripted setpieces even if in reality you don’t have that many gameplay options.

I enjoy both types.

But that’s not realistic anymore.

I’m not so sure it isn’t realistic. It seems it’s more likely pressure from the publishers to crank out games fast and cheap. They tend to think more about the shareholders than the customers.

Even if you compare like styles, for instance the new Sniper Ghost Warrior Contracts, there is more content offered in challenges, and many of them require a careful, measured pace, often going prone.

If a less well known team can pull off something like that, the only reason IO can’t is they are partnered with bad publishers.

I’m not so sure it isn’t realistic. It seems it’s more likely pressure from the publishers to crank out games fast and cheap.

I think you need to watch the NoClip Documentary series covering HITMAN and HITMAN 2.

Because that’s not what happened.

Absolutions hat tipping and “crowd hiding” was so half baked. Try beating “Run for your life” on any of the harder difficulties. I literally had to spin in place while disguised in the crowd and dressed as a cop to avoid capture. Seriously? Being dressed as a cop should have been enough to hide but all those 3 things combined still was almost impossible to Silent Assassin.

You also have to wait for the train to pick 47 up which also leaves plenty of room to be cheaply discovered by a cop standing a quarter mile away with countless NPCs between us.

^ I struggled with the end of that mission at first until I realized it’s more about timing than where you hide. If you time it so you get to the platform just before the train arrives it’s a lot easier. They also give you ways to route away from the cops, the side window and ledge work well.

Sure it is a game that makes you work harder to beat it than these new ones, but after I got better at playing it, that’s also what I came to appreciate about it.

I’m digging that LEGO game collection you got there.