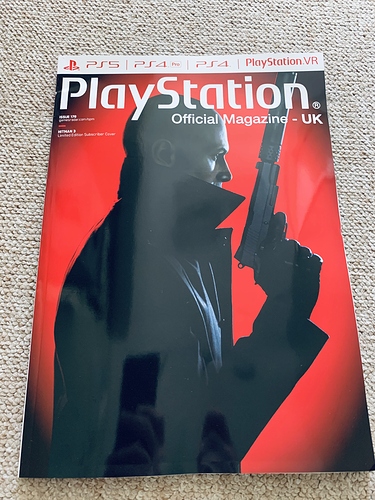 Pleasantly greeted by this when I got home today! 6 page spread on Hitman 3, worth picking up!

Think the cover is a limited edition to subscribers of the magazine. 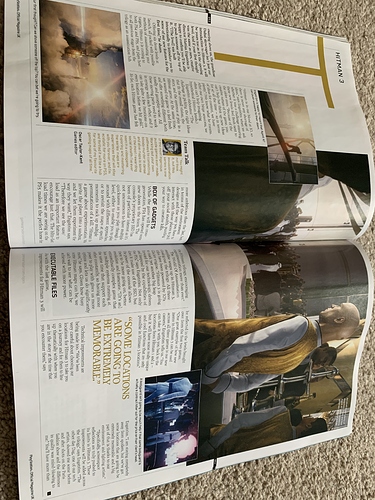 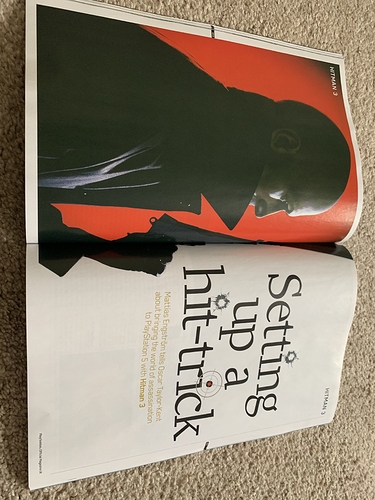 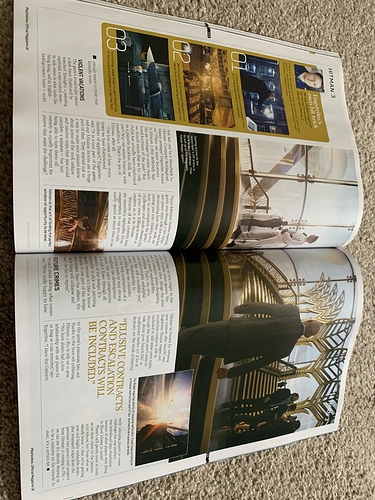 I’m gonna transcribe it so it’s easier to read

oh that is quite nicARE THERE NEW THINGS IN THERE??!

Yes more new news please… The last monthly was one hour of nothing new. Pics from the inside please…

Be a nice lad and share the pages with us pls. 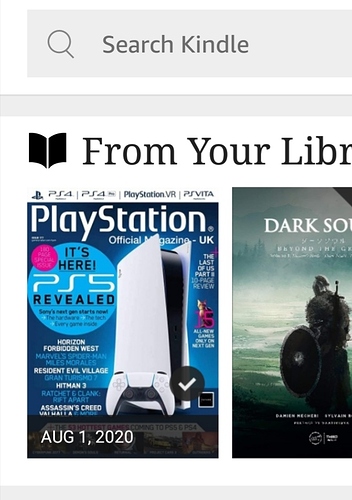 I downloaded it on Kindle with hopes to read the article

but only physical copy is out yet

Be Jam, post the cover, enjoy rest of the evening with relaxing offline activities.

Take pics of the pages pls

You know I’m here to join the begging bandwagon 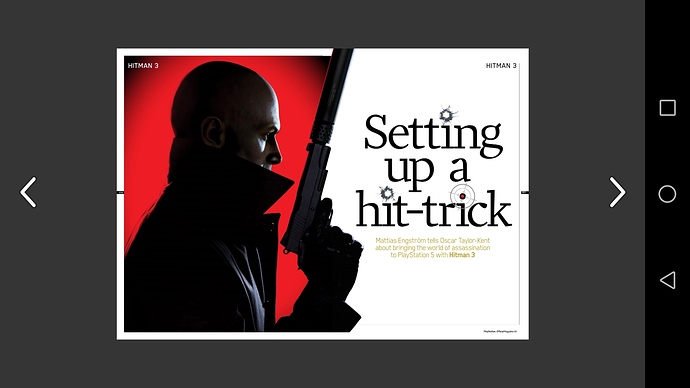 Found a sample with the cover page of the article but it’s not enough! Please Jam

Sorry everyone! I should of known better than not to post the pages

A few interesting tidbits (that aren’t directly related to the PS5 specs):

Seemed like what many people were thinking of regarding Beldingford Manor from H:Contracts.

I’m gonna transcribe it so it’s easier to read

Towering above us, the grandiose Dubai skyscraper isn’t just our introduction to Hitman 3, it will be yours too as it’s the opening level. And if your first thought was the same as ours, creative director Mattias Engström is happy to confirm you’ll be able to push someone off the top of it “[The level] was built intentionally to introduce you to some of our new features for the first time”, he shares.

Offering six dense levels at launch, all packed with possible methods of assassinating your targets, Hitman 3 is coming to both PS4 and PS5, and plays host to all previous stages from the trilogy as an assassination hub.

“Hitman is in our blood at IO, so there is never any shortage of ideas” says Engström when we ask whether it was a challenge ensuring these new levels feel fresh next to the older ones. “Because of the creative nature of the game you can’t help but think up new ideas for 47 all the time - so in terms of ideas for content we have plenty.” (We know what he means. After our own binge sessionsx we often can’t help imagining hypothetical Hitman levels.)

Engström elaborates: “The challenge is picking the right ideas that fit the overall vision, the story, and the systems at play in a Hitman game. At the same time, we wanted the game to feel fresh and offer something different both finally and gameplay-wise. All these moving parts need to work in synergy with each other, and it can take quite a few iterations on every location before we got gold.” So far, each Hitman game has felt more ambitious that the last, both in terms of environment designs and the way you have to interact with those places to pull off your social stealth, puzzling you way to creative kills.

While the game will be cross-generational, PS5 has opened some new doors to the team the console’s proprietary SSD has been of particular interest as it’s not uncommon to have multiple quicksaves as you play through a level, either to enable you to play around with different approaches, or to revisit the maps at specific moments to rack up multiple permutations of a kill. “Hitman is a game about experimentation. We invite the player into a sandbox, and we let them experiment the way they want,” Engström says. “Therefore we see the save/load as an important feature to encourage just that. The blitz-fast load times we are seeing on the PS5 makes it the perfect home for the Hitman trilogy, encouraging experimentation more than ever.”

The World Of Assassination storyline wraps up in Hitman 3, closing out the trilogy. All three titles have been powered by IO’s Glacier engine. “Hitman 3 is going to mark yet another big leap forward for our technology, driven and inspired by the capabilities of the PS5,” says Engström. Not only does it make use of the SSD, but the power of the console allows there to be more going on, better resolution and framerate. “[It’s an] extraordinarily complex game that has multiple systems running at the same time that support each other, so having more power to play with gives us more options and lets us do significantly more,” he says. Given how busy some Hitman maps can be, we can’t wait to see what can be achieved with more power.

As with the last game, improvements for Hitman 3 will be reflected in the levels brought over from the first two games. “One great example of how new items in Hitman 3 can be used across all three games is our new camera,” Engström tells us. “You can take it with you back to the locations from Hitman 1 and 2 - but it will have some really unique and cool functions that are only possible in Hitman 3 locations.”

Technical improvements are being made too. “We’ve been very careful about choosing our locations for Hitman 3 to take you on a journey and for them to line up thematically with where you are in the story at the time that you encounter them,” says Engström. “I am staying completely away from spoilers, but we’ve got some locations that are going to be extremely memorable and a big part of that is thanks to our environment and lighting artists.”
“Specifically, screenspace reflections are truly pushed to its limits in Hitman 3. These improvements will be added across the tirlogy,” says Engström. “The other day Dag, one of our tech artists, showed me some before and after shots on the Paris fashion show and the differrence in quality was mind-blowing to me.” You’ll have more than enough reason to replay your favourite levels.

The game’s reveal trailer shows a dark forest illuminated by searchers’ flashlights, a pulsating nightclub, a rain-soaked, neon-lit side-street in what looks like Hong Kong, and an english-looking country house - could that last one be a throwback to Hitman: Contracts’ Beldingford Manor perhaps ? Engström teases us: “There are some locations in Hitman 3 that definitely feel like an ‘homage’ to some much-loved locations of the past.” But we should stress that so far only Dubai has actually been confirmed as a playable location. Still, we can’t help our minds buzzing with possibilities. Thats’s the joy of Hitman, after all.

“I’ve lost count of how many times we have championed ‘freedom of approach’,” Engström says. “It is a core part of the game and our Mission Stories are a huge part of that. They started out as a way to make sure players knew about some of the cool, unique and creative ways that you could complete a mission - but just being able to turn them off entirely is equally important for players that want the challenge.” These Mission stories essentially guide you through a few unique set-piece-style kills for each level, showcasing how they work, and easing you into thinking about how to accomplish the game’s challenges and make dramatic kills of your own. Killing is never as creative as it is in Hitman.

Because of that creativity, levels are massively replayable. It’s no exaggeration to say you could easily spend as much time on one Hitman map as your might in the whole of some other games. We ask Engström what things the devs have to consider when designing for that much replayability. “Everything. That’s the very short and probably unhelpful answer, but still a truthful one,” he says. “Replayability is something that we consider from the very conception of a level and needs to stay strong thoughout the development process. We can’t compromise on it and it flows through all elements of the design. it’s impossible to pick out anything specific because it’s like a house of cards. If one part of the design feels weaker than the others, the whole thing will collapse and won’t be fun to replay.”

We can’t resist asking what comes next. “We’re really happy to have Hitman be known for releasing new content after launch,” says Engström. Elusive targets and escalation contracts will be included to add some extra replay, though the team aren’t ready to talk about post-launch DLC or multiplayer modes yet. A lot of features are the result of listening to the game’s passionate fans, and thanks to the team self-publishing Hitman 3 this is only set to grow. “We have alwasy had a close relationship with our players for as long as I can remember,” says Engström. “I know that contracts mode [allowing players to create challenges for one another] was introduced into Absolution because of what players were doing in Blood Money in 2006.”
There’s still plenty more to learn as we draw closer to the January 2021 release, but from what we already know - that we’re getting new and highly replayable maps, plus revamped maps from the previous two games (and progress from Hitman 2) coming to PS5 - we can see it’s already shaping up to be a mainstay on the console. In short, it’s a certain hit.

This is the sample TheContractor was talking about: https://issuu.com/futurepublishing/docs/plt178.issuu
It actually shows a slightly different cover. Interesting.

Not necessarily RIP, but maybe updated and changed possibly? Just says they’re not ready to release any info on it as of yet, I honestly can’t see there not being a multiplayer mode of some sort.