Not my find, but I thought this deserved it’s own thread:

HITMAN 3 will be developed and published by IO Interactive. It feels like a natural step for HITMAN 3, as the final game in this trilogy, to come directly from us to our players. We feel ready for the challenge and look forward to embracing the journey, together with our players and community.

There’s something special about HITMAN 3 being the first full game that we self-publish. Everyone at IOI, in both our Copenhagen and Malmö offices, is ready to deliver a Hitman game that we are all extremely proud of.

One final thing; now that we’re the developer and publisher, we’re debating whether to include the IOI logo twice on the HITMAN 3 boot screen. We’ll keep you all informed on what we decide!

So WB is out. What do we think this means if anything? Does it imply that IOI are well off enough that they dare make this step (and thus a bright future for Hitman’s to come), or does it imply WB no longer trusts in the product?
Will there be physical copies?

Hopefully it means no more stupid, anti-consumer PAY MORE MONEY TO NOT GET THE GAME LATE bullshit!

I will not miss Warner Brothers at all. Long Live IO Interactive.

WB out of the picture gives relief. I suspect a good part of why H2 was quite rushed was because of their deadlines. Hopefully with them not putting on more pressure this release will be a smooth one to finish the trilogy with a bang as it deserves.

i hope for the best but i tbh i expect the worst. IO did a terrible job with the marketing for HITMAN 2016 remember the “info” graphic? .

Square Enix handled a lot of the marketing for 2016.

IOI were not self-publishing HITMAN 2016.

IO did a terrible job with the marketing for HITMAN 2016

That’s when they were still with Square Enix. Hitman 2 had no such trouble and neither will Hitman 3 since that isn’t episodic.

yeah i know that Squeenix published the first one, but it was IO who released this weird info graphic which turned out to be absolutely worthless, iirc. 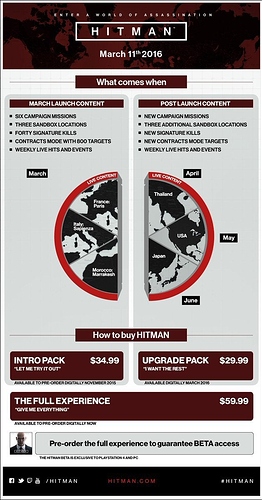 Will there be physical copies?

This is the main question for me, they need at least a distributor for that. I think they’re gonna make like CD Projekt for example. The Witcher is self published but disbributed by Warner and Bandai Namco.

And what about advertising and service client support ? It’s a very big change for them.

I’m so proud of IOI!

Not gonna lie, I’d be pretty gutted if they didn’t release a physical edition. Always looked forward to getting the Collectors Edition’s

Even Squenix was better than WB.
Thrilled to hear they are going independent.

Hoping this also means streamlining (eliminating) the ET system and other stuff.

Well, for one, it means we’re not getting that little batarang throwable we saw in that one trailer, I assume.

um we did get that. it’s from the H2 halloween escalation

Ugh. Shows how long I’ve been away.

My best wishes. They’ve been through a lot, so they can absolutely handle this.

I don’t know much about game publishing, but I can’t imagine them having a big marketing budget without a big name publisher behind them; to me this can only be a bad thing, even if the product itself is great

Am I wrong to think this way? Do companies (that aren’t Valve) succeed at reaching an even bigger market by publishing their own games?
Because they really need to succeed at reaching an even bigger player base than already (as opposed to Call of Duty’s etc, which have such a big market to begin with that they don’t need to increase the player base with each new game to get good money)

Right now it seems their tactic is to give heavy discounts on the previous games and pray that new people get so hooked they’ll spend proper money on the final game. Also seems they’re not going with a ‘celebrity’ this time; like them or loathe them but the Sean Bean thing did generate some publicity that wouldn’t have existed for H2

I think it means WB says: “Good bye. And Good luck.”
HITMAN 2 did make a shiny penny for them. It was probably a happy separation.

Also WB is still onboard for that new “space opera” title by IOI.

Playing the entire trilogy from beginning to end, from within HITMAN 3, also means that the progression systems in HITMAN 3 work across all locations. You can unlock an item in Dubai and take it with you to Paris, for example. Now that we’re talking about items and progression, we’re pleased to say that HITMAN 2 players will have the option to carry over their hard-earned unlocks and progression into HITMAN 3. This is something that players have been asking for and we’re delighted to confirm.

HITMAN 3 will act as a platform for the entire trilogy, and we are excited to finally realise a vision that we had five years ago; to create a game world that would continually grow and expand over time. In the coming months, we’ll share precise details about how location and progression carryover will work.

I wonder if this has any impact on IO’s new IP. Wasn’t that announced a few months ago with WB as publisher?