I haven’t been able to find anyone else with the issue so here goes nothing.

I played Hitman 2 and completed both it and #1 again.

Now with Hitman 3 I’ve done the carry over, however only some things carried over.
All my level masteries for the previous titles are there but roughly only 50% of challenges are completed. Some of them I recognise but there also seems to be new ones.

Although frustrating I have to grind some of these annoying challenges for the 3rd time I thought maybe it was done on purpose for “playability”.

I’ve since run into a snag in Colorado where “Versatile Assassin” needs to be completed and its 4/5 complete.
Yet all 5 of them have already been completed (photo attached)
I’ve redone all actions anyway but it won’t pop.

Anyone else get this “Partial” transfer? 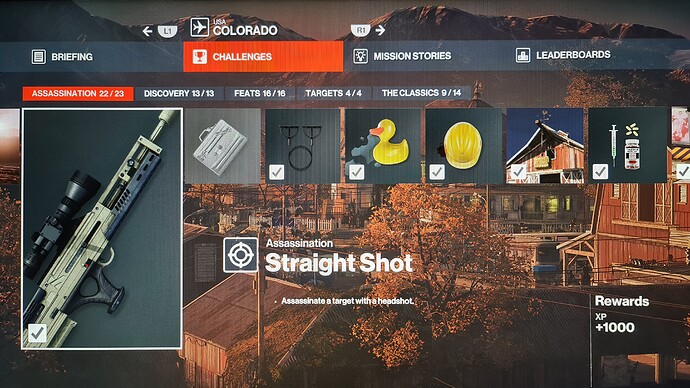 Did you recieve a message of carryover was successfully completed on the carryover website?
Maybe you need to wait till it completes with the message.

If you have this message, I suggest you to try to address to [email protected], also I’ll additionally tag @Dennis_IOI

I had a partial carryover too, I had random challenges that were completed in H2 that didn’t appear as completed after the transfer was complete.

I just put it down to trying to do the transfer back at launch when it kept going down and having issues that caused the issue - but apparently its an ongoing issue if the OP has only recently done the transfer.

Yeah the carry over was successful

It hadn’t been a problem till now. Like I said I thought it was playability.

Personally I had all my items (minus the requiem pack, but that’s a different story) , but not my progress, despite getting a notification it’s been done.
So what it happened, that H’16 sees what I have unlocked, but mission story related challenges got reset.
In H2 all the special assignments got reset, along with PZ’s Vector. The rest are very random, there are challenges I know I completed, yet they’re in a locked state.
Oh, and I still missing my coin from H1, but it never got resolved in H2, so I don’t really care for it anymore.

It is strange. Also, seems to me like it’s buggy given the array of experience we’ve had…

All missions within each stage were reset

It’s pretty random, sometimes you’ll have say, the versatile challenge show as complete, but the piano man, hold my hair, and straight shot ones incomplete, othertimes you end up a bit screwed because it’s the opposite way round, all the constituent challenges of a meta-challenge show as complete but the meta one itself is incomplete and so you end up incapable of unlocking it