Kept you waiting, huh? It’s been a while since we’ve played Monopoly on here. I have the week off from work so anyone up for another game of captalist backstabbing? I’ll be hosting the game, and I’m looking for 4-8 players.

Like last time, we’ll be using the Monopoly: Mega Edition, the rules of which can be found from our last thread here. The only change from last time is that I will be completing omiting Bus Tickets entirely, because they really don’t work well during an online session, and nobody ever really use them. Not sure what to do with the Bus Ticket space on the board, (inbetween the Reds and the Station on the board). May just leave it blank, may make it another Birthday spot (+$100), make it a tax spot (-$100/$200), or may make it a second Auction Space.

Please reply on this thread if you would like to take part. This will last a few weeks, with me updating the game usually every 3 turns.

Sure, I’ll be happy to kick all of your asses again.

Looks like it’s time for the champ to return.

I’ll be honoured to drain your bank accounts. I’m in

What all will I need to fully participate? The actual board game itself and what else?

Too bad there is no actual “Monopoly: HITMAN Edition” to purchase and play (& collect)…

I barely remember how to play this game, but if you play as the Shadow Client, I’ll play as the Constant

Too bad there is no actual “Monopoly: HITMAN Edition” to purchase and play (& collect)…

I think we could make something in the forum for Mega Edition III, maybe the properties are locations in the maps? Locations would be things like the Villa Caruso, Katsuyama Castle, the Petronas Towers, the Villa Borghese, Rangan Tower, Sturrock’s Abattoir, the Palais de Waleska, the asylum in Satu Mare, Hospital Island, the Pushkin Building, the Himmapan, the Thermal Bath Hotel (possible legal issues on that one), the Pine Cone Rehab Clinic, Pappy LeBlanc’s plantation mansion, Blackwater Park, the Terminus Hotel, Ochoa’s Colombian mansion, the water works is now Deruzhka’s ship, free parking is now Free Kirov Parking, the 4 train stations are now the ones that appear in the games (Chicago, St. Petersburg, etc), the electrical company is Kronstadt and the taxes would be those things you could buy in Blood Money to reduce your notoriety.
All prices are the same, of course

What all will I need to fully participate? The actual board game itself and what else?

Don’t need anything. You’re just making a series of choices. You can click the link in the opening post from a past game for more details.

Awesome, thanks for the reply and info.

More from me (in regards to joining up) to follow…

@Gontranno47 Would you like to join us for the game?

@airborne6176 I’m hoping to maybe start the game tomorrow, the more the merrier would be great. Nazareth basically has it right, I’m in charge of the dice RNG, and everytime you have to make a decision, like whether or not to buy a property, I’ll tag you in the thread.

I will give it a go

I’ll be starting this by tomorrow. We have 4 players, 5 if @airborne6176 decides he would like to join us.

I’ll be in the loft re-rigging reserves tomorrow and Thursday, but I be good for the weekend.

The game will probably run for at least 2 or more weeks. Really, as long as you HMF occasionally, and reply to me tagging you, that’s all you have to do. Like me tagging you saying “airborne has landed on Old Kent Road. Do you want to buy it for $60?” That kindof thing.

Is that re-rigging reserve parachutes?

I’m actually setting up the board right now, so I can get started tonight really. It is going to be a slow paced game, although I will move things forward if someone for whatever reason does take a while to get back.

Maybe pop in between break time on your phone? All you’ll be doing is checking to see if it’s time to buy something or not, pay a bill, or negotiate with another player.

Right, I’m ready to go. I’m going to do the first round, then go out and walk my dog before it gets dark. 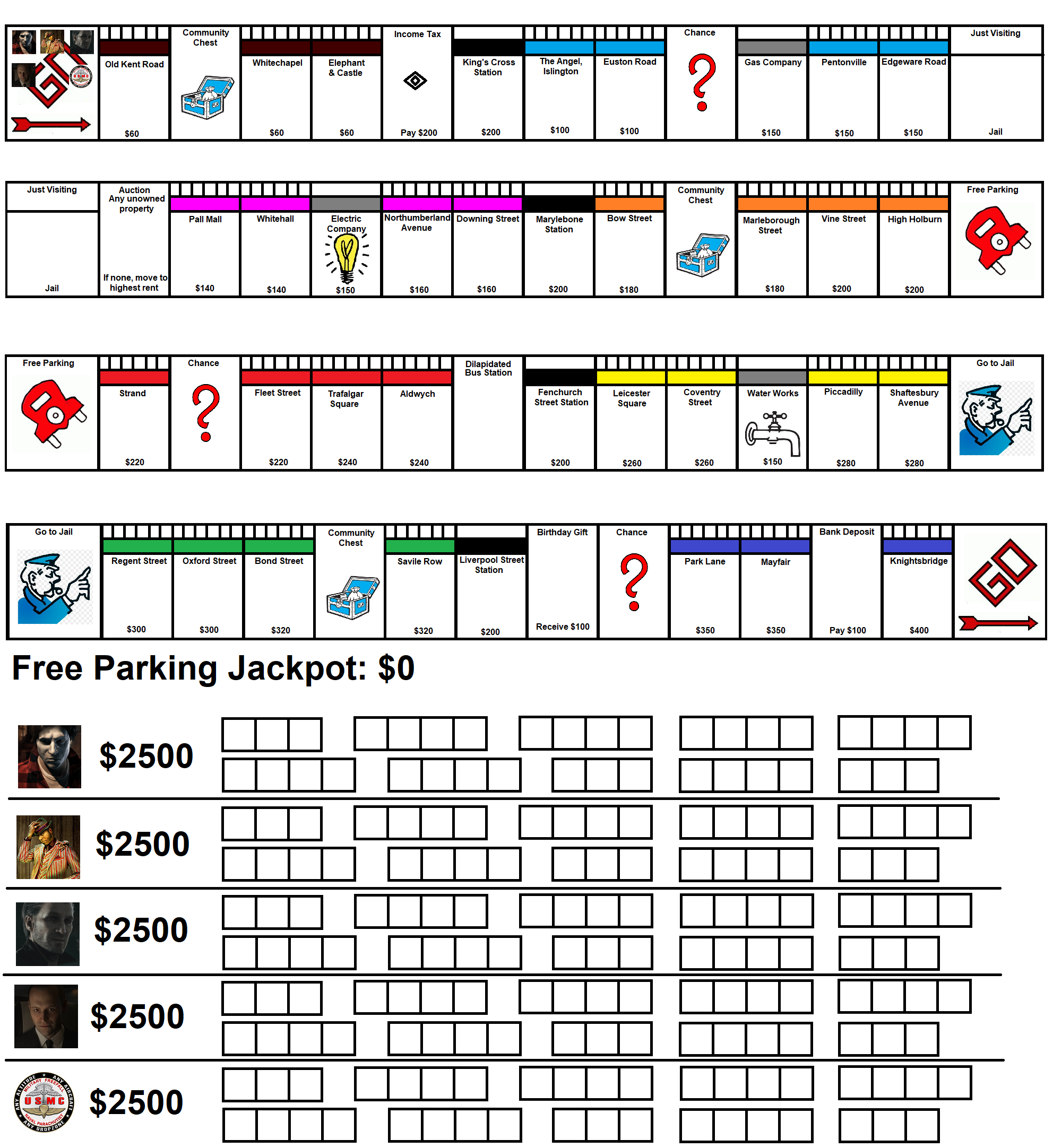 SilentWraith has no buildings, so pays nothing.

Player 5: Airborne6176 rolls a 7 and a Mr Monopoly. Airborne lands on The Angel Islington. Mr Monopoly sends Airborne to the next unowned property, which is Euston Road.

@SeanBernowicz @Gontranno47 @airborne6176 The 3 of you are now in a bidding war for Euston Road. To speed things up bidding will work like this: You must bid over $100. You must private message me your highest bid. Whoever bids the highest of the 3 of you will win the bid, and pay the second highest bidder’s amount + $10. For example:

@Nazareth @SilentWraith You 2 are also in a bidding war for Pentonville. Same auction rules apply.

@SilentWraith you are the only one to land on Pall Mall. You may buy it for $140. If you decline, Pall Mall will go straight to bidding between the other 4 players.

@airborne6176 you are the only one to land on The Angel Islington. Would you like to buy it for $100. If you decline, it will go straight to bidding between the other 4 players.

Good morning Team. Hate to be a harbinger of bad news but I’m gonna have to drop out of the rotation for this iteration of the game. This is due to some buffoonery of other personnel that will be a complete time-sponge and keep us from enjoying this week and upcoming weekend. Roll on w/o me if you can, and please don’t send 47 out after me. THX

“A cleaner has been sent after you”

Do what you’ve got to do