I hope these items come back in Hitman 3. PLEASE! 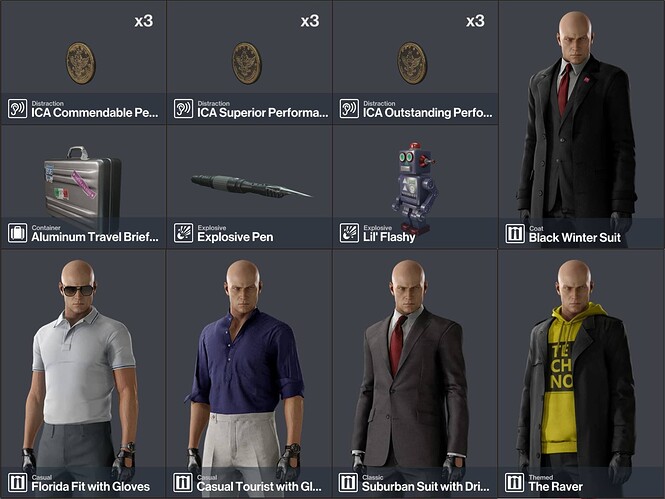 Everyone is looking forward to
Since there is no way to return, it can appear in another form, such as completing 80 special contracts

That all i need
Raver Suit i have it. I pretty sure next month in Egg hunt you will get it.

The Raver - basically confirmed for next month since its an Easter themed escalation and Easter is next month.
Florida Fit with Gloves/Pen/Lil’ Flashy - Semi-confirmed. Travis he has a personal goal to have these appear as unlocks elsewhere in the game.
Casual Tourist/Suburban Suit - Confirmed. All H2 ETs except the Undyings will be run in Year 2.
Coins/Briefcase/Black Winter Suit - Nothing has been said, but probably highly unlikely.

Coins/Briefcase/Black Winter Suit - Nothing has been said, but probably highly unlikely.

The coins (Commendable, Superior, Outstanding) were a loyalty reward for Hitman 2016 players who upgraded to the GOTY edition ($20 at the time).

Commemorative Elusive Target Unlock
If you played any of the Elusive Targets we released during Season One, we have created a small in-game reward that will only be available to a limited number of players. You’ll be awarded one of three coins, depending on your progress with Elusive Targets during their first activation. Progress is measured against simply playing an Elusive Target contract, successfully completing any Elusive Target contract and earning the Silent Assassin rating on an ET contract. The item will be granted when launching the game for the first time with the GOTY Update/Patch.

People who missed out on getting a set (you only got one set, not all three) asked for a re-up when H2 came out and ioi said, nope. If they didn’t do it for H2, I honestly can’t see them doing it for H3.

The Aluminum Briefcase (if you previously played Hitman 2016) and the Black Winter Suit (if you completed an Elusive target in Hitman 2016) were also loyalty rewards for returning players that bought H2.

…and its confirmed that the coins are never coming back.

When it comes to the ICA Performance Coins, they’re not up for grabs. If you didn’t ‘earn’ them when we gave them out, they won’t be coming back elsewhere.

Like I said, it was confirmed before that when Hitman 2 came out.