I want a Freedom fighters remake!

Given they have released this for PC.

I WOULD LOVE TO SEE A REMAKE OR SEQUEL !

Including better shooting mechanics and extra difficulty options. The first game was way too easy.

But was brilliantly innovative in simplifying squad mechanics, but still offering enough control to remain quite tactical.

I loved how you could position your men individually or as a group.

Also how what you did in one mission would affect another! Destroying the helipad meant no enemy chopper in another mission. It was great!

It was a great game. 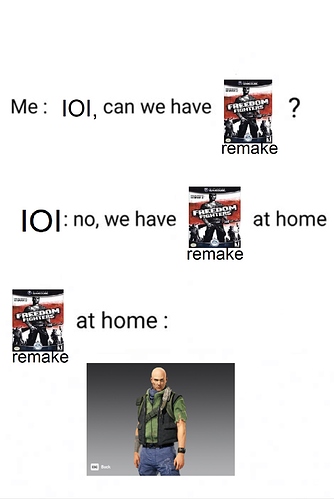 I really just want to complete the story mode and see all the cool cut scenes rather than spending too much time mastering different levels of difficulty, especially because the game is quite old.

Totally worth it though!!!
It’s like H2 or contracts but you get to use all the loud guns and eliminate all enforcers
Very fun game, very happy with the purchase

And I totally agree they should make a sequel.

Were you able to play Freedom Fighters on your PC using a game controller and did it map out properly w/o issues?

For those who don’t remember or know about these classic codes from the original release basically " broke " this game wide open (and actually made it an even better game IMO on the highest difficulty). Look them up when you can, as I remember using these (and the classic GameShark) on my PS2 for some of the best game plays back in the day. Freedom Fighters was/is before it’s time in terms of being a great game. (my rant is done)

I don’t get why some people play games (especially a game like this) for the story??

And this is hardly a game where the focus or standout feature is the story!

Personally I play games because I want to PLAY a game not watch a bloody sub par story in cutscenes.

You must know the difference between just watching the story and becoming a part of the story.

Personally I play games because I want to PLAY a game not watch a bloody sub par story in cutscenes.

You can’t say someone sucks at games because they had difficulty playing a specific game. And he/she didn’t say why it was hard.

I feel strongly about stories in games.

I really feel that games need to move away from traditional linear storytelling, i.e. watching a cut scene. Also I’m not much interested in scripted stories.

I find emergent stories that are born out of artificial intelligence and from emergent dynamic gameplay and player controlled experiences far more exciting.

Now I would say that you had a point with regards to games that offer dialogue options, because then it feels like you’re controlling where the story goes.

But again I feel far more connected to a character that I’ve created, and that I have control over.

For example — in the first Fable game —

I married an NPC, and I tested out the AI behaviours and responses. I beat my wife and after some time she handed back the wedding ring to me and said she didn’t love me anymore. Divorced.
And then lived in our house with another woman and her kid paying me rent.

Whenever I would see her around town, she would say “I hate you, don’t talk to me”

I killed her… One night. The kid ran out screaming into the night and brought back the town guard.

At the time — that crap blew my mind!

It’s a bit dark. But it was an emergent story that came out of the gameplay and artificial simulation of the game world. And it had much more of a powerful impact and resonance. It was my own story. And as such it stayed with me after all these years.

Similar to when I used to play Skyrim. There was an elf NPC, companion that I had follow me for a large portion of the game.

I had kitted him out with the best gear and armour, and he had saved my life on more than one on occasion.

So at the Battle of the windhelm, after the smoke cleared and the battle was over, I could not find him.
I walked back down through the streets, with the bodies of the slain all over the place. Eventually I found his body and it was a moment of genuine emotional poignancy. I felt the loss.

For me this is the special source.

This is where I feel video games have the ability to tell stories of the kind that are not possible in books or movies.

Well, for some people, controlling a character to trigger cutscenes is enough to feel they’re part of the story.

But I agree that video games have a potential that can do storytelling books or movies can’t. Great reply.

It’s really not that serious