I’m back with another “Improving…” installment. A thread wherein I try to list different ways I would improve a mission without significant changes to the map or entire re-toolings of the main mission.

Most recently I’ve tackled “The Finishline” and “Three-Headed Serpent”. This time it’s “Chasing a Ghost” (in Mumbai).

Let’s jump into it. 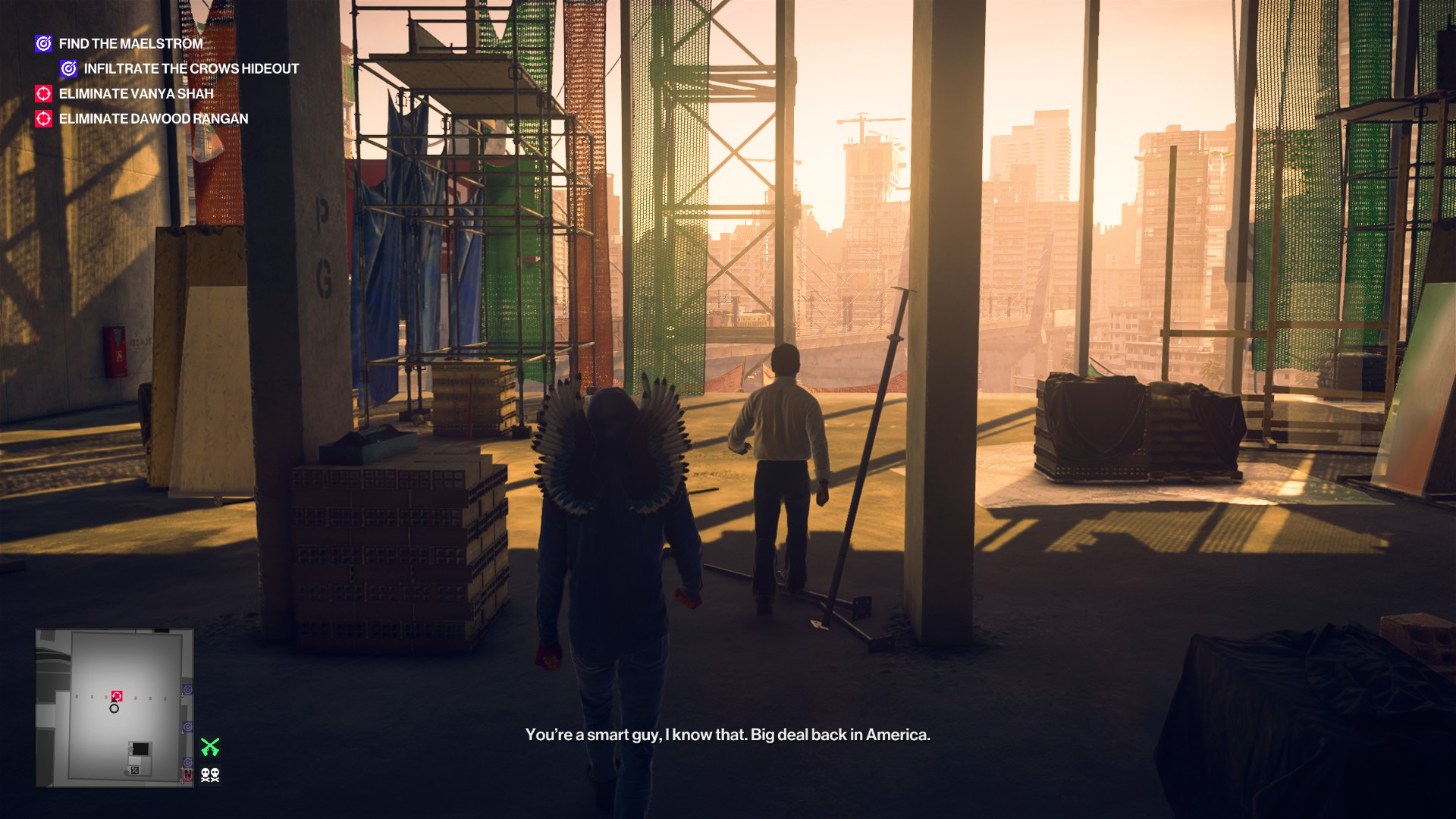 The Gregory Arthur Mission Story leads to a really lovely visual moment when you reach the very top of Rangan Tower, but let’s be clear… if you do this in a way where you don’t pretend to know where you’ll end up, there’s not many ways to end it in a satisfying manner. Rangan brings his personal bodyguard up with him, and two guards by the stairs have their eyes on you as well. As a minimum preparation, you need to get rid of Rangan’s guard beforehand. It’s kind of awkward. This is also an optimal time to kick Rangan down from the highest point of the tower and have him land in cement. That would be a beautiful kill… except there’s no setup for it. 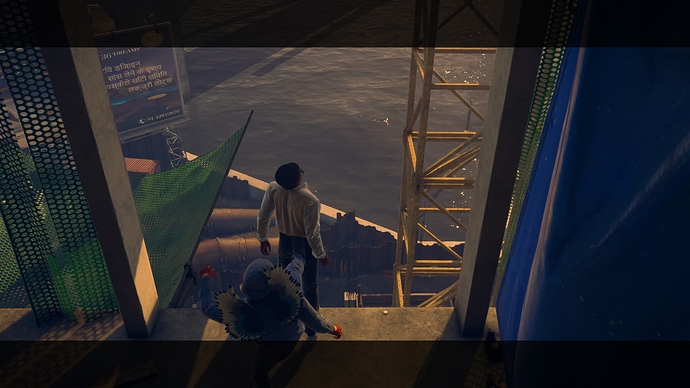 This moment was set up by getting rid of Rangan’s bodyguard beforehand, and setting up a breadcrumb trail of coins. Far from perfect.

There’s probably multiple ways to help this work. The classic of having the target dismissing his guards is a bit too easy, but maybe we can fix two problems at once.

As it is, once you talk to Rangan he will have you follow him up. At this point you cannot know that there will be a frisk point up ahead. It’s awkward that the only real way of getting through this is ditching guns etc beforehand, when story wise you can’t know. I suggest having Rangan go up stairs, and he tells you to join him, but the dialog makes it clear you don’t have to go up right away. This allows you time to smuggle, sneak, and even get rid of Rangan’s bodyguard before heading up. Have the conversation between Rangan and 47-Arthur end with Rangan standing at the edge of the building, ready for a kick.

The Sniper’s Nest (and the mole) 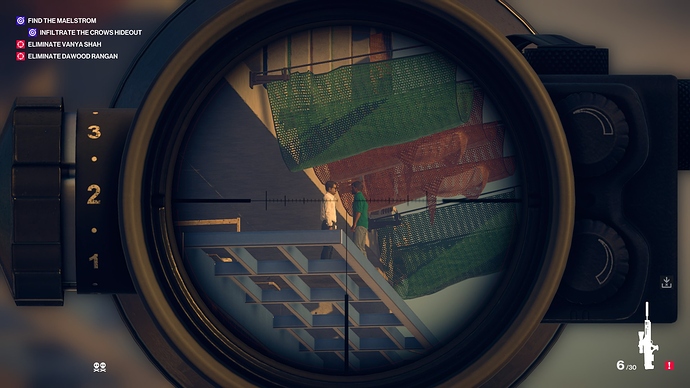 The sniper’s nest in this mission is a great little location, with a nice line of sight on the spot where Rangan interrogates the mole, but because of how it is set up, it’s a witnessed kill if you shoot him from here. First of all, allow Rangan killing the mole to be triggered not just by proximity, but by “visual proximity” meaning, if you look at it through a scope, it’s triggered. Now one witness will soon disappear. Second, make it possible to cause a distraction to make the guards turn away, maybe sniping a glass pane nearby. Now you can snipe Rangan and drop his body into the cement below.

This is one of the least flexible Mission Stories of all in Chasing a Ghost. A really nice solution to get the tailor to meet with Vanya Shah is the ability to escort him as a royal guard. There’s already dialog in there that seems to imply this is possible. 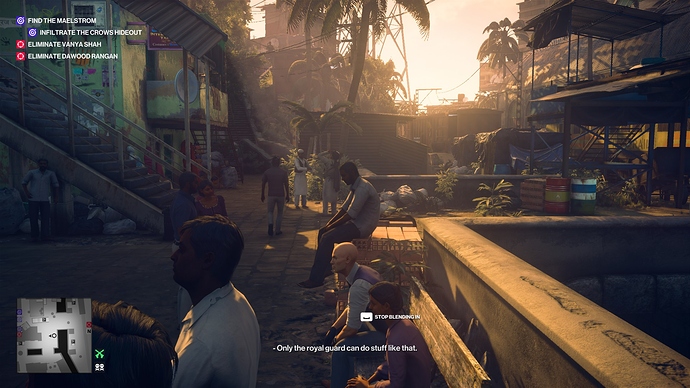 For even more flexibility, I suggest that a royal guard actually is sent out to fetch the tailor a bit later on. He won’t find him, since the tailor goes into hiding, but as a civilian you can report where he is to the guard (multiple choice). If you give him the right location, he will find the tailor and bring him back to Vanya Shah. 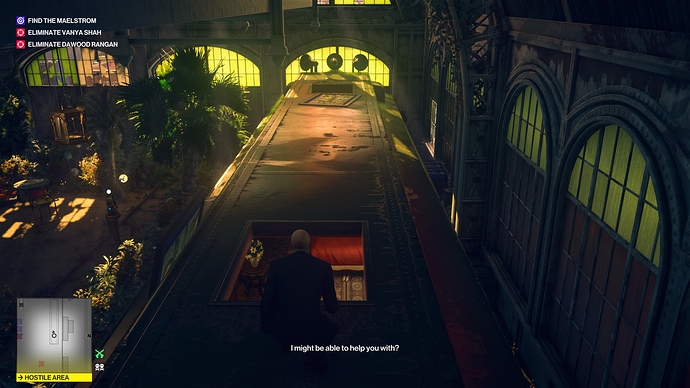 Now, with a bit of work you can observe as Vanya gets measured, and then drop down at an opportune moment.

When I first played this mission, finding the Maelstrom was one of the things I liked the least. Identifying him from the crowd felt tedious, and because this is one of the easiest methods to trigger it is likely one of the first experiences people had with identifying the Maelstrom. Considering all of the other methods are better, this is unfortunate.

One way of solving this might be to push another method to the forefront, but I would prefer to see picking him out of the crowd being improved. Essentially I’d like for the player to actively chose the NPC for Diana to confirm. There can still be a number of point-of-interest NPCs, but the player needs to approach them and activate the identification. I imagine you get 3 or so shots before the NPCs will report you as suspicious to nearby guards. Just make sure the photos that can be found are complete and clear, so the player has a legitimate chance of doing it.

”The Fan” Mission Story is another mission story that is unflexible, and requires you to take very specific roles, creating a stifling feeling of linearity. Get the crew disguise, get the script, give it to the director… 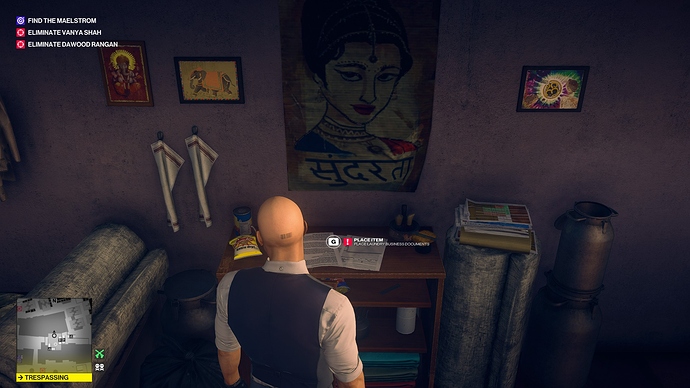 My suggestion is to draw inspiration from the foreman part of the Kashmirian story, and add a spot (like a table) where the script can placed for the director (or someone else) to find. In this case another crewmember will man the fan, and you can either use the opportunity to kill Rangan while he changes into his stage outfit, or make sure to be somewhere else in order to do… 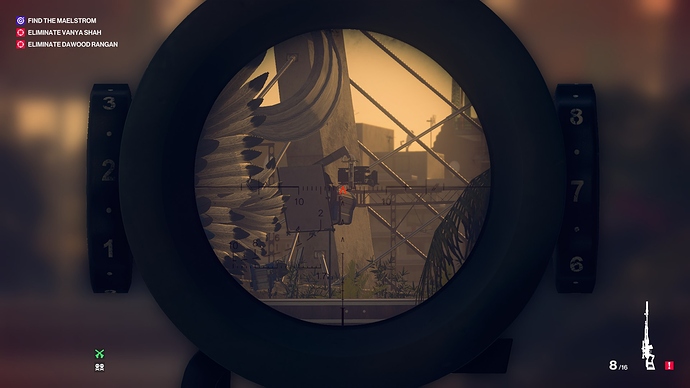 You’ve always been able to kill Rangan using the camera rig, but it requires the same steps as the fan-kill, and as such doesn’t really feel all that great.

Following the points in ”Scipt Issues” you can now place a script, suit only, in order to cause Rangan to come down, and then perform a camera rig kill with a sniper shot from a distance. A greatly improved kill. 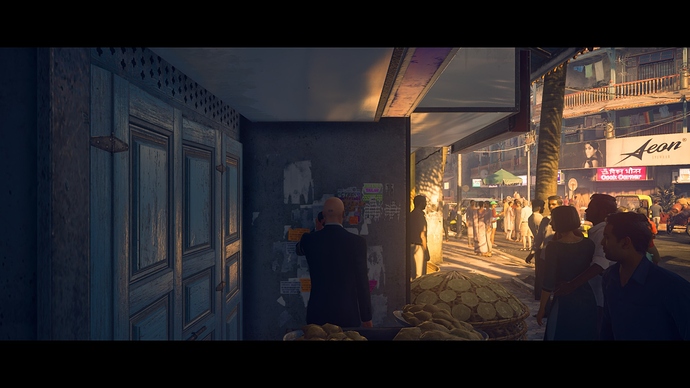 This is a small point, but the phone booths in Miami and the booths in Mumbai work differently in presentation. In Miami you’re free to spin the camera around while 47 uses the phone booth, but in Mumbai you’re not. I prefer the former by far. Freedom is always better. 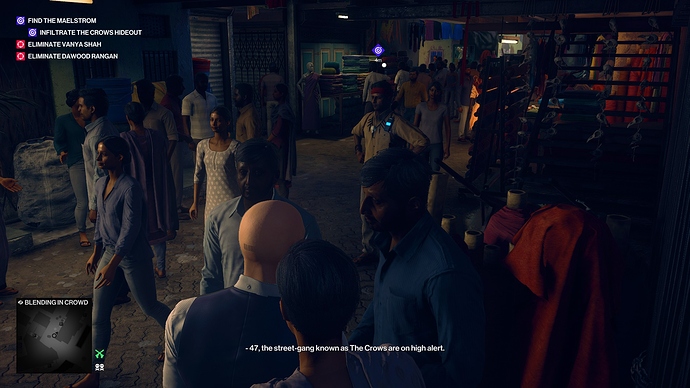 Having Crows walk around Mumbai, and a lot of them being Enforcers is a bit of a problem as is, because having to stop in a crowd and wait for the Crows to turn around or pass by gets a bit tedious, especially is you’re trying to follow someone. This might be solvable by simply adding more crowds, so you can walk by more easily, or adding more blending spots, which generally feel better to pass the time, but I would much prefer a combination of lowering the number of Enforcers and/or their placement was slightly modified with adding more crowds to blend into.

This point uses the same idea as ”Script Issues”, basically adding a place where you can put the Maelstrom’s photo in the store, allowing the Barber to remember what he looks like and open up the shop on his own. This wouldn’t open up a kill, but would allow you to identify the Maelstrom when he arrives to get his hair done.

There… I’m done…
I wanna clarify that I love this level, but it’s not perfect.

Anways… anyone have comments, or ideas of their own?

Doesn’t Rangan follow you to the place where you can kick him down to the cement pit if you just walk there after he starts talking to you? You don’t even have to do anything to his bodyguard. That’s how I have always done that.
Btw Maelstrom’s recordings should be illegal at that frisking point because Rangan specifically says that he doesn’t want any recording devices there lol.

If that’s possible then that’s cool. It is odd though. The way it’s set up it very much seems like you’re supposed to stop and listen to Rangan, not walk wherever.

I always wanted to have Kashmirian kill Maelstorm aswell. For making that happen, you need to find gun he lost (5mm) put it on table next in his room. You would also need to také away assault rifle inside bunker where both meet. It would go like this:
Maelstorm thanks Kashmirian for his job and offers him joining the Crows. He refuses and asks for payment. They start arguing and:
If Wazir has gun, he shoots Kasmirian on side.
If he doesn’t, Kashmirian pulls out his pistol and threatens him. Kale mocks him and gets shot. Kashmirian then realizes what he did and runs to his apartment where he calls for nearest plane leaving Mumbai.

Sounds like something I’d enjoy.
That being said, I think the Kashmirian story is so well constructed with so much flexibility in it that I’d rather they add to something else if I had to choose.

I agree, Kashmirian has good backstory.