Are there any talks about a “Glacier 3”? Travis have mentioned in a few places that some elements like prison or elevator can’t be implemented, maybe we can expect those for the future games with an upgraded brand new Glacier.

And following along from that, can we get an unlockable rake ?

Better still is that you can actually use the rake.

You can rake leaves into a pile, and then you hide little beetles carrying TNT (remote explosive) on their backs amongst the pile of leaves .

Unsuspecting NPC attracted to jump into the pile of leaves and you blow the NPC up.

– maybe too complicated to program though for what it is worth.

Does the rake still break if you drop it? A more portable

would be more practical. Maybe you can get them in a small bunch like the 3x Batarangs and Shurikens.

Can one obtain absolution after one confesses their… Sins?

Can we please get the MINI-GUN unlock from the classic hitman games? 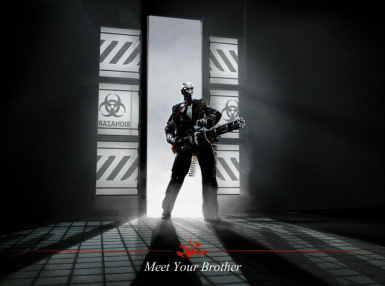 i would love that as an unlockable

Why don’t make the dual silverballers? I’d pay gold for them, I’m not the only one i bet.

Are there any talks about a “Glacier 3”? Travis have mentioned in a few places that some elements like prison or elevator can’t be implemented, maybe we can expect those for the future games with an upgraded brand new Glacier.

Because of global warming the next version of the Glacier engine from IO Interactive will be WaterWorld 3.

Are there any talks about a “Glacier 3”? Travis have mentioned in a few places that some elements like prison or elevator can’t be implemented

Glacier 2 is capable of doing elevators, there’s at least 1 in Absolution, in Death Factory and 1 in Dexter Industry iirc.

I thought maybe its palnned to be Macau.
Macau its like HK traditional chinese and the green neon signs there seems like HK and macau they have same style.
I think like that because they build it (like we see on the trailer), and after this they change it to Chongqing and rebuild location.
And we see 1 building looks like Macau Lisboa Hotel

The storm effect on Haven Island, I wouldn’t ask you to get rid of it completely because I’m sure many or most might like it… I do not. Please make it transient or better yet, able to toggle “off”.

Are there any plans on adding unused weaponry, found within game files, namely dark variants of various weapons (Krugermeiner, Black Lily, Shaska)? They look amazing, and fit H3 theme so well it would be shame to leave them lying unused.

Are they animated cutscenes tho? From what I remember of that game all elevators were used as loading/checkpoints and you can’t move around in a moving elevator

Are there any talks about a “Glacier 3”? Travis have mentioned in a few places that some elements like prison or elevator can’t be implemented,

Wait, really?
I mean Absolution (which uses glacier) had working elevators, which helped load other segments of a level to load.

Question:
Will there be or are there any plans for content after the H3’s release on steam? (besides the reactivation of ETs and contracts)

I’m pretty sure you can move during the DF Elevator, while it moves. There’s a Cutscene mid-ride tho, so I’m not sure if it’s there to hide a teleport or something like that.

Is someone able to confirm this? I’m on my way to work. If not I’ll download Absolution and try it when I get home.

There is the testing facility in Dexter Industries, where they’re blowing up the pigs. 47 can move around while that’s going down. I don’t recall if you could get back on it and go up and down (again). I think it closes off - so maybe that prevents you from getting back on it.

The issue with elevators is not making them in the engine, it’s making the NPCs use them/integrate them in their routine.
Same type of reason for a prison level.

For the prison level, NPC don’t have a faction system nor a way to check restricted areas for other NPCs (that’s why you can coin them everywhere and why they are not limited/blocked when they panic and need to flee). When the team implemented one allied NPC (Diana) it was apparently a behemoth of a task (and a bit jury rigged).
It could potentially be made, but that’s more of a sequel/long term prototype and implementation improvement than a post launch one. (it also looks like the kind of system with a lot of potential for conflicts)

As for the elevator I don’t remember exactly where they talked about them, but from the way they talked I would be surprised if they didn’t at least prototype them.
I think the issue was on pathing.
Maybe it just broke, maybe it can works fine when close by but breaks once the NPC are out of sight/far away and goes into their simplified ai mode.
Maybe it demands too much ressource for too little (this remarks is for both development ressource and the engine ressource).

I’m preparing a post for hitman general with transcripts of the IOI live, monthly and extras akin to what I did for the IOI extra in september. It could be useful to have all those informations in one place.
I’m a bit better, but still in isolation so I will try to double my efforts on it, but don’t expect it before two/three weeks.

Now I know it might be too late, but for a question : can we have a bunch of useless but fun statistics about the game ?

The geometry gaps, where NPC’s can see through walls because of tiny gaps in the level.

Last time I tried (i.e. yesterday), it actually does auto-lock. Doesn´t degrade its usefulness though