A thread for discussing any news & speculation about IOI’s ‘Unannounced Project’.

As yet, little is known about this upcoming game aside from the strong likelihood that it will be a multiplayer focused experience. Rumours have previously circulated online that it could be an Xbox exclusive. It has also been suggested there might be a fantasy theme, but these rumours are as yet unconfirmed. I’m going to kick this off with some speculation based on the job listings from IOI’s careers page.

IO Interactive is embarking on a new journey - into the world of emergent multi-player on a unique unannounced project that we believe will shape the future for years to come of both our studio and the relationships we’ve built with our players.

In the context of online multiplayer, experiences which jump to my mind are games such as Minecraft or Rust which enable players to forge their own complex narratives in a sandbox environment, without the need for much scripted gameplay.

I would be interested to hear other people’s thoughts on the meaning of “emergent multi-player”.

When it comes to developing this new console project, we are seeking a Technical Director who is passionate and experienced with multiplayer tech.

A new “console project”? So does this mean the ‘Unnanounced Project’ will not be coming to PC as that phrase seems to suggest? Or does it mean it’s being developed for console, to be later ported to PC?

We can offer the immersive mastery we are known for, on a whole other level of player interaction.

This implies Hitman is known for “immersive mastery”. I guess this refers to the gameplay experience of mastering a sandbox environment to the point that you can become immersed as an expert assassin (although I would love to hear alternative interpretations of this).

So, if they are already known for this “immersive mastery”, then what does it mean to offer this on a whole other level of player interaction? Is this just marketing spiel? Or is there some deeper meaning?

When it comes to developing this new console project, we are seeking a gameplay director who can deliver multiplayer across multiple platforms, with a clear focus on delivering an outstanding game experience.

The phrase “deliver multiplayer across multiple platforms” seems to contradict the rumours that this is an Xbox exclusive game. Also, this implies crossplay (swiftly becoming the norm for online gaming).

We’re cooking a brand-new title and concept that will continue the immersive mastery we got you used to, except on a whole other level of player interaction. For that, we need to consolidate our engine’s networking capabilities. You’ll be in for the long-haul. Sounds like fun? Oh, we know it will be.

“Cooking a brand-new title and concept” emphasises the idea that this game will be unique. This could just be to create hype, but it does sound like they are trying to make something original.

You probably guessed it: as a Senior Gameplay Programmer you will own and develop large features of the game. Whether it is strategic AI, camera control, and progression systems, this game will feel like you.

The mention of “strategic AI” jumps out. It suggests that this game will not be a straight PvP multiplayer experience, which is what I would have suspected anyway. Does ‘strategic’ imply anything else? 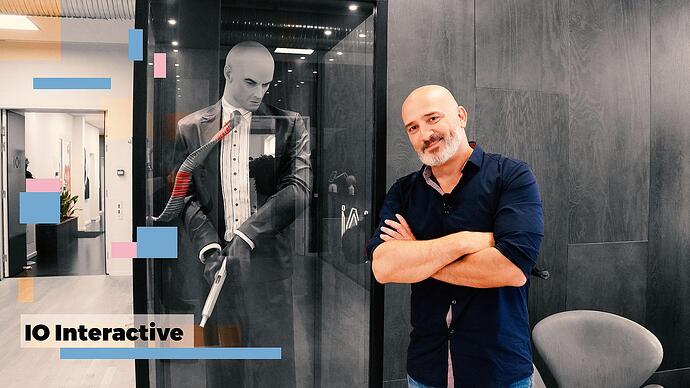 Danish interview with Hakan, mostly about the transformation from near bankrupcy to the current succes, but he also talks about the “secret projekt” that they can’t wait to share information about.

He says it is something that the veterans at IO consider “heart blood” and that they have dreamed of developing this for years. With this in mind it cannot be something that is far from the games we know. My guess is that it is some sort of muliplayer angle on the Hitman universe.

Nice map of the WoA. 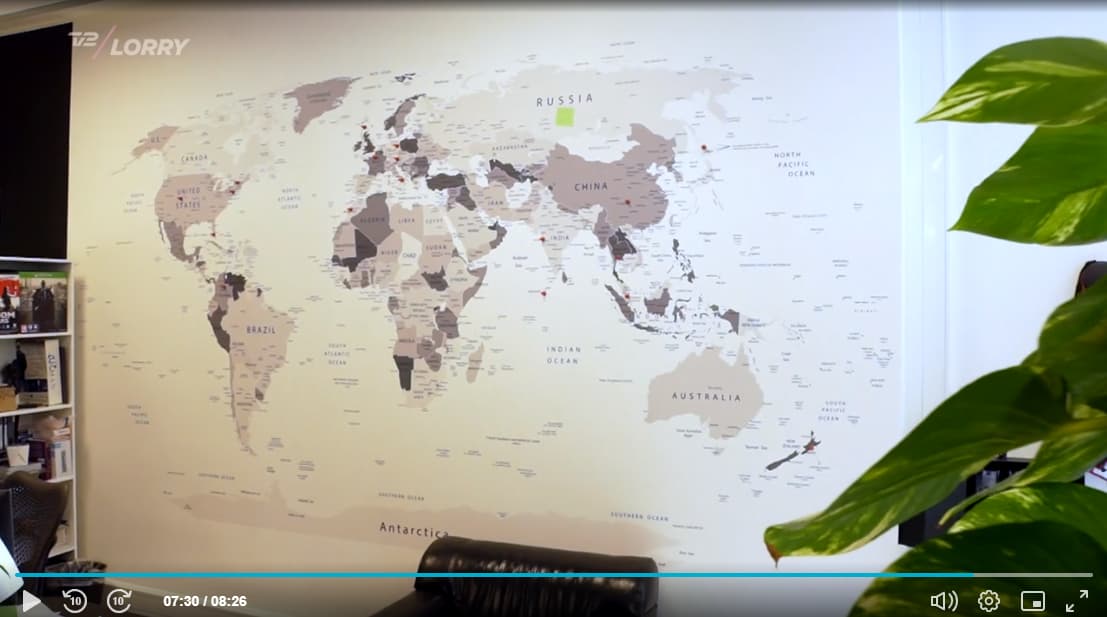 I’ve noticed a new role, ‘Business Performance Manager’ being advertised on IOI’s website, which seems to contain some interesting clues about plans for the Unannounced Project.

Why do people spend time in games, and how can we work strategically with our passionate players?
If you can answer that and immediately start to think about engaging players, growing the business, and finding new and exciting initiatives to engage players, then you may be our new Business Performance Manager.

The phrase “work strategically with our passionate players” is interesting language. Not least because this Unannounced Project doesn’t currently have any players, let alone passionate ones! And, of course, players are supposed to be customers enjoying the game, not working on it.

What you will do:

“Acquisition, retention, and monetization.” Attract players, keep them playing, and keep them spending.

“Interesting features to improve… monetization”. In other words, features designed to keep people playing & spending. Concepts such as ‘battle passes’ in Fortnite & Call of Duty spring to mind.

Is use of the word “ethical” a good sign? Does this suggest an intention to avoid the worst excesses of addictive, exploitative microtransactions? One could only hope…

Here is a suggestion that IOI might seek to repeat the possible business successes of this Unannounced Project in “other games”. I wonder how relevant this might prove to be for future Hitman titles.

It probably goes without saying, but ‘MTX’ is industry code for microtransactions.

None of this is particularly surprising given the rapid growth of these business practices throughout the industry, especially in the multiplayer genre. But it’s interesting to see such language in black and white on IOI’s website. If you saw this text in isolation, you would be forgiven for assuming it was a job advert that had been posted by EA, Ubisoft or Activision Blizzard.

Interesting read! As you say not surprising that they would look into this. Here’s hoping they keep it “ethical”.

Did they maybe mean to write “discrete”, as in separate or distinct?

I think it genuinely means “discreet”, as in “not the vocal part of the community”, as in “reddit, twitter, and the offical forums are fine, we genuinely love them but not everyone is on it and more importantly their needs, wants, and demands are not universal or even the baseline”.

So “identify discreet player segments” means “what does the player base consist of and wants”, the “casual one”, the “I will try it quickly on a subscription basis”, the “it’s not my genre but I heard it’s good”, the “I play once every month and need some time to relearn some of the more contextual controls and finer part of the gameplay”.
It’s not for nothing they use the term “player”, not the oh-so-used-as-an-term-of-endearment-in-some-places “gamer”.

For an Hitman example : shoulder swap,

More generaly, in multiplayer it will be “how do I distinguish between the segment of the player base that wants to have a highly competitive, maybe e-sport like game, that is always above the retention thresold and ready to sink hours just in crafting menu and the segment that when fed up just leaves the game and moves on, not goes and posts online”

On the “ethical” one, as much as it could mean “we have our own guidelines and set of correct behaviors here at IO”, it certainly just means “according to industry standart, don’t try to have some strange initiative that are always only born in managements offices and are hem disliked by the developers, when it’s not directly an hindrance to them and their work. You won’t be the master of the whole process.”

Bloody hell. I fully hit the nail on the head when I suggested this could have been written by “EA, Ubisoft or Activision Blizzard”. Turns out the “What you will do” section has been entirely plagiarised from a Blizzard job advert posted in 2020 for a ‘Business Performance Lead’ on Diablo IV. 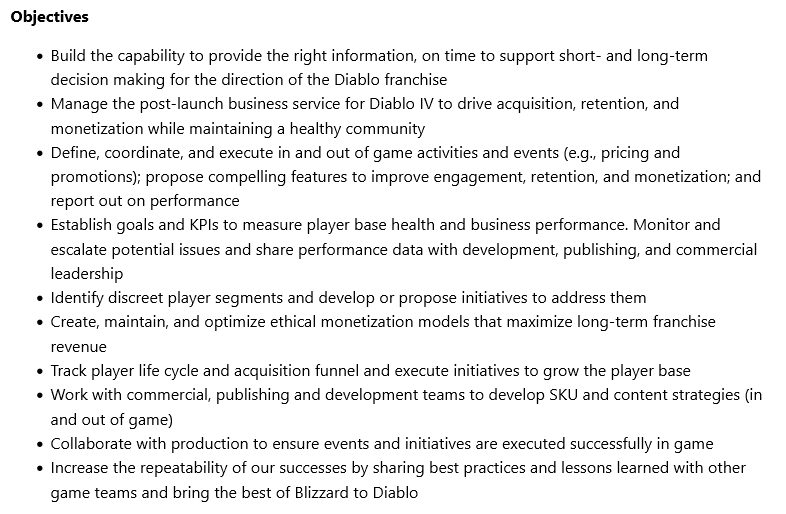 So “identify discreet player segments” means “what does the player base consist of and wants”, the “casual one”, the “I will try it quickly on a subscription basis”

Essentially you’re making the same point as me, just with extra steps. It’s ultimately about turning these more reluctant, prudent players into people who will spend money in-game.

Remember, this is an advert for a Business Performance Manager. Everything here is about increasing revenue. “Identify discreet player segments” = work out which types of players don’t spend money; “develop or propose initiatives to address them” = find ways to get them to part with their cash.

On the “ethical” one… it certainly just means “according to industry standart,

It appears in this context: “optimize ethical monetization models that maximize long-term franchise revenue”. So, really, the focus of that sentence is about making as much money as possible. It feels as though “ethical” has been sprinkled in to downplay what otherwise sounds like quite predatory overtones.