i think mockups are more interesting than just text

most of the values are fictitious, so don´t take it too seriously. i just want to share some ideas. enjoy 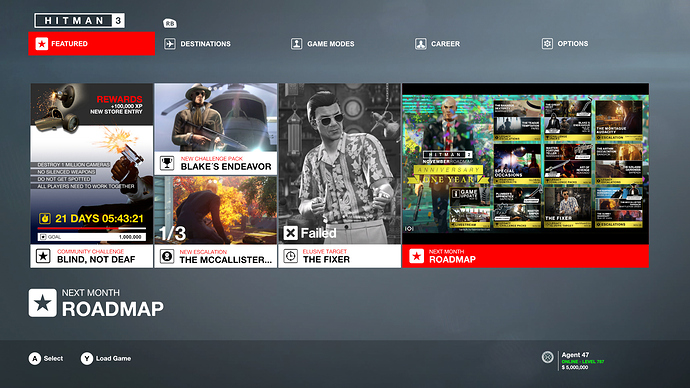 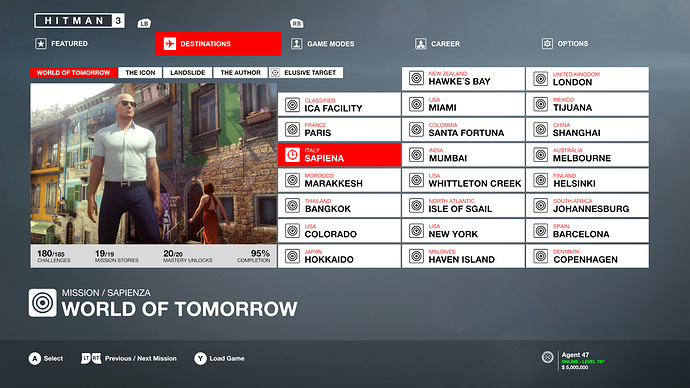 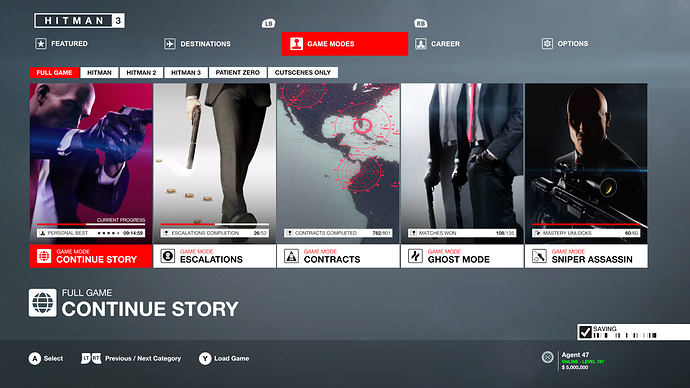 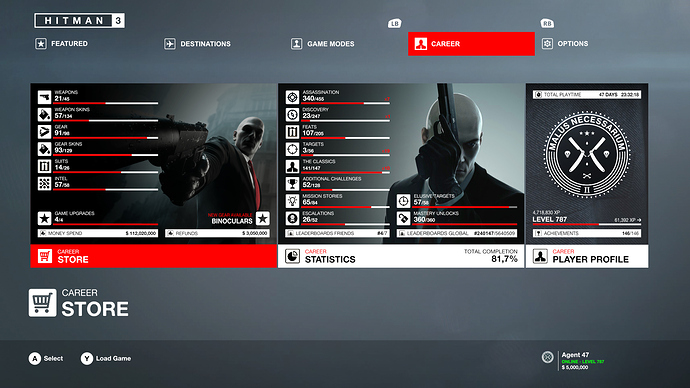 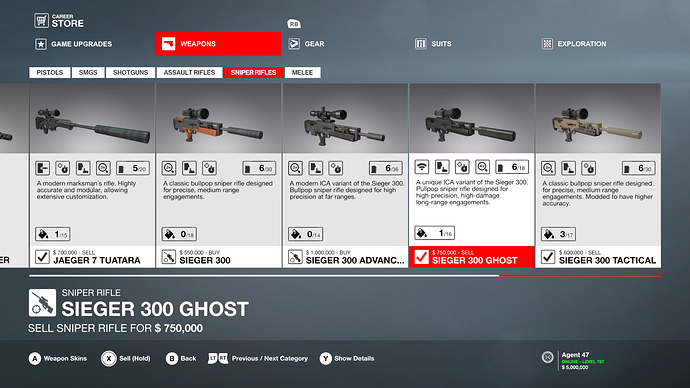 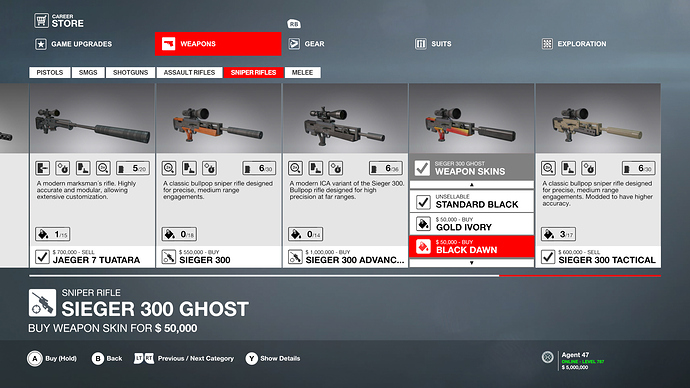 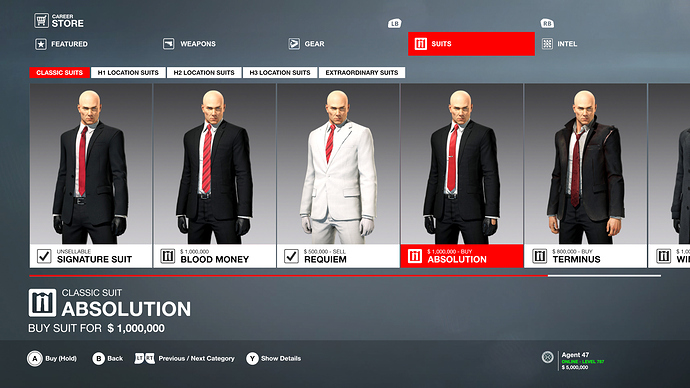 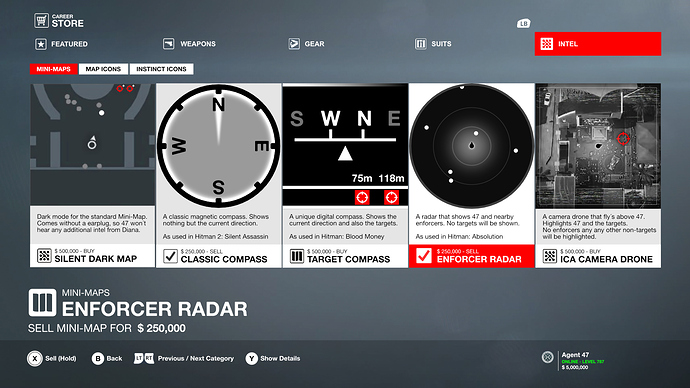 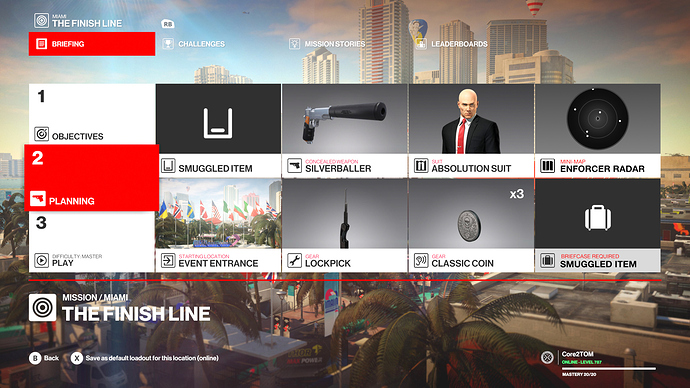 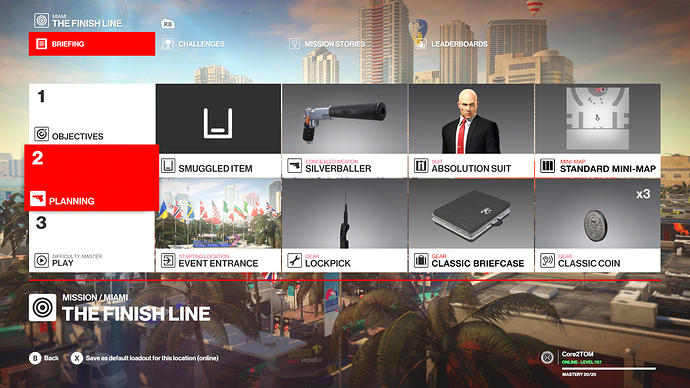 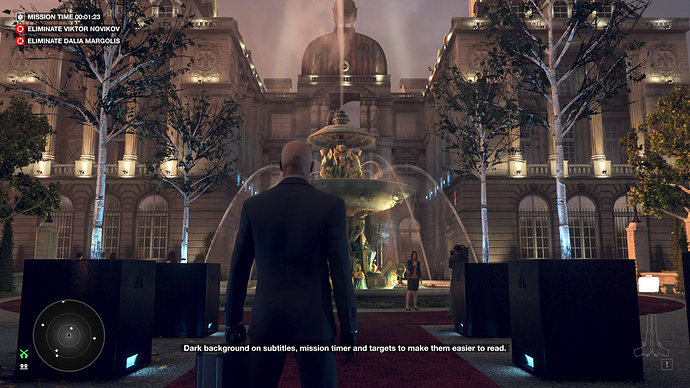 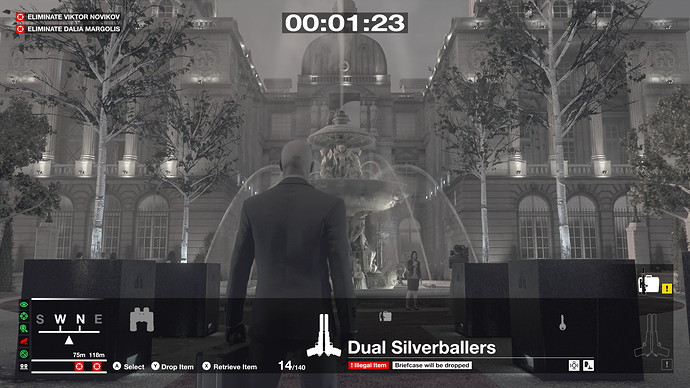 that´s it for now (hope i forgot nothing) thanks for reading. i already posted a new rating screen somewhere on the forums, but i´m still working on the mockup for it.

I think this is very well made, but I don’t mind how IO is doing things at the minute. Plus a lot of this I find a little superfluous, I mainly play without any HUD

That being said, looking at Hitman 2016’s UI and how it is now there’s such an improvement. So let them do what they’ll do

Honestly, the first thing I want to see when I start up a game is an option that just takes me to the story missions. I feel that HITMAN 2 did the Featured page (or Landing Page) just fine and no new player is going to be confused on where they need to go for what content they need because all the game modes are right there in their faces and not hidden away inside a small Game Modes tab.

Loved the idea of weapons skins, we have so many reskins that they might as well become options to customise the base weapon.

* always show the briefcase smuggled item slot, even if no briefcase is equiped

Not everyone enables the minimap and reducing Diana’s assistance should be an option in the settings menu so that slot is going to be redundant (still liked the idea of customising the minimap though).
We don’t need to fill in the space of the planning screen just for the sake of it, I say that IOI should have the briefcase and the concealed item in the same slot. Heck, let us put the concealed weapon in the briefcase in prep menu so the moment we start the game, we don’t have to swap items out of the briefcase with the weapon.

image1618×212 82.7 KB
But really, I wouldn’t mind using some intel items as throwables but they should organise the inventory better by having it sorted in alphabetical order or item type.
Or just don’t make us scroll and use a different menu system instead. I have a mouse and a controller with thumbsticks, take full advantage of them IOI.

Anyway, I appreciate the effort you put into these mockups, they look pretty good.

All I’ve got to say to the OP…

Looking for a career in Copenhagen or Malmo? We're looking for the best people from all over the world for our exciting and upcoming projects!

All I’ve got to say to the OP…

Looking for a career in Copenhagen or Malmo? We’re looking for the best people from all over the world for our exciting and upcoming projects!

Btw was there anyone on this forum who got hired at IOI or at least became an intern there?

Lots of interesting ideas I would consider to “make them a toggleable option”.
IO imo did a great job at making tiny aspects customizable via the game options. This could be expanded on as long as it is reasonable.

Personally i do not like e.g. the Destinations screen you created. It looks a bit claustrophobic and doesn’t reflect that each narrow button is a world of its own.

i like the idea of having the ability to buy skins and suits with in-game currency. i think it would help solve the problem of clutter in the inventory. instead of having like ten different ICA19s, you could just unlock the silverballer with its default skin and choose to buy what skin you want (chrome, black lilly, goldballer, etc). i’ve always wanted to have the classic wood finish on the sieger 300 ghost.

but if IOI makes earning money tedious and difficult while also giving the player the ability to buy in-game currency with their credit cards to “skip the grind”, i will be very annoyed lol.

a favorites toggle would be very useful as well. it would only show items and suits that you have marked as “favorite”

yeah i know my destinations screen is bad, i just tried to create menus without scrolling. nvm it was just an idea

thanks for the feedback

I love the idea of the community challenges. Especially when paired with a monetary system. I could see them as easy ways to give players a good boost of money every month or every two weeks.

It was mentioned before but your tab for the levels is a little too strong. I think you had it in reverse. Instead of putting the level different versions at the top and all the locations to the right, it should be reversed. So all the different locations are in the red at the top, maybe further broken up by game, and the special variants of the level in the white boxes. This would keep it from being overwhelming while still reducing the scrolling imo.

I am not a speedrunner and I would LOVE to see the “end game stats” when playing story mode. I would honestly love to see it and your design for it is really nice!

Now specifically about the money system. I’ve been thinking about it for a long time now, and although I don’t want them to bring it to HITMAN 3 when it comes out. I am hoping the future of HITMAN whatever it may be after this trilogy is completed will have it.

I love a lot of what you have on the monetary system. Except (as you said) the values must change. No one want’s to pay 1 million dollars for a white suit. I don’t care if it is made with actual diamonds, its not worth. So yes all the figures used as examples will of course have to be adjusted to be more realistic.

As for the radar bits you showed. At first I thought “oh thats cool!” but after thinking about it. I am not sure how much I like it. If the base radar is how it is currently in the game, buying anything else would be kinda, useless. However if you don’t even get a radar when you start out and you have to buy it, and upgrade it then I could see that.

While throwing key’s as extra distractions does make sense. The current weapon wheel is already super chaotic. It would need some major fixing before they should try to include that. I am one of the few that is in favor of the stacked wheels design. Where pushing up will change the wheel on screen to a different “tab”. For example you open the weapon wheel and it defaults “Items” so it is showing you your coins and what not, then pressing up will change to the “weapons” so it will show your all the guns you are carrying, pressing up again will show whatever else. Obviously this would have to be broken down in a way that makes sense. But the endless circle we currently have is already bad enough, adding keys and keycards to it would make it beyond annoying.

But I would love to hear more on your idea of the money system, since I myself have been going over it in my head for ages now on how it could work, ways it could be used and essentially building an entire Hitman game around it, so I’d love to see any other idea’s you have on it.

Great work overall! How about a mission selector using a world map? This would also eliminate scrolling while at the same time decluttering the destinations menu. 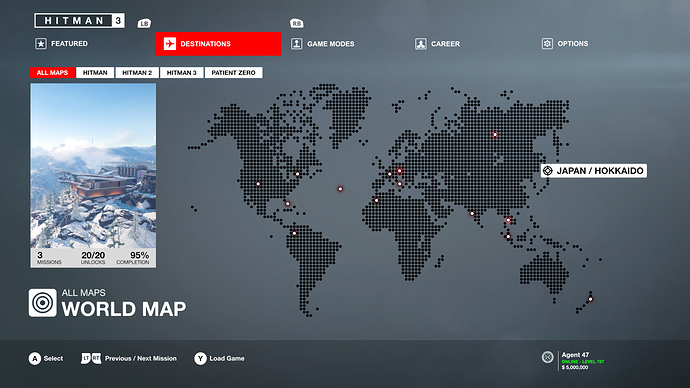 That might be a bit too simple. But it did make me think of the map in the background of the title-screen from 2016. Mmmmaybe if it panned to the different locations and had a white target symbol that was parallel to the map surface …? I don’t know. It might look nice, but I’m not sure if it’d be all that practical. 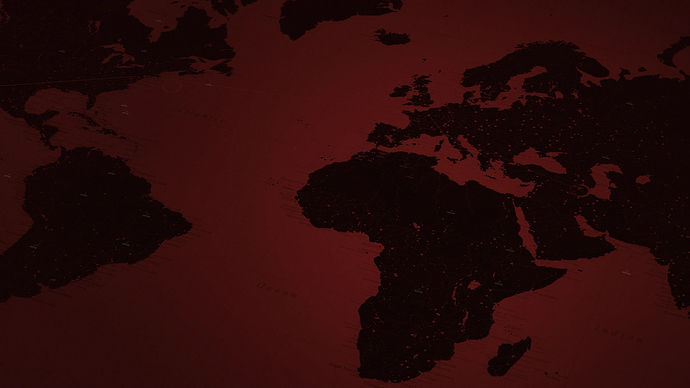 You’re too good for your own good

Those mock-ups are at a professional level! I do wish we had a money system, but I guess it would be too late to retcon it onto a pre-established game

Not bad at all! Fits the minimalistic style. Though if you are not satisfied with this variant, maybe, make a bigger map so a player can scroll it around. Or just add a zoom option on this one, you got the idea.