Hello friends, most of this work has so far been relegated to the modding thread, but it’s content for all PC players to download and play so it’s time a thread was created just for the release, discussion, review, playthroughs, etc of modded missions in Hitman™ 2.

This thread is for all modded missions from the community, but here is the latest which happens to be by me And just because it’s so far the biggest mission mod to date, I will leave this here with full explanation: Adds a mission to Sapienza where you can choose who to work for, and which objectives to do. Inspired by the style of Dishonored.

Choose Your Own Adventure Mission: “A Case Most Peculiar” 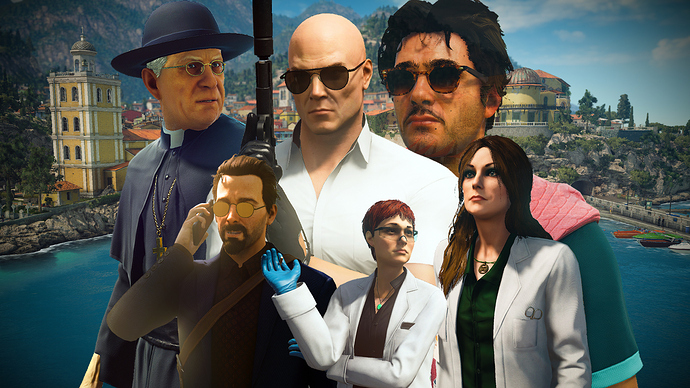 Promo1920×1080 998 KB
It is my proud honour to present to you the first ever mission in the Hitman series where you can choose who to work for, on top of which objectives to complete along the way. Taking heavy inspiration from Dishonored, in which you’re an assassin who is always given a non-lethal way of passing your mission, this mission will provide you with an experience never before offered in a Hitman game.

ONLY WORKS OFFLINE MODE WHERE IT WILL REMOVE “ARRIVAL” FROM THE PROLOGUE
and will appear in the Sapienza destination tab.

To enter offline mode, simply press Enter (Or use your mouse to click “Cancel”) when it pops up saying “Connecting…” on game launch. If you want to stay in offline mode every time you launch the game, go to Options>Privacy and click “Opt Out”, you can return to online mode by pressing “Opt In” at any point.

Questlines1406×518 559 KB
In this mission you’ll be faced with an initial choice. Do you want to work for Caruso, or for Sapienza’s “Concerned Citizens” who want to take him down? The way you make this choice is by completing the objective of faction you want to work for. 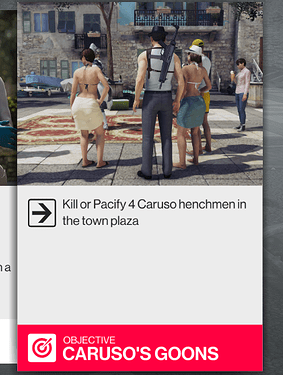 Choice422×557 243 KB
For almost every single objective, you’ll have a choice of at least two options on how to complete it, similar to either grabbing the data core or the three hard drives in Golden Handshake. However apart from the very first objective of the mission, these choices will not take you into a new questline. Although you may have the option to make a last minute switch of allegiance 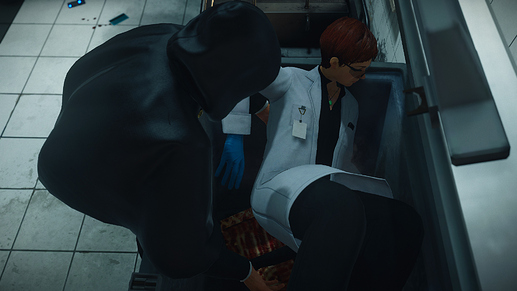 Capture1920×1080 519 KB
Some objectives will give you the ability to deal with a target non-fatally. To make sure a target is out of the way for the mission, or stashed for a retrieval team to take into custody later, just pacify the target and put them in any container . Due to the game not letting you put painted targets in containers while alive, these targets will not show up in Instinct (Think of them as Elusive targets).

Another aspect ‘borrowed’ from Dishonored; since this mission only works offline and doesn’t give you stats, it’s only fair I give you something to reflect your gameplay style. Currently this is a rudimentary kill counter. Depending which questline and choices you take, it is possible to only kill targets and yet still get medium chaos, think of this as an excuse to use the non-violent options available to you. This Chaos Level does not affect gameplay or the mission.

There were some things I would have liked to have done for this mission but simply don’t know how; without access to more of IO’s files (Like The Mills Reverie escalation script, which is only stored on IO’s servers and I don’t know how to access) I have no idea how to make improvements (Such as requiring targets be asleep, as opposed to just tranquilizing, where they can then be woken up again yet the objective still completes) so I don’t think there’s too much I can do to update this particular mission.

Also, only about 10 people have played this so far, and no issues have been reported yet but if you find any then please post them here. Mission made using mod scripting. Kill a series of targets on the Training Yacht where you won't know who you have to get next! (Unless you memorize) Embrace Of The Three-Headed Serpent

Combines the main mission and the special assignment into one big contract for Santa Fortuna. This mod allows you to play The Showstopper mission with the holiday map from Holiday Hoarders.This also contains an additional mission where you can kill all targets from Showstopper and Holida This MOD add one custom misión

What type of modded mission would you like to see next?

Keep in mind a new mission can only be added by replacing an existing mission, so there’s a finite amount of missions that can be put in before they start conflicting with each other

Man this is awesome!
You’re good!

Looking forward to your next missions

@KevinRudd I remember there being an escalation where on Paris the bartenders at the party by the bar where replaced by CICADA guys with shotguns.
I wonder what can we do with this

Yeah, I’ve gone through every escalation listed on the HitmanWiki and looked for points of interest, I took note of that one

Might try Marrakesh first before I try Paris though, since Marrakesh lends itself better to having factions to choose from, in my opinion

EDIT: I’ve decided I’ll go through all the Paris Escalations manually to see if it has more potential, I might just not make it a Choose Your Own Adventure if I can’t think of a decent story for it though. Might just make it a “Variety Hour” with a bunch of interesting and weird but hopefully fun objectives

I can help conjure stories if need be.
Heheh

I can help conjure stories if need be.

Oh, yo. I could totally help as well.

There’s many factions part of Paris that you could use (not specifically all in one mission).

Depends what the potential objectives are

Like I said, I’ll have a look and a think, but for stories it’s not standing out as much to me as Marrakesh with (the real) Crystal Dawn, Zaydan’s forces, and the Freedom/Democracy Protesters

specifically, to what extent can we mod each level?
added NPCs?
added items?

is it to the extent where we can effectively make our own special assignments?

As stated above, nothing can be done except putting in changes they’ve made in escalations.

Some story lines I could think of:

Most of those are just generic kill objectives which can be done in contracts mode, which I’m trying to avoid, and about a third of them are impossible to do (Rescue? Meet up? These things can’t be scripted in modding)

Your MI6 list sounds okay (but I’m hoping to improve on my Sapienza mission, rather than make something that’s the same or tamer), though I don’t see why MI6 would protect Novikov

for escalations the notable additions I could find were:

Sabotage IAGO Auction
Hack the laptop in the Basement (Security Override, 20 second timer)
Hack the laptop in the Museum Office (Security Override, 20 second timer)
Hack the safe on Level 2 and retrieve its contents. (Voltaire Suite)
Speedboat exit only
Super enforcers (All guards can see through all disguises)
Shotgun Guards > Auction Staff and Palace Staff
Tripwire Laser and Mines (I don’t really think ppl like these)

Yes, I’ve gone through every map and made a list of these things; and yeah I think I’ll pass on the whole laser/mines stuff

The safes usually only have a bottle of vodka in them, which isn’t really helpful for trying to craft a serious story :S

Majority of gameplay complications are actually only kept online, so sadly can’t be replicated in mods (Things like “Kill all targets within 30 seconds” “Hide all Bodies within 90 seconds” etc)

My rationale for why MI6 would protect Novikov is that IAGO is worth more to them intact than disbanded, since the intelligence they provide can be amazing for both national defense and black ops. If Novikov is taken out by other parties, IAGO loses the front that they operate from. Hence the objective to capture Margolis (the mastermind) but keep Novikov alive.

I like coming up with stories, here’s a fast written Showstopper one, rare flesh and bones that needs refining but could work. Will come up with more maybe later

Not bad, interesting thought with the Helmut phone retrieval, I like that kind of idea; BUT I can’t program making the call or having her pick it up, nor can I program emetic poison, nor anything to do with camera stations at this stage (Though a generic laptop hack could replace that), and I’m pretty sure Hailey Brennan doesn’t die in any circumstance unless you personally kill her, so doesn’t really seem like an objective if all you gotta do is not kill her.

Also, don’t forget this was for a Choose Your Own Adventure, so would be good to have some choices along the way

I can’t remember the exact list, but currently the only things I know how to script as success or failure events are: Kill, Pacify, Hide body, Hack Laptop, Destroy Laptop, Pick Up Item, Drop Item, NPC gets bodybagged (Anything else, I don’t know how to do and can’t seem to find out; if anyone else knows others, please share!)

Anyway, it seems this thread is being eaten up with story and objective speculation, which isn’t what I wanted

So I’ll leave it there for now. I was more hoping people would give feedback here on the Sapienza mission I did, or any of the others in OP

Happy Holidays, everyone.
Here’s a mission mod for Paris:

This mod allows you to play The Showstopper mission with the holiday map from Holiday Hoarders.This also contains an additional mission where you can kill all targets from Showstopper and Holida

Hello everyone. I am kind of new here. But yeah. I would like to present my modded mission as well. Here is the link: 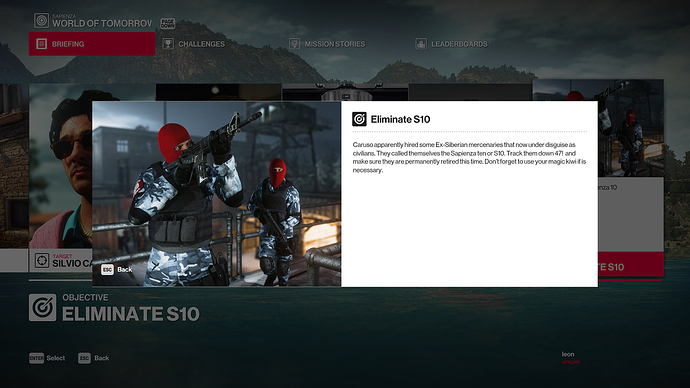 I edited the vanilla sapienza by editing extra target to kill.
You will start in hokkaido ninja outfits equipped with standard ninja gear with 4 magic kiwi (throw it and it will turn into weapon)
It shared a same spot with @KevinRudd sapienza mission. So you can only play one on each startup of game and you need to swap around the patch in case you wanted to change the mission.

ah. by the way, i updated my mod. so i strongly recommend you to play on casual difficulty first and then professional and then master. you will clearly see the difference. try to play on casual first in order to understand who are your target

here are the new image of the mission and the load out i have prepared: 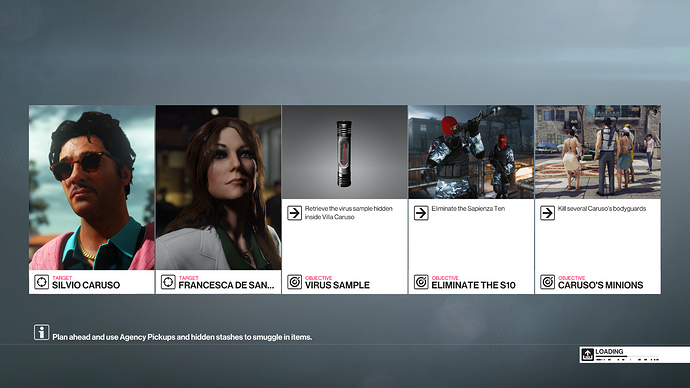 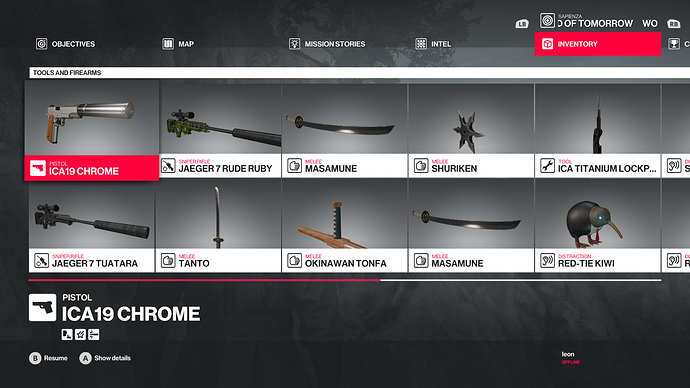