i hadn’t seen a thread about this, but consider this the thread to talk about the new generation of consoles.

Ehh, that price difference seems a bit too far-fetched. I’d expect at the very least 500$ for the Series X, but if there’s a lower-power model like a Series S? Probably 350-400$. 300 seems way too low for what’s supposed to be this powerful leap into next-gen.

The ‘Series S’ sounds like a model built to run whatever X games are at medium-low settings. But then again, we have no idea if it’s real or what would be packed into it.

I still can’t believe we’re in September and the prices and exact date hasn’t been revealed yet. Microsoft and Sony should just do a rock paper scissors and one of them reveal it first, it’s getting ridiculous.

On the other hand, I’m not happy that the Xbox Series X is released with no games backing up its hardware capabilities.

i hadn’t seen a thread about this

Here are a few:

So we know that H3(III) will have not only next gen ports but the legacy pack support of the first two games. I’m wondering how is that going to work? Hitman 3 will be the first Hitman game for these new systems. Will they port H1 & 2 separately to the next gen systems? Will it just be the DLC? Will there be an option to buy the full trilogy on PS5 immediately? Or will the legacy levels be included by default in H3 PS5? I also wonder just how much better graphically it will be compared to the …

What do you want with the next generations of consoles? Videogames

I decided to make this topic, which is inspired by the What I would like to see in Hitman 3 topic, so we can discuss the next generation of consoles, from both Microsoft and Sony, and what we want with them and also because I don’t think there’s a topic discussing these consoles anyway. Here’s a list of stuff I want with the new Xbox: Crossplay with all first-party titles. Since Microsoft release all of there first-party titles on PC now, I think it’d be awesome if all of them launched with…

Although I’m looking forward to the PlayStation 5 there isn’t much I’m hyped for yet except the rumoured Silent Hill reboot which probably won’t happen. To be honest the graphics in the Dubai trailer doesn’t blow me away although I know the game isn’t finished and the footage is probably from a much older build. I have no doubt that IO will push the older consoles to the limits but will the next gen version be a big upgrade? Bear in mind Hitman 3 is being developed with an older game engine so e…

Hello everybody. Today I have a question that I struggle to answer myself when purchasing a title that is available on current and next gen. For instance, Cyberpunk 2077 or Marvel Avengers. Said to be coming to both PS4 and PS5. Without double dipping would you rather get the PS4 version or wait till the PS5 version to play it? My instinct is telling me to wait so I can have a better experience but if this game was built from the ground up on current gen hardware, will there really be much of a… 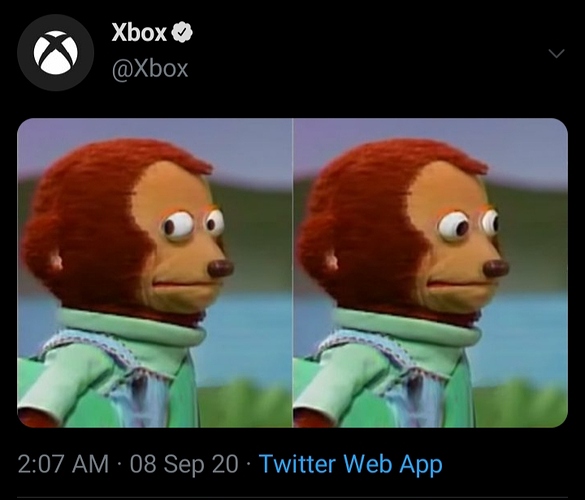 saw those already. none of them are for news about the next gen consoles themselves. more like wishlists and game discussion

The Series S was leaked a hour or two ago, I just got dragged out of bed cause of it. Windows Central Confirmed Prices.

Wasn’t there a substantial sized leak about the prices recently? I feel as though it’s their response, like the leak, or any parts of the leak, wasn’t true at all.

it seems like everybody is missing my first reply…

I saw it I’m just supporting it with more additional information… my bad.

consider me surprised, then.

I’m not the least bit upset at this pricing model for these consoles. The second preorders go available I’ll be getting a X. If a matter of days now really.

Dafuq?!?!? Straight after the leak too Omegalul.

I didnt like the idea of a less powerful next gen console at first but I’m definitely coming around to it more. if the series x ends up being 499, which is likely (although I imagine it depends on what the PS5 price ends up being), I’ll probably end up going for the cheaper option since I’m not really in a position to spend 1000+ on a console and a 4k tv anytime soon

Why does it looks like a drive-thru ordering speaker?

I’m a complete noob in these things, but what’s the drawback of Xbox One S?
I see only advantages: smaller, cheaper, but next gen nonetheless, but obviously there’s a catch. I’d like to know what it is.

It is a digital only console if I recall.

Fortunately Microsoft is doing a financing system for the new consoles which is straight forward from what it seems so it makes their consoles more accessible if you can’t outright afford the Premium Version of it in full right away.

This console generation is gonna be interesting especially for launch. While PS5 has games it’s been confirmed that accessibility will be scarce if you wanna buy one. With that I’m certain the PS5 will overall be the more expensive one in terms of disk less consoles, but only time will tell really.

For Xbox, Phil Spencer has said that production of the new consoles hasn’t been affected do to the pandemic. We can’t outright confirm or deny the legitimacy behind this claim til Launch or when pre orders are available. Price Scalpers will be having a field day this season unless Microsoft and Stores limit how many you can buy per household in terms of preorder. While Xbox doesn’t have big titles at launch which doesn’t particularly bother me, but that’s just because everything else such as.

this for me speaks more volumes then a Spider Man PS4 Spin-Off and another year of Call Of Duty Exclusivity. While that’s the consensus from those Sony Fanboys on Twitter who have Brand Loyalty to the point where it makes me nauseous. By no means is this me bashing Sony since I think every platform to play on offers something new and unique. One of the most important things in terms of gaming as a hobby is preservation and accessibility of older titles and Xbox has done an amazing job with their BC Program which if I’m correct should be resuming development down the road once the New Consoles Launch since they were focusing on making sure all games that are BC and on Xbox One work for Series X/S.

But let’s be real here for a moment let’s all stop focusing hype on a Spider-Man Spinoff and focus it on Demon Souls.