Will IOI ever fulfill their guarantee? I kinda regret buying the game on Epic just to support them just because they falsely advertised, revealed this 5 DAYS BEFORE LAUNCH and they’re yet to share any more info on the situation.

Edit: And one more question, Why the hell is the Gold Access Pass priced at 100 USD? why isnt anyone talking about this?

Edit 2: YES, I am now aware that it will be fixed by the end of February.

Only time will tell

You can see in the original threads when the Pre-Launch Guide blog was first released that I was as critical of IOI as anyone else about the initial situation where Steam H1/H2 owners would have to purchase the Access Passes for Epic H3, so I’m not an IOI happy-clapper when they mess things up, but…

…I have every faith that they will fulfill their promise to make sure that everyone who bought H1/H2 on Steam and purchases H3 on Epic will indeed get their Access Passes for no additional cost at whatever point all the parties involved get any technical/commercial roadblocks removed. Their statement on Twitter was public and unequivocal that this would be the case, and I don’t think that IOI will do anything other than fulfill the promise they made because it would be absolutely disastrous from a PR perspective if they went back on their word - far, far worse than any reputational damage they suffered from the initial announcement.

I’ll happily join in the criticism of IOI when they deserve it - and to be clear, I totally understand and empathise with PC players who are frustrated they can’t play H2 levels in H3 until this is actually sorted out - but after coming out and making the public statement that they did you have to believe they will follow through on their promise. It’s just a matter of time - hopefully as short a time as possible, and it’s not ideal as things stand right now - but I’m absolutely confident they will do what they said they will do.

As said to you in other threads on the same topic, they said “coming weeks” and it hasn’t been two weeks yet. Patience.

I’m more then sure IO will deliver on their promises, however as many of us already know it isn’t a simple as we hoped it would be. In the ideal world it would have functioned like on Console, however due the fact that IO have worked with multiple partners for the PC version of this trilogy it isn’t as simple as their Console counterparts. Due to multiple license deals with different platforms on PC as well as Publishers.

Then there is the fact that as of now there is a lawsuit against Steam.

Why the hell is the Gold Access Pass priced at 100 USD? why isnt anyone talking about this?

The price for H2 Gold edition on steam is almost identical and basically EGS can’t sell it cheaper then Steam. 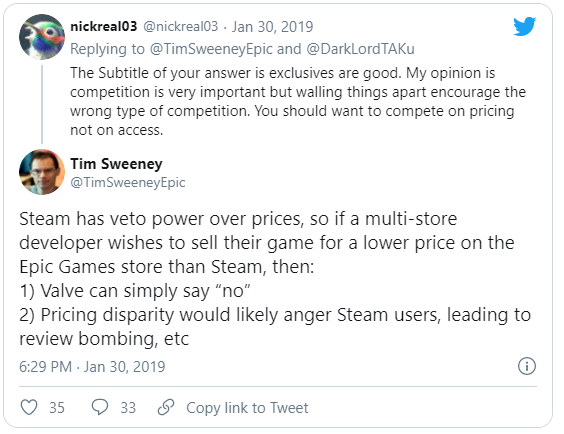 It’s very possible that they are waiting for the results of this lawsuit. IO will share something, when there is something to share. As of now all we can do is play H16 and H3 on EGS, unless we decided to buy the title.

It’s very possible that they are waiting for the results of this lawsuit.

They’ve guaranteed that this will be solved “in the coming weeks”. I don’t know how they could do that if the result of a lawsuit has an effect on this.

I’m beginning to get nervous about this. IO can make a damn excellent game, but… honestly I don’t really trust any gaming company any more; even the ones I love. I’ve been burned too many times lately.

They’ve guaranteed that this will be solved “in the coming weeks”.

I hope that is the case, that we will be able to add H2 access pack for free on EGS soon. However the reality is that this is a lot more complicated then what IO and Epic hoped for. @wincenworks can correct me if I’m wrong, however he believes that Steam is holding back on the transfer, wanting a 20% cut of H2 sales.

honestly I don’t really trust any gaming company any more; even the ones I love. I’ve been burned too many times lately.

Sadly this isn’t as simple as it looks, that IO should be holding H2 upgraded back for users who already own it on Steam. Unlike Consoles IO have to had a lot of different partners all with license claims for each title, Square-Enix, WB, Steam and now Epic. Where on Consoles they only have to deal with Microsoft for Xbox and Sony for Playstaion, here a game stays inside one platform. Where on PC, Steam, EGS, Uplay, GOG, Origin, Battlenet and so on is treated as it own platform.

I believe that due to conflict on interest IO and Epic wasn’t able to deliver on their initial promise, however due to the backlash they decided to re-approach it again. This is just speculations on my part, however we know that this isn’t as simple as first believes, that it’s IO giving us the short end of the stick on purpose.

This is just speculations on my part, however we know that this isn’t as simple as first believes, that it’s IO giving us the short end of the stick on purpose.

I definitely believe IO when they say it wasn’t their intention to screw over PC users. This is clear to me in the fact that console players got the levels for free right away. It’s still a crappy situation though, and I don’t truly believe things will work out until I see results, even from companies I love (and trust me, since I first got into Hitman, I’ve loved IO. I think they do amazing work.)

Even if it ends up being harder for IOI and Sweeney to figure out than they thought, I’d imagine they’ll still do something to honor their promise. You can’t just guarantee something, in bold print even iirc, and then say oh well never mind. They’ll figure out something.

Tbh there’s a good chance IOI still have a contract with Warner Brothers in regards to the distribution of Hitman 2 and they can either buy out the remaining months or we wait it out until it transfers back over to IOI.

Time will tell whether that contract was signed at the START of the planning stage for Hitman 2’s distribution or whether it was signed closer to release. I doubt they’d say it will be sorted in a few weeks if it transfers over in November (3 years after release).

Of course, this is just speculation but I’m pretty sure Warner Brothers would be well within their rights to block anything IOI does if they paid money for the sole distribution rights.

From IOI, in first place