Contract ID: 1-09-3611716-90
Platform: PC
Submitter name: 113A1
Contract Title: Burgess. Soldier 1st Class
Briefing: Burgess is the top shooter of the militia. He is capable of hitting headshots with any weapons. But he had an accident and can’t shoot at the moment. However, he heard rumors that there will be candidates to take his position as the top sharpshooter of the militia and Burgess doesn’t take kindly to replacement. To retain his position as #1 shooter of the militia, he must kill all candidate (And Parvati for suggesting his replacement) with multiple weapons with a shot to the head to prove he is still no 1.
Brief Description: 3 targets killed with different weapons that easily found in the map with headshot. Parvati can be killed in any way
Location: Colorado

Sorry to say but they’re only accepting contracts from the Hitman 3 locations. If you should feel inspired maybe you can still make one up before the time deadline. Today’s the last day to submit entries.

The Submissions are officially closed! Thanks for all the great contracts, we can’t wait to dive into them

Welcome to the forum! As @Tetrafish_21 already pointed out, IOI is only accepting contract from H3 locations. But this contract sounds like fun. Maybe you could post it in this thread? I’m sure it will get played that way.

Jealousy Kills!
Submitter: How To Hitman
Contract ID: 3-30-0494187-19
Platform: Xbox
Location: Chongqing
Mission Briefing:
47, do you envy the ICA? Do you envy the people who ruined your career? Living on the streets is a big ordeal, and it’s about time that you learnt to steal. Seize back what is yours from the ICA, and take some casualties along the way. After all, jealousy kills. People must face the consequences of their actions. Your targets are some of the survivors from Berlin. Survivors for now. Use a knife to your advantage. Stab them in the back when you see a vantage. 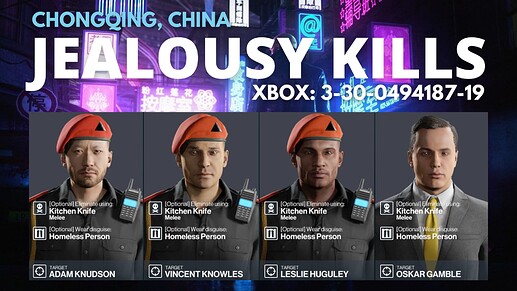 This contract focuses on how 47 envies the people who ruined his career. Ever since the Berlin incident, 47 has had to live on the streets, to remain hidden. 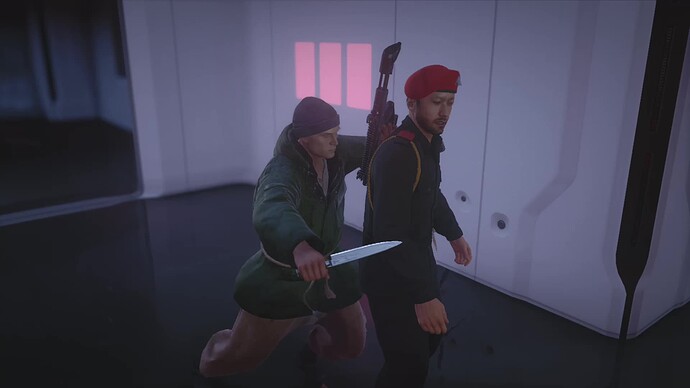 Hey @HowToHitman_YT, it might be a bit heartbreaking but the submission closed two hours before your post. So I don’t think I can fairly add it to the master list at the top of the thread. (But if @Clemens_IOI is generous, he can still add it to the list, it’s in his hand)

. It’s a fun contract, with good focus on one particular area of the map and one well oiled infiltrate/isolate gameplay loop.

As was said before, you can still post it on the fan made contracts thread.
Or from your briefing and the theme of your contract, you could also repurpose it with minimal changes for the next season, the season of wrath.

[quote=“LandirtHome, post:60, topic:11916”]
Hey @HowToHitman_YT, it might be a bit heartbreaking but the submission closed two hours before your post. So I don’t think I can fairly add it to the master list at the top of the thread. (But if @Clemens_IOI is generous, he can still add it to the list, it’s in his hand)
[/q

It was close to the deadline, I see no harm in adding it to the list.

So it was said, so it will be. I’ve added the submission to the master list.

(In Diana’s voice)
“The contract has been approved 47, you will find your briefing at the usual location. I will leave you to prepare.”

Thank you Clemens, that’s very kind of you

And thank you @LandirtHome for helping me out. I think I’ll have to practice using the reply button from now on …

What a guy. @HowToHitman_YT makes great tutorial videos and I bet it’s a solid contract.

The first test runs I was doing while making my contract, trying to get a feel for what I thought just worked - I was going to have the 5 guards near the room in the contract; ‘Look At All Those Nice Weapons’ be the targets - for a short, any method, kill-streak contract. But I was going in dressed as a Block Guard. I was going for something that was a play on the game ‘Watch Dogs’, but having never played that game I couldn’t be sure it would’ve worked. So then I went with a Homeless Person disguise, then thought there’s about 5 different types of guards - so why not 1 from each area?

At any rate, good luck getting picked.

Now that the submissions are over and since we are giving our opinions, I can give my favourites on Xbox.

Also thank you to ColdDayInHell for his return in PM on Chiku138’s and my contracts.

I know it’s impolite to advertise oneself, but I’m kinda proud of my Heist/Infiltration Contract, Active Resignation, so if anyone has returns on it or ideas to improve the concept, I would be grateful.

I didn’t realise there was another jealousy kills. I suppose you could say great minds think alike.

If needs be I can change it’s name to ‘Stabbed In The Back’.

Since I’m skipping the Colorado Elusive Target for the Season of Envy, I instead played some of the submissions on Xbox. Not counting my own or any of the recreated contracts, just the OG. And I got a few favoruites that I am happy to talk about.

Out of the 5 that I played that isn’t my own, both the Dartmoor levels stand out in their own way. Even though I was a little concern that they both didn’t have any objectives or complications, I still played it and enjoyed it just as much as a contract with any of those additions. Goes to show that if you have a great briefing and a strong idea in your contract, it can make the experience feel great which can attract any player to play your contract. Thinking back on the three that I submitted, it made me realise that my Dartmoor one that I submitted was pretty much crap. My Berlin and my Mendoza one still stands out though, the former is definitely a fave to a couple of guys in the forums, and the latter is basically a classic for me with a strong idea on usability which is open for any player on any skill level. The Mendoza one that I’m referring to is A Grape Travesty. I designed it to be open to make it easy for any player, even the ones that only started playing Mendoza as new players of Hitman 3. It is also achieveable with a No Loadout or Default Loadout since the items you need to eliminate these targets are already available in the map. I recreated this contract 3 times since launch and still enjoy it to this day with minor tweaks in each iteration. It’s a classic for me and would be a new classic for anyone.

Either way, I am looking forward to sharing more contracts in the forums, and with Wrath coming up, the two contracts I’ll share would probably make a few people go mad over one thing that is prominent… complications. I already hinted at one being similar to Active resignation being like an Infiltration mission but in a different disguise. The other, simple but more explosive. Time to bring in some very explosive stuff… preferrably the duck kind, but charges will do aswell. Good luck on whoever wins for Envy Featured Contracts and I cannot wait to see what you guys bring in for the final Season of Sin - Wrath.

D’oh! I was hoping as the contracts were next week that it would still be open, but I missed the entry period due to a family vacation the past 1.5 weeks. I guess I should have brought my Xbox with me (though I wouldn’t have had internet anyways).

Now I know what envy feels like, good luck to the submissions.

Oh well. I hope that vacation turned out to be pretty nice. Even though the submissions are closed for Envy Featured Contracts, it’s never too late to play them. Might help you get inspired to make contracts for the next and final season of sin, the Season of Wrath.

I was visiting my 99 year old grandmother, so I’d say it’s a fair trade.

Already have a couples of idea for Wrath. It’s just finding the time to refine them. Between the summer, vacations, family, and house renovations, it’s been hard to sit down and play. Thankfully I caught up last month, but I didn’t get the time to start creating again in anticipation of Envy.

I test all of yours and you didn’t even attempt mine?!?

To Be or Not to Be by Viv is phenomenal, but @Viv has a long record of solid contracts… so I am not surprised to see good feedback.