Heat Stroke? Man, I hope it actually keep me cozy and warm, it’s Winter down here in Australia and it’s awthfully chilly here in Tasmania. Anyways, here are my two contracts for Heat Stroke. Both involving a knife which you need to reach Mastery Level 13 in Dartmoor, yes it’s the Kukri Knife! The contracts are; the brand new - The Kukri Police, and the return of one of my Envy themed contracts - The Kukri Komposition. Yes, I said Heat Stroke is going to get weird, but both kinda do interpret the summer theme either with being in a Hot map or hanging around with a lot of people and electronics. Regardless of how you can say it, this is my Heat Stroke contracts.

Brief Description:
Eliminate 4 Consulate Security Guards whilst wearing their disguise. They all appear in the Consulate Building at Marrakesh. Your goal is to eliminate them with the Kukri Knife. 2 as a Melee Kill and 2 as a Thrown Weapon. Once done, you only have one exit - the car in the Consulate Parking Garage. Find the keys in the Consulate Building and make your exit. For those that haven’t taken this exit, this contract encourage players to complete the Floor It! Discovery Challenge in Marrakesh. This challenge grants players the hidden Start Location which they can start there instead of any other Start Location to reduce time, making this contract very much suited in replayability. 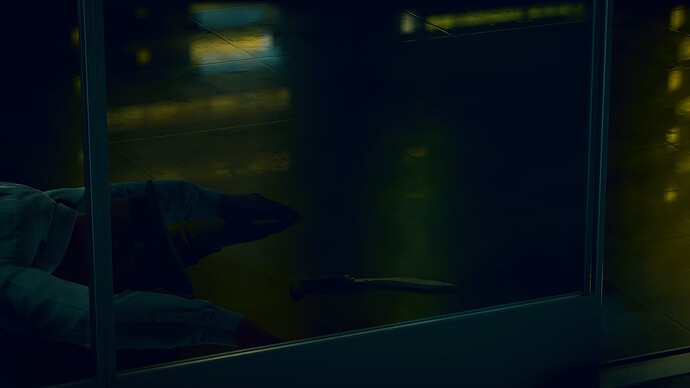 The club is living up to be the best ones ever at Club Holle due to our famous DJ Sam. That’s you 47. No-one cannot possibly take you down with the perfect composition mix. Well, turns out some nearby folks don’t really understands why you’re famous and believe that they’re better than you. Secretly they play a video game but never touch an instrument in their life. Why are you getting hated by these ameteur DJs when they should just enjoy the night? Deaths be part of The Kukri Komposition 47.

Brief Description:
Eliminate 3 targets while disguised as a DJ. A Security Guard that needs to be shocked with electricity. A female fan, that needs to have her throat sliced with the Kukri Knife. And a Club Staff that needs to be pushed/dumped twice to fall to its death. That last part is very amusing. Once done, take the Bicycle Exit. You’ll need to bring the Kukri Knife as well as any other weapons/tools into this contract to complete it, otherwise, it’s not really fitting as a “komposition” mix. You are locked to this DJ outfit in this contract and changing disguises fails the contract, so players will need to already have played a fair bit of Berlin to start in this disguise. You ready to find your mix in Berlin, DJ 47? Kill the targets and take the bike. Warm executions and a cool stroll to the exit. 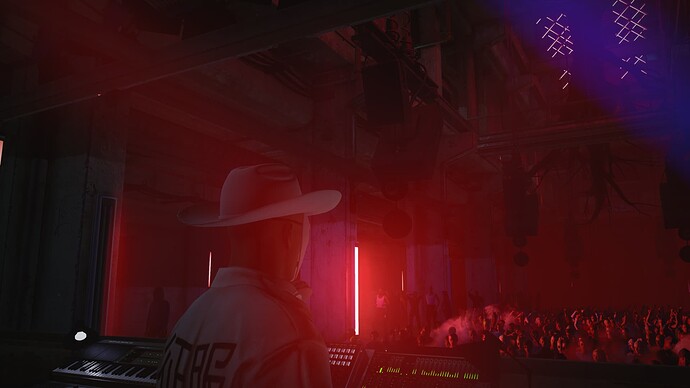 Contract ID : 1-26-843994-68
Platform : PC (Epic)
Submitter Name : Dinozafr
Contract Title : Unconsciousness will Always
Brifing : Sunstrokes are coming ! Repel the attack by eliminating the five people who work for him. If you don’t, everyone will get a sunstroke !
Brief Description: Eliminate all targets only using Sniper Rifle .Only suit . Only Headshots
Location : Haven Island
Image Suggetion : 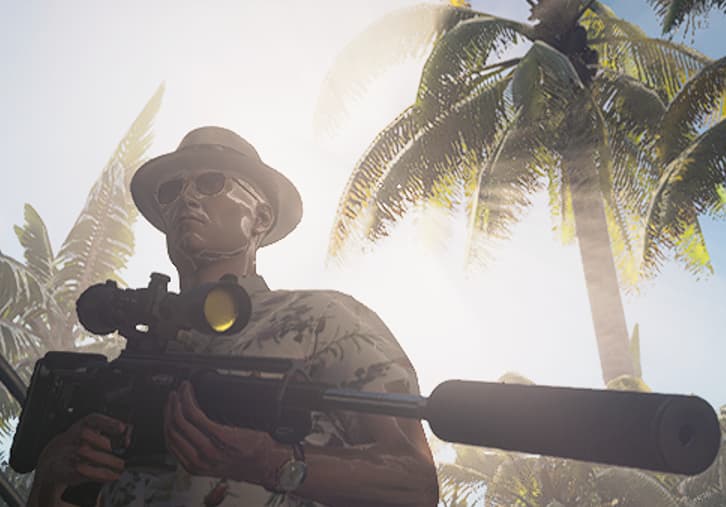 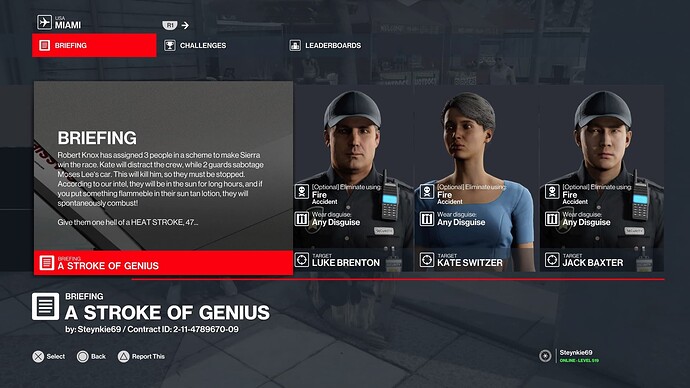 Briefing:
Robert Knox has assigned 3 people in a scheme to make Sierra win the race. Kate will distract the crew, while 2 guards sabotage Moses Lee’s car. This will kill him, so they must be stopped. According to our intel, they will be in the sun for long hours, and if you put something flammable in their sun tan lotion, they will spontaneously combust!
Give them one hell of a HEAT STROKE, 47…

Description:
Looking for some “Heat Stroke”, I discovered this little gem in Miami. Kill Kate and the 2 guards with a fire accident. Easy to figure out, and it works like a charm. The first TRIPLE FIRE KILL in Hitman history! SA can be achieved in 2 mins. 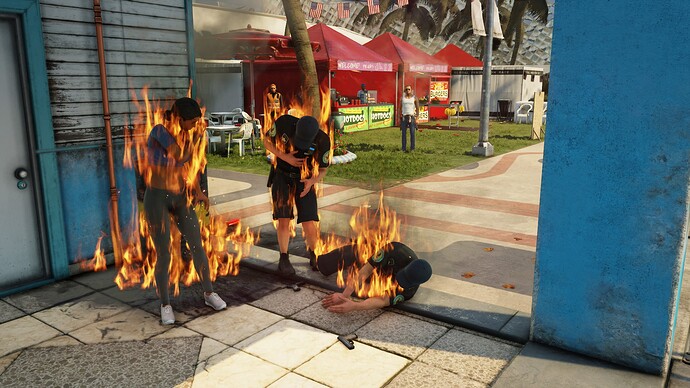 Briefing: These guys have been dying for that sweet summer tan, why don’t you help them out 47

Brief description: Since the contracts needed to be related to heat, i went and lit 5 people on fire, i then decided to go play hitman and make a silly contract to do with heat. 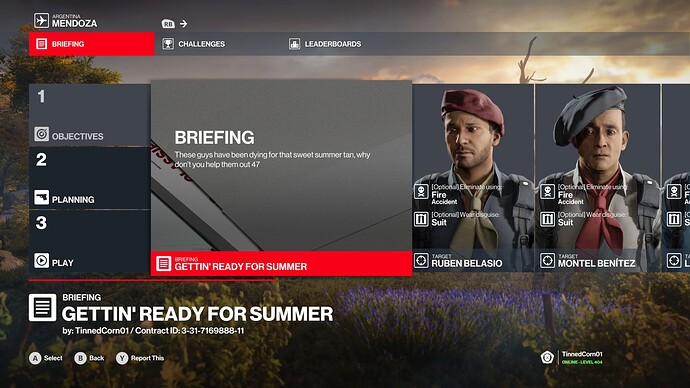 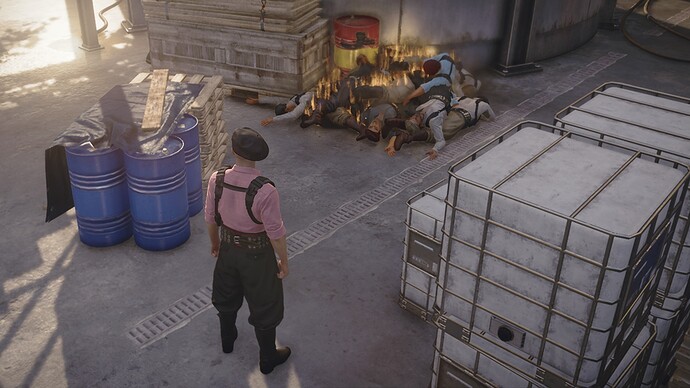 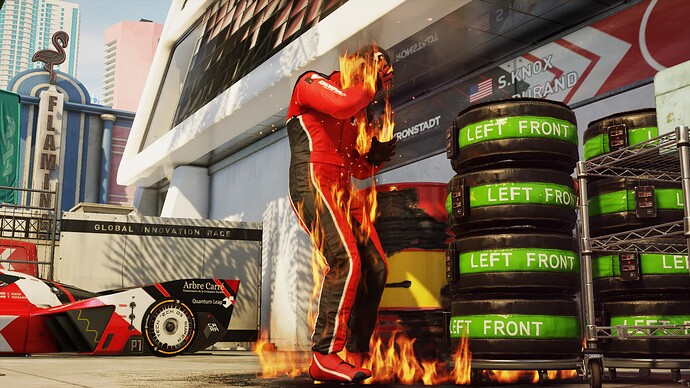 Briefing:
Milton-Fitzpatrick Bank recently hired three new summer interns to act as tellers. Upon being hired, they intentionally leaked classified information which led to an investigation into the bank. Milton-Fitzpatrick has contracted us to eliminate these three interns and the person responsible for hiring them. Our employer wants them to feel the heat, whether by gunshot or explosion. Good luck, agent.

Brief Description:
Eliminate three bank tellers and one high security guard. I chose these people because there are a few cool wallbangs you can perform to shave off time. 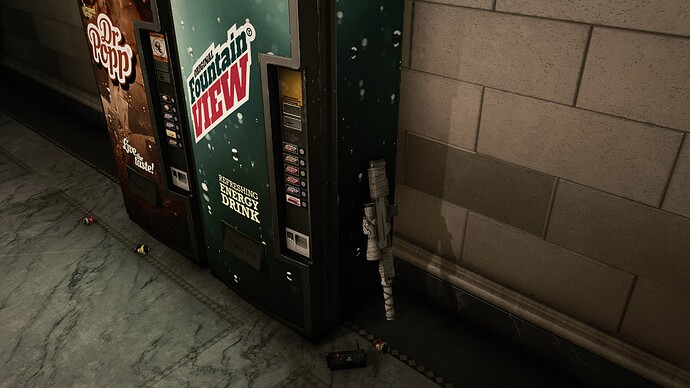 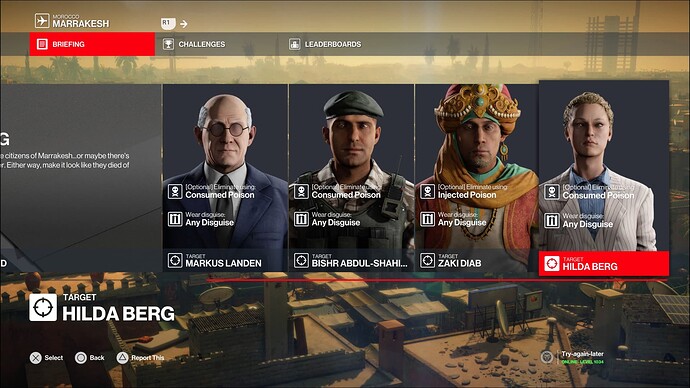 Brief Description: A consumed poison contract for some NPCs that drink water. I added an injected poison target so people have to get 1 of the 2 lethal poisons in the map, i.e. in Zaydan’s office or the underground tunnel. Targets are near different starting locations and exits so a variety of routing is encouraged. Any disguise and no complications. 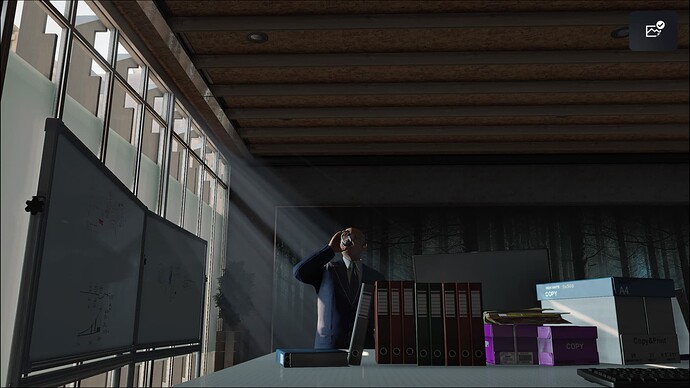 Briefing: Good morning, 47. Your contract, should you choose to accept it, is to eliminate four poor souls unfortunate enough to get involved in a scandal years ago regarding a business that was subject to anarchy and was burned down.
Coincidentally, all four targets are scheduled to be in one particularly secluded area away from prying eyes.
Elimination through fire is a must. For on this humid, summer day, an “accidental” fire would be the cherry on top for these targets.
Good luck.

Brief Description: A tough silent assassin challenge to eliminate four targets through use of fire, just to add to the heat. 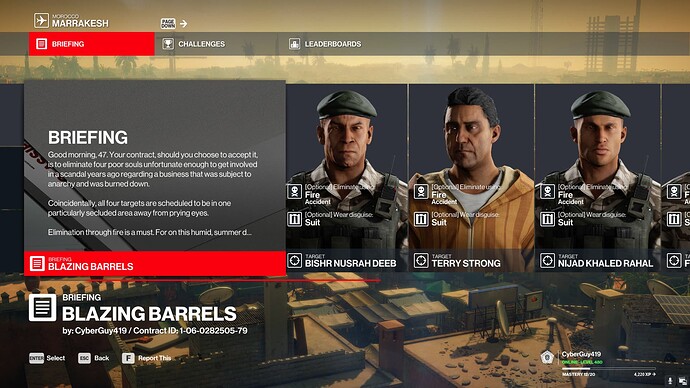 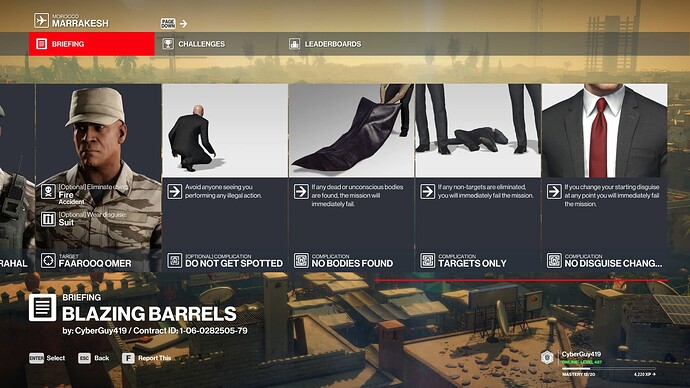 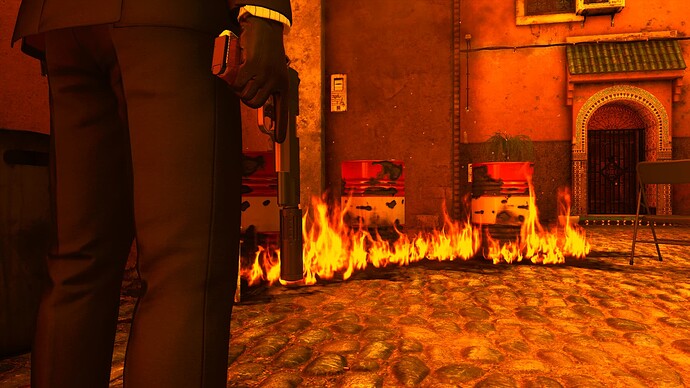 COMMON SYMPTOM OF A “HEAT STROKE”

It’s summer and you want to vacation and enjoy yourself. When it’s hot outside you are limited to the things you can do. If you attempt to much in the heat you might be vulnerable to a “HEAT STROKE”. You have 4 people that have all displayed the same common symptom of a heat stroke. “Nausea” is one of the main symptoms that all of them had in common. And that symptom was a result of being in the Sapienza “hot sun”. Help cool them off the best way you can. Even if it kills them. Good luck

These people are suffering from a “Heat Stroke” help them cool off with any form of water and or hydration that you can. 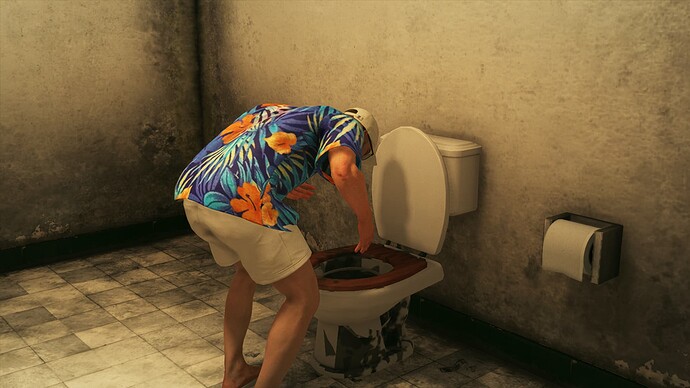 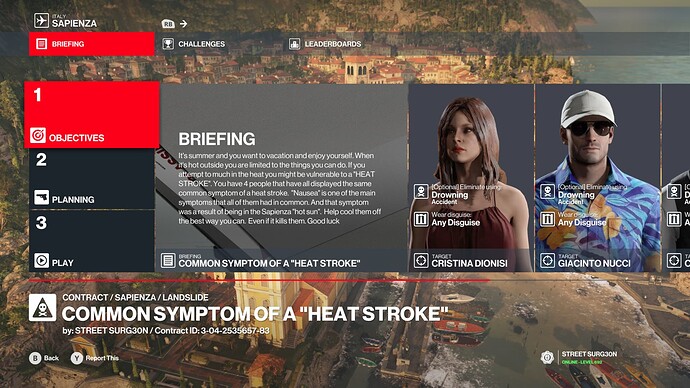 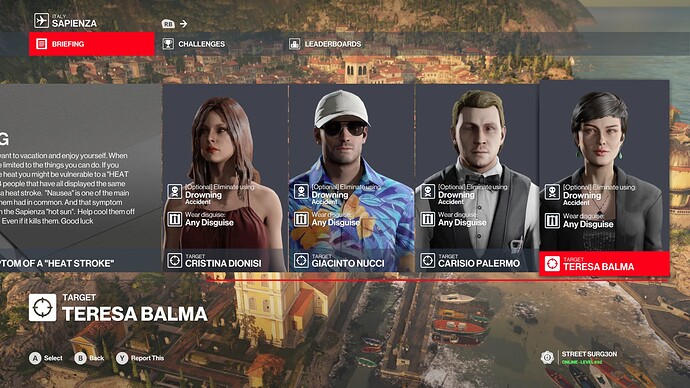 Wow. These are some HOT entries! 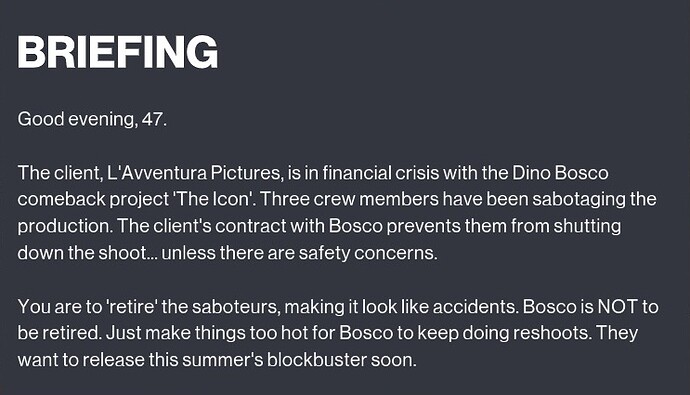 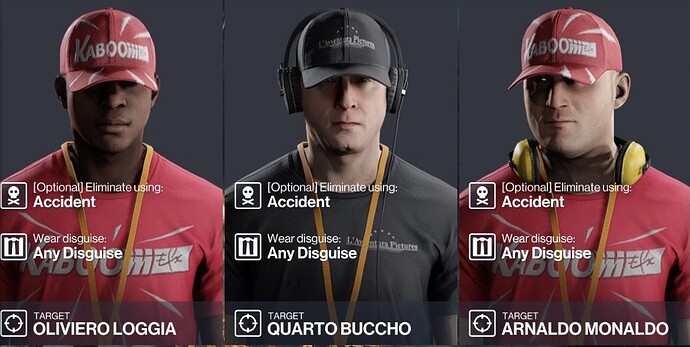 Do not retire anyone else.
Accidents don’t look like accidents if you get spotted doing them.
Eliminate any video footage of your presence on set.

So bring out your summer suit, and get creative 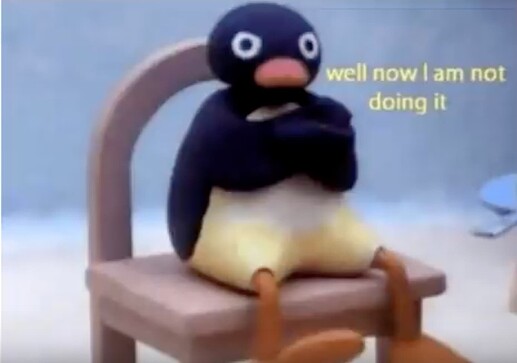 Okay, full disclaimer, I feel like this contract or something very similar has already been made. I definitely remember messing around with burning up these facility guards some months ago, but I can’t remember if that was created content or if I was just mucking about. Please please let me know if this is intellectual property theft or whatever, and I will remove the submission if that’s what’s appropriate.

Edit: It is very similar to “Brain Melt”, a featured contracted submitted by Matt Bragg of Achievement Hunter. 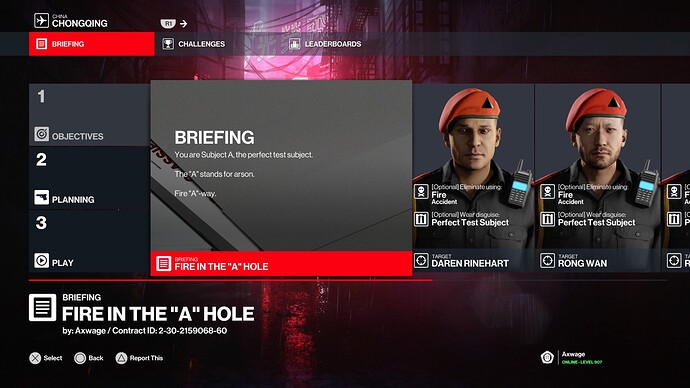 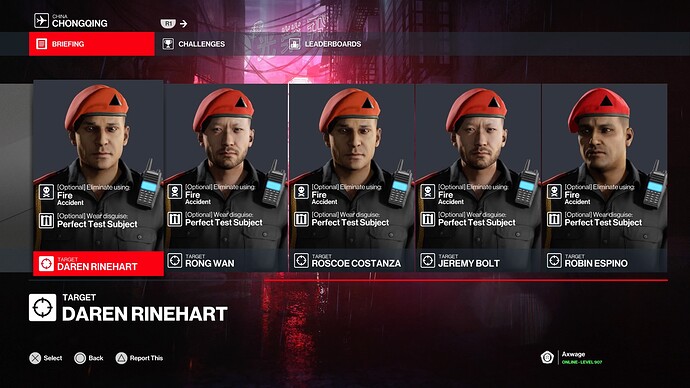 Contract Title: Fire In The “A” Hole

You are Subject A, the perfect test subject.

The “A” stands for arson.

Brief Description: I mean it’s obvious innit? I was thinking to myself when coming up with ideas, “where’s the biggest fire in the game?” I was also thinking to myself that Chongqing gets a lot of hate and is so divisive, therefore it will probably not feature in too many submitted contracts — but I love this map and think its vertical labyrinthine level design is beautiful. 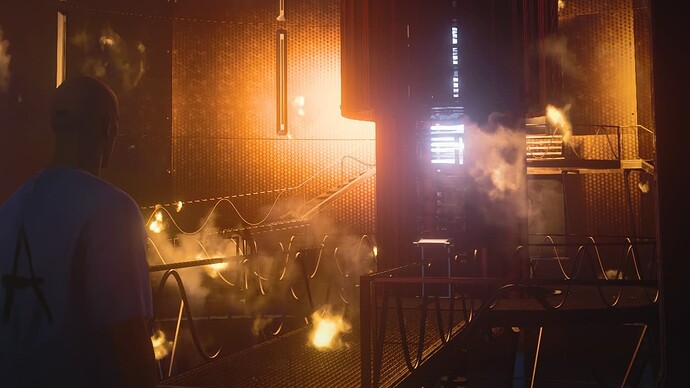 Contract ID: 1-26-8134362-23
Platform: Steam
Submitter name: Tsta
Contract Title: Hot Seats
Briefing: Summer is right around the corner and with it comes the busiest time of the year. In anticipation of this, the Haven administration has asked us to take care of some unreliable employees. Goodluck!
Brief Description: Selina is near the grill and is a slacker, James is an alcoholic and wants to quit his job, Surya is the sleeping guard, Mitch is a life guard who refuses to help the client, Jaelyn is talking about identity of one of the Haven clients.
Can be made into shooting contract too by forcing suit for each kill, but i don’t like how it plays.
Thanks to Zebulaus, Zionicle_ and NSDIB for title idea and feedback. 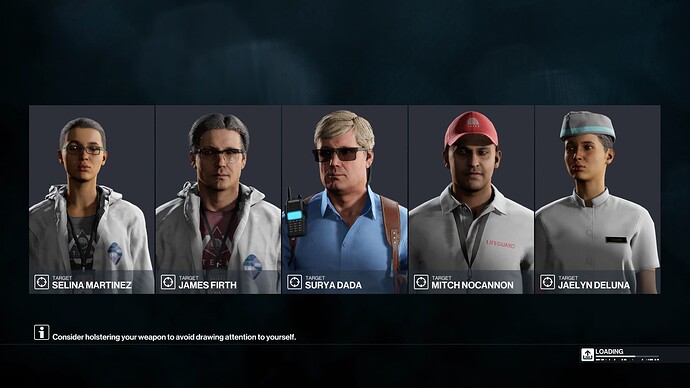 And some image suggestions: 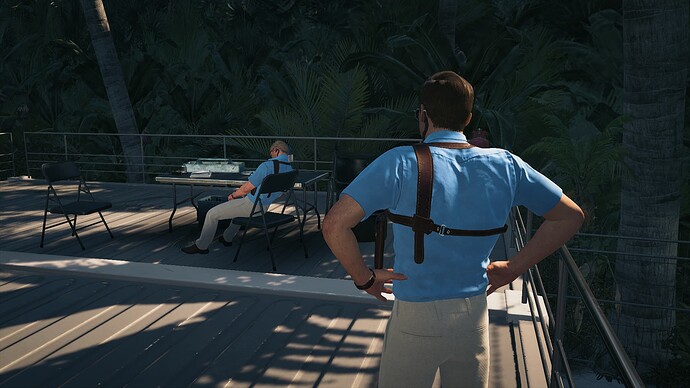 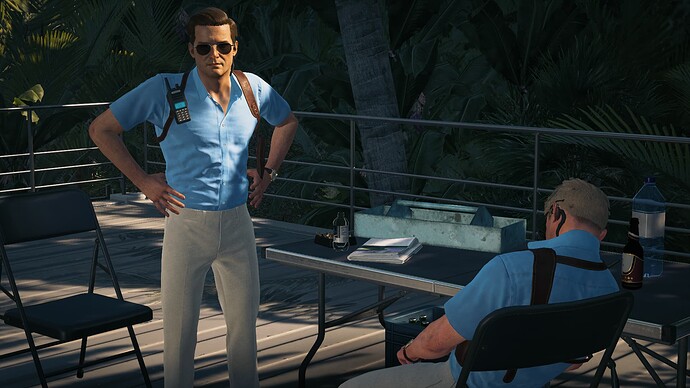 Contract ID：1-26-2612858-62
Platform：Steam
Submitter name：FreedomLee
Contract title：Christmas In Summer
Briefing：The summer in Haven Island is still very hot,but this will not prevent the arrival of Santa 47.Please bring gifts to the people here.Remember that Santa does not feel hot,so do not take off your bread and hat
Brief description：This is my first attempt to contribute. I think it is very interesting to let 47 incarnate Santa Claus to bring summer relief to haven island. Please try it!
Location：Haven Island 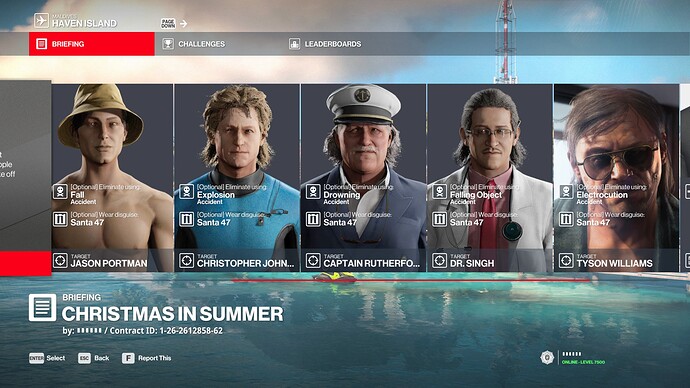 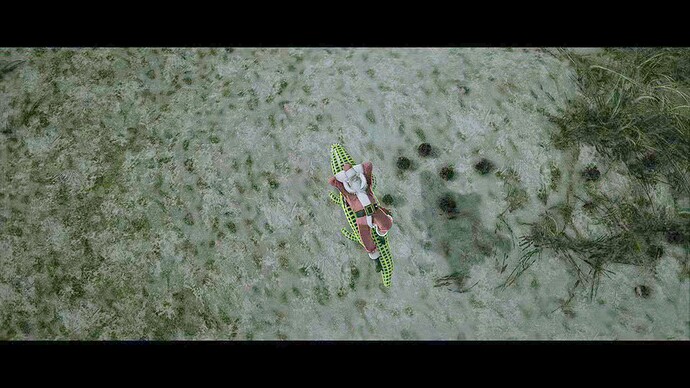 Mmm… I love the smell of “A” burning contract.
If it does get featured, I would “A”-bsolutely play it.
I do like Chongqing too, but my contract that got Featured in Rubber Ducks is a bit too “A”-nnoying for people.
Thankfully my two Heat Strokes ones are “A” bit fun when I played them. Even though you’re probably wondering why it relates to “A” theme. Well, I just wanna submit “A” contract that involves Marr-“A”-kesh. And “A” fun contract does have some challenges. So just make them use a weapon and kill them with the weapon. Simple.

Yeah, it’s “A”-lready weird in this post and this thread. I just wanna see how long I can keep making the “A” joke run in “A” post because of your contract briefing. I love it. Don’t change it. I did an “A”+ job on it.

Contract ID : 1-27-9333721-68
Platform : PC (Epic)
Submitter name: Dinozafr
Contract title: Good Sun !
Briefing：In Dubai, there is an AI that controls the sun. However, it is out of order and wants to subdue everything that is in the Art Gallery. And you have to help the AI do that. Otherwise the AI will take over your brain! And the AI asked that the bodies not be found and you not be noticed. And that you leave with the help of the elevator. You still do not live. Good luck in fulfilling orders !
Brief Descraption : Only Accident , Complication : Do Not Gen Spotted , No Bodies Found .
Location : Dubai
Featured Contract Image: