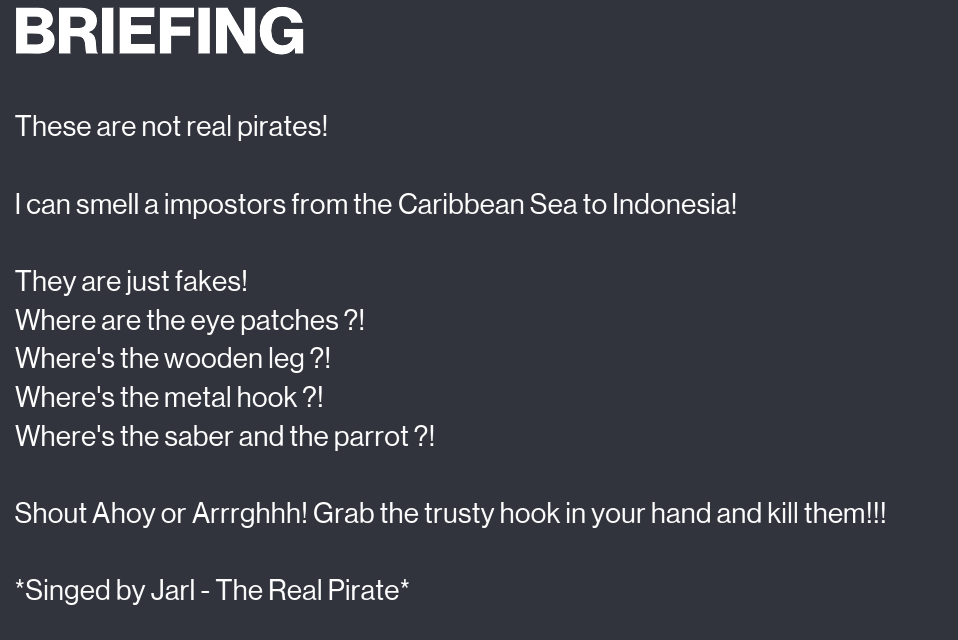 Brief Description:
Quite easy and uncomplicated contract. Pacify whoever you want (but hide the bodies) and kill targets - the guy by the hook only requires a melee kill, not a hook - a little help for people who dont have hook from unlocked. But, to not make everything too easy - there’s only one exit - boat - locked by hidden key. 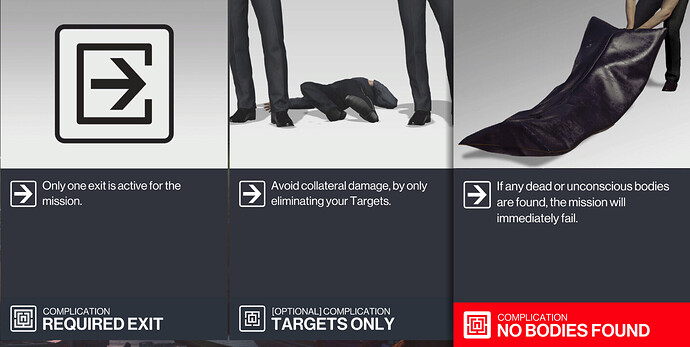 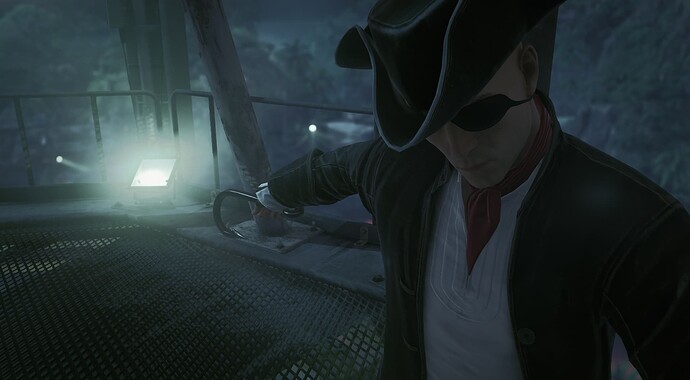 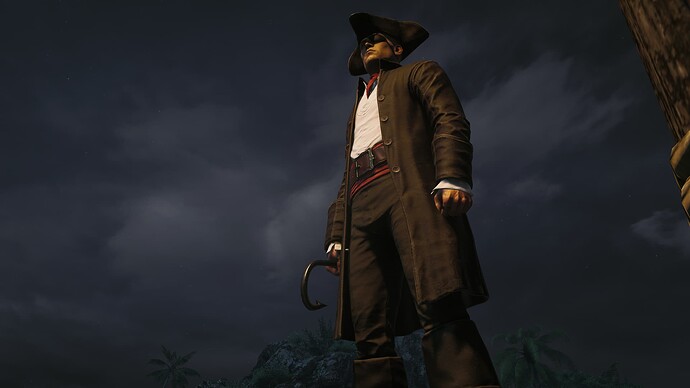 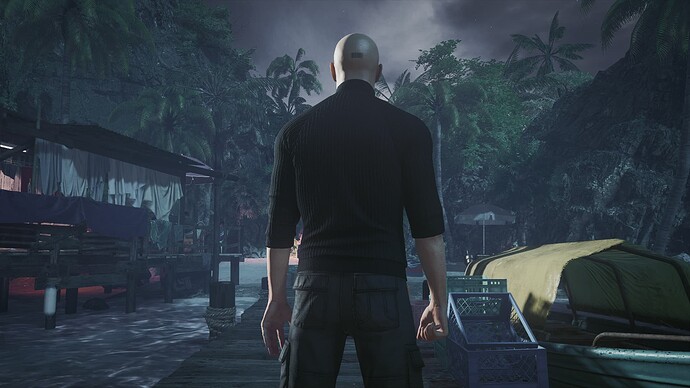 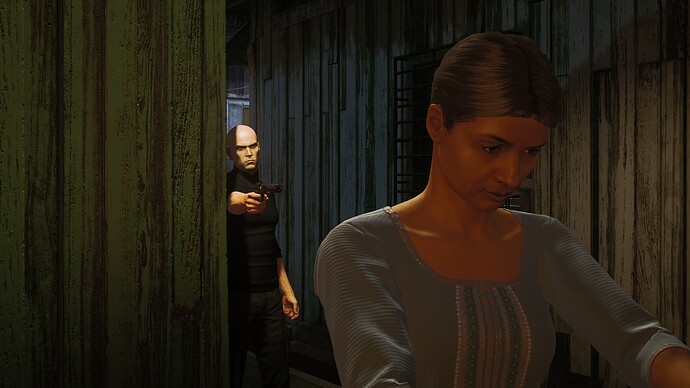 Briefing:
Agent Smith
Every time he tries to escape with the help of others
It has become hopeless
You have to get him, he’s the one who helps him
good luck 47
Location:Ambrose Island 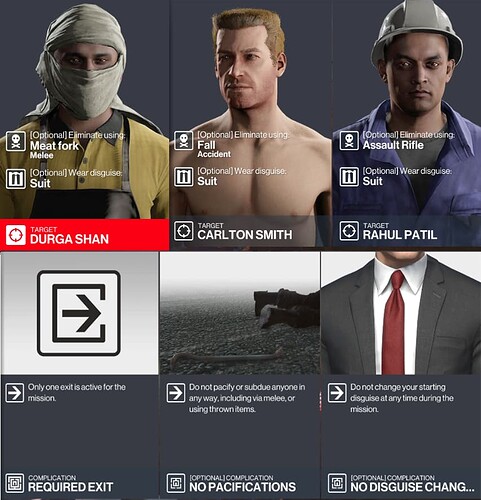 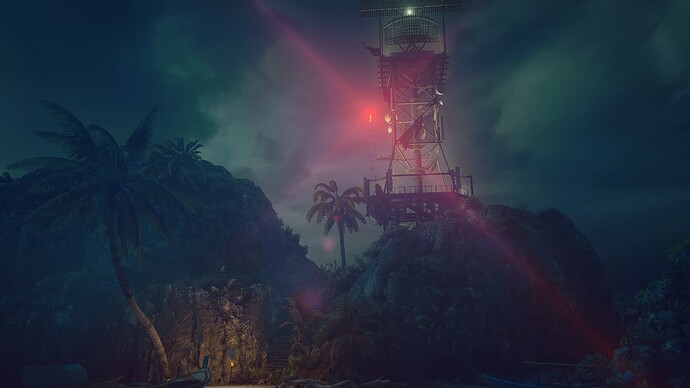 Fall Accident on Agent Smith !! How did you do it?
I tried to shoot his leg on water but the bullet kills him, tried with banana and all other stuffs … no luck. And it is not modded one (xbox

You made PC (GAME PASS)
It is simple and easy, I will put a video of how it works

Blimey! This old salt ne’er thought me bilge-sucking crew had the stones for mutiny. When I awoke from a clap of thunder, face down in the sands of Haven Island, the scurvy dogs had pilfered me ship!

Thar, I learnt they traded me plunder to the Haven landlubbers for new identities, but those lousy scallywags only put up enough coin for one face!

Whispers sailing on the ocean winds steered me to this here island where I’ll cleave those knaves to their briskets if it’s the last thing I do! 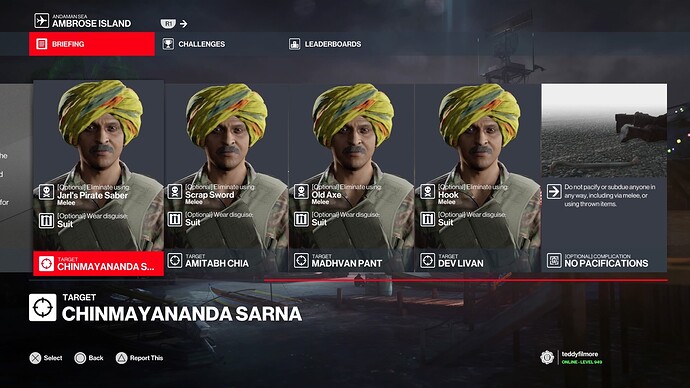 In this melee contract, the Buccaneer seeks vengeance on his mutinous crew for robbing and deserting him on Haven Island while he was black out drunk. Before setting sail, they commissioned Tyson Williams’ identity reconstruction services but skimped on the procedure and all ended up with the same face. They should be easy to hunt down.

All weapons can be found on the island, but the right load out will save a lot of time and hassle. No pacifications optional. 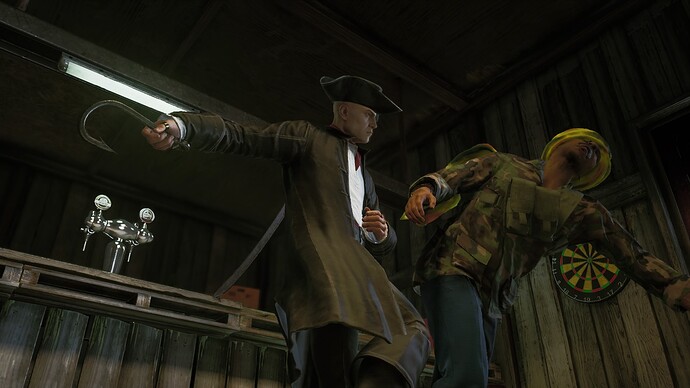 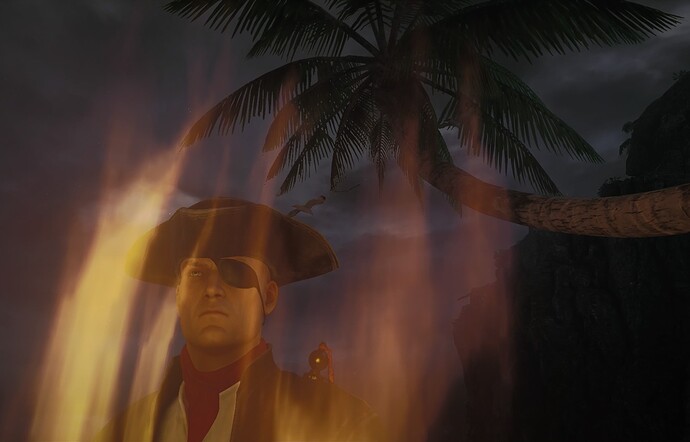 @mouhlito Hope your contract gets selected, personally I like smart non-modded contracts.

The second image is perfect. 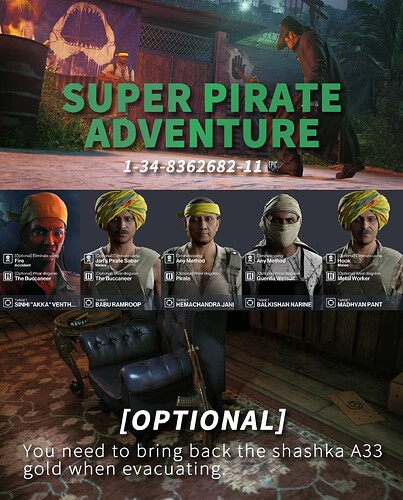 Briefing:
Welcome to Ambrose Island! It is famous for its very active pirates. Break through strongholds, defeat bosses and become the most powerful pirate here. Of course it would be cool if you could bring back some treasure.
[Optional] You need to bring back the shashka A33 gold when evacuating.

Brief Description:
The most powerful pirate is also leveled up from the rookie. Therefore, at different levels, the enemies faced are also different. Reasonable use of the opportunities to obtain disguise and the conveniences provided by the scene to eliminate the targets. 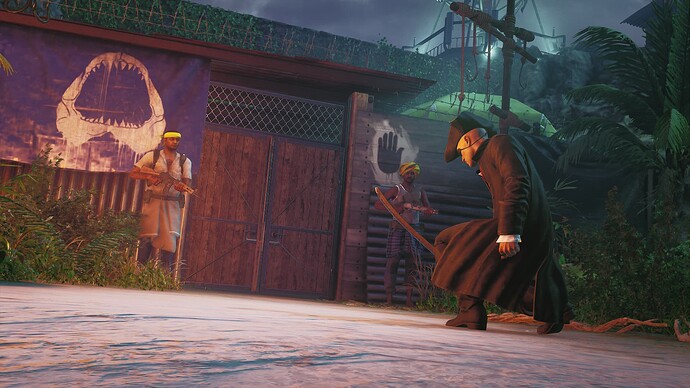 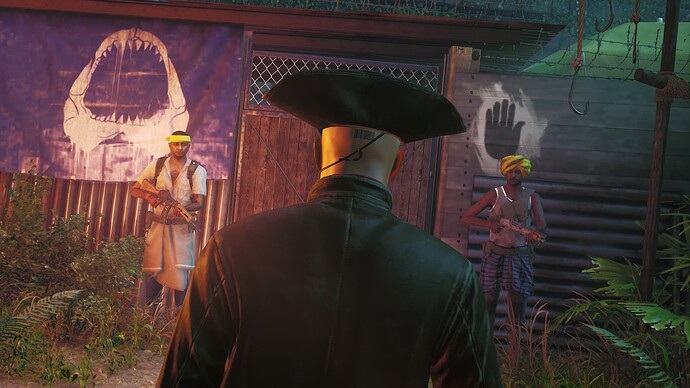 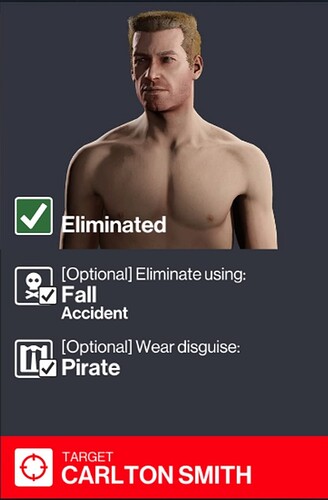 It’s not hard at all, it’s actually quite easy

Briefing:
A request from a resident of Ambrose Island who hates strangers.
They are from off the isaland, and they want us to get rid of them.
They have specified the assassination weapons to be use, and I want you to your best to follow their instructions.

Brief Description:
The non-English descriptions on the in-game screens are in the language of my country.
Targets are familiar faces from the HITMAN series.
Assassination methods are specified.
”Ornate Scimitar" and “Kukri Knife” are items that can be obtained by playing HITMAN 3 moderately.
The key to completing the game is the “Jail’s Pirate Saber”.
Please make full use of these items and try to clear the game in a suit in the shortest time possible.
You might enjoy it even more if you change into The Buccaneer suit! 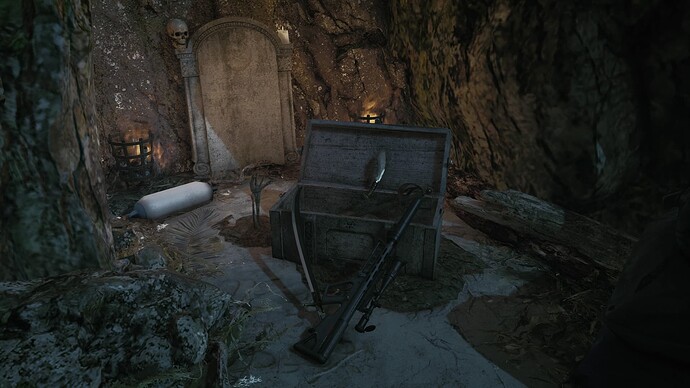 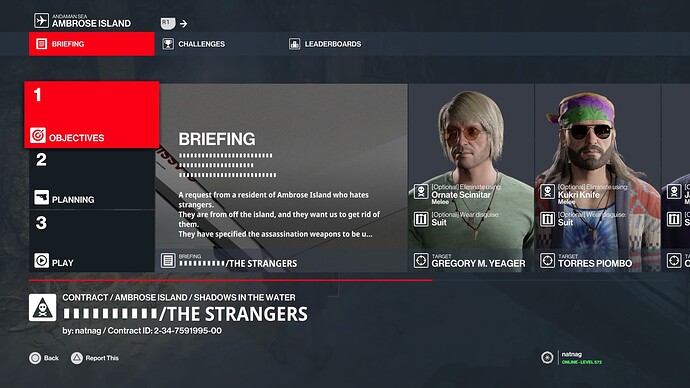 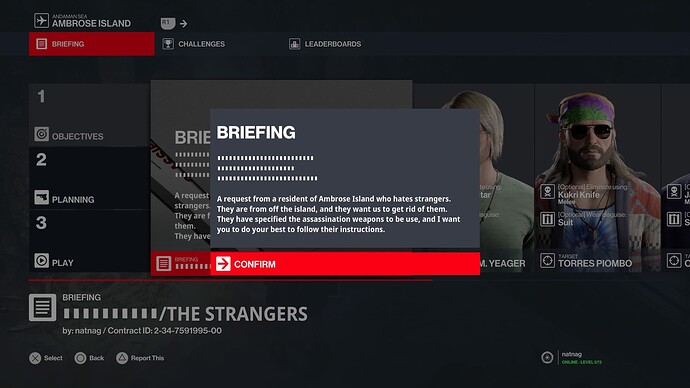 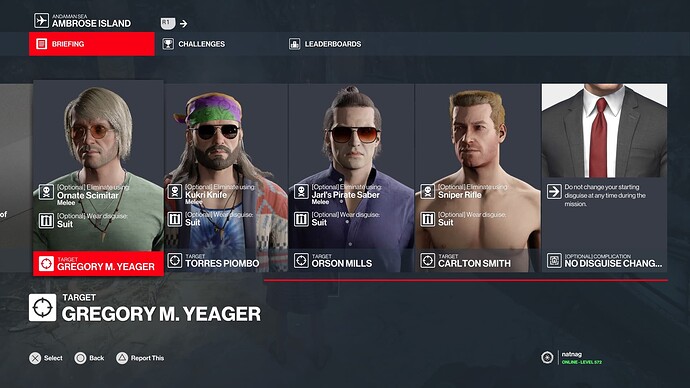 ID: 4-34-0446788-31
Platform: Switch
Submitter: EpicGamerer
Title: Noisy Neighbours
Briefing: Hello 47,
We here at the Paradise Travel Agency want only the best for our clients but we have recently received complaints from Gregory M. Yeager and Torres Piombo about their Ambrose Island deluxe camping package. They cannot sleep at night due to the Militia soldiers that have moved in right next to their camp, and are threatening to give us a 1 star review. Please kill off some Militia soldiers so the rest of them go home.
Brief description: Kill off several militia members located around the base as well as Orson Mills & Noel Crest in several different ways. Has potential for suit only, but maybe not silent assassin but you never know.
Location: Ambrose Island of course
Image suggestion: 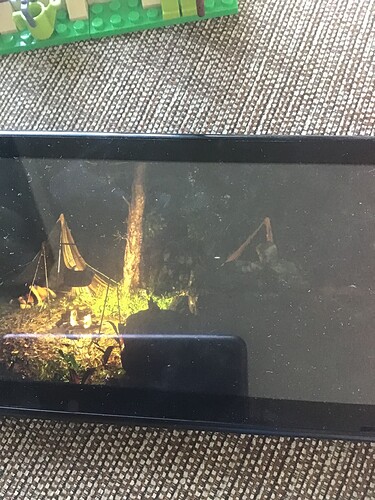 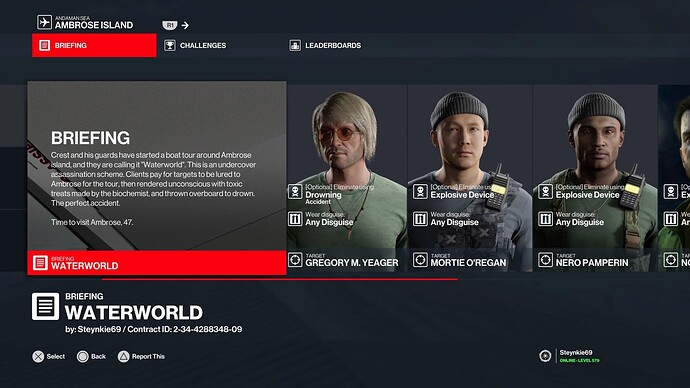 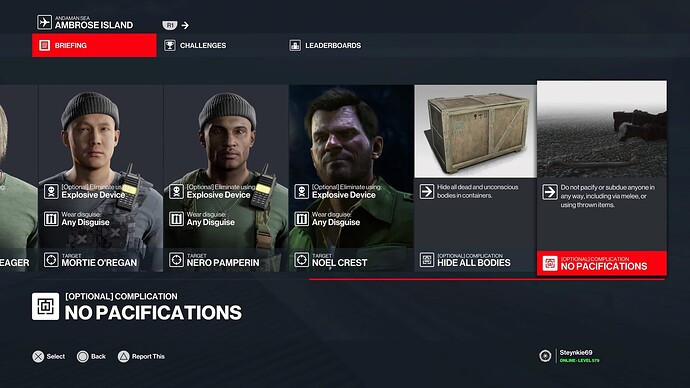 Briefing:
Crest and his guards have started a boat tour around Ambrose island, and they are calling it “Waterworld”. This is an undercover assassination scheme. Clients pay for targets to be lured to Ambrose for the tour, then rendered unconscious with toxic treats made by the biochemist, and thrown overboard to drown. The perfect accident.
Time to visit Ambrose, 47.

Description:
This is a simple fun contract. Drown the biochemist, and explode Crest and his two guards. No pacifications, and all bodies must be hidden in one big container, which is the sea. All items needed can be found on the island. No glitches were used, tested it several times and I got SA in 3:48 mins. 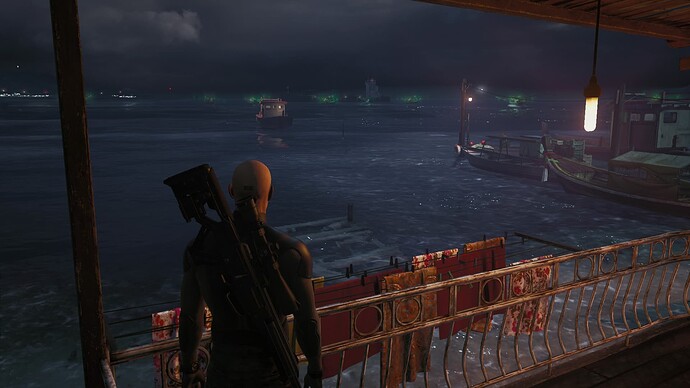 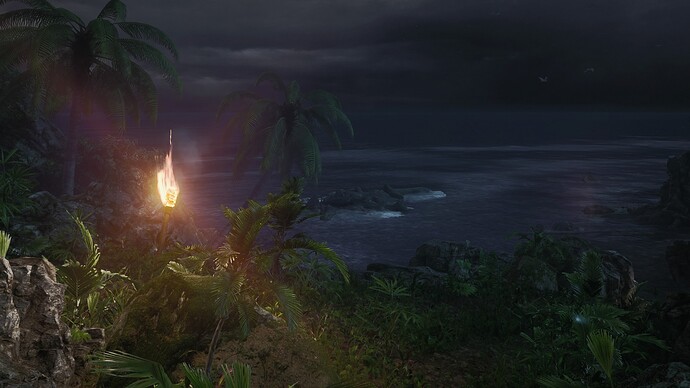 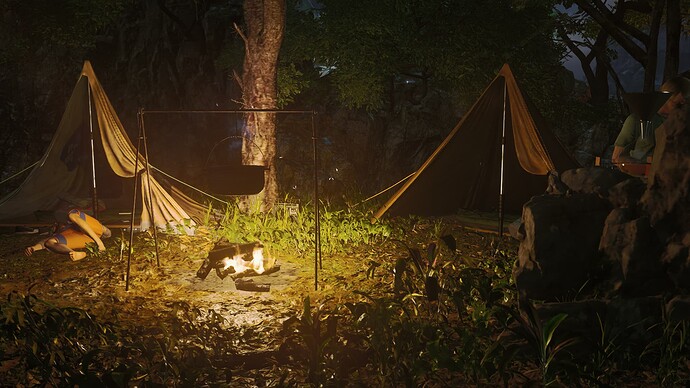 Contract Title: A Visit to Ambrose

Briefing: Doreen Ambrose: to all appearances she seems like any other front desk cashier at the New York branch of Milton-Fitzpatrick. And that would essentially be true. But she declined our client’s mortgage application and was quire rude about it. So: long story short, she must die. Preferably in the most theatrical circumstances possible.

“What’s in a name? That which we call Ambrose
By any other name would smell just as sweet”

Brief Description: You asked for inventive takes on the theme. And the bank teller at the front desk in New York is called Doreen Ambrose. I’ve tried to be kind with the conditions, but if you want a really Dark Souls level of difficulty I also made Contract ID: 1-24-0514222-82

@Login @Charlie_Farmer
Yep THAT SASO guy already did it.