Our client is a representative of the Malaysian government who is looking to combat their pirate problem by provoking a conflict between Akka the Pirate Queen and Noel Crest’s splinter militia.

The client wants this to look like a betrayal 47, therefore you must kill the targets in a method consistent with the other factions M.O, and it must look like a cover up.

Brief Description:
This is a story focused contract based on solving the pirate issue on Ambrose Island indirectly (rather than directly, like in the story mission). The title Unwanted Guests comes from the fact that 47 is going to cause an irreparable rift between Crest and Akka by killing each others closest Allys making the Militia unwanted guests on the island. The Visit Ambrose theme is covered not only by 47 visiting the island to complete the mission but more importantly its about Crest and Orson visiting the island and coming to regret it.

The equipment required for the optional kill and outfit requirements are all available on the map allowing you to complete this mission with a basic loadout from the default start. Saying that, I would recommend the Seeker Pistol or similar.

The story of this mission revolves around setting up the militia and pirates, therefore the no pacifications and hidden bodies requirement was added to fit this theme. Its meant to look like one faction killed a member of the other faction and tried to cover it up by hiding the body.

This is my first submission to featured contracts and I hope ye enjoy it. 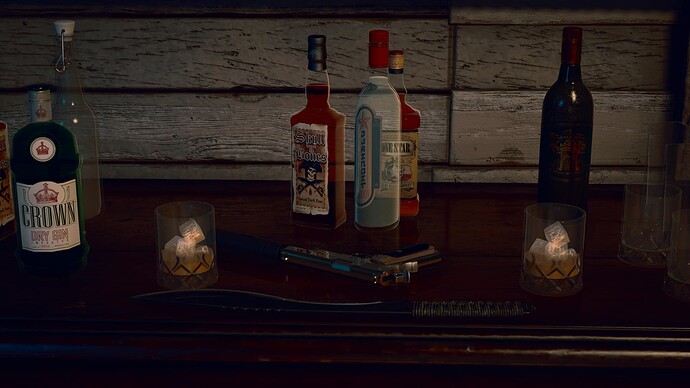 I chose this image as it is the desk from the room where Akka and Crest meet with the Weapons of choice between the two glasses.

First post here so the probability my contract is selected is quite low, but I’ll try anyway

Briefing: According to the ICA (International Codfishers Association), there are people on Ambrose Island illegally fishing endangered sea life with heavy duty explosives. Those people must not be allowed to continue their illegal operations. You will find plenty of explosive devices on Ambrose Island - you can even make more with raw materials if needed - and they will work just as well on shady fishermen as they work on what they’re fishing.

Brief Description: 5 targets to kill with explosive devices, no pacifications, no bodies found (both complications optional). Since you can only bring 3 explosives in your loadout and the targets are far from each other, you need to get 2 more explosives from the map. I crafted them since it’s one of Ambrose’s most interesting features, but there are probably quite a lot of other ways to get them. Initially I planned to require suit kills but it was far too restrictive and just added a lot of running around for no good reason, so I switched to any disguise.

Suggested Picture (feel free to crop the top as my monitor isn’t one of those fancy widescreen things): 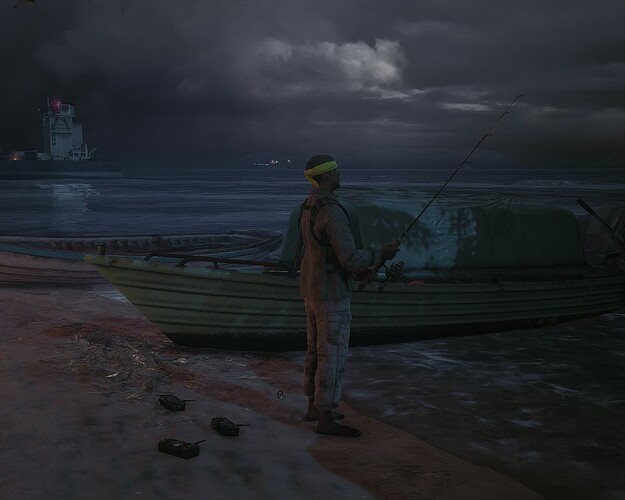 Contract ID:1-34-041214534
Platform: PC (Epic)
Subitter name: Azrael73
Contract title: Crazy Pirate
Briefing: Arrrrrrr that last bottle of rum got me thinking crazy thoughts. Time to act on them by killing random folk. That will calm me nerves before i hoist anchor and get off this crappy island.
Brief description: Just a crazy drunken pirate on a killing spree.
Location: Ambrose Island

Contract ID: 1-34-7437400-34
Platform: PC (Epic)
Submitter name: Azrael73
Contract Title: Deadly sleep
Briefing: You wouldn’t know it by looking at them but they are all ex assassins responsible for stealing many of your kills. While its not professional to hold such a grudge the least you can do is kill them like a pro, quietly in their sleep. Do it ninja style for a bonus.
Brief Description: Stealthy ninja kills
Location: Ambrose Island

Hi Fellow 47s of the World!

Briefing: A contract has been issued by Farah, who uncovered a sinister human trafficking ring operating right under her nose. The Liao Brothers are the ringleaders. Their team includes a waitress and a bouncer at Farah’s, who drug their victims at the outdoor bar. A military liaison then spirits the unlucky barflies to their horrific fate. Put an end to it.

Brief Description: Players have lots of flexibility in terms of timing and execution here, but optional conditions including weapon and disguise choices add some structure to keep things interesting, and ensure the player almost certainly will have to wander into restricted areas…or find yet another disguise to make their way past the guards. Plus, I love the idea of Farah taking care of business, and taking out the whole operation in one fell swoop…or rather, having Agent 47 do that on her behalf.

Image Idea: IDK, maybe Farah giving a cook the stink eye, or 47 hiding outside of the Liao bros hut with the razor in hand?

Contract ID: 3-34-4616111-19
Platform: Xbox - PC (Gamepass for PC)
Submitter name: Wynn
Contract Title: Hook, Line and Sinker
Briefing: Utilize the hooks, fishing lines and poisons scattered around the map or bring your own. Either way they’ll fall for it Hook, Line and Sinker.
Brief Description: Eliminate 3 targets with methods based of the phrase. The targets are relatively close to the way your meant to take them out (pirate next to hook, cook next to fishing line, kinda, and militia member close to toilet).
Location: Ambrose Island
Contract Image 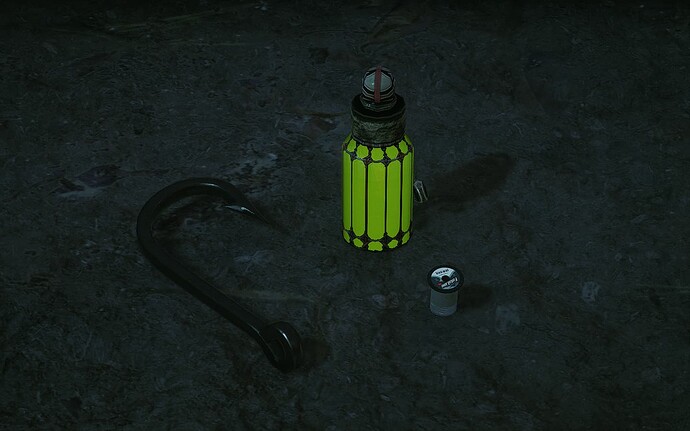 Briefing:
After a simple visit to this strange island, we discovered that there are strange things and full of secrets, and you can kill at any moment with things you do not imagine how strange, and you can use any tool to kill so you have to remove these targets in a new way. Good luck 47
Location:Ambrose Island
# BANANA THROWN WEAPON
https://youtu.be/LRTbsvVlojE 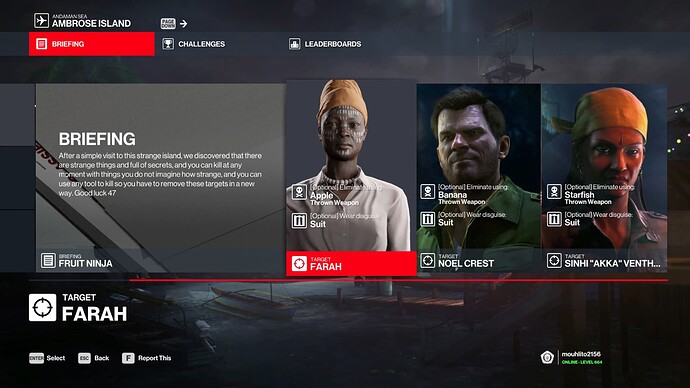 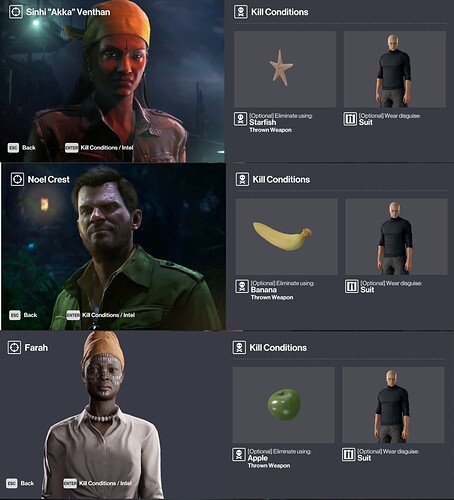 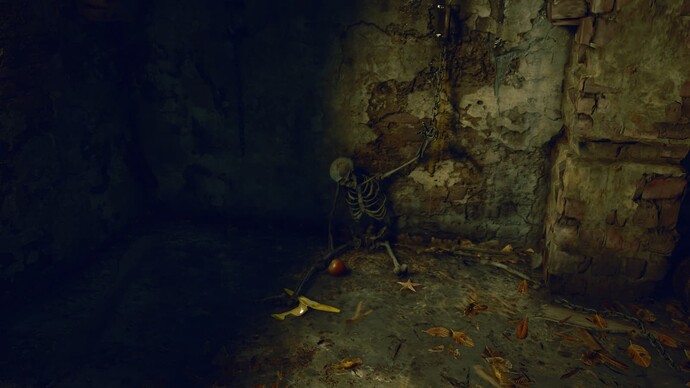 I don’t know, man. Your vibes really took a turn. You’re the one who invited me to visit Ambrose, but now you’re saying I can’t hang out?

I was digging Gregory’s research stash. Becoming one with the jungle. That shrine was, like, talking to me. Our conversation wasn’t over.

I was your man, man, but I don’t like being, like… rushed. Now, I’m gonna take your submarine and some more of that far out brew for another deep dive. 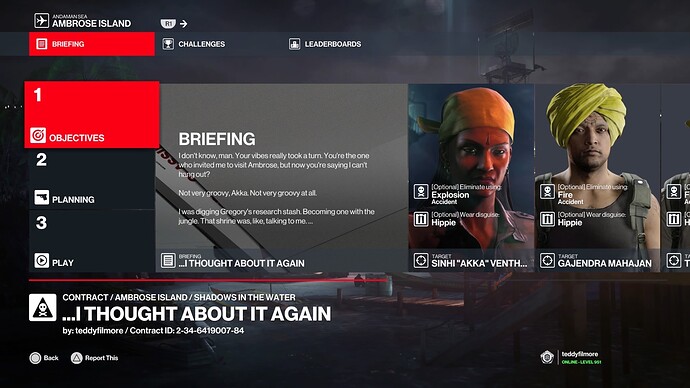 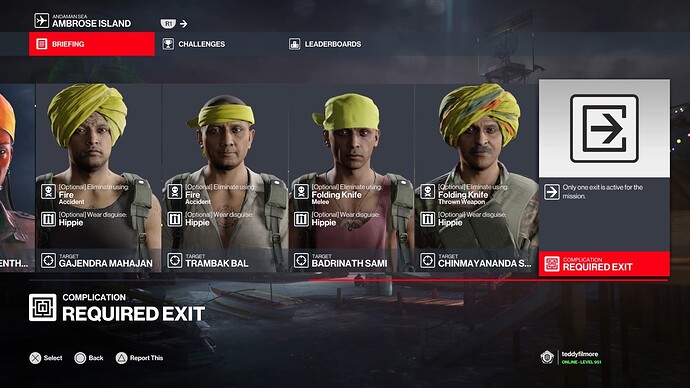 A sister contract to the ‘…I Thought About It’ challenge. This is the first time I’ve required an exit, but it fit with the concept. Hopefully, the mention of the submarine in the briefing dispels any confusion. 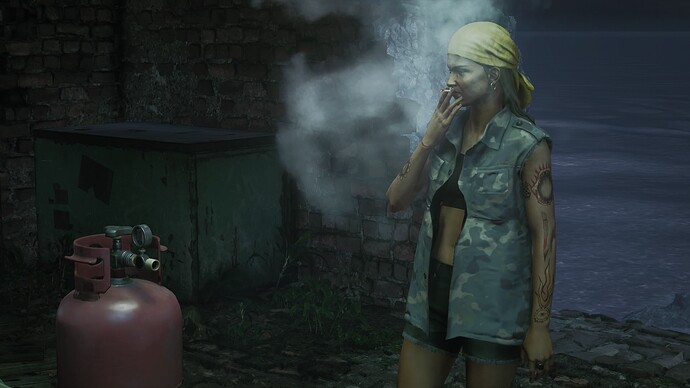 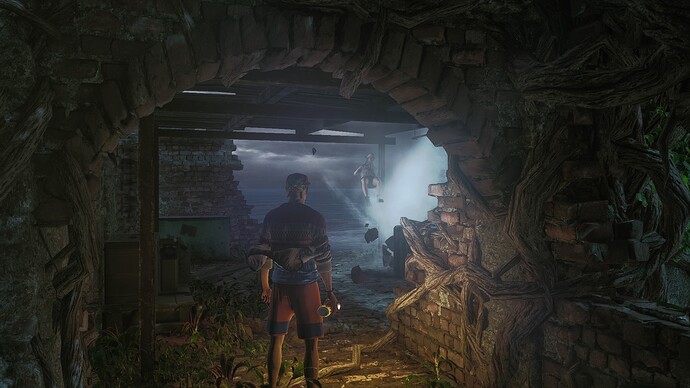 Briefing: Hello there 47, it seems yer ex-crew has been spotted at Haven Island. These scurvy dogs done you dirty by kicking you out. Let yer revenge loose on these scum.

Briefing: Aye 47, these lazy staff need to be taught a lesson. Drown them all. Good luck matey.

Briefing:
47, why are you in Haven Island and not Ambrose Island?

Anyway, since you are already there, eliminate Liam Young, Daniele “Chaos Agent” Carco and Christie Howards. All 3 are part of Nolan’s crew of thieves.

Also, exfiltrate using the plane and go to Ambrose Island.

Brief Description: Agent 47 landed on the wrong island and while he’s there he kills 3 targets that are part of nolan’s crew. After that he takes the plane and goes to “visit” Ambrose Island. 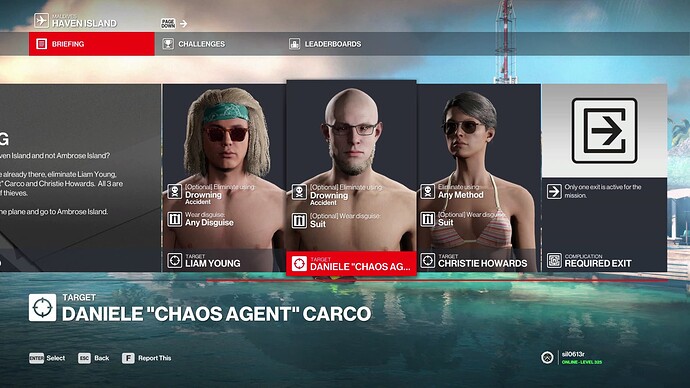 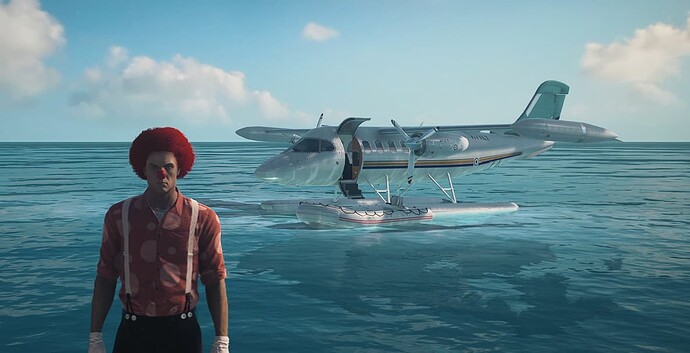 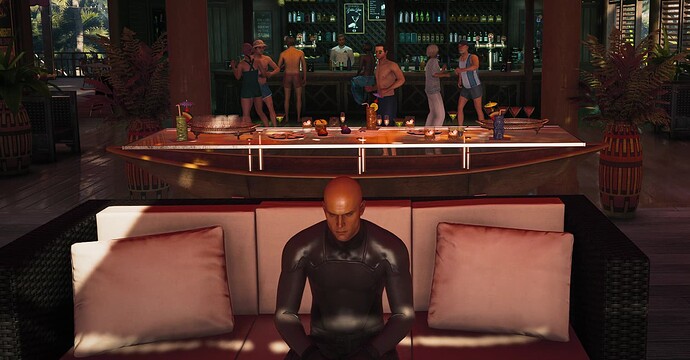 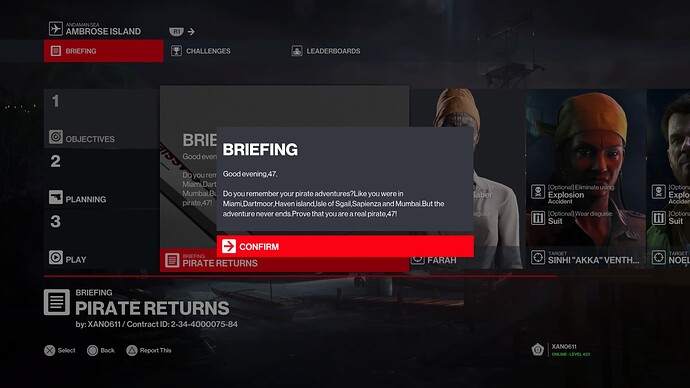 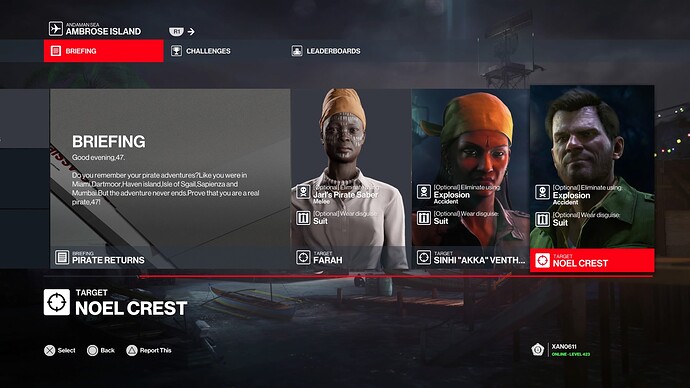 HITMAN 3_202208292333511920×1080 263 KB
Brief description:
As you understand, this is a reference to the featured contracts “Bootleg & Buccaneers”.It is necessary to eliminate Farah with the help of Jarl’s sword and 2 main targets with the help of a cannon.
Location:Ambrose Island
Contract Image: 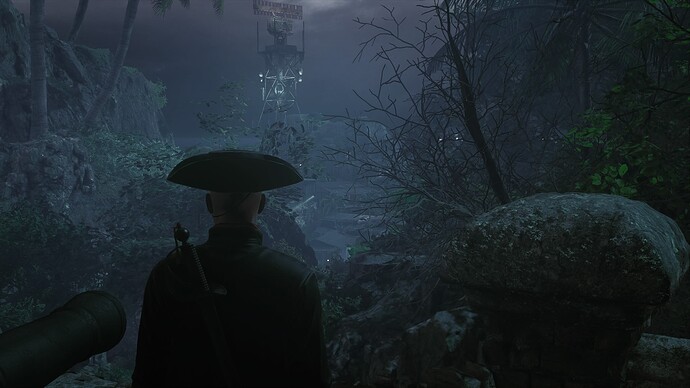 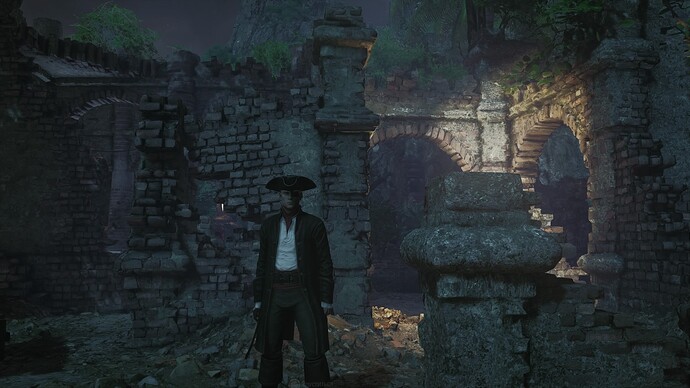 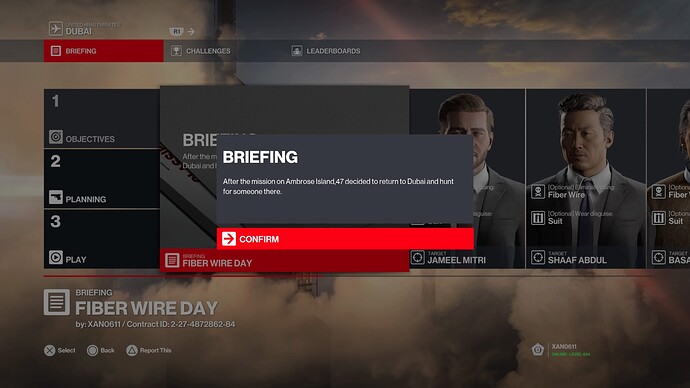 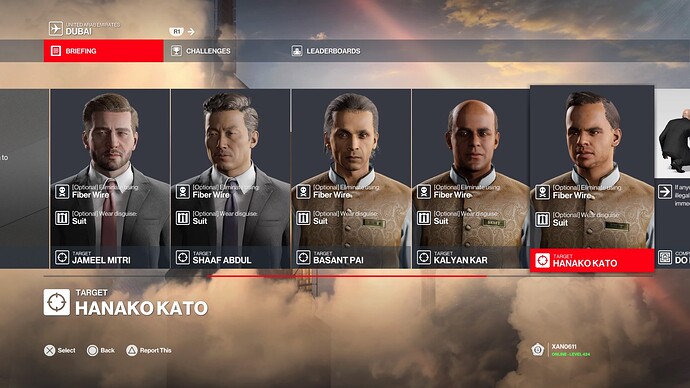 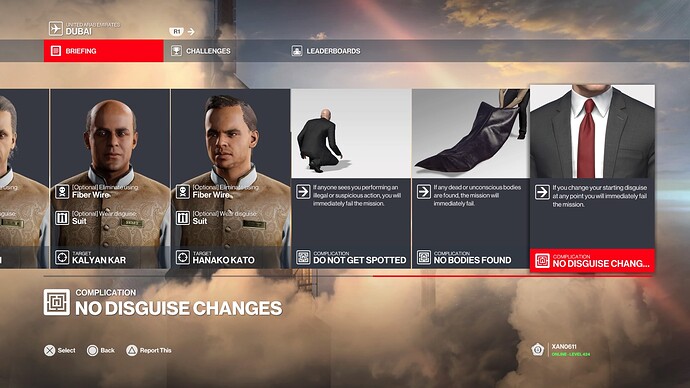 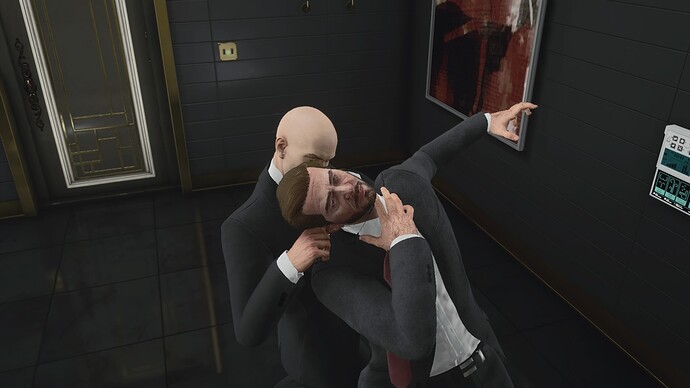 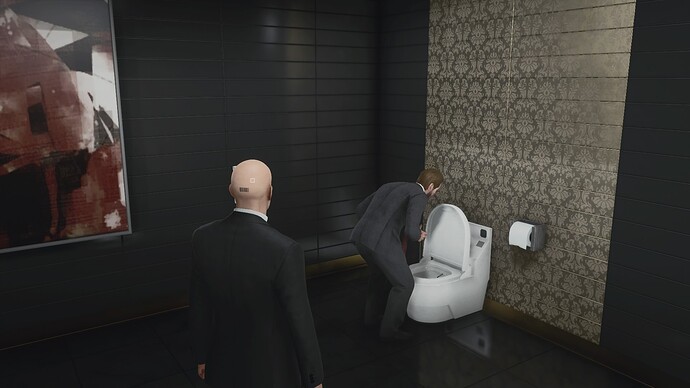 Briefing: Good evening, 47. Our client is a Russian arms dealer. One of his cargo ships was recently hijacked off the coast of Ambrose Island- a traitor in his crew tipped off the pirates. We are to eliminate the traitor, Rufus Ehrhart, any hostages from the crew, and the militia leader Orson Mills to ensure our client’s organisation remains secure. Our client is a believer in the old ways, and wants this done according to the rule of Omerta. Good luck, 47.

Brief Description: This contract showcases the two main factions on the island: the pirates and the militia. Players will need to sneak into the heart of both factions bases to eliminate targets using a fiber wire. This can be challenging if players are trying to remain undetected, and also showcases the many routes and hiding spots that can be used to get around the island.

Featured Contract Image suggestion: 47 on the island with a fiber wire held in black gloves, sneaking up behind a target. The fiber wire is the focus in the foreground.

The remaining 2 contracts I will post in the evening.

Will this date be changed, considering the updated roadmap?

Briefing:
Ambrose’s cuisine should be adventurous - the island is abundant with wild herbs, succulent fruits, and delicious fish. However, the chefs on the island are limiting this potential - always taking smoke breaks, late for work, watching TV on the job, and just a simple lack of passion or innovation.

Farah has asked us to retire her lazy chefs and teach the rest a lesson to bring a new lease of life to the island’s food. Perhaps then it won’t just be pirates tasting what the island has to offer. 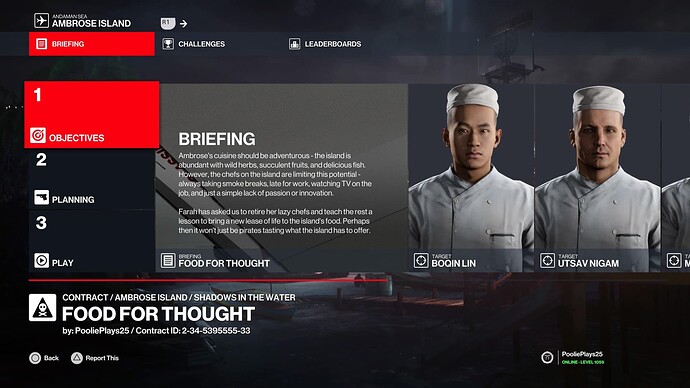 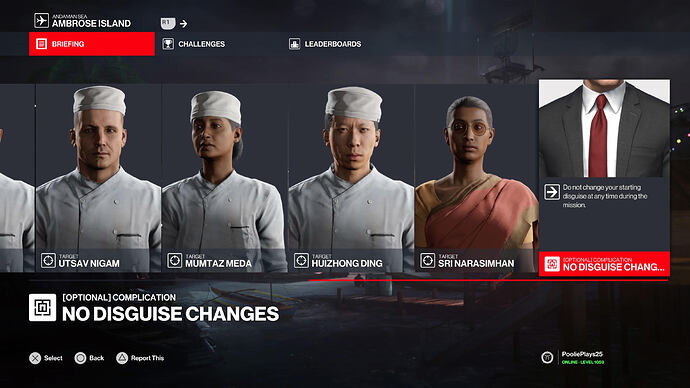 Brief Description:
Five targets, all lazy chefs who are smoking, walking around, sleeping, or chilling out watching TV. Some of them are isolated, however the real challenge is working out how to kill the chefs in the Central Social Hub. There are no restrictions allowing for a variety of routes, however there is one complication where you cannot change your starting disguise. I love speedrunning and so this contract is possible to be done quickly, and also possible to be done Silent Assassin. Hope everyone enjoys! 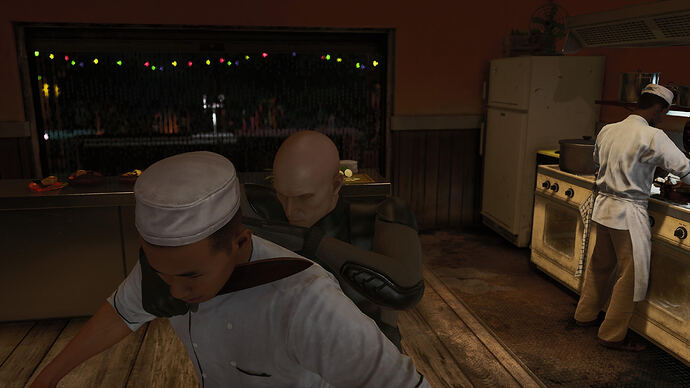 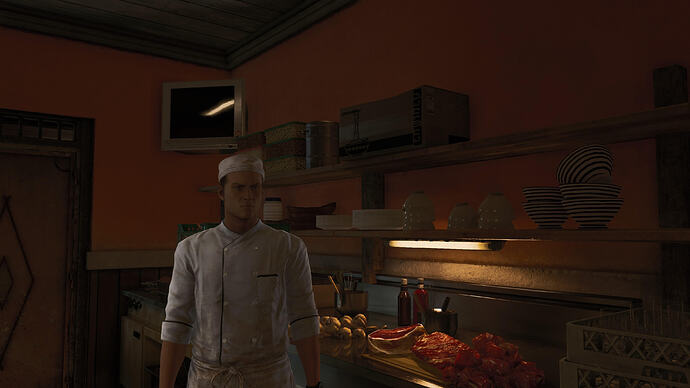 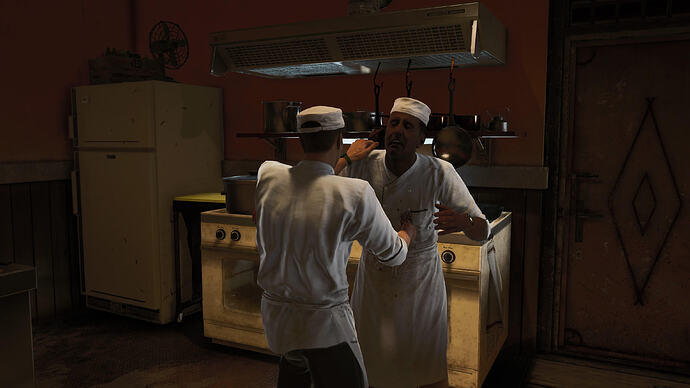 Briefing:
ICA has an active contract on Akka, but we don’t know her location yet. The only intel is that she is now in Wazir Kale’s old port.
With Kale gone, the only way is to interrogate her address from her pirates disguised in the crowd. Good luck 47, I shall leave you to prepare.

Brief Description:
As the opening cinematic of Ambrose Island mentions some information on Wazir Kale’s old port, this contract takes place just before that briefing. Here there is no information on Akka’s location but Diana says ICA has a contract on her.
There are four randomly disguised npc in the crowded streets, with same name and same route. These are some of people you scan while searching for Wazir Kale. There is no complication and you can use any method/disguise on them. The thugs will surely break your patience and you might get lost in the crowd sometimes. Some ways are disguise as metal worker to avoid thugs, barber’s clean shave, food vendor to poison, and a lot of sabotage waiting. Choose your way wisely. 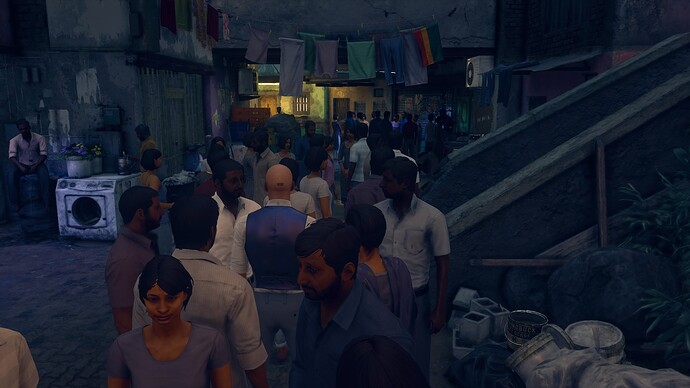