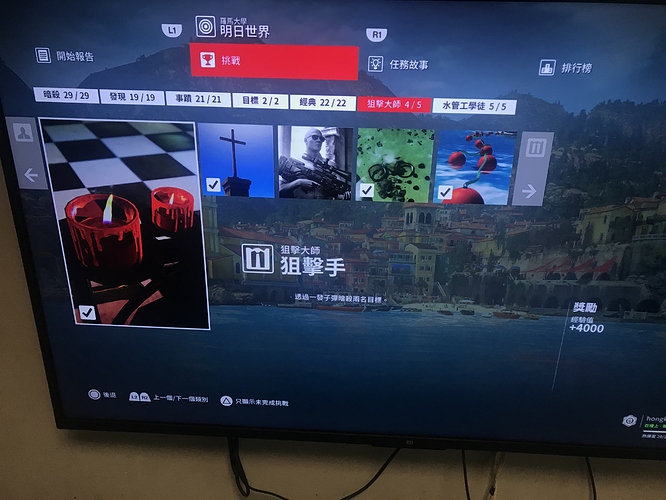 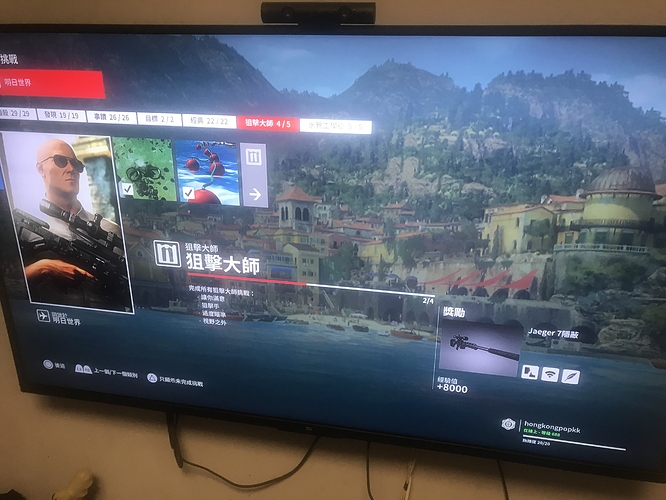 I already posted the following as a separate Thread in “Hitman Technical support” but because I’m a bit confused where this should be posted, I play safe and post it again. Also because thsi makes the Game inplayable in my Style for me.

I normally do this thing, where I knock out all the NPC’s in a, for me, relevant Area. In this case, the whole villa, the ruins, the lab (untouched at this point), the kitchen (Besides the chef), the mortuary, and some other little places. So in the end I can save, reload, and work through all the challenges and different ways to kill the targets. I did the same in Paris. Now comes the problem: I’m up on the last floor (Where De Santis is all the time) and knocked out two guards outside this little security room. I put them in a box and saved. After that, I “took care” of the two workers and one of her guards and hid them too. Again I saved, but this time on a different slot. Only that when I tried loading the said save the game tries to load, but when the loading bar got to the end, the game crashed. I was curious, so I loaded the other save. To my surprise, this worked. I did some more testing but it kept happening. I tried changing my setting, restarting my pc and I let Steam check for errors.

Little Update: I decided to investigate a little more. Because I stood right outside a window to the security room with the “Cam-Recorder” or whatever, I took my Pistol out and shot it. All evidence is gone, and I saved instantly. When I tried loading it, it didn’t work. Even though I only turned left and shot that thing. So it has to be something else, than these three NPCs. It also crashes when I simply load the working save, do nothing, save it on a completely different slot, and try to load that save. 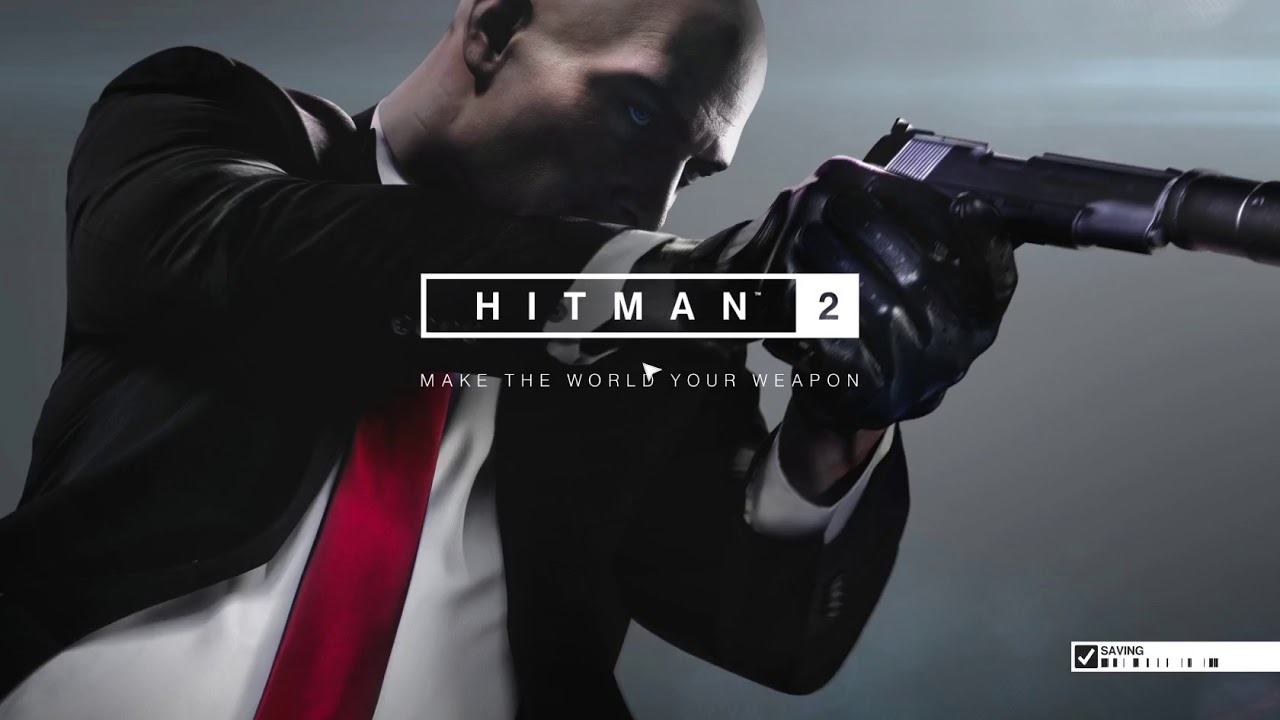 I have some kind of Technical issues with Hitman 2 on Steam. Today I got a new update for Hitman 2. The Update is 414.4 KB large and I notice no big chance in the game, I thought about a bug fix or something like this, but than my Antivirus-Program alarmed. One infected file. The file name is: SteamLibrary\steamapps\common\HITMAN2\Launcher.exe and the Object that infected the datai is named UDS:Trojan.Win32.Fsysna. I use as Antivirus-Program Kaspersky and they isolated the object and deleted it. One or two searches later Kaspersky told me everything is fine. This is all a kind of a issue on his own, but my real issue where Kaspersky can not help me is the following. Everytime when I try to start Hitman 2 the “update” wants to get installed and then Kaspersky comes again and said there is an infected object on your PC, so they delete it. So as long as the update wants to get installed I can not play the game. Hitman is the only game I play and waiting 6 months to play again Hitman 2018 content would not be soooo great.

My english is not that good and I hope you can understand my problem, thanks for any help

(Kind of fixed because of another thread)

Temporary solution for that is to add HITMAN folder to exclusions list and make HITMAN\Launcher.exe file a trusted program. Works for me Before doing that disable KAS and re-download Launcher.exe and do all described above. Then you can load up KAS again

Playing on PC via Steam, Windows 7
Miami challenge Explosive Liasons is not working. When he hits the detonator, it causes a puff of smoke and he says something about “amateurs” and walks off. I have tried running it all the way through to see if it is due to loading from a save, but it never works regardless of what I do. Is there a fix?

You must be dressed as a Kowoon mechanic and call Knox by.a payphone first.
Are you doing all that?

I’m not sure, but maybe it’s because Windows 7. As far as I know, W7 doesn’t have DX12, so you can’t use it to play a game. Unfortunately the state of game is not so good, so that any small detail could matter. Try to do this mission on Windows 10 with DX12 applied. You can set it in game launcher settings.
Who lnows, maybe it will work

Hi, got a problem… I’m playing Hitman 2 and Patient Zero from the first game. I’ve unlocked new mission planning items by playing the levels, but when I go to the mission planning screen, they are not shown. Anyone encountered this?

Hello Colin. Could you describe more in detail about what you’ve encountered? What mission are you currently playing? And what item is missing from your menu?

I’m playing Patient Zero add-on missions from Hitman in Hitman 2 for Windows. You know when you unlock new agency pickup locations, weapons, or starting locations as you play the level? Normally the new items will be shown in the mission planning screen before you start. However, my unlocked items are not showing up. As you can see from the screenshot, only the first starting location is ever available and I’ve definitely unlocked others.

This is for Patient Zero: The Author mission in Sapienza. I’ve done most of the challenges but can still only start from here.

Missions like The Author from The Patient Zero campaign, or The Icon as one of the Summer Bonus Mission, only come with 1 starting location and 1 agency pickup location, while there are a few exceptions like Holiday Hoarders do have more. Anyway, don’t you worry, you didn’t lose any unlocked locations. They are available in the main missions.

Oh I see, thanks for the info!

hello
I play on the Xbox One S. I am experiencing an issue where every time I load into the game, the sound cuts off every few seconds, then comes on. this sound is only from the game. I also cannot change disguises, every time I attempt to, the screen just freezes and I can not move. also, I cannot load a previous saved slot, as when I press load, it will not work and give an error which returns me back to the menu where it says Im offline. please get back to me soon as I love the game so much and am quite sad that I am not able to play it
thanks

Then check up your hard drive. It might be full or corrupted.
Some say the full clean up of the disk might help in situations like this.

If nothing above helps in your situation, then it most likely your hard drive is corrupted.
You need to buy a new one

Have a strange issue, not sure if I can be helped here…I found that I have HM2 in my Xbox game collection as listed on Xbox.com…it does NOT show in game purchases, nor do the DLC, I have Paris, Bangladesh and a few others. I can play with a silver profile or my own ( Gold) and also offline, so Xbox servers don’t know if I have gold or not, so I assume I have a licence…but have no idea how I came to , apparently, own this game.

I would like to play all the DLC but can’t see how to download the rest
Prefer free obviously maybe I will have to delete it all and buy HM2 gold which I believe has everything… then will get HM definitive edition which then cover everything I think.

Responding to guy who told me that only Windows 10 works “to play a game”: Cool. I’ll just magically get Windows 10 and wipe half the stuff on my laptop for the sake of Hitman 2 when everything else in the game works - this is the only challenge left on the entirety of Hitman 2 for me. I have 100% on every Hitman 2 map except Miami and every challenge except this one.

Between my bug comment and this one, i went and 100%'d every Hitman 2 map (I was already at least level 20 in all maps. Explosive Liasons is the only challenge that does not work because he hits the detonator and all that happens is a little puff of smoke.

While upgrading/installing new OS, you don’t have to wipe one single thing.
And I didn’t tell you that Windows 10 is the only system to play the game on.
Windows 10 has a support of a new DirectX, which Windows 7 doesn’t have. That’s the only thing. Read carefully

Thanks for responding misterkiller. I am concerned that I will lose some of my (non gaming-related data) if I upgrade on my current laptop. I get the DirectX thing. Were you saying that a person cannot use DirectX 12 on Windows 7? If so, it was a clunky way of putting it, not due to my lack of reading, and I think the “read carefully” comment is rude. I was rude too in my sarcasm, but I get it. I just think this support approach (having one forum for everything and not really helping people or admitting that a bug will not be fixed or that anyone in support will try to replicate it) is ineffective. I could upgrade to Windows 10, but why does EVERYTHING ELSE work for me? How was I able to 100% Hitman 2016 and every other Hitman 2 map? I get that Hitman 2 is more recent and Windows 10 was not the main thing when Hitman 2016 came out, but Hitman 2 uses the same infrastructure, right? I wouldn’t claim that someone doesn’t have to “wipe one single thing” at least without some limiting language, because that can be interpreted as a straight-up misrepresentation in several ways. I am triggered by you accusing me of not reading carefully - I am a careful reader. I was making fun of your entirely flippant, unhelpful, sloppy, and terse reply to my honest request for help.

I can’t go online. The game does not connect to the server. I can’t even smuggle items just because of this problem. I’m playing on Steam.

When i try to go online it says “Your connection to the HITMAN 2 server has been lost. Failed to fetch version information for the HITMAN 2 server.” I already tried to deactive firewall and veryfing game files from steam. Can’t find any solutions. Any ideas? Thank you. 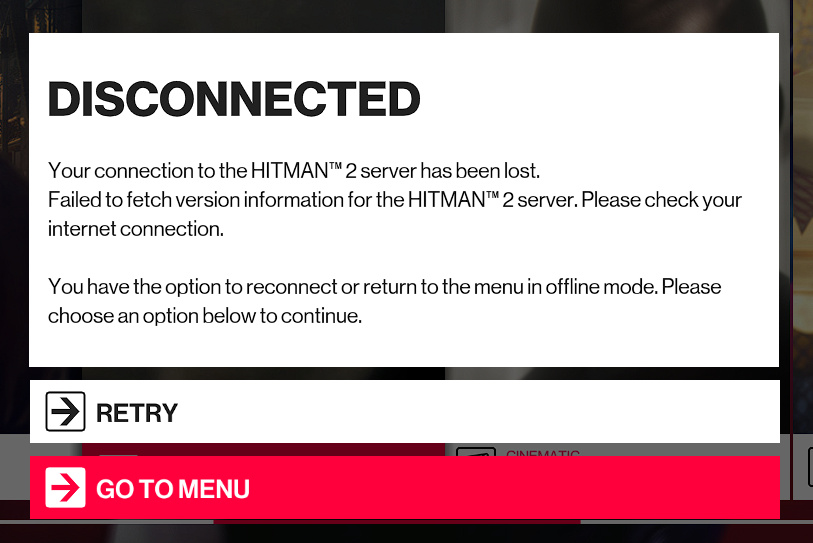