It’s time to dust off your engines and get creative once again - because we need you! I here by open the Featured Contracts thread for January 2020.

As always however you interpret that to create your missions, is all up to you.

If you’re up the challenge, submit your contracts using this format: 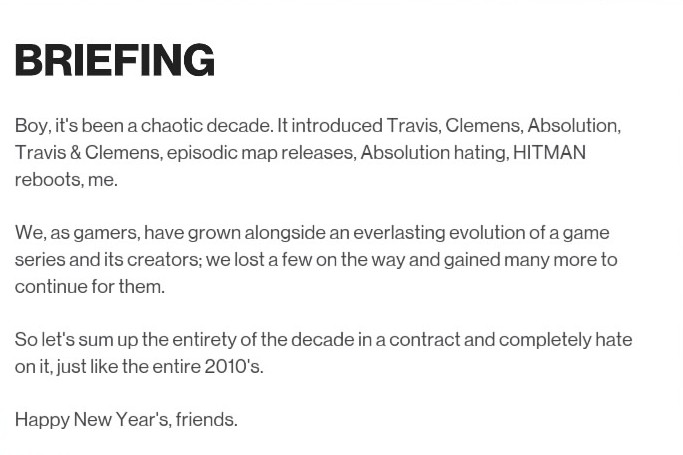 Why the contract should be featured:
Starting off this year would be awesome, I joined back on January 17 this year (both the full game and the forum) and honestly, I think this game is the one I haven’t gone a day without playing (well, y’know, not while I’m on holiday though).

Throughout the year, I’ve surprised myself in the techniques I’ve learned myself and the techniques others have either taught or shown me. I’ve mostly enjoyed every minute of this game and can’t wait for the next year with all its limited content.

Besides, in regards to our friendly competition, @Urben’s going down.

I’m killing him off in reference to me beating him.

Got a few submissions

Name of Contract: The Mendez Retirement

Ted Mendez has one day left before retirement and one last mission to finish. However, Ted seems to be putting off his final task. Perhaps he’s not ready to leave?

Well if Ted won’t you’ll have to do it for him! Take out the Kronstadt moles who have been leaking classified information, so Ted can finally get his pension.

You have to kill several Kronstadt moles dressed as Ted Mendez. 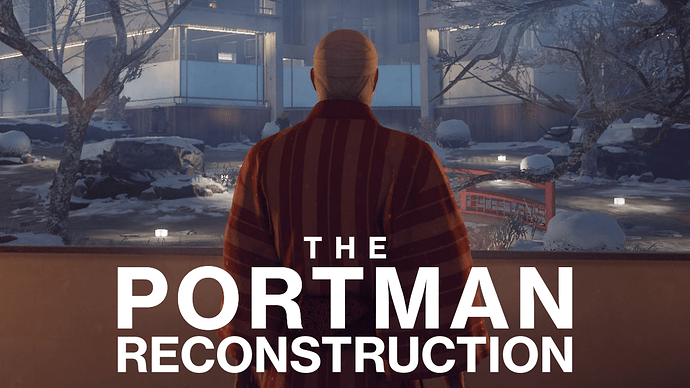 Name of Contract : The Portman Reconstruction

Jason Portman just went into hospital to get reconstructive surgery so he can look like his idol. They didn’t exactly do the best job though, so let’s sweep this whole mess away.

They accidentally messed up his face, let’s mess up theirs!

Get rid of everyone involved in Portman’s awful face

Why the contract should be featured :

Okay at @KevinRudd’s request I’ll include this 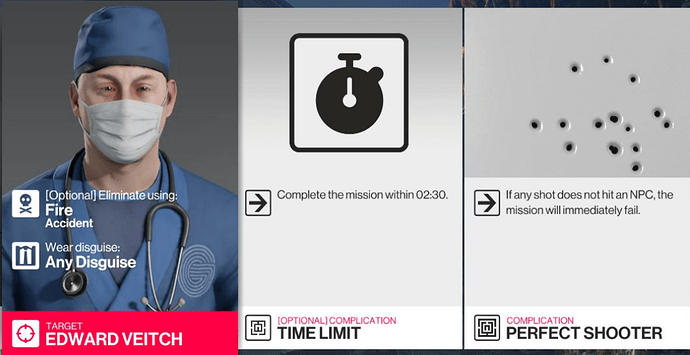 So this contract has one simple goal, burn the doctor as quickly as possible. However, you have to take into account 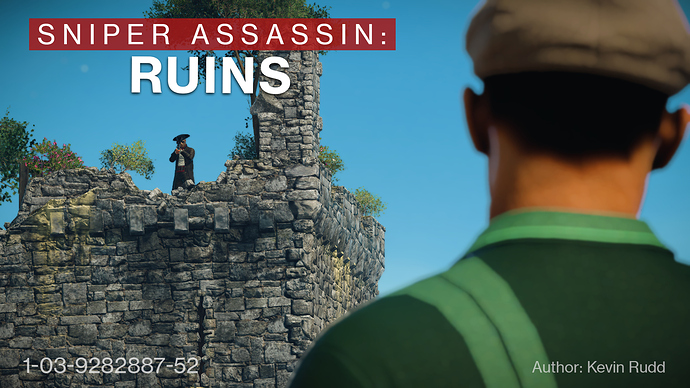 Ruins1920×1080 801 KB
Name of Contract Sniper Assassin: Ruins
Contract ID 1-03-9282887-52
Platform PC
Location Sapienza - World of Tomorrow
Description/Briefing Head to the top of the ruins and kill 5 targets across the town + Mansion grounds while wearing your suit (It’s expected you’ll use sniper rifle or sniper-based accidents), then exit via the speedboat at ruins.
Why the contract should be featured

EDIT: For those on console who want to try -

Name of Contract: Close The Damn Window
Contract ID: 1-10-0471625-95
Platform: PC
Location: Hokkaido
Description/Briefing:
Brrr! Someone left the window open in the bathroom, and now all the warm air is getting out! We’ve got two possible culprits - a man and a woman. There’s also a third man who definitely didn’t do it, but he left a floater in the pool so he’s gotta go too.

Why the contract should be featured:
You ever get a really nasty cold breeze in the winter, when you’re trying to stay warm in your house? Make people freeze by shoving them into an ice-cold pool of water. Or shove them off something else, I don’t care. 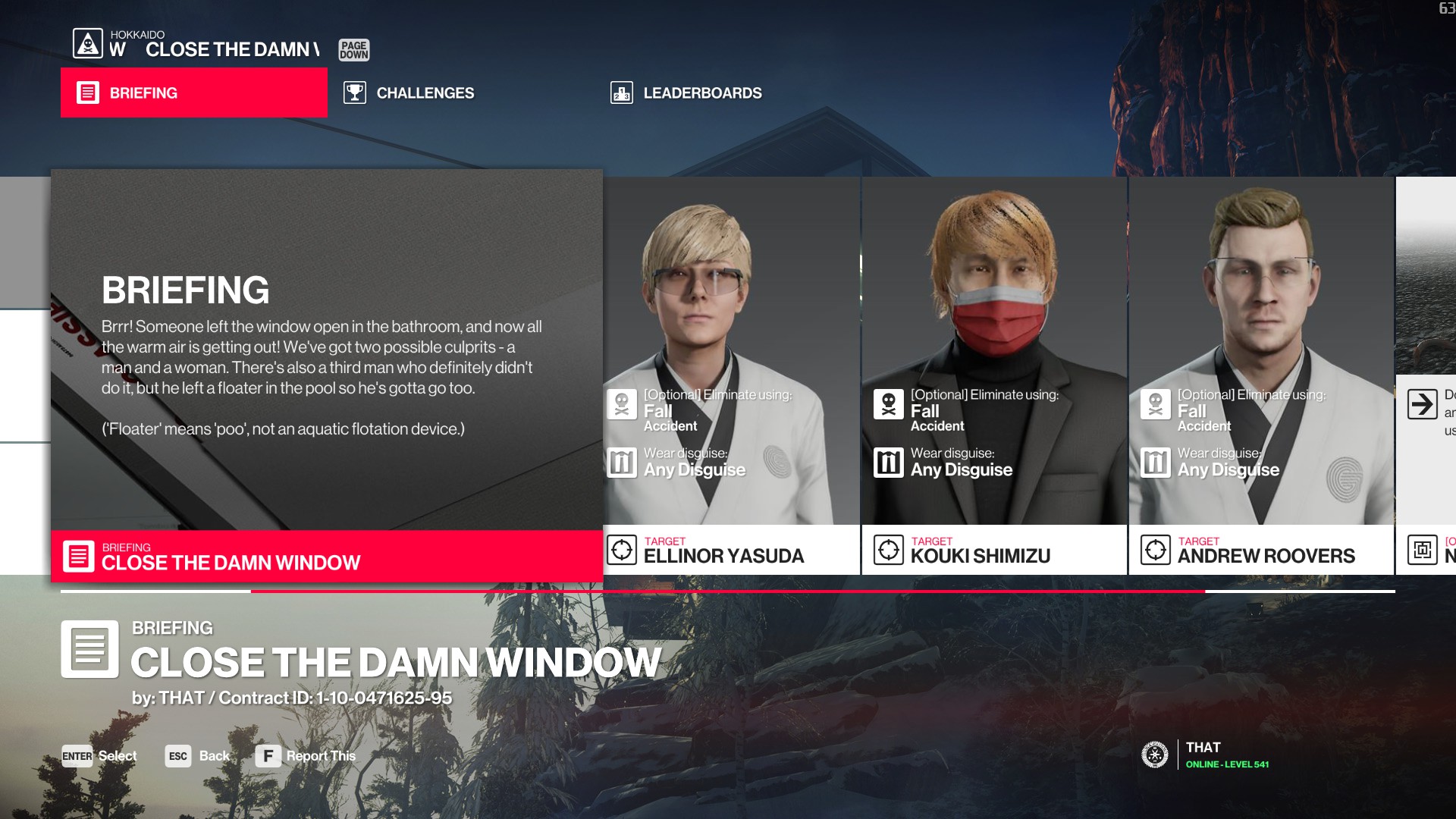 3 targets in the hospital, fall accidents, optional no pacifications. 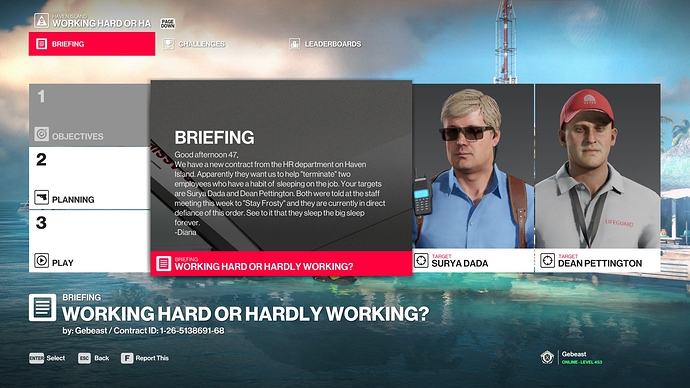 We have a new contract from the HR department on Haven Island. Apparently they want us to help “terminate” two employees who have a habit of sleeping on the job. Your targets are Surya Dada and Dean Pettington. Both were told at the staff meeting this week to “Stay Frosty” and they are currently in direct defiance of this order. See to it that they sleep the big sleep forever.
-Diana

Why the contract should be featured: Since stay frosty essentially means stay alert, I think this contract is fitting as it shows the consequences of not staying frosty in the Hitman world. The contract can be completed in more than one way and you can definitely do a SASO run.

@SASO
I tried your contract.

In 2007, a certain organization suffered substantial loss of personnel by the hand of a hired assassin. It is assumed that this assassin will soon attempt to re-enact his infamous killing spree in the city of Mumbai. You are to eliminate him and carry out the deed in his stead.

All jokes aside though, this is pretty much the (sub)theme I was aiming for: LOVE IT / HATE IT.

LOVE IT, because it pays tribute to a piece of art (I did my best to find locations and targets that match some of the hits in the movie as closely as possible. If there’s a way to get the Kashmirian to the train yard, other than dragging his body there, please let me know).

HATE IT, because it basically does everything you hate about Hitman contracts: limiting your options to a ridiculous extent. Not even the loadout has any sort of wiggle room. So it should be easy enough for you to figure out, right? Or, in the words of Sidney Wang: “Answer simple, but question very hard.”

Bottom line: it’ll probably leave you with mixed feelings, just like the film might have. Don’t go too hard on me though, I promise I’ll do better next time. Maybe.

/edit 1: I’m actually already working on a version that’s less restrictive in some ways, but gives you more food for thought in others. Feedback on the current contract would be much appreciated, DMs are open.

/edit 2: Revamped contract is up. If any of you already played the previous one, don’t worry - it’s not for naught! Both have their PROs and CONs. Just look at it as a different approach, hopefully one that will allow players to be a little bit more creative. Just a little bit though. ;D 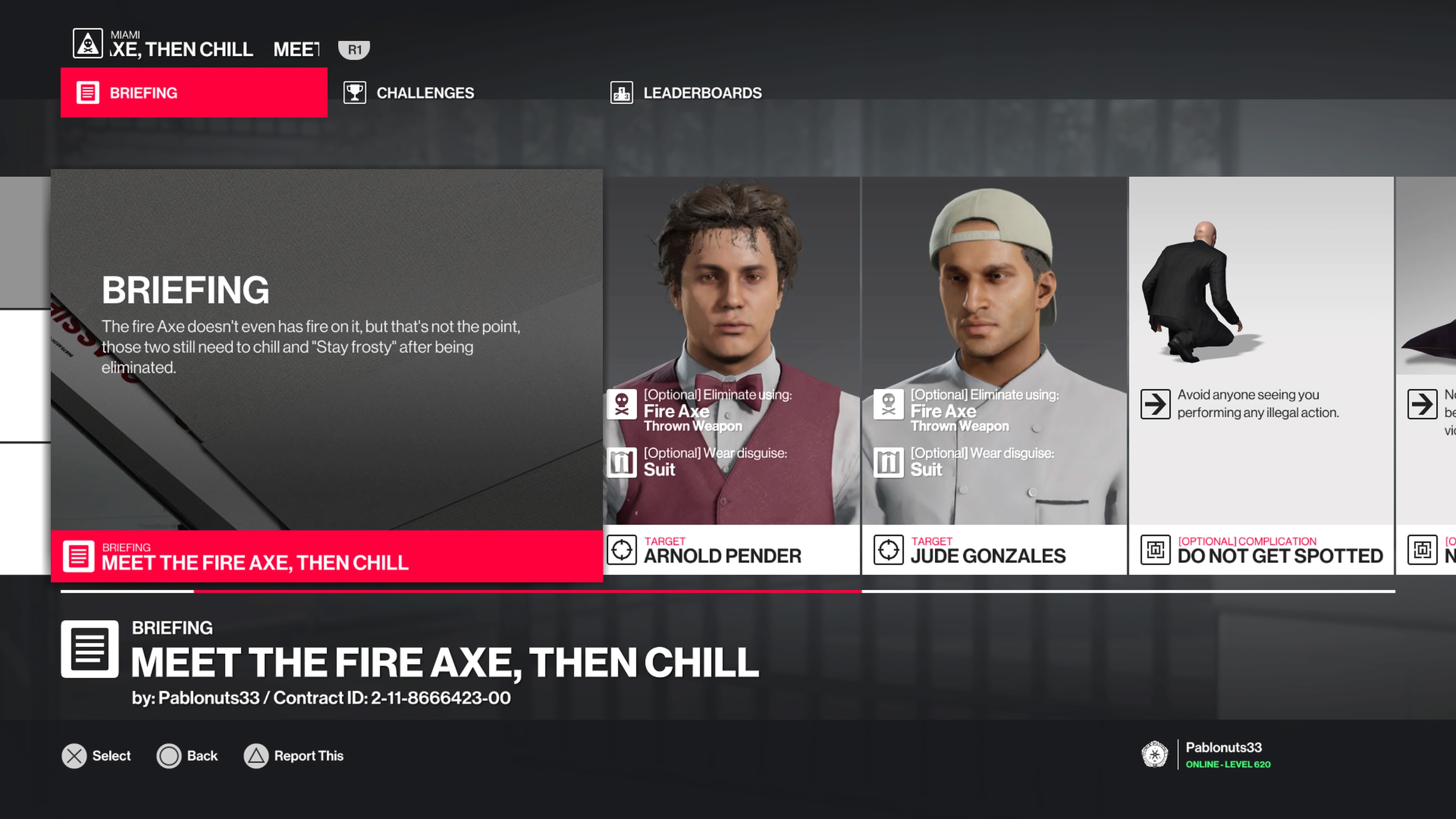 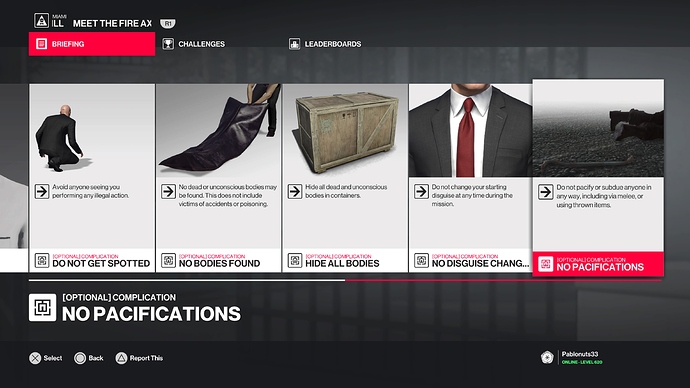 Name of Contract Meet The Fire Axe, Then Chill

Description/Briefing The fire Axe doesn’t even has fire on it, but that’s not the point, those two still need to chill and “Stay frosty” after being eliminated

Why the contract should be featured Not hard, but not that easy, it requires some basic understanding of Miami’s map

Nothing not relieves from a hangover after 1s January better, then morning Cold Yoga with 47’ style!
But, unfortunately, J. Brooke don’t know how to engage a cold yoga! Maybe, new bald instructor 47 show a “class”?
And… relax and enjoy!

Name of Contract
Punishment Of The Patrols

Description/Briefing
These may be your brothers in arms, but siblings don’t always get along. It’s time you punish them for the horrible things they said and done to you by getting them back while they are distracting themselves for being focused, when they’re on patrol.

I submitted this one in February but I think it fits the theme again.

Female servants of Vanya Shah receive food and shelter, in return they commit themselves for their entire youth. They also get the chance to be married to Shah’s wealthy business partners. A soon-to-be candidate is the Maelstrom, so such a day is approaching.
However, who loses her virginity receives punishment. Also, since Shah is never revealing her knowledge until the next marriage, the service continues with constant fear. So one is not only hoping to marry, but also to survive that day.

The theme is “stay frosty”. If you read the briefing, you see this is the motto of the female servants of Shah. The player also has to stay cool because the environment around gasoline drums is hot, and getting the targets there both without KO is making one sweat as well. It might turn harder for those who already had trouble with the “Where Patients Meet” contract as you cannot carry the drum around. But at least you decide which disguise to use this time. And the targets don’t run around. 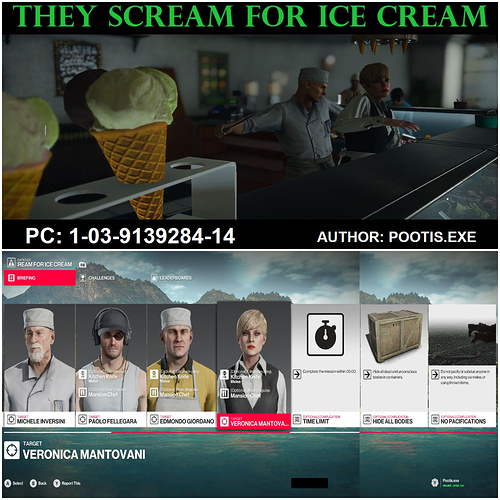 "47 has opened a small business selling ice cream in Sapienza. They’re selling like hotcakes thanks to 47’s mysterious ‘special ingredient’ that turns the ice cream dark red and adds an indescribable yet delicious flavor.

Unfortunately, a café in the town square is stealing his customers, and 47 has decided they need some new management.

He plans to replace the head chef and to put the other ingredien— I mean, employees into the freezers in the basement. Time is money so he needs to act fast."

Briefing: Good afternoon, 47.
Your targets are Lena Nilsson and her lover, Izo von Kaishev. Together, the duo go under the alias of 'Frosty the Snowman’s and send information to news channels across the globe, destroying both lives and companies in the process. For the better part of a decade, Frosty the Snowman has inadvertently been the cause of mine suicides by the end of their last January run. Our client, von Kaishev’s wife, has placed a contract on their heads upon discovering the growing affair between Nilsson and von Kaishev.
Good luck.

Why the contract should be featured:
Well, I’ve given the contract some of what I think is decent backstory within the briefing, and I feel like several meanings of ‘stay frosty’ can be found throughout. The first is the name of the contract, which is ‘The Snowman’. I get that it might be a bit on the Christmas side, but I feel like that’s kinda the point? Frosty the Snowman only stops giving news stations information once January ends, but then I guess the term ‘Stay Frosty’ can mean to hold onto the Christmas season for as long as they can, if that makes any sense.
My number two point more or less falls in with the statement above, and that’s that the two targets in the contract are going by Frosty the Snowman as their alias while leaking big information to the public with the help of news channels. Really, this point is just tied up with the first one.
My third point is that Lena Nilsson and Izo von Kaishev are having an affair that his wife discovers it and kinda turns cold to him, which the word ‘frosty’ can mean. Cold and unfriendly. I mean, even in the contract, von Kaishev’s wife sits further away from from him then anyone else, and I know that’s his wife because her in game name is von Kaisheva or something along those lines. Anyway, she’s cold and distant to her husband after finding out about his affair.
My last point, I think, is that both targets can be optionally eliminated using an ice pick melee. I was thinking that this would be karma for them, considering the whole Frosty the Snowman schtick they have. Really, I thought it was ironic to be killed that way, but you can be the judge of that.

Now, since I’m not being let go use a photo of the contract for some reason, I’ll just type everything else here, I guess. Both targets have the optional objective to be eliminated using an ice pick and while wearing a suit.
The only complicated the contract has is the ‘no changing from starting disguise’ one.

And you know what would be an absolutely fantastic Christmas present? Having one of my contracts be featured