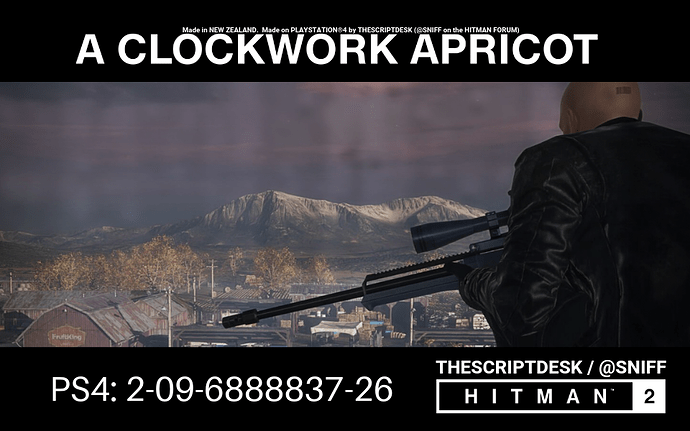 Briefing:
These horror films from the 20th century are much better than most coming out now.

All the 21st century films are just soft reboots, like this new film from New Zealand.

Why the contract should be featured:
It’s Halloween. For all those who don’t go out at night getting candy from strangers, usually there’s gonna be something else for you to do, probably a movie.

A Clockwork Apricot is a contract I’ve been willing to make for ages, and now that there is a theme that fits it, it is one of my submissions this month.

This has got to be something of a good joke, right? 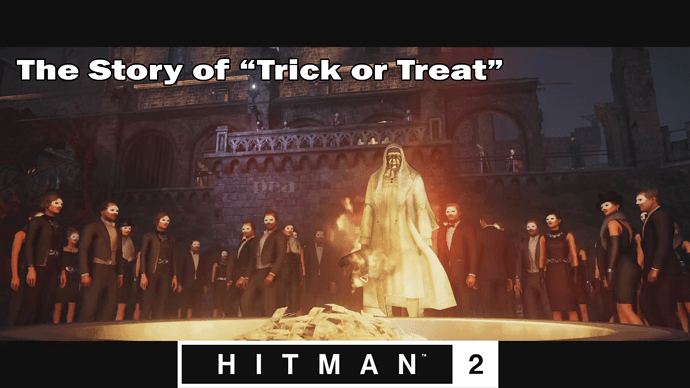 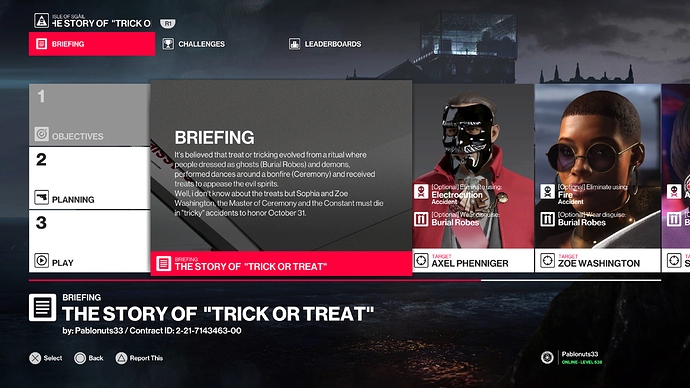 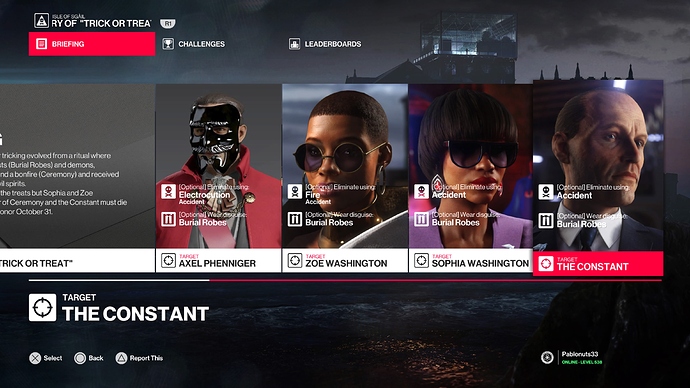 Name of Contract The Story of “Trick or Treat”
Contract ID 2-21-7143463-00
Platform PS4
Location Isle of Sgail
Description/Briefing
It’s believed that trick or treating evolved from a ritual where people dressed as ghosts (Burial Robes) and demons, performed dances around a bonfire (Ceremony) and received treats to appease the evil spirits.
Well, i don’t know about the treats but Sophia and Zoe Washington, the Master of Ceremony and the Constant must die in “tricky” accidents to honor October 31.

Why the contract should be featured I did a little research about the story of “Trick or Treat”, i think the story between the “ghosts, demons and bonfire…” match with the Isle of Sgail theme

Name of Contract Curse of the Run-Killer 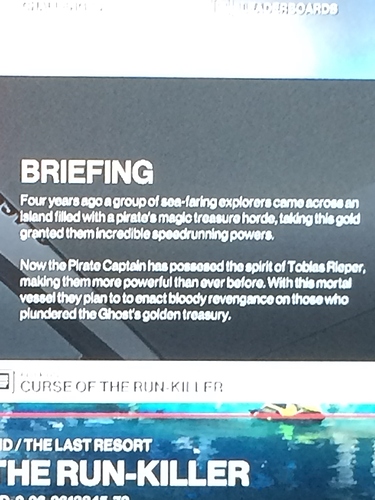 Why the contract should be featured A fitting contract about a Halloween-y trick, featuring a pirate ghost possession!

Name of Contract Halloween in Columbia

Description/Briefing
The Fishing Village people are not too excited about Halloween. Some of them don’t seem to have any sense of humor at all. Well, why don’t we just go and spread the traditional American festive spirit over Santa Fortuna? It might even leave a mark.

It’s a 5-target contract in Santa Fortuna around the harbor in the Fishing Village. It includes three different kill methods which are Accident, Melee and Any Method. All the eliminations must be done in Suit, but you are not forced to wear a suit throughout the contract. Only complication is an optional No Bodies Found.

More specifically, the targets are all residents of the Fishing Village and almost all of them are inside a house at first. One target will wander to her apartment from the pier after some time. The targets, that must be killed in an accident, provide the player multiple opportunities to do so.

If the player enters an apartment while their residents are in it, they will aggressively confront the player. All targets in this contract will act in that manner. Some apartments have a doorbell which can be interacted to lure out a target for additional contextual game play.

This being said, I think it fits the featured contract theme well and would be enjoyable part of the contract batch for all players.

Name of Contract Toast Her In The Tub

*Description/Briefing
Haven Resort is currently hosting its Halloween event. The turnout is low. For some
strange reason people don’t come to the Maldives for Halloween.

Haven thus wants us to enhance the atmosphere by killing some people here via
mysterious accidents. These deaths will get reported in the media, and Haven’s
marketing team will then use this as a chance to attract the thrillseekers and dark
tourists.

Any publicity is good publicity 47. Let’s make this Halloween as electrifying as possible.

Targets
4 targets are by the resort pool and one of them is at Portman’s hut. 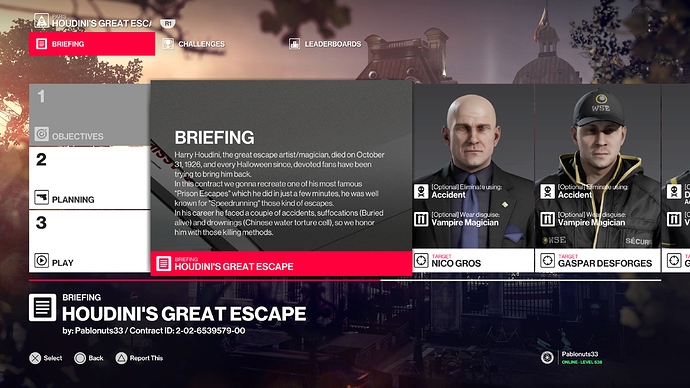 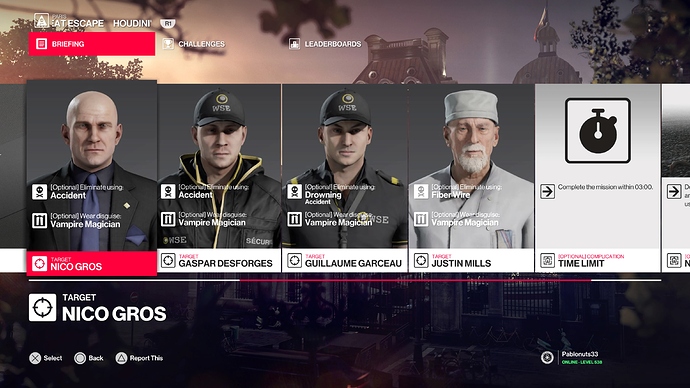 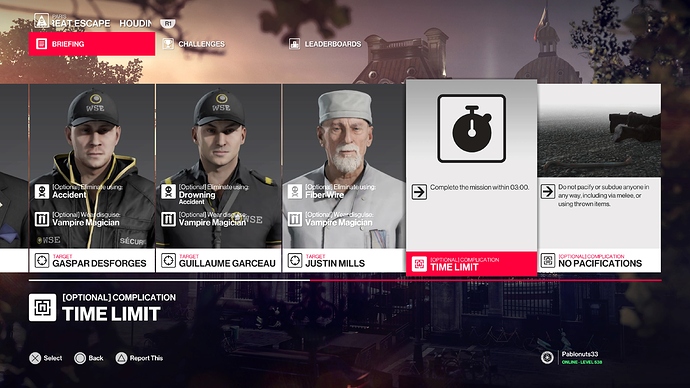 HITMAN™ 2_20191003093839.jpg3840×2160 747 KB
Name of Contract Houdini’s Great Escape
Contract ID 2-02-6539579-00
Platform PS4
Location Paris
Description/Briefing
Harry Houdini, the great escape artist/magician, died on October 31, 1926, and every Halloween since, devoted fans have been trying to bring him back.
In this contract we gonna recreate one of his most famous “Prison Escapes” which he did in just a few minutes, he was well known for “speedrunning” those type of escapes.
In his career he faced a couple of accidents, suffocation (Buried alive) and drownings (Chinese water torture cell), so we honor him with those killing methods.
Why the contract should be featured Quite different from my previous one, this must be done in 3 minutes or less, also, to honor Harry for his legacy and entertainment that inspired plenty of magicians around the world.
6 Likes
List Your Favourite Contracts
Trick or Treat - 11 New Featured Contracts (October)
HITMAN 2 Contracts From HMF Members
HITMAN 2 Contracts From HMF Members
TheContractor October 3, 2019, 1:38pm #33

I wasn’t soled on your contract at the start. But your explanation was great and you personality just seeped through! I really hope this gets featured!


So, our client went trick or treating and everything was fine until he went to the wrong house. He knocks on the door and shortly after a guard opens it. However, this guard is rude. He refuses to give away candy, then slams the door in our client’s face. Our client decides to put a spell on both of the guards guarding the house, and by that it means that he basically hired an assassin to take care of them. So, here comes the tricky part. He wants the assassin, which is 47, to do it in an Halloween-ish fashion. Before killing Liam and Bradley, 47 have to get the Burial Robe disguise, then obtain two melee weapons. The Burial Dagger and a Scalpel. Anyway, this contract is more of an Puzzle than an Speedrun contract, but I’ve been surprised before. Someone might find a way to speedrun it anyway. Also, this contract got a lot of freedom as well.
3 Likes
Honzas4400 October 3, 2019, 4:12pm #35

See the costume he has on,
it’s scary and holy too,
See the weapon he has on,
his beak staff will split you in two. 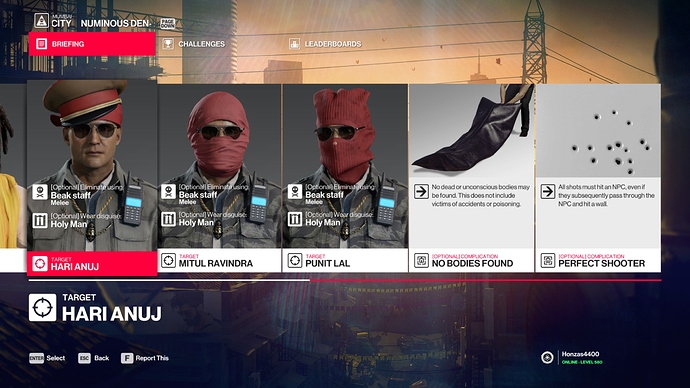 Why the contract should be featured:
Arguably, Mumbai doesn’t really have too much of a Halloween-y or scary vibe to it, but I figured it would still be an interesting map to explore in this context. Hence why I chose to focus on the “den in city” (ding ding we have a name) - the crow’s nest. It’s in underground and rather isolated, perfect for some spooky times, and it’s personally a location I visited probably the least in all of Mumbai. There are three targets in the den, and each target is with one other person, so the player must find a way to separate the non-targets from the targets and then dispose of them quietly. I’m sure their partners will be proper spooked when they return to find there’s no one else

Also, the beak staff and holy man are in a pretty close proximity to the den (which also has a exit), so no needless running around.

I also ended up making the holy man himself a target so that he is (or rather his disguise) easily trackable and findable. Plus I’m rather proud of that absolutely stupid punny name and I want to hear @PEA say it in his video, so you HAVE to feature it! 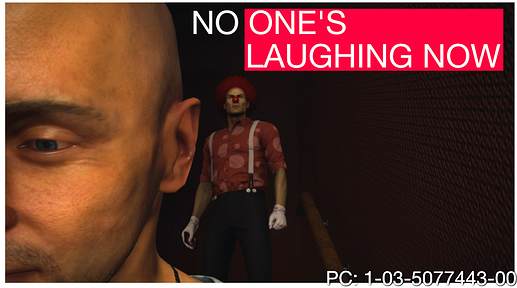 Briefing:
Society hasn’t been too kind to German performance artist Tobias Ernte aka Corky der Clown. He was put into crates and had fireworks thrown at him by the Halloween candy snitching children next door. Now, years later, it is up to Corky to return the favor and put them away. Forever.

His former bullies, Claudia Di Meo and her baby brother Rocco, are currently residing in Sapienza, Italy. While Rocco eagerly awaits a parcel delivery, his sister tries to make him go to work for a rich scientist.

[The briefing descriptions are just too short to tell a story, man. :D]

Even though the complications seem restrictive, they are really not because both targets are close to each other (pun intended!).

Oh, and of course because it is not Whittleton Creek and has Corky in it!

Description/Briefing:
Once upon a Paris dreary, while I pondered insensibly,
Over many corps’ and targets dying by me gentle hand—
While I shooted, nearly napping, suddenly there came a tapping,
As of some one gently rapping, rapping at my chamber gate.
“’Kill thee targets,” Voices muttered, “kill them all with just thee swor’—
Only this and nothing more.”

The Raven! IO, you must pick this one!

Description/Briefing:
47, our client wants the haven’s lifeguard team removed because on several occations their team perfomed very poorly. The client lost potential buyers and contracts in the millions because of mistreatment after accidents ocurred and the loss of lives.

The client requested that the lifeguards are removed by accidents so that they ultimately also failed at their vocation and proctecting their own lives. 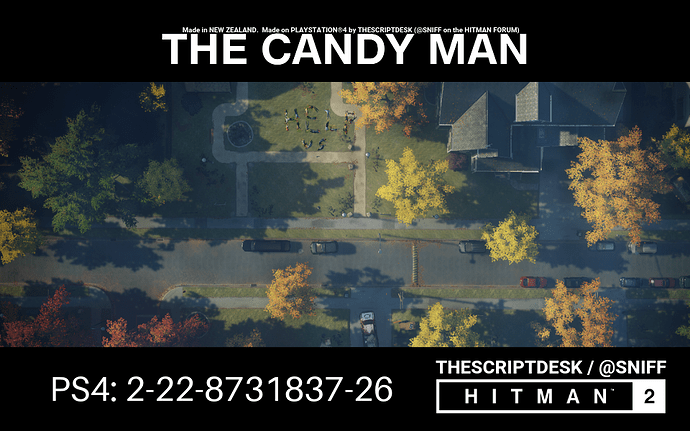 They later started experiencing specific symptoms caused by EXPLOSIVE popping candies, CYANIDE muffins and something we have yet to determine.

Why the contract should be featured:
This contract uses three very well-known NPCs and gives them somewhat hard kill methods (depending on who you are and how you play) with the server disguise only and it gives a chance to try out the new emetic gear from last month; we also need more contracts where the Servers, in the briefing, call Helen “Mother West”. 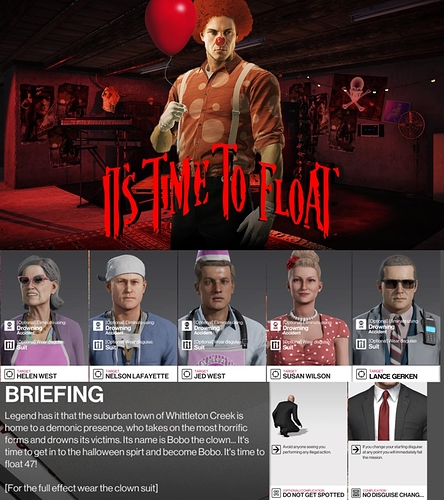 Briefing: Legend has it that the suburban town of Whittleton Creek is home to a demonic presence, who takes on the mist horrific forms and drowns its victims. Its name is Bobo the clown… It’s time to get into the Halloween spirit and become Bobo. It’s time to float 47!
[For the full effect wear the clown suit]

Why the contract should be featured: Time To Float is a fun IT themed contract that both fits the theme (as becoming one of the most iconic horror monsters is pretty spooky), it also provides a good challenge (it took me a few attempts to get it right). Furthermore, it is a good opportunity to use the new emetic items introduced with Haven Island (although you don’t have to). The complications encourage you to be a ghost (SASO is possible) but does not force this upon you and the fact you have to stay in your suit makes you really feel like a horror monster, sticking to the shadows to get to your victims. Overall it is a fun and thematic contract that is worth a play.

Liking the contract for that title alone. 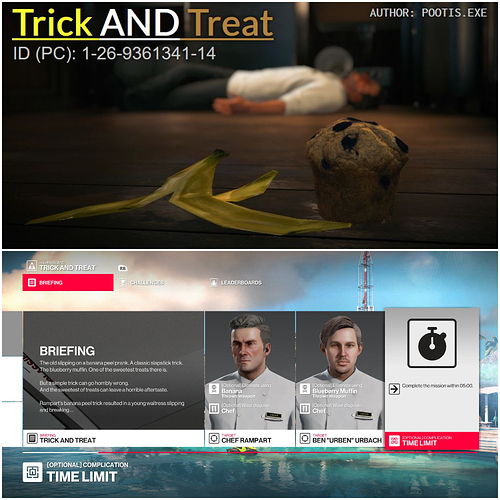 "The old slipping on a banana peel prank. A classic slapstick trick.
The blueberry muffin. One of the sweetest treats there is.

But a simple trick can go horribly wrong.
And the sweetest of treats can leave a horrible aftertaste.

The victims’ families want them to pay, and quickly."

I swear I am innocent.

Your cooking killed a man! Don’t try to deny it!