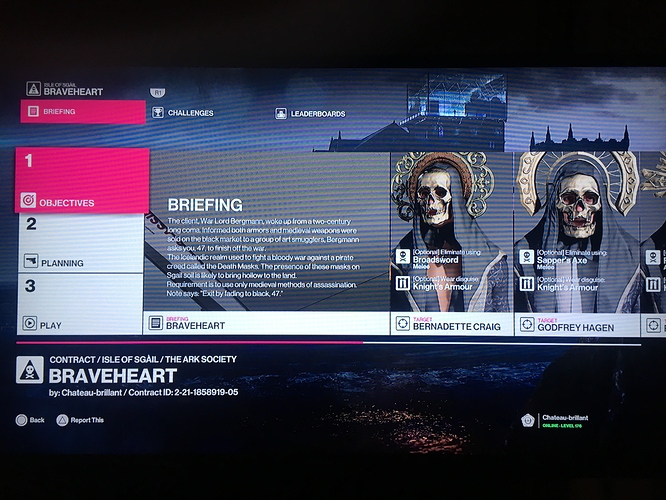 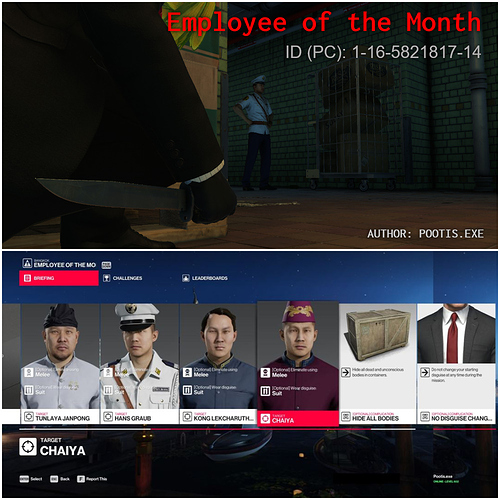 Name of Contract: Employee of the Month
Contract ID: 1-16-5821817-14
Platform: PC
Location: Bangkok (The Source)
Briefing: "The Himmapan Hotel’s employees take the prestigious Employee of the Month award very seriously and are willing to go to extreme lengths to be chosen.

Our client has hired us to eliminate four of his well-performing colleagues, who have a competitive edge over him.

He requests, to avoid suspicion, that you do not use disguises and that you hide all bodies. He is also offering a bonus to kill his rivals using a sharp object.

Name of contract: Race to the Finish Line

Briefing: Good evening 47, our client Moses Lee has become concerned with how close the race has become and has requested that you eliminate the head mechanic from all four opposing teams in accidents inorder to divert suspicion. Time is of the essence 47 all targets must be eliminated before the race ends inorder to guarantee that Lee wins. This is quite the fierce rivalry 47 good luck.

The contract sees you trying to give Moses Lee a “competitive edge” in the race fitting the theme.

It balances challenge well (targets are around others and must be eliminated in accidents and there’s a time restriction) but gives freedom with how you can complete your objectives (there’s no disguise restrictions and the targets can be eliminated in any accident) which I always find more fun than contracts that restrict you at every turn.

After 800 hours of Hitman (S1 and S2), I finally got confident enough to submit my own contract. I do think it’s a good one 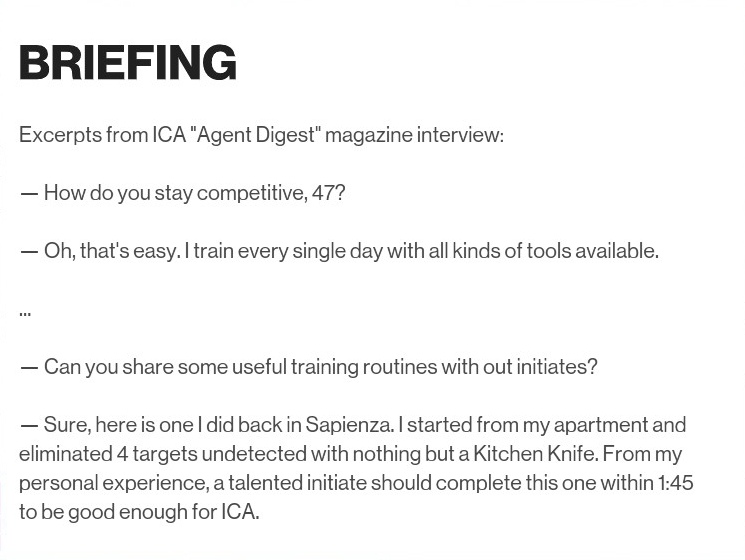 Why the contract should be featured
Contract embodies “Competitive Edge” theme of this month through the Time Limit (Keeps players on the edge without being brutal or unfair) and Description (This contract is a training routine 47 offers to ICA Initates who want to be competitive enough to become agents). Also, knife edge

From the gameplay perspective, this contract suits both skilled players (for them it will be a nice and quick “Exercise”, just like the name says) and casual players (for them it will be a perfect short training routine that demands improvement upon each iteration). Personal tests proved that contract can be completed within 1:30 seconds as opposed to 1:45 timer which gives players at least a 15 seconds window for unforeseen situations.

Pacing of the contract strongly implies starting in the ICA Safehouse, grabbing a kitchen knife and staying on timer. All the other tools are up to the players. 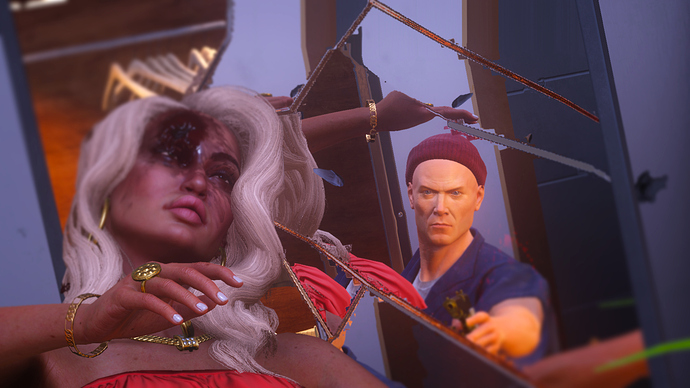 Good morning, 47.
Your targets are Catalina Delgado and Margarita E. Bergeron, two well known faces in the world of cosmetics and plastic surgery. Since adolescence, the fear of transient beauty has played a central role in shaping both their minds and bodies. However, as they grew older, it became apparent that their once intimate friendship had turned into a fierce competition.
Now both have approached us to eliminate their counterpart in an all too familiar way.
I will leave you to prepare.

I wanted to feature Catalina Delgado so I created this contract with two themes in mind:

The most notable thing about Catalina — next to her distinctive clothing style — is her history with botched surgeries. I incorporated the theme of Fierce Rivalry into the story of my contract by imagining two people, who would compete to fight the transience of beauty in order to be the „fairest one of all“ which alludes to the second theme of my contract: Snow White.

By disguising himself as Submarine Crew, 47 can finally fulfill his wish of becoming one of the seven deadly dwarfs. Lastly, there’s just one restriction forcing you to exit via the speedboat.
Enjoy! 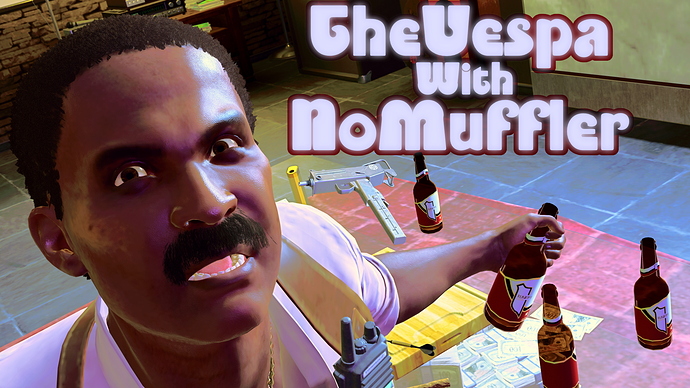 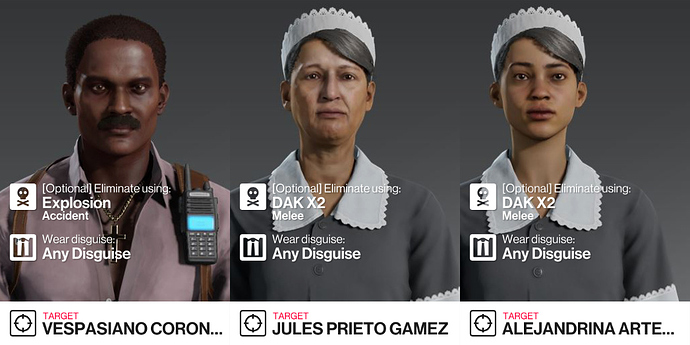 Vespasiano is loud. He speaks loudly, he tramples loudly, he farts loudly. And laughs loudly about it too. He also races his loud scooter through the village. As if it was a big competition who is the loudest.
He is so unpopular that the whole village has collected enough money to hire us. The whole village? No, two housekeepers who rave about him threaten to expose the conspiracy.

(“DAK X2 Melee” is a Pistol Elimination with Vespasiano’s gun.)

Why the contract should be featured:
I guess the kill restrictions already show it is something unique. The whole action happens in the mansion basement and the source of the required gun is sitting just near your start. From there on you are free to decide what to do and in which order. It will be loud in any way so you have to get rid of potential witnesses and quickly hide the body. Luckily, here the lures work very reliable it seems and are less random than usually in H2 compared to H2016.
The contract offers the possibility to be done Suit Only, No KO. Though I really would not recommend it as it seems to be a theoretical possibility to be honest.

we’ve learned that Mumbai is a sort of hotspot for hitmen right now. The Kasmirian and four other hired killers reside in the are at the moment, and this presents us with a perfect opportunity to get rid of the competition without being blamed.

Kill the four assassins with Kashmirian’s signature weapon of choice (Antique Curved Knife) and leave without being seen. Other agencies will retaliate againts him and we’ll walk away unscathed amidst the chaos.

Why the contract should be featured:
There’s never enough Mumbai stuff, easy as that. With the recent release of Antique Curved Knife unlockable by completing the Mumbai challenge pack, I figured I could make a contract using that weapoon in that location. It’s not a hard contract but requires a little bit of patience at some points. And it was also ‘designed’ with Emetic Grenade unlock in mind, which could come quite handy when it comes out.

I actually finished with sugar squirrel as the last kill. And I definitely did not start in the garage. It was lovely to see a whole other way of doing it.

Your way was ten times more exciting than my way too, with all the yellow shit and static noise lol. Thanks for playing!

Hey no problem, i love those kind of contracts, keep them coming

You are a food vendor who intends to do whatever it takes to have the most successful food stand at the Global Innovation Race. Take out the competition.

Why this contract should be featured:
This contract is of medium difficulty. Not too easy, not too hard. The targets are in public areas but they are all “Any Method” targets. There is a disguise requirement but it puts you very close to the targets at the beginning. And of course, it fits with the theme of you taking out rival food vendors.

Nice. Had no idea how else to distract the foreman before he went back to construction site. Beautiful. 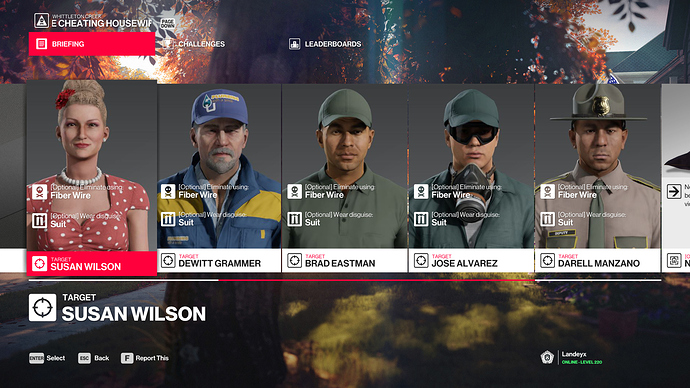 Mr. Wilson found out his wife is cheating on him. He contacted us and wants us to eliminate his wife and and all the men she’s f*cked with during the short period they’ve been living here. This is a weird neighbourhood after all, so you should be able to do this quickly and quietly.

Your targets are Ms. Wilson, the local plumber, the gardener of the Wilson house, the exterminator who visited the residence and Officer Darell. Good luck.

Why the contract should be featured: This was actually the first contract I ever made. I made it back when the game released, in November. After having played through all the maps and everything I came with the idea to make this contract, a story of a cheating housewife and the rivalry between all the men she pleased. Of course, the husband is smart enough to contact the ICA. But what really fits the theme of “Competive Edge” is a story linked to this contract. I shared this contract on Reddit and Discord.
A player came along challenging me to set a better time than him on the contract. I tried to do that for hours upon hours, running faster, killing faster, until I was a second faster than him on the leaderboards, taking the top spot again. Then he did it a second faster. Then I did it another second faster. This went on for hours, days, trying to set the best time one or two seconds at a time. Then, at one point, he did it 12 whole seconds faster. The madman somehow did it 12 seconds faster and I just gave up. Until this day, he’s still number 1 on the leaderboard. But if it was featured, would he still be number 1? Or would someone be even faster? I loved perfecting my contract and my run through the competitivity, and feel like it’s a perfect fit for this month’s theme. 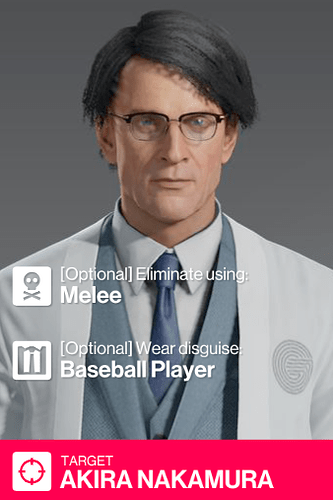 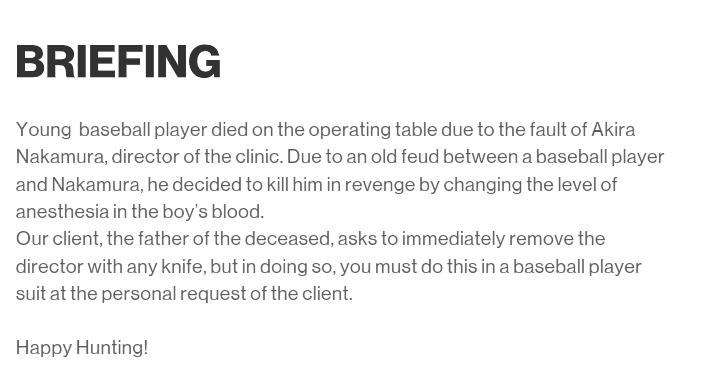 P.S of course, he does not correspond to the theme of the month for ANYTHING! But I believe that he is worthy to reach the path to the featured …

Name of Contract - The Promotion Predicament

Description/Briefing - Waleed is retiring. That means there’s a prestigious waiting position available inside Shisha Cafe. Unfortunately, the others want to work in the VIP lounge and are applying too. Give Nabhan, the head waiter, no choice as to who he promotes.

Why the contract should be featured - This contract fits nicely with this months theme, 47 needs to ensure his promotion the only way he knows how.
I’ve intentionally left out all complications (except the disguise, so it fits with the theme) so players are free to complete the contract in many unique and exciting ways, however they see fit, not limiting players to a specific method.
For a little extra immersion I’ve used NPC names from the waiters in the courtyard. Waleed is the balding, older looking (retiring) waiter and Nabhan is the enforcer for waiters disguise (head waiter). 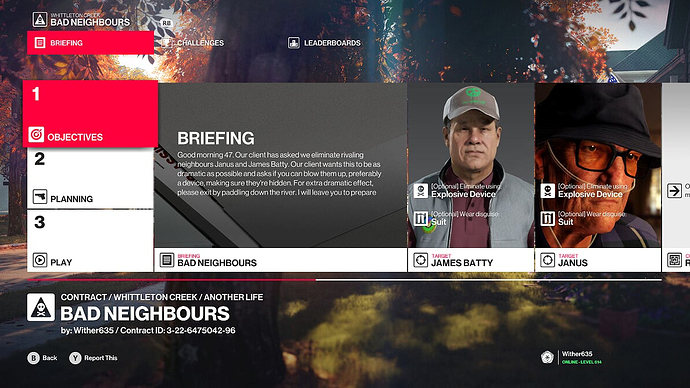 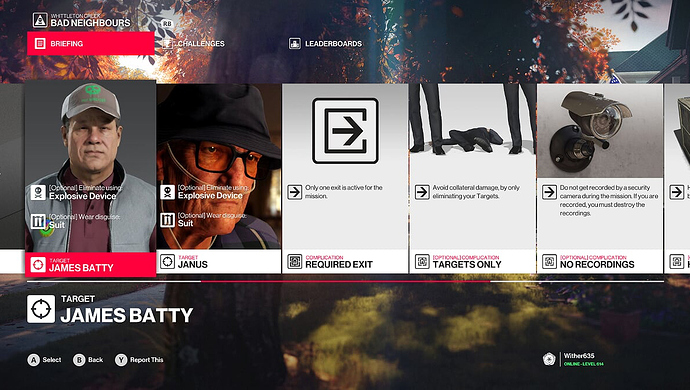 Good morning 47. Our client has asked we eliminate rivalling neighbours Janus and James Batty. Our client wants this to be as dramatic as possible and asks if you can blow them up, preferably a device, making sure they’re hidden. For extra dramatic effect, please exit by paddling down the river. I will leave you to prepare.

Why it should be featured: I think that this should be featured because it fits with the theme of competitiveness and rivalry between Janus and Batty, due to the lawsuit. The explosive requirement makes it feel that much riskier and more like a competition, whilst also making players think more carefully about how they perform their kills, and not just rushing in and tranq glitching. The required exit requires a little map knowledge from players and makes the contract that bit more interesting to play. 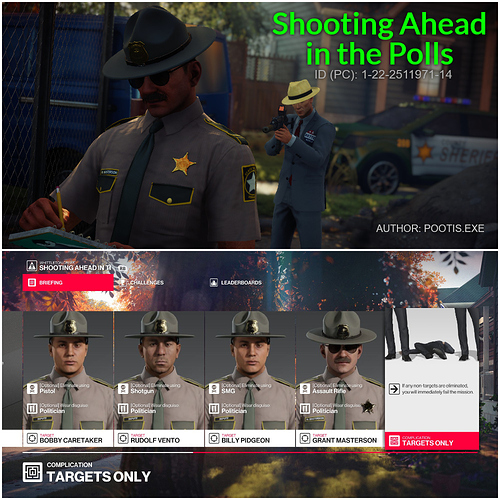 Name of Contract: Shooting Ahead in the Polls
Contract ID: 1-22-2511971-14
Platform: PC
Location: Whittleton Creek (Another Life)
Briefing: "Despite seemingly being unpopular with residents, Charles Blake III is edging ahead in the polls; much to the dismay of his political rivals.

She has hired us to implicate him in the shootings of four local police officers in order to sabotage his political image.

She insists however that Blake himself is NOT a target and must survive.