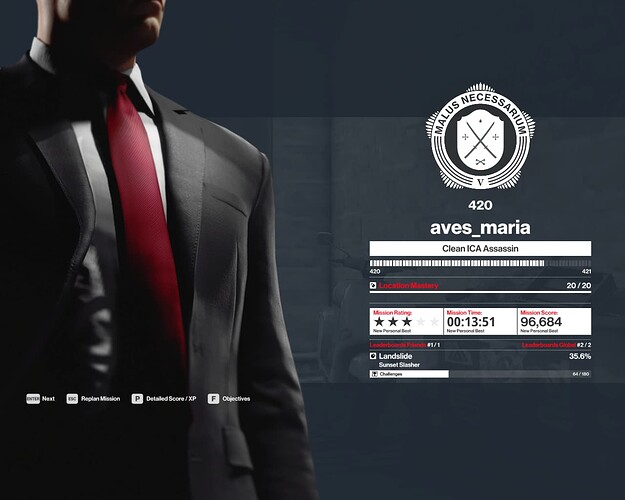 I followed the rules.

Mission debriefing: Brought the Sieker, an emetic briefcase, and a lockpick because the only way I could think of getting targets I assumed were out in the open would be to make them sick. Decided to wear the scarlet suit for valentine’s day (the most important loadout consideration of course). Got spotted trespassing twice while trying to figure out how to get into the apartment, but managed to get the knife without being seen. Headed all the way down back out onto the public square and went to grab Piero first. After he left his conversation with the woman on the stairs, he headed for the bathroom. I decided this would be my chance to Sieker him, but I forgot that the dart guns make noise, so he turned around and spotted me. I decided that I would have to kill him right then and there to prevent him from alerting everyone else nearby. Fortunately, I was out of sight of anyone else, but the woman heard the sound of the stab. I got out of there before she could spot me next to the body though. Next two targets were much easier after following Hansi to the concert and locating Matteo nearby. Hansi got the briefcase and Matteo got the dart. Eliminated them in the bathroom and hid the bodies one at a time, then left the knife neatly placed on top of the container. I’m assuming that counts as near the bodies. It might be harder to connect Piero’s back alley shanking to Camelia, but I’m sure the agency can pull a few strings.

All in all, this was a neat contract. Nothing too complicated, but the challenge of obtaining the knife was fun. 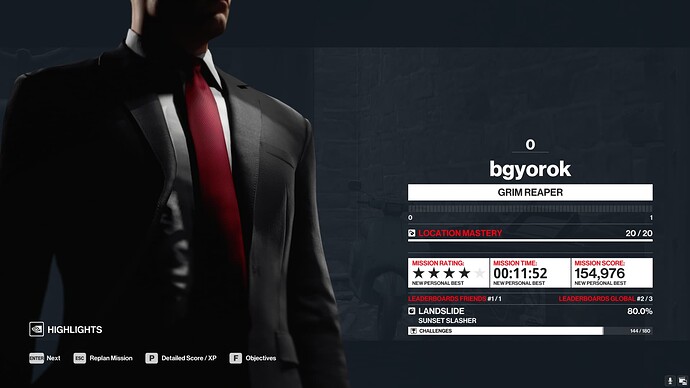 The targets are really interesting and after coming really prepared with a lot of emetics, It turned out that the targets’ routes actually allowed you to not use emetics and still get away with it (although they were in some risky spots) I also found the knife objective really interesting.
Now, onto the run itself. After climbing up to the ICA safehouse and climbing down to get the knife, I was spotted by a bodyguard, so I had to kill him. The game almost screwed me over with one of the kills: After trying to emetic one of the targets, they suddenly entered panic mode. Somehow I wasn’t spotted. I left Hansi Schumacher and the bodyguard in some risky spots and nobody actually went their way, so I was a bit lucky.
Video up soon.

I took a long route to the apartment and was spotted by a guard for trespassing. I never go there so I didn’t remember who I’d encounter. Did the kills pretty smoothily but the town hall entrance guard (who was an enforcer) also spotted me after the last kill and finally the last body was found before I got to the exit. Not a perfect run but did it without emetics at least!

I took a long route to the apartment and was spotted by a guard for trespassing.

I think I know who you are talking about since he also ruined my SA. Not even sure why he was there TBH.

Your video isn’t up yet, but I didn’t climb to the safehouse so that must have been a different guy. I lockpicked the door at the pipe and went up the stairs. There I was spotted by a guard watching an apartment door.

processing1623×84 19.2 KB
It is currently stuck on processing, but based on your description, I think it’s the same person.

Just to clarify, it’s a bodyguard who is up at the apartment where Brother Akram can be found in The Author?

It was this guy at the roof/balcony. Yes, it’s a guard at “Akram’s apartment” but he’s not where you would go if you take the safehouse route.

With the day at a close, the winner is @bgyorok with 169,976 points! Congratulations, glad you had fun playing. 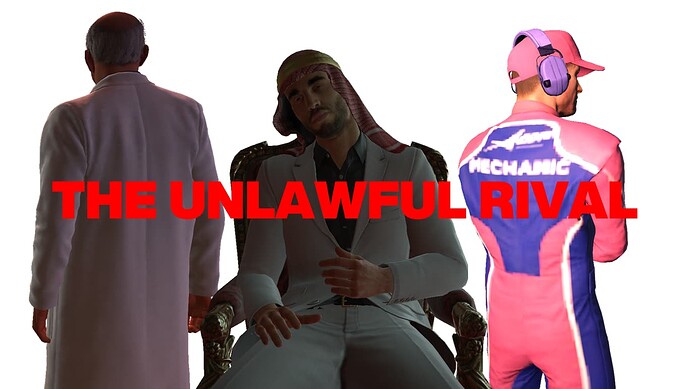 Additional notes:
You must start at the event entrance
You may not eliminate Hector Delgado
You may not shoot any of the drivers on the race track
Optional elimination objectives:

Briefing:
Good morning, 47. I have an intriguing contract for you:
Your primary target is the almighty sheik Salman Al-Ghazali, a wealthy individual well known in the Middle East for his oil plants. His high ego has led him to a bet on an Aeon driver at the Global Innovation motor race in Miami, Florida along with Hector Delgado, a prominent member of the Delgado cartel. They have since agreed to a meeting where they are waiting for the outcome of the race. Your target cannot accept defeat, so he has since hired an inside man in the Aeon team to rig the car with an explosive, which he will detonate if the driver will beat the Thwack driver.
Our client, who just so happens to be Hector Delgado himself, has heard of this exchange and has hired you to eliminate him along with Mikkel Bekenbauer, the person who manufactured the bomb, and Felipe Rojas, the inside man.
We don’t have much time. Intel suggests the race is about to end in 15 minutes and the Aeon driver seems to be in the lead of the Thwack driver. We also cannot give you an undercover spot, so you will have to figure it out from the event entrance. Good luck, 47.

Eliminate all targets in (supposed) accidents or with poison
+10.000

Don’t get this one at all? It’s just a picture with no description.

That’s what I was going for. Although I would need to confirm whether or not the person has actually done it correctly. The picture is just a hint with some minor details (The disguise isn’t important)

That was actually kind of exhilarating. I spent like 10 minutes trying to reach and take out Mikkel, was sure that I wasn’t even going to beat the timer. But then I got seen injecting him and I just started running. Still technically met the “No you don’t” challenge, so +10,000. Took out the last two in quicker succession, made it with about a minute left. Score 74,689 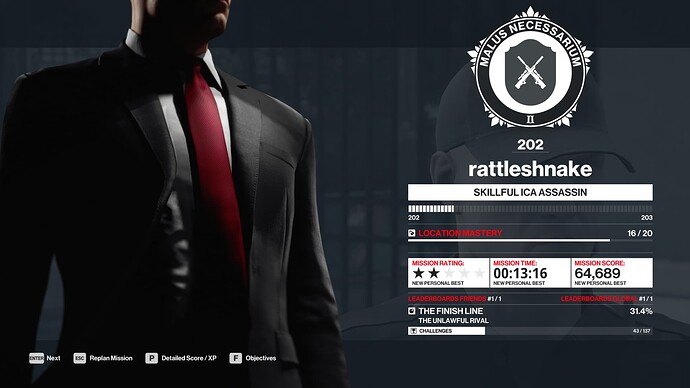 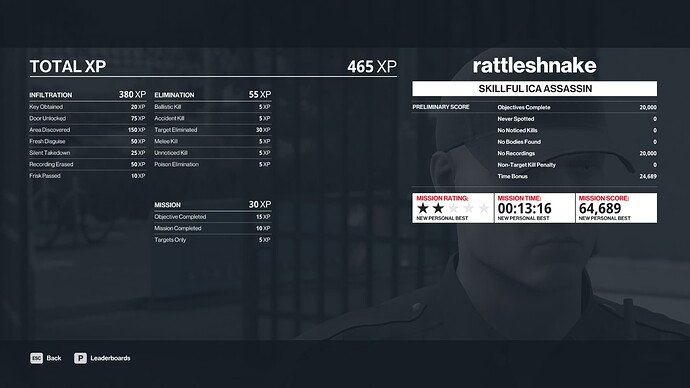 Reminder: The Global Innovation Race is over in approximately 5 days!

Definitely went a little too ballsy on this one, especially the last part lol. Completed all the objectional objectives except for the 2nd one. Couldn’t figure it out

Can you explain it once the deadline is over? Sorry guys, I have not been on Hitman very much recently outside of streams. I will recreate this tonight for @Viv @Krikkit2021. @AgentSnail47 you should get in on this as well.