Question about an old member

Hello all. I used to be a member of the old version of this forum, the one before Ampburner moved to Discourse. I had a question about another old member and wondered if anyone here (Sketch? Kent?) had any news.

Does anyone remember Fallout? He and I used to fight sometimes but I recall him making a post on the old forum about being diagnosed with a brain tumour. Does anyone know what happened to him? Was he okay?

That wasn’t Grim, was it? Not sure what name he went by on the old forum, just that he was there.

Then again, he only mentioned his diagnosis last year and has been sadly inactive since the start of December. Feeling very melancholy about that, i wish there was a way to know for sure - Same as you and this Fallout guy i guess.

I’m not sure if he ever came to the new forum. I recall the diagnosis being quite a while back.

One thing that can be quite hard about forums is the way people can suddenly disappear. You can talk, laugh and argue several times a day and then they’re just… gone. Just static text and a greyed out icon.

I’m sorry. I’ve heard nothing about this.:-/

I actually remember Fallout, he later changed his name to Charm & Strange and became one of our tech support guys. It stuck in my memory as his cancer announcement was so blunt and abrupt.

While the old site no longer exists, I’ve been able to find out quite a bit with Internet Archive to see what happened to him. Here are his original posts from March 2012:

He still posted after his diagnosis and shortly before the forum switched to Discourse in June 2014 the data capture of his profile shows he was last online in January that year.

These are the most recent posts I could find which give updates on his health, as I had trouble accessing anything earlier that would shed light on his condition: 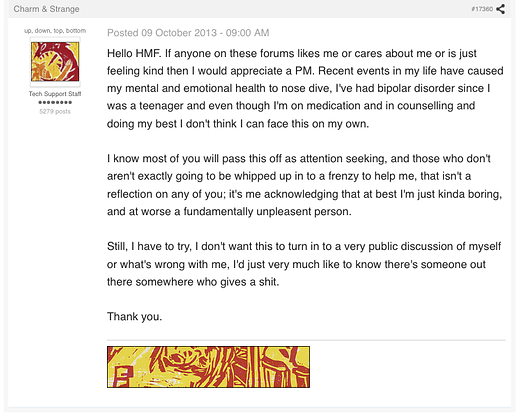 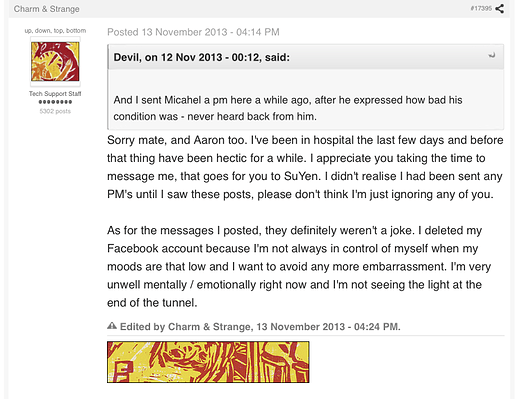 It appears he had some PM contact with @MadMax and @Devils_Advocate based on the above interactions. The last conversation I could find was him debating the minimum wage in Off Topic in early Jan 2014, shortly before he went inactive.

I can only hope he managed to fight the illnesses he was facing, as it’s clear he was struggling with a lot of issues. He doesn’t appear to have transferred to the new forum, as a search of posts didn’t bring up anyone claiming to be him, while his two known usernames haven’t been registered.

It’s sad when old members disappear, particularly ones which used to be active. People like monkeyman come to mind, as well as the infamous Choronzon. I always end up wondering what happened to them; although it’s normal people decide to take a break and end up never returning. We definitely lost a few people after the switch. They lose interest and move on.

Thanks @Bosola for bringing this up though, I hope this helps.

Thank you, Watson. I must have gotten his diagnosis confused at some point. It sounds like the cancer was in remission but he ultimately took time out for mental health.

I used to have problems with depression - well, I still do - and I know how dangerous and life altering it can be. Luckily mine is on the more manageable scale; hopefully Fallout has found a way to cope with things too.

You don’t often get resolution on the internet as, like you say, people tend to either drift away, or if not will just stop posting without explanation. For lack of any evidence to the contrary I’d like to convince myself that Fallout found a way through. Here’s hoping.

Thanks so much for doing this research, it really has helped put my mind to some rest.

No worries, happy to help.

@Bosola @Watson My apologies for the late reply. I haven’t signed into my account since January. Hi, Bosola. Long time, no see. I hope you’ve been doing well. You too, Watson. Regarding the topic, I last exchanged messages with the member formerly known as Fallout in April 2016. I can PM you his email address if you’d like to try re-establishing contact with him.

Good to see you too, MM. If you have an email that would be great.