QuickEdit - a mod editor for Hitman 2

I’ve made a mission creator. You give it objectives through a GUI, it gives you a mod file. Alternatively, it can output a mission script for advanced users to edit manually. 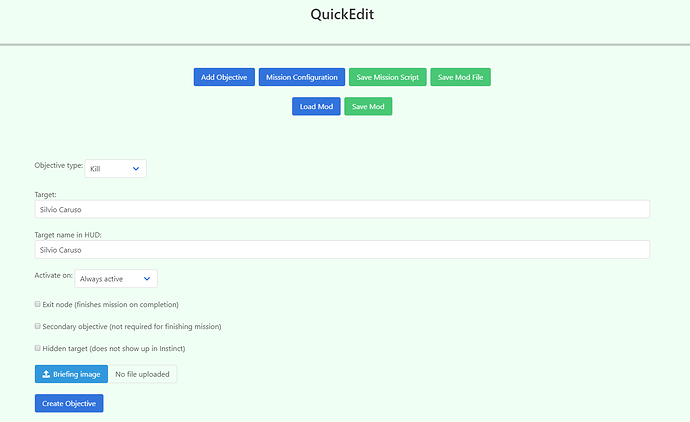 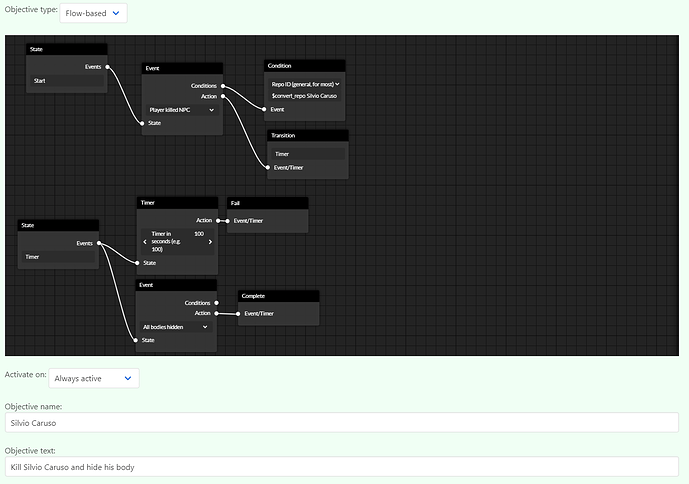 You can add targets with names and choose whether they should be hidden in Instinct as well as a bunch of other attributes, or you can choose the more advanced Flow editor.

Want to create a mission in which you have to carry out a series of strange tasks like hitting Silvio Caruso with a wrench and trespassing on private property, all while a timer is ticking down, forcing you to kill non-targets to reset it? You can do that!

I’ll be adding more features as time goes on. Currently, you can:

Support
If you have a problem, you can post it in this thread or send me a private message. I’m usually quick to reply (well, when I’m not sleeping).

Oh wow, I’m surprised it’s 109mb, was expecting a much smaller thing. Gonna give it a look now

And if anyone actually makes something, make sure to post it in the Modded Missions Thread!

There’s a reason for that - the actual program is about 3 mb, but to actually run it a lot of less useful stuff is needed (Electron).

AVG not liking it is because of Electron, too - it effectively runs a special version of Chrome, which for some reason triggers antiviruses. The actual program is written like a webpage - it can’t hurt your computer. You might need to add an exception.

Already looking great! I love the versatility this offers.

However, I do have one question:

rpkg file is created automatically if you like - you don’t need ZMH5PatchBuilder.

Where is the RPKG file stored? Upon clicking “Save Mod” I don’t get a prompt to save a rpkg file or title it. Is it automatically created and stored somewhere that I’m not sure of?

Have you saved a Mission Configuration?

Alright I think I’ve seen the extent of what it can currently do, based on the dropdown lists; is it accurate to say you can’t add any failure objectives (aka complications)?

So no required exit, no No Pacifications etc?

It seems like you’re halfway there, you can pick pacification and make it a Success event, but not a Failure event.

Yep - that’s my next feature to add.

Have you saved a Mission Configuration?

Am I doing something wrong?

Even when adding an objective I don’t see any saved configuration, nor am I able to save the mod.

I can save the script and the GFXI file, and find it in “mod” but I don’t see a rpkg file.

That’s odd. Can you try this:

Does a file called mod.rpkg appear in the directory?

Turns out I forgot to include the patch builder, despite that being the whole point. Wait a minute, then download it.

EDIT: You can download now. In future, updates will prompt you at the top of the app.

I finished the failure conditions feature - if you redownload through the link, you’ll get the latest version. In future, updates will prompt you at the top of the app.

BTW I love you put what other mods use that slot :’)

EDIT: @Atampy26 Also, was this based solely on the Command list I provided? Cos I expanded that list without adding it to the Modding thread:

CameraXX_HMRecorded (Act of being recorded by CCTV), TaxiDriverDistracted (Mumbai), ExitDisabled, SomeoneServed (As a food vendor, MAY be specific to Haven Island), CaughtEnteringCloset, NPC_Distracted (setpiece distraction, eg generators and power boxes NOT coins and items)

Thanks! I thought it would help people decide.

Yes, the event list was basically just your list and a few others I saw in mission scripts. Thanks for the new options! Just one question, though: does CameraXX mean a code like Camera02 or literally CameraXX?

Yeah, there are tonnes of nearly identical commands, I haven’t tested them all, just seen them in the game. HOWEVER there is a difference between them. Disguise is whatever disguise you’re wearing right now (Can apply from the very start of the mission), you can put in the data of NOT being allowed to wear one specific disguise, where as Disguise_Change means you if you change to anything else at all

I don’t know how complex you’re making your thing, but I’ve come up with at least one which could give you some dropdown options

SecuritySystemRecorder ("$Value.event", “erased”/“spotted”/“CameraDestroyed”/“destroyed”)
So if you put in SecuritySystem Recorder you can have a drop down of choices of manually erasing the tapes (Pressing G or using EMP), being spotted by a camera, destroying an individual camera, or destroying the security box (Gun or bomb)

does CameraXX mean a code like Camera02 or literally CameraXX?

The command said CameraXX, I didn’t save all the raw info to see if it required a specific camera in Data to work.

I don’t have a list, there was so much information for me to manually save in a file to see what mentions Target/Item IDs, but I might in the future. I’m pretty sure actorsick is one though, yes. Same with distractions and Guard’s finding items, you put in the ID of the NPC affected by those things (Not the ID of the Item being found or being used to distract)

You could probably also add “Talk to an NPC” using setpieces (name_metricvalue=47_Dialog_Activated) [Haven’t tested yet]
setpieces is probably the most impressive of the commands, but it requires you to know specifically what data to put in to work, and almost all of them are specific to missions rather than widely applicable.

GameTension_HighAlert didn’t work when I used it.

Dang; yeah I’ve only tested a handful of these ones. Like Surveillance_EvidenceDeleted only applied to pressing G on the machine (or EMP), not shooting the box, so if that’s what you’ve got in the scripter currently then people may be surprised to realise that shooting the box didn’t complete the objective 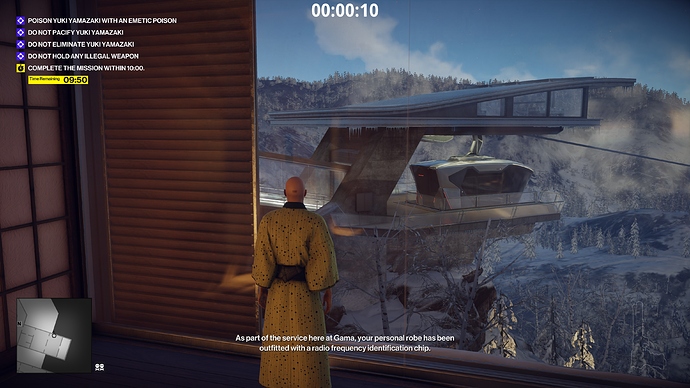 I see myself wasting spending many hours with this.

So I noticed you’re using either icon 12 or 13 based on mushroom’s screenshot above, but the normal icon for objectives (Bullseye symbol on a blue background) is 17

Thanks for both of those replies! I’ve been implementing them for the next update. One thing, though - what does ‘scope’ do in a statemachine? I’ve seen it as either ‘session’ or ‘hit’, and sometimes it’s inside the ‘Definition’ key, sometimes it’s outside.