For curiosity does anybody have a list of all of the suits in H3 from the rarest to the most common?

What is a rare suit? We don’t exactly have drop chances in this game.

There might be suits only available from carryover that are impossible to get. Especially if they are suits that required a certain H2016 progress. The most unlikely one to have is the Black Winter Suit which requires to have killed an Elusive Target in H2016, link the IO account to H2 and then transfer progress from H2 to H3.

The other suits not currently unlockable without fitting carryover is the Santa Suit, the Wetsuit and the Snow Festival Suit. Though these likely come back at some point.

Also check out this great list of all unlocks, sorted by how to get them:

I take it for him to mean what suits are people the least likely to have. I can answer that:
For WoA1 owners it’s the Snow Festival suit, Santa suit, Tactical Gear with Hunter’s Hat and White Yakuta. Snow Festival and Santa arent unlockable in Hitman III yet. Hunter’s Hat and White Yakuta are the same but they also are unlockable only by completing Colorado and Hokkaido ETs so youve got two chances
For WoA2 owners the rarest has to be the Casual Tourist and Suburban suit. Only one try to get these as theyre ET suits
For people who own WoA3 or the full trilogy the rarest suits have to be the Raver suit, Casual Undercover, Arkian Tux, Blue Flamingo, Phantom suit or Classic All Black. The reason why I say this is because all but one of these require a big time sink to get. Completing a lot of featured contracts, getting a lot of the game silent assassin suit only or doing fifteen elusive targets. The only one that isnt a time sink is the raver suit which was time limited and wont be unlockable again until easter

It’s officially the Tactical Gear with Hunter’s Hat because that’s the only one I don’t have.

And from what I understand the Colorado ETs aren’t just rare (2?), they’re also quite difficult so failure is a likely outcome.

If this outfit would be a Pokemon it would be both a regional and a legendary one.

I’d go with this too, because the players who joined H1 after ET’s were done and started playing in H2 wouldn’t have this, also there’s no way you can get it now, where as with other suits people will continue to get them, so if this isn’t the rarest, then it will be

Aren’t there two black winter suits though? One from H1 and one from H2 with the mark two sticker on it?

There is the Winter Suit, which can be unlocked with enough ET progression, and the Black Winter Suit which requires killing an ET in H2016.

They are the same though right? One just has the mark 2 sticker and it’s the other one that is the rare one?

The more regular one has a dark grey coat while the rare one hast the sticker and a black coat. I actually like a bit of contrast between the coat and the suit beneath so I prefer using the regular one without the button.

I’m gonna have to do two runs today now and decide which one I like better. I always assumed the difference was just in the menu screens (like the blue guns from H1) so I never used both of them in game. Thanks for that info!

From the Hitman wikia: 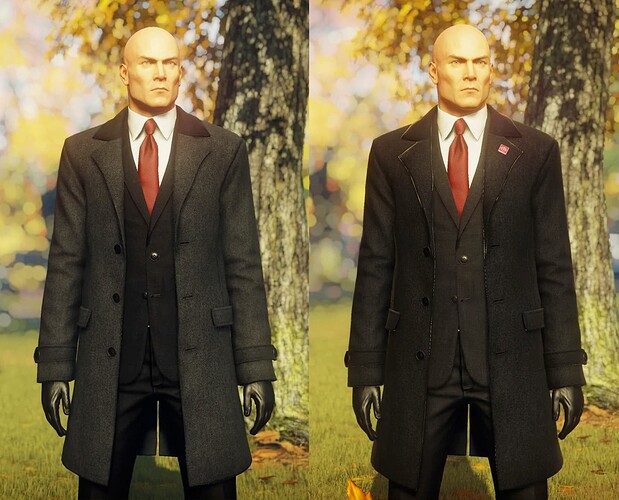 Nice! Well now I don’t need to do two runs

. I like the grey one better (which is the one I had been using anyway).

Just a quick one as well. The Sticker is a crosshairs icon not a Mk2 icon (though given how much IO stuck that sticker everywhere easy to think it is that)

I wonder if IO will ever make it possible to unlock that black winter suit in hitman 3.

to unlock that black winter suit in hitman 3.

Chances are no, similar to the ICA Coins it was a thank you gift from IO to early adopters of the WoA Trilogy. While they were more liberal with who got the Black Winter Suit since the criteria was for first run H2016 ET and Second Run as well, but it was always meant to be exclusive.

I think it’s best to keep the ICA Coins and BWS exclusive and very limited because of how they were obtained. Special Reward for the people who arrived early.

Objectively speaking the Black Winter Suit is the rarest suit in HITMAN 3. Since it was unlocked for all players who successfully completed any Elusive Target contracts in HITMAN™ for HITMAN 2 and the only way to get it in HITMAN 3 was to progression transfer a save that had it on HITMAN 2.

The coins I get…to an extent but I honestly detest locking rewards away behind timed setups and going “Well should of played earlier” as a reason to lock away Outfits and alike. There really is no real reason for this. At this point could still keep as an unlock for early adopters and then as a hard unlock for newcomers or missed out last time (Though should also be a discussion on making sure those unlocks can still be there after ET runs end or those who failed a few).

These are all 47’s suit from the games! 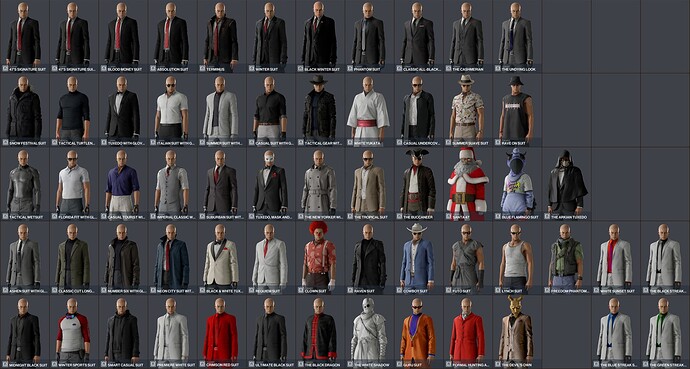 With the signature suit with gloves, absolution and winter suit being unlocked via Elusive targets, I would say they’re definitely three of the rarest suits from the game.

The requiem suit is another rare suit for 47.

Yeah but its nearly identifcal to the winter suit just black. It was made as a sort of way of making up for players having to reunlock everything in my opinion

Still a suit even with slight differences and additions is an unlock what is with-held. Again can be a fun easy unlock for those who did transfer progress and had to redo the unlocks and make for a challenge for those starting afresh else where.

As much as it is rewarding those who played Hitman 1 back in it’s hayday it is also ultimately a punishment for those who missed out depending on a number of factors.

Just add as fear of being too negative. There are things about live service models what work like adding new unlocks (Quite enjoy the ET and FC unlocks) and content over time and keeps it all bit fresh but gating keeping unlockables because they weren’t playing at a certain time or failed a few conditions just generates undue FOMO and needless grief (Especially those who do like to collect).

Players had between May 2016 to October 2018 to unlock the Black Winter Suit compared to the more niche timeframe that the ICA Coins had.

I don’t see IO going back on their decision especially since it was one of the pieces of marketing IO did with HITMAN 2 for returning players. 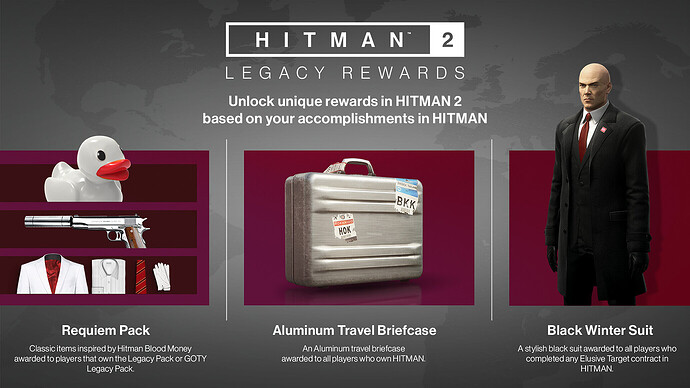 You and other people may not like it, but not everything in this trilogy was meant to be obtainable to everyone. This series has always rewarded the most dedicated of players that could range from the coveted silent assassin rank in older titles to the limited time unlockables that are apart of this live service model

People still have the opportunity to unlock the base winter suit, but they can’t unlock the one designated for achievements that others made back in 2016 for trusting their idea when the series was episodic.