Should ghost mode be reinstated in Hitman 3?

Though I realise that it is highly unlikely that IOI will ever bring it back, I’ve found myself missing ghost mode. It seems that IO are moving their resources away from Hitman, and they have already stated that there will be no multiplayer mode in the trilogy’s final instalment.

However, purely out of interest, would you like to see ghost mode reinstated in Hitman 3?

Secondly, do you consider it possible that IO Interactive will ever add ghost mode to the game?

If you voted yes, would the reinstated mode feature just the original two maps from Hitman 2, or would they adapt Hitman 3 maps for it?

I’m certainly not holding my hopes up for this, but there’s always a chance it could be reintroduced. Perhaps to fill the empty space in a roadmap?

Hard for me to vote beyond first poll as the hope is always there but I have no faith in it will ever happen.
Though I really like Ghost Mode and would like it to be back, as this is the thing that you can play whenever you want and it won’t bore you. But just playing singleplayer for countless time everyday is boring, because there is everything the same. Ghost Mode will never be the same because you play against a live person and he always acts differently

It’d be quite easy to implement (atleast when the game comes on steam), as everything for it is still there. Personally would rather not have it just because it wasn’t very enjoyable to me atleast.

I think the concept is there but would need to expanded on quite abit to be a proper release and not a beta but the additional service resources and development costs would likely make it not happen.

I have no faith in it will ever happen.

At least not by IO. But again, there is some incredible progress being made by the modding community.
I could absolutely see GM get a H3 port when the game comes to Steam.

And with some of the tools that are being developed, not only could GM get more levels, it could also very well have expanded/improved mechanics and features as well.

If you are looking for a better Hitman experience, I’ve found it’s much better to look towards the modding community than IO, as modders will not run out of love, patience, or effort for this game.

This all good, but as these implementations are not official there are not a lot of people playing it as not much might even know about it. Not even saying about proper installation.
I myself know that GM still exists, but I don’t know where to get it and how to install it.
Some time ago somebody gave me a link to it, but I understood almost nothing of how to install it despite I’m not a complete noob in PC things

Open it, select a server and start Hitman 2. 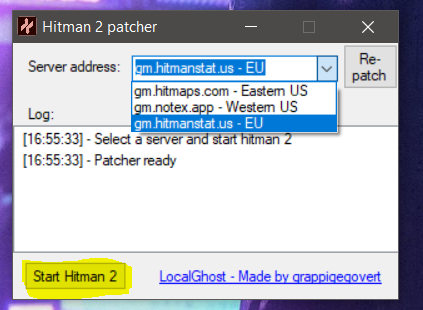 Your opponent need to do the same thing.

Think it’s unlikely, but would be cool if IO could help modders to keep the game alive when the official content releases stop, including with support for Ghost mode.

Matchmaking queues are currently not functional on the community servers. Instead, you will want to find someone to play with ahead of time and use the “Invite Player” function.

There’s a 0% chance of it happening officially but it would be nice. It needed to be developed more and it needed more maps added but they sunset it without doing much with it beside adding Colombia. It wasn’t very popular but maybe it could have gotten more popular if they did more with it. Would have loved to play the mode on the best map, Mumbai.