Some hitman Ideas for a huge update or a new game

I was playing today Hitman and I thought about some animations or some assassination new ideas First I’ll start with the animations: I think it would be cooler if u are bored or so to climb on the roofs because there are lots of roofs in hitman so you don’t have to struggle with some walls to climb on them or to enter more houses rooms than usual what I’m saying is that maybe they could make much rooms available to enter, explore and this would be a hard work I know, that was about the animations. I was thinking about some assassination ideas for mission stories that maybe hitman to manipulate the targets to expose their self if u don’t want to kill them sort of the Dubai mission story (How The Mighty Fall) how Lucas Grey said all the things they made and Hitman (Agent 47) was behind them I know you killed them buy yeah

What in the actual fuck are you talking about!?

This is worse than a little kid trying to tell a story.

“And then we went, because the place where we have the, we like to play, what I was watching because that’s why, so we didn’t go, because and my cup is blue but mom says, and then she didn’t know it, but because of that, and then, and that’s why I got the blue car instead!”

The only thing I could decipher from that giant wall of text was you want a Hitman: Parkour game and you want targets to expose themselves to you. Kinky, but no judgement. 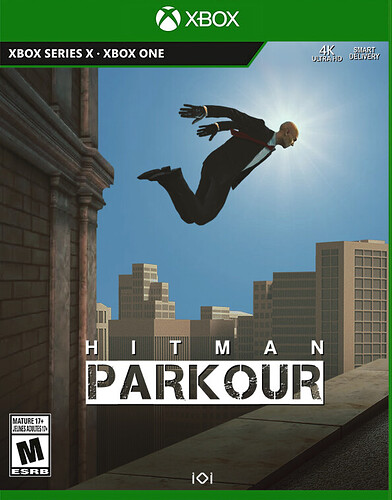 “Hitman: Jump Off a Building and Die”

Had a stroke reading this. Sound like little Timmy at the annual BBQ.

I think he wants more indoor explorable spaces (even though we already have them???). I would rather get some bonus missions for existing levels like in Hitman and Hitman 2. I know Dartmoor garden show exists but I don’t want no escalation, I want a full on bonus missions with mission stories and everything. My only idea is a rock concert in Berlin where you could rig some pyrotechnics or use that Branson MD microphone for an electrical kill (and other kills of course, these 2 are the only ones that I came up with).

You know shit’s serious when 47Agent jumps onto Photoshop again

I think for the next game, Diana’s/The Handler’s voice should come in through the Playstation Controller.

(@Travis_IOI might be a good idea for the James Bond game too).