Since @CHAOS_AGENT_45 got a faster run already. Might as well put mine here.

Cold-Blooded 47 1m11s @Pagan nice contract and I like it！

I watched some of your old videos and I was wondering when you’re going to make videos with featured contracts again.
Looks like I have got the answer.

Congratulations to all who got featured and everyone who submited !!!
I am so grateful to be a part of the selection for the 3rd time (4th counting Santa:p)
and even if my contract is not that good , it reminds me the first time I submitted a contract here back in April19 hoping to be lucky enough

The ‘‘Ghost Twins’’ made it

this is what I meant by this…

Pretty much a linear contract this one with 2 targets requiring some tricks as they need to be Axed at a crowded place.Agents might learn how to make one of them go at Battys place

Hello! Thanks for the contract. I have to confess I was stumped by it so looked to you for inspiration. I had Andrea sorted out but didn’t realise the emetic thing was going to work through that gate to see what Delgado did. Anyway, I keep getting explosion kills not fire kills from the petrol thing - do you have any idea what that might be?

Yes, that kinda happens sometimes, it’s because he gets on fire, but it takes some time for the flames to kill him, so the explosion kills him first. Try using a remote taser on the gasoline, gl!

May i suggest that next themes should be a little more “in game” related, just to get a better idea about what to do, for example: “Bad cop” theme, you have to either dress as a cop or kill a bunch of cops, or “fiber wire only” theme, things like that

They already did the fibre wire one, it was the first batch of featured contracts, and if I recall correctly it was quite badly received because of the lack of freedom it gave to contract creators.Personally I liked it though.

Thanks. I was using the remote taser. I got there on about the tenth attempt, for some reason he died immediately (as a fire kill) when I activated the taser on that occasion. All other times he was on fire then the explosion happened before he died. I am not sure what I did, though. Oh, well . . . cheers!

How I happened to finish “They Scream for Ice Cream” (SA) 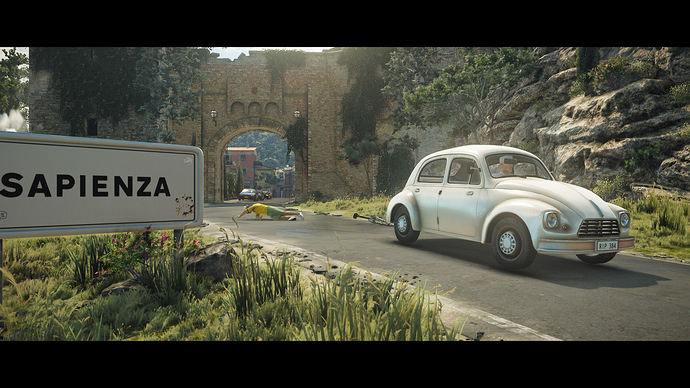 As far as the objectives go, this looked the best out of all the contracts; although the timer didn’t make much of a difference, and considering the amount of stairs where the targets are it should have probably been thrown kitchen knife instead of melee (Alternatively IO could make it so you can melee people on stairs, not karate chop them?). Also it turns out there’s an invisible wall underneath a section of stairs, so when I quickly threw my knife as a distraction to stop the dishwasher from going outside, I was unable to pick it back up and had to reset unless I wanted a rather long run.

The best out of the ones I’ve played so far, but I honestly don’t think I’m going to play even half of them; I know what type of contracts I like, and this batch just isn’t for me. Hopefully Curated is better

And where are the reviews?

I think that’s the first time I’ve got the Kevin Rudd seal of approval. Glad it’s your favorite.

I want to tell you this is my favourite contract too so far,but I am pretty sure I won’t change my mind.Will share a video later with videos for other contracts too.

At least running over that bloke doesn’t count as a non-target kill any longer. I agree about the getting targets on stairs BUT given the bodies need to be hidden it’s faster for them to walk to/by a hiding spot and kill them near it than drag them after killing on any stairs.

@Pootis.exe (Sorry,but I have been busy recently.)
My favourite contract from this batch.A really good puzzle.I know you said that there are not any crates nearby except the freezers,but there are upstairs 2.

I am pretty proud that I did not use the report trick. 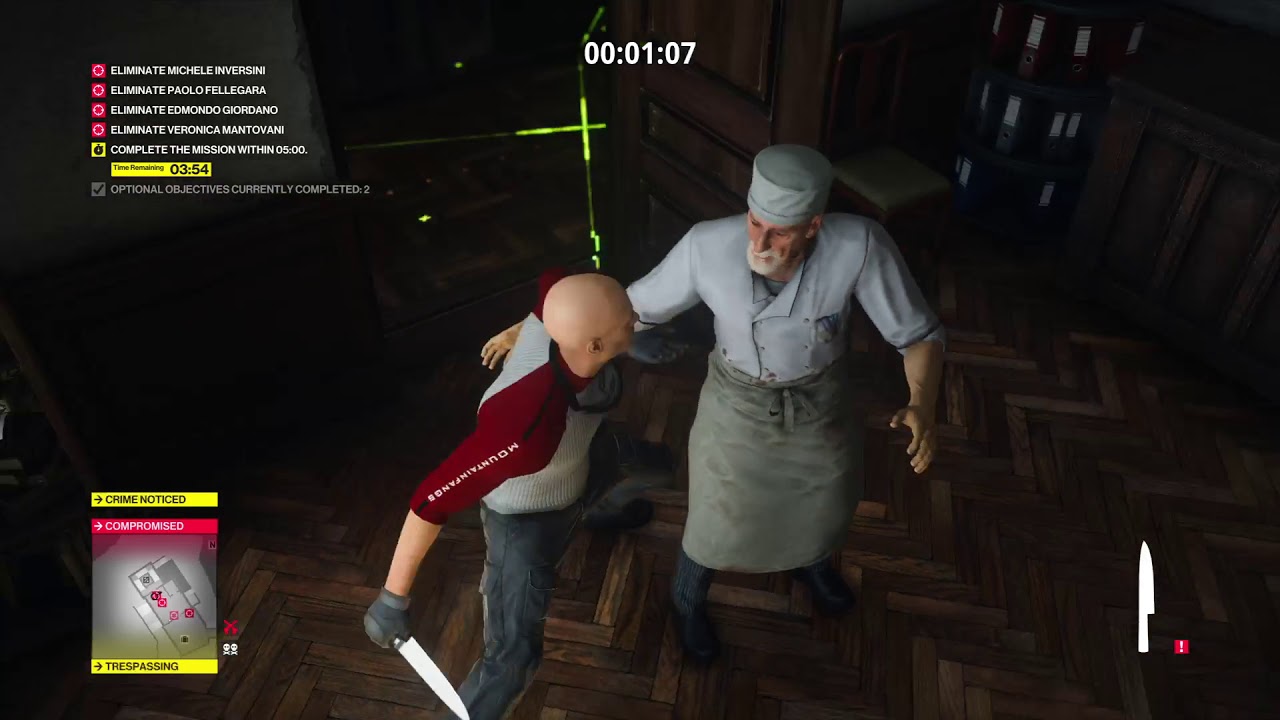 @Parsime
I couldn’t figure out the right spot to shoot the guy in the zone where you go to the action without loosing SA.I am also not good at blowing up cars and I think it would have been better to put “sniper rifle” for that one guy instead of accident.
In the end,I made a strat that also includes sniping from the barge. 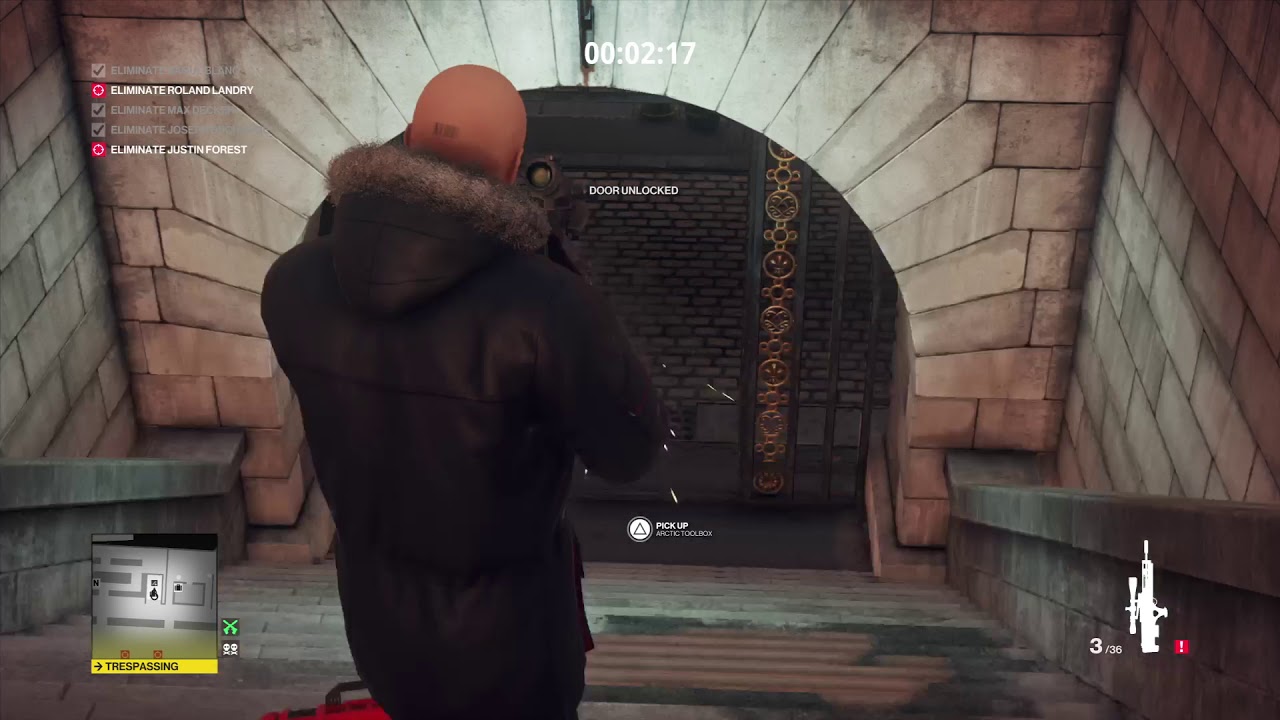 @Atmosphere
I like how mysterious this contract is at the beggining(you don’t know the exit or how the targets look).
I didn’t use the electrocution phone. 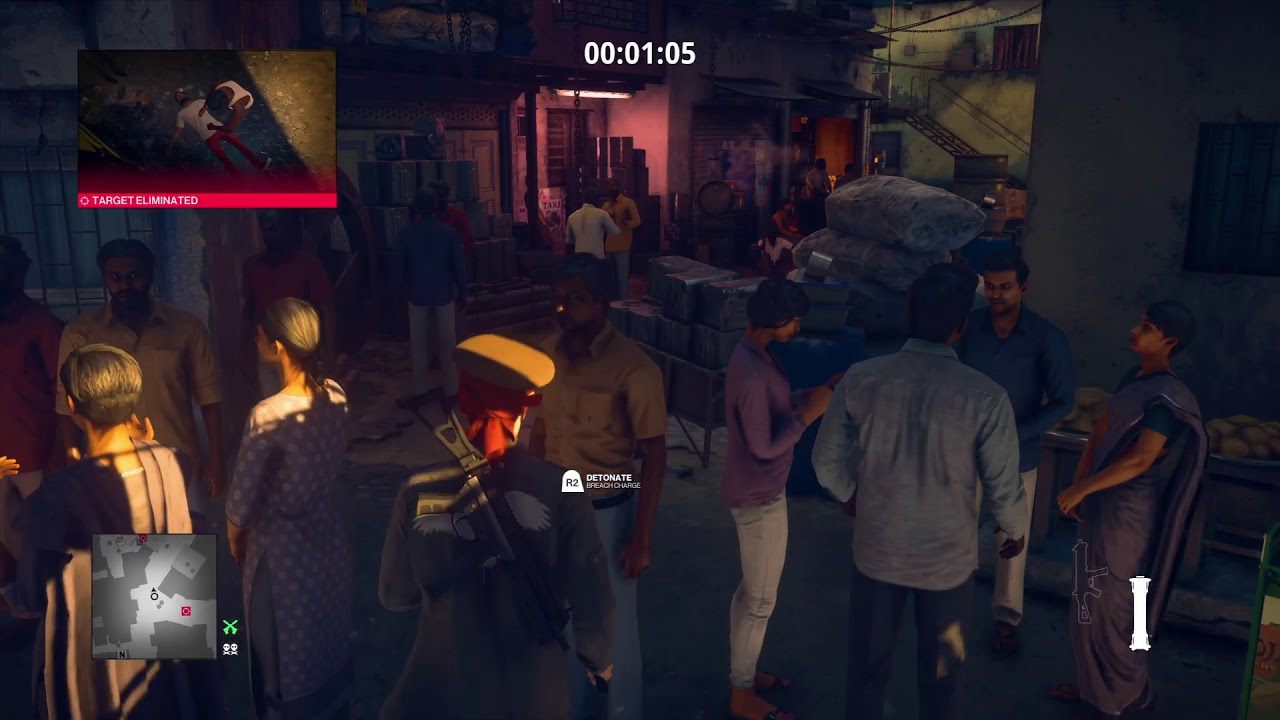 @Pagan
It was time to get a contract featured.I hope you like muffins. 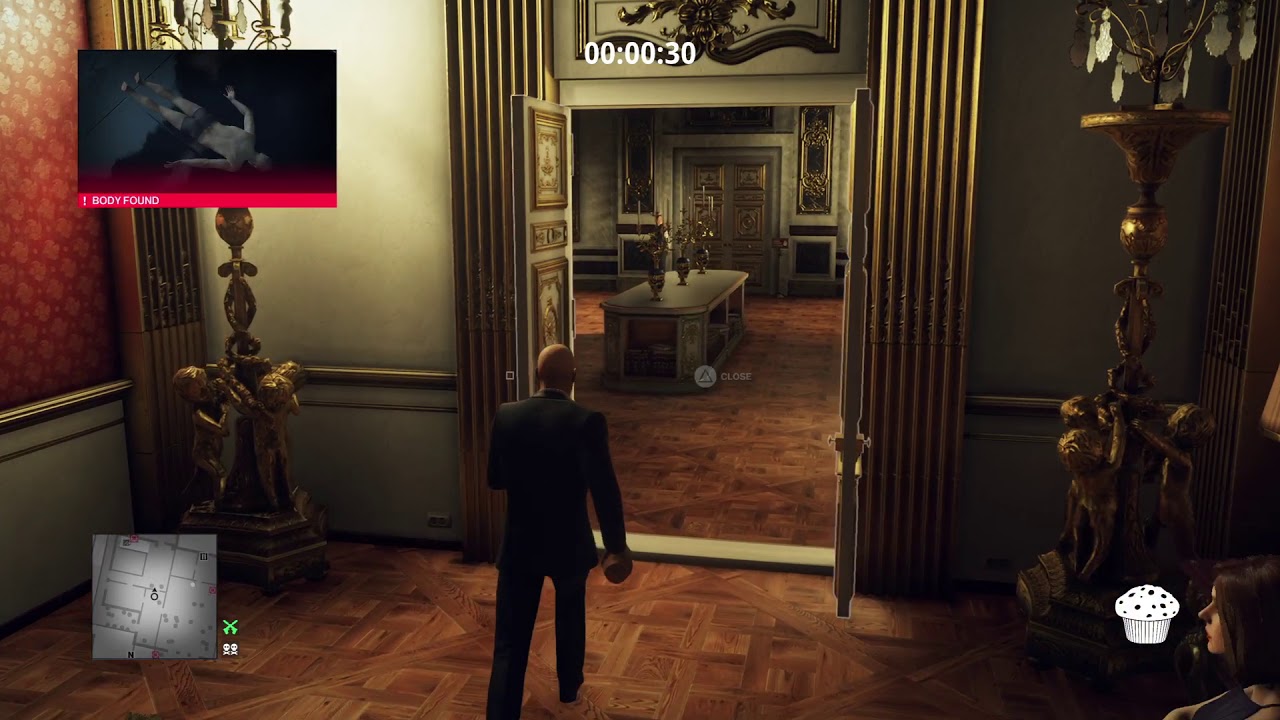 @I_LOVE_WOMBATS
Except the woman in green,the targets were pretty difficult to engage.It looks like you are heard snapping Squirrel’s neck through the wall.I like the New Year’s Eve theme. 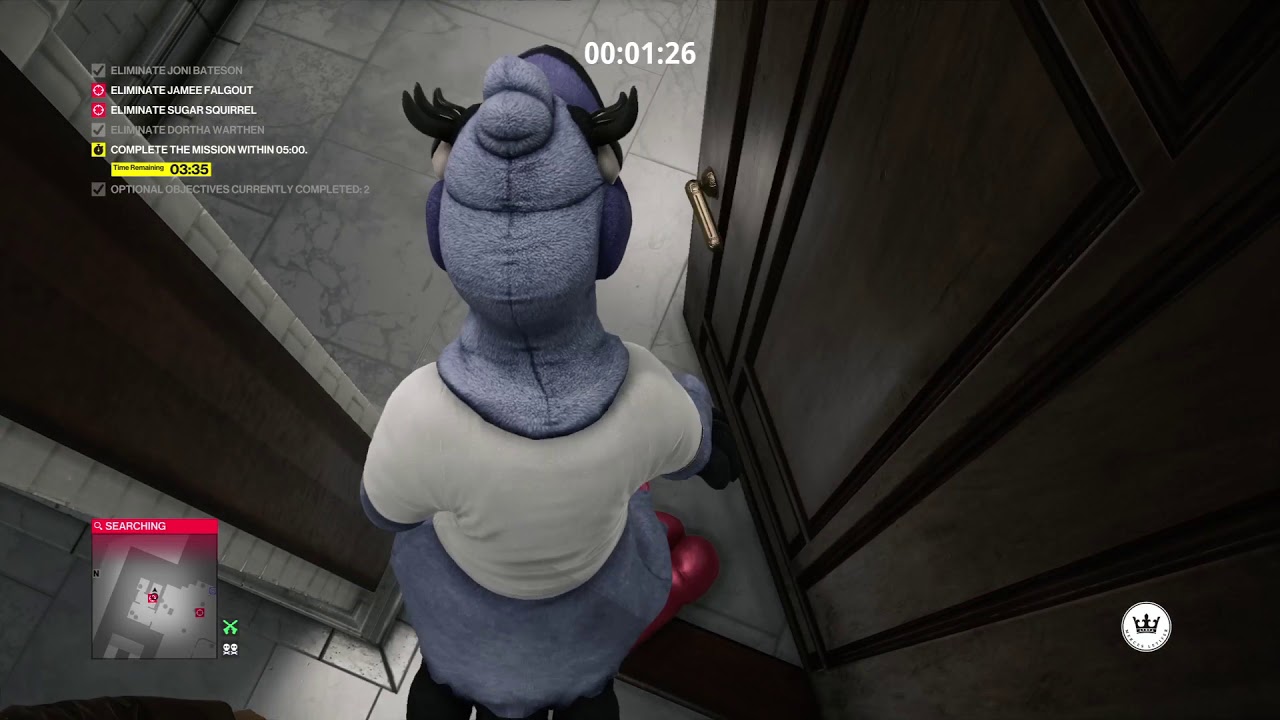 @tryagainlater
You are not a copycat.Your contract is really cool,but I didn’t know about the free thug disguise until watching Euler13’s video. 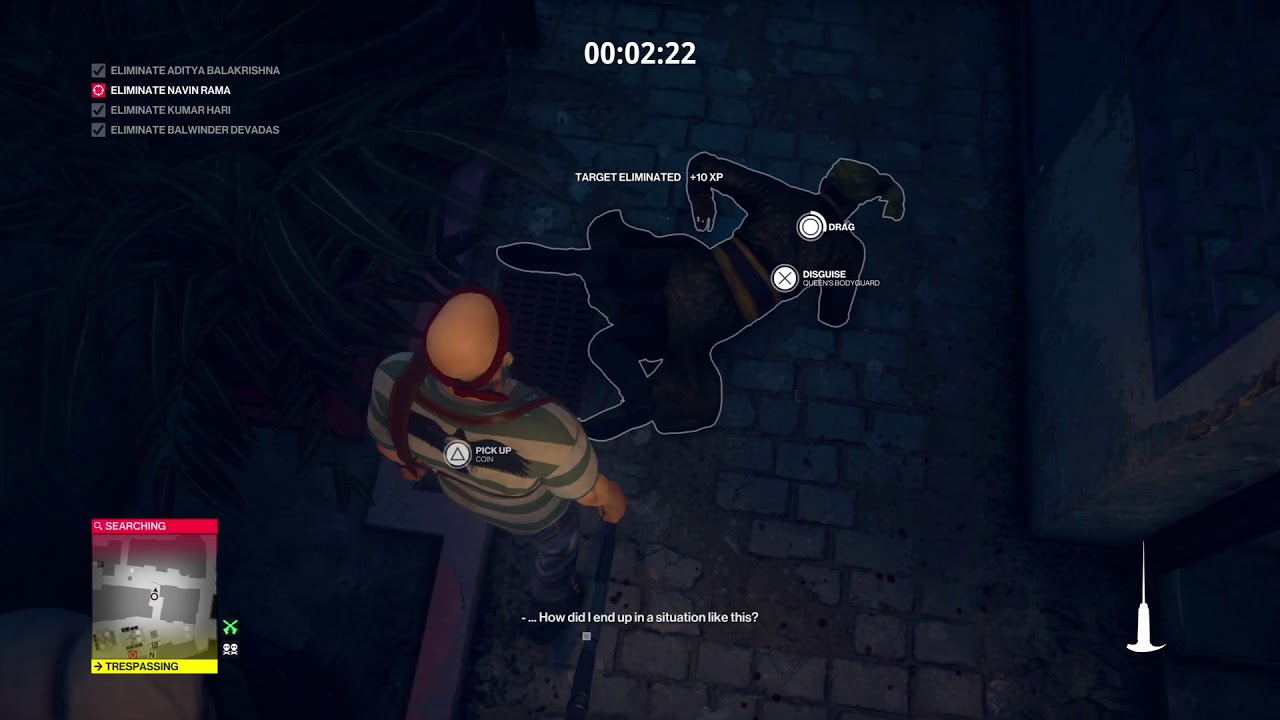 @GreekAgent
It was interesting finding a way to carry the fire axe,but there was a problem with the prompt on the yellow/green woman . 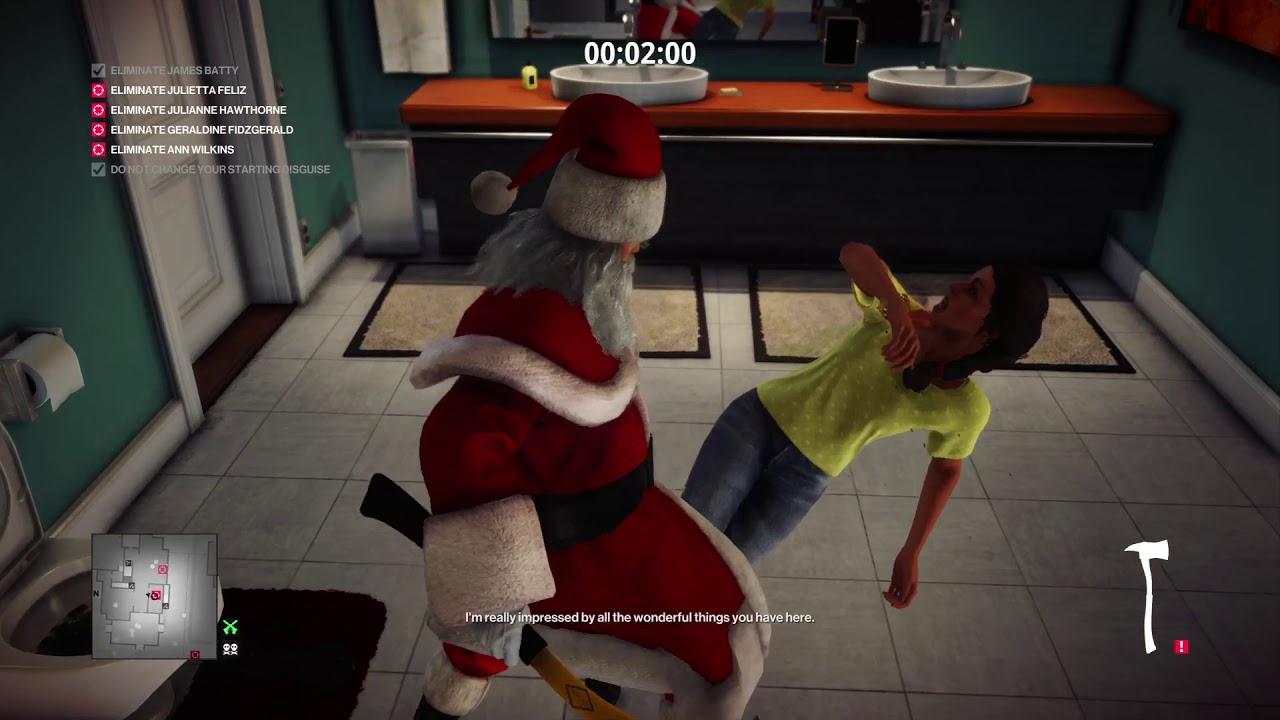 @theWizard
Kronstadt came up with a new mobile app.When you are near coconuts,put some music on your phone and the coconuts are delivered.
It was annoying the required exit.Not everybody snipes. 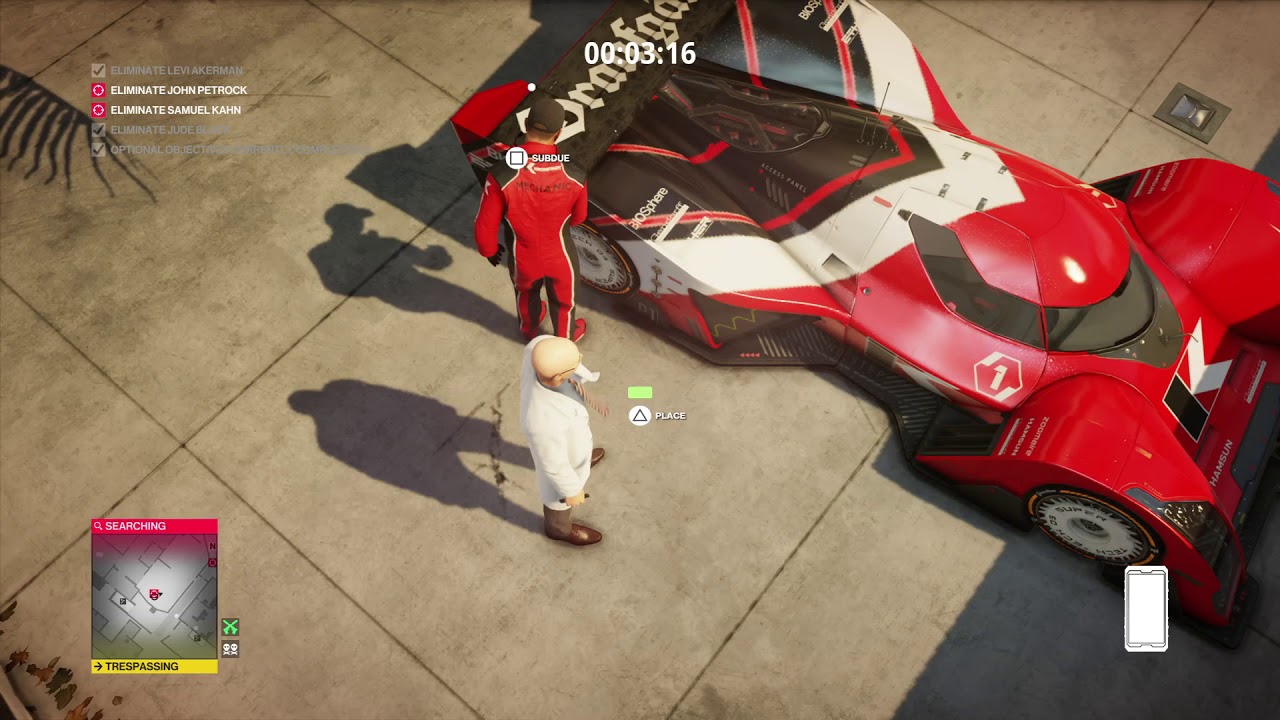 @Weekend
A quite slow run.I like the yoga theme. 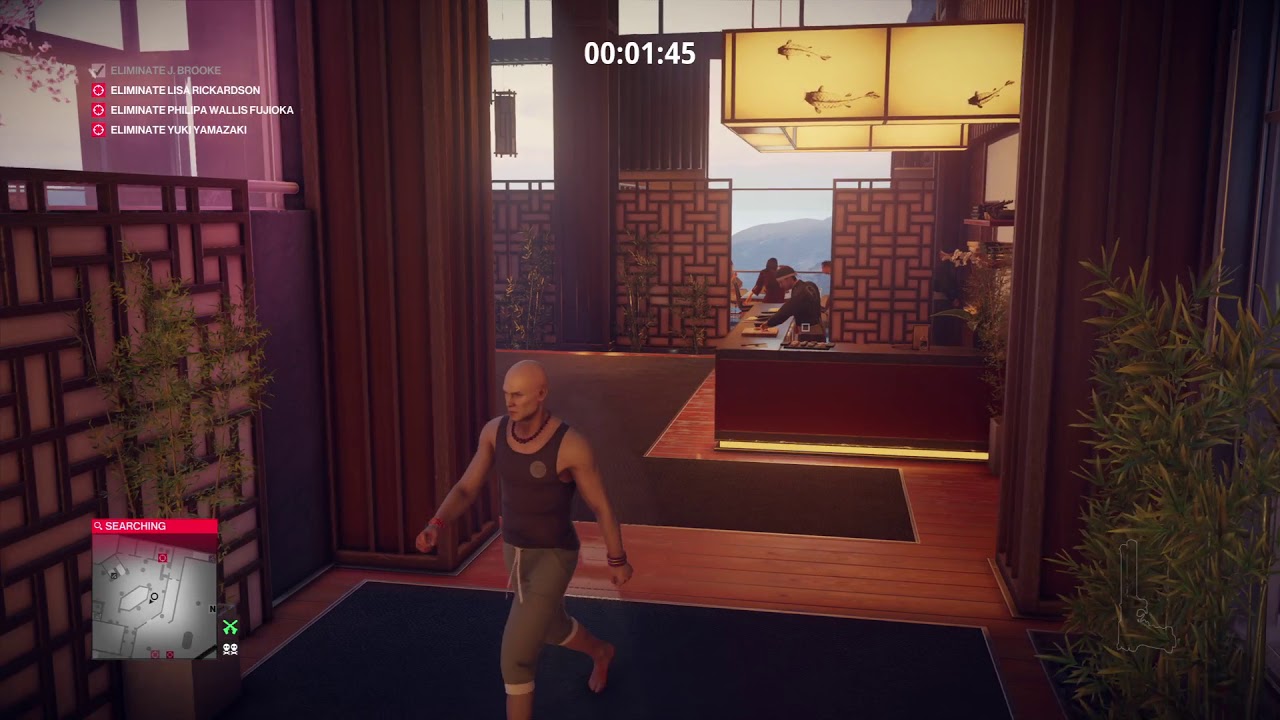 PEA
This contract was uncool.I had problems with a specific ledge.The fuel tanks explode unless you do what Agent420 did.An annoying woman smokes near the barrel.The loadout is resteicted.
Though,unlike another contract from November it wasn’t so annoying. 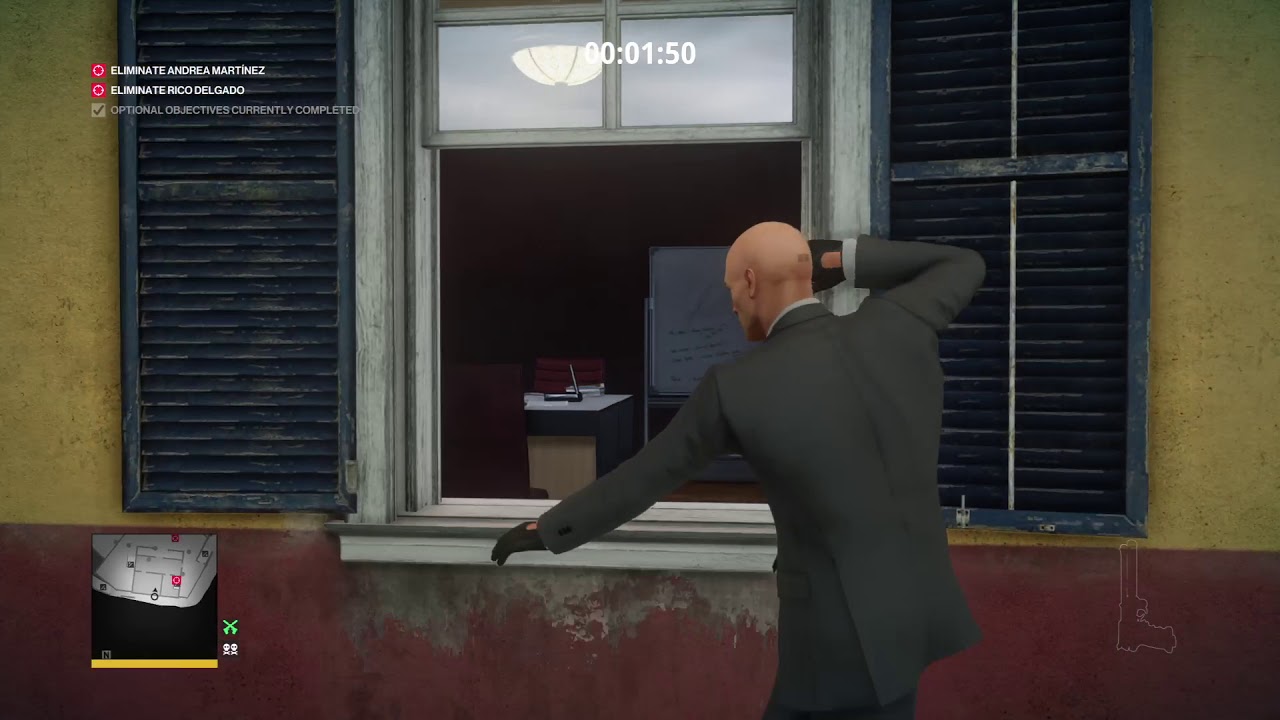 @Euler13 Your videos are cool even though you get dislikes.

@GlogolZ
I don’t like the complication.It should have been optional.You cannot know who had seen you if you failed immediately.
I like the use of the suit,but I don’t understand the Perfect shooter condition.
It was nice to find out I cannot distract the musician.

I think it would have been better to put “sniper rifle” for that one guy instead of accident.

I agree with you.
Here is what I had planned on the contract.