This thread was originally created to host the “DEFINITIVE, COMPLETE Sniper Mission Pack” (below), but now serves as a thread for anyone to post their sniper contracts and playthroughs.

Hey guys, this has been months in the making and I’m happy to finally share it with you all here. I’ve gone through every single level and devised a contract for every single reasonable sniper location in the game (including Legacy) where you can kill 4-5 targets and still get Silent Assassin, all without leaving the sniper spot (apart from escaping, obviously).

They require all the skills you learn in the Sniper Assassin game mode: Bullets to lure targets, bullets to make witnesses look away, bullets to make things leak/explode/cause ‘accidents’ (But unlike Himmelstein, you’re allowed to get body found if it’s an accident in these contracts!).

If only IO allowed you to force players to pick a specific starting location (like Escalations), these contracts would be on another level; but they don’t, so it’s very important you read the briefing for each one so you know where to start and where to go.

All contracts are now on Xbox thanks to @CamTheChest. @TheContractor was gracious enough to recreate all 16 of my PC contracts on PS4 (The guy’s an absolute legend!), so you guys can now play them in all of their glory and see if you can get Silent Assassin! PC players have already had a taste of the first ten when I posted them on Reddit last month. On PC the most popular ones have been “Sniper Mission: Sapienza Square”, “Sniper Ninja” (Speedrunners love that one), and “Sniper Assassin: Sapienza” (Nice easy one to start off with)

It would be awesome if you guys played some and let me know how you went. Some PC players have shown me their runthroughs and I’ve been amazed with the different tactics they’ve used to get Silent Assassin on some missions (Stuff I never even imagined), all using just their rifle and standing at the same single spot.

If you’re hopeless at sniping, I will post a video below explaining everything you need to know about sniper mechanics in Hitman 2, and if you still need help, comment here and I’ll give you a hint (For eg. on the Sgail mission you will need to know about the canon kill)

UPDATE: The February patch (27-02-19) has made it impossible to get cannon kills using just a sniper rifle, meaning “Sniper Assassin: Isle of Sgail” will now have to be SA’d in a different way; but CHAOS_AGENT_45 has shown us it can be done very easily

Here are the contract IDs typed out -

And here is the video on how to get Silent Assassin in sniping (Please note it will spoil “Sniper Mission: Sapienza Square” if you watch past the 2:42 mark) https://www.youtube.com/watch?v=sI5OsXWFx6M

Thanks mate, this is actually great. I seriously struggle to find any fun contracts other than a few featured ones so this will keep me busy for a while. Much love

Another great deliver by Australia’s strangest PM. Thanks!

Cheers, let me know if they lived up to your expectations, and if you had any issues!

Oh you have a HF acount? for anyone reading this i can definetly recomend these they are really fun to figure out and most targets have more than 1 way to complete them

Just got one a day or so ago, thought it was time!

And yeah, on the rare chance you’re referring to my post from a month ago, I have since expanded it from 8 to 16, so let me know how you go on the new ones

Such a great idea! Thanks!

You can now play all contracts on Xbox!!!

Nice contracts, the problem is Sniper works different in Sniper assassin mode, in normal mode you can’t lure people properly without them getting suspicious, sometimes they don’t even go to see it, or just start running, it’s really annoying.

This is true, but I’ve specifically picked targets that can be lured with just the one shot (including one shot + a car alarm, which does not count as a second shot). There is only one target in all of these contracts which has to be put into “Searching” mode to be lured away, and that is in Sniper Assassin: Paris, and I’ve replicated it multiple times and it can be done if you’re patient and wait for him to slowly explore the area and go behind cover.

And a BONUS of having different rules to the Sniper Assassin game mode is bodies are allowed to be found from accidents, which is a huge positive.

I did Paris and completely forgot I could lure them with the alarm, this will make it much less painful

You can do Paris without an alarm by waiting aaaaages for the waiter to walk away to a secluded spot, but yeah… shooting the car only takes two shots with Sieger Ghost to explode, and the first shot is usually the luring shot

UPDATE: All contracts are now on Xbox, I have updated the contract ID post up above.

Give me your feedback and feel free to post any playthroughs!

If you’ve aced all 16 and still want more, there is a bonus contract which was not included due to having forced complications (But is still a straightforward Sniper Mission nonetheless, you just have to not be shit)

For those bored and wanting another sniper contract, today I learned of an easter egg that gets you onto the GAMA rooftop, so I made a contract out of it. Read the briefing to figure out how.

If you follow the rules and actually snipe, the mandatory complications won’t be a problem for you, you just have to make sure no one sees the bodies (Remember, there are cameras)! 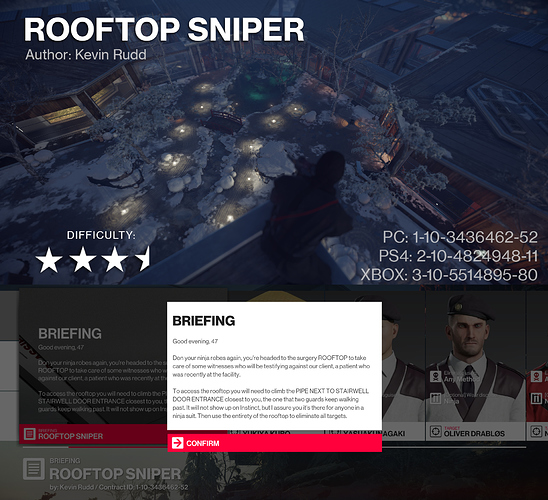 Really enjoying playing these on Xbox! @KevinRudd I thought the school yard one was brilliant as far as distracting 2 of the targets and making use of the environment, despite the fact that the other 3 targets were pretty simple. Landslide was fun, and I still haven’t managed to complete Bangkok or Sgail. Great work!

Really enjoying your contracts, very good mix @KevinRudd
Thanks for recreating all these @TheContractor
More videos will follow