Looks sweet. Will try them all out later.

I saw this on Reddit. I tried the Miami level at one point about last month.

Can’t find a video, but I’ll give you a hint: waiting! 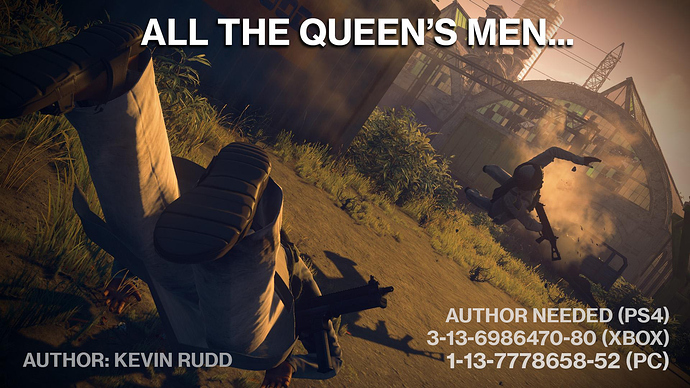 This is a contract that’s MEANT to be passed however you want, any kill method, not specifically a sniper contract. HOWEVER it was made with sniping from the Trainyard Rooftop in mind, so I’ll paste it here.

Hmm, that only happens rarely, usually when the electrician happens to walk by, that just means you had really bad luck/timing! Usually that doesn’t happen once the white clothes lady’s out of the way.

So part of it is luck, but when I’ve played it on my PC it only ever gets the electrician or a crowd member in the explosion like 20% of the time once the food vendor lady is gone 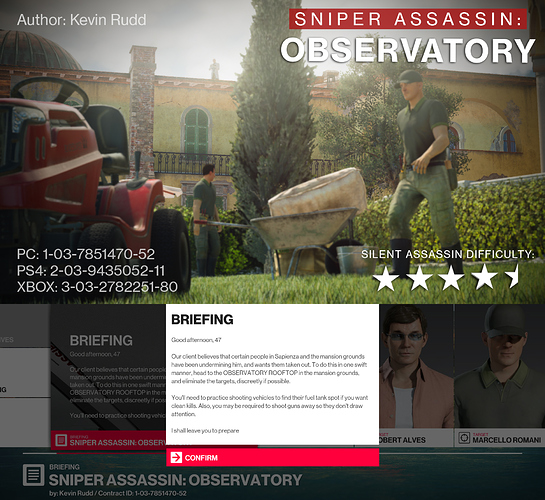 Observ.jpg1920×1760 1.47 MB
Hello friends, inspired by Salem, I decided to go back through the maps and see if there was any potential sniper spots I missed, and turns out there was! So far I’ve only re-looked at Sapienza, I haven’t had a look at the other maps.

This is probably in the top three toughest sniper contracts I’ve come up with, in my opinion. So tough that I decided to put in some major clues in the briefing. If you’re not an expert sniper, then you must read the briefing! There are no ‘easy’ targets, and one target in particular is really hard and will require you to shoot off like 6 rounds so his body isn’t found, so be careful with your ammo.

People are probably gonna miss this because I’m posting it just hours before the featured contracts go up, but I’m actually rather proud of it.

Awesome man, one of your best yet! I have to say I had more fun with this contract today than 4 of the 5 featured contracts

I didn’t have too hard a time with it, but that’s probably because I spent hours myself sniping from that damn observatory looking for targets when I created “High Time.” For some reason I especially enjoyed the guard target, that staircase was too perfect a hiding spot, I loved it; and because I tried not to read the briefing, it took me some time to realize why his body was being found. Keep up the great work! Here’s to hoping there’s a sniper related submission theme in the future, I’ve got a couple up my sleeve as well!

Thank you so much for saying (and playing)! Glad at least some people are playing it, was worried it would be drowned out by the Featured Contracts being released.

As for everyone else, 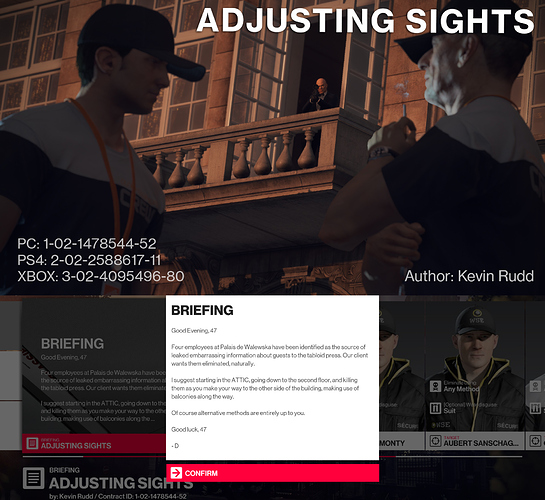 Technically this contract is encouraged to be completed in whatever way you like, but it just so happened I made it so it can definitely be completed Sniper style, so I’m posting it here. Reading the briefing will let you know where to go if you intend to do the sniper method. I’m curious what sort of SA time you can come up with if you opt not to do the sniper method. 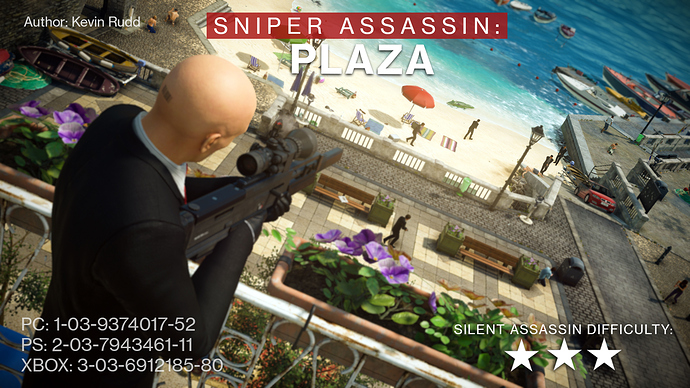 I don’t know how many more of these I can make, but I’m going to find out because to me it’s more fun than trying to get every last tedious challenge in the main missions.

Anyway, start at the ICA SAFEHOUSE then go out the back door, it’s intended that you go down the little side alley thing to the neighbouring apartment , which has a big balcony for you to snipe from (Directions also in Briefing). If you can snipe all targets from the Safehouse rooftop itself then more power to you, but there’s at least one target that would be hard to kill from that angle. I’ve made optional no KOs to discourage people from doing this mission ‘on the ground’.

This one’s not as hard as Observatory, but certainly not easy; one of the targets may involve a bit of luck.

Been a while since we’ve posted here, but here is my obligatory sniper contract on the new map 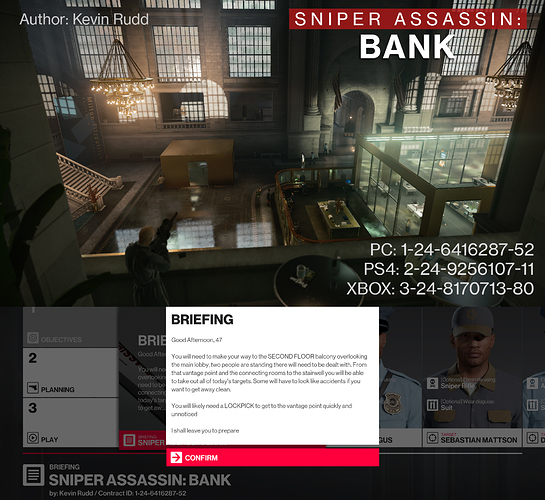 Sniper Bank.jpg1920×1760 905 KB
You will need to knock two NPCs out to use the sniper spot. Also one of the kills will require you to shoot them at the best angle you can, otherwise you’ll have to shoot their feet out of sight when they fall down!

You actually need to move between three connected rooms to get all targets (Assuming you don’t cheat and just taser one of the guards, and electrocute phone one of the civvies, and tranq bug kill another), but they’re only metres apart from each other so it’s basically one sniper spot.

It’s not the best of my sniper series, but I challenge anyone to come up with a better sniper mission for this map

As usual I’m in the process of coming up with a thoughtful sniper contract on the new map; but as far as the Radio Tower is concerned you don’t have a view of too many good targets (And most of them are clumped at the Villa and Private island).

So my question is do you think it’s fair to include a target who can only be SA-killed by a legshot in the water?

Do you think it’s fair to include a target who can only be SA-killed by a legshot in the water?

Is the kill consistent? I don’t see the problem, as long as the target will consistently fall in with any sniper rifle.

It has to be a weak sniper rifle, so no Sieger Ghost or rifles with Piercing ability.

It’s alright, I decided to just pick normal-style targets that are all in the same area. Contract will be coming after it’s recreated on console!

Alright, here’s the best I could come up with for Haven Island without having to resort (pardon the pun) to legshots in water 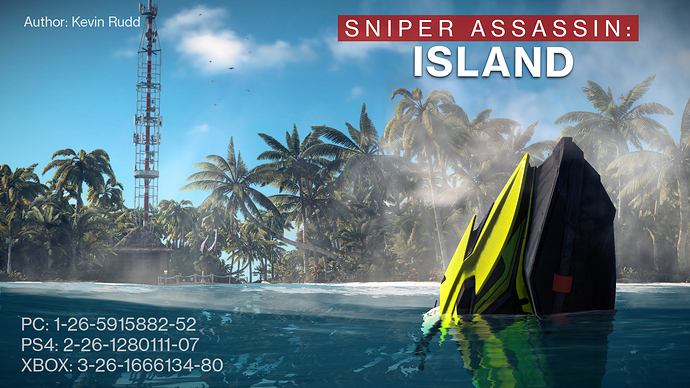 Sniper Promo.jpg1920×1080 980 KB
So far the only other sniper contracts I’ve seen on the map on PC were not possible to get SA on from their suggested sniper nest (The tower), definitely not without using the legshot-trick on like three targets. Whereas this contract is about lures, distractions, accuracy and accidents, all with your rifle.

Always so jealous of your screenshots!