You climb up a pipe on the side of the building that’s facing the ninja starting point up the mountain side. I think you might need to be dressed as the ninja to get up though. (not sure about that but I remember doing it as the ninja once) 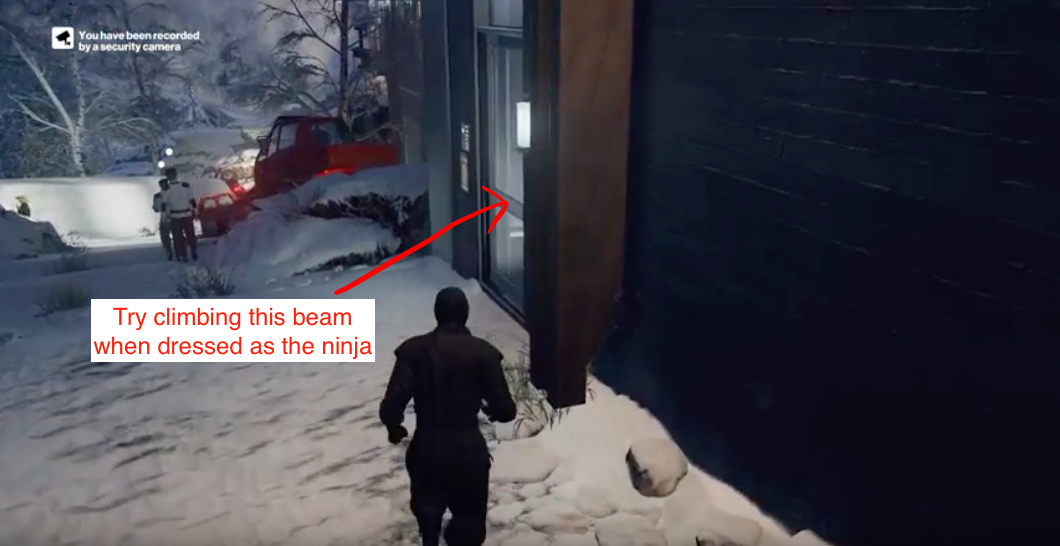 Cheers, I never knew how to to it for all this time

Due to the new patch, it is harder to complete Sgail in Silent Assassin, as you can no longer shoot the canon. However I’ve just learned of a new way! Try your best!

It’s all in the briefing; hopefully people can figure it out from what I wrote, otherwise there’s a lot of people who will have no idea how to even play the contract :S

Holy crap, you’re amazing! Can’t believe I’ve never thought of that, I thought shooting into the phoenix automatically ignites it. Thank you so much, now it’s still possible!

Pity the play counts are so low on PS4, I thought the contracts were decent tbh. They’re definitely more popular on PC.

Interesting! I never would have thought of the cannon before the patch anyway - it’s too bad it affected your contract, but I agree with the fact they changed it because logically it made no sense - anyways, my best guess was to lure him up to the top of the stairs and try to conceal the way his body falls, but after seeing @CHAOS_AGENT_45’s run I’m amazed!

Late to the party on these, only saw them today; props for making some good content on a currently quite broken game, and getting it over to all platforms.

Not the tightest run, however I had a fun time working this for the Fishing Village so thought I’d post it up; will try a few more over the weekend.

That’s not quite how it was intended to be played, but glad you had fun

There might have been mention of a prepared balcony, but I thought that was optional; tbh briefings get skimmed over at best these days.

Ah well, I’ll keep an eye on them for the rest of the series.

All good, usually speedrunners find a way to ‘cheat’ to get better times. I’ve even done it a couple times myself so my leaderboard ranking catches up to these guys.

But yeah, in general the premise is you can just go to one location and kill all the targets, no need for running around or using gadgets.

I am absolutley atrociois with snipers most of the time, but I’ll happily put myself up for a little challenge! Anyway, that’ll be a couple more runs on PS4 for you eh?

My bad, I should have paid more attention; I’m more for freedom of expression than restrictions.

So long as you’re having fun!

Aye, that can be difficult with this game in its current state…

I’ll mooch off this thread to plug a couple of potentially interesting sniper contracts on Xbox in case anyone is looking for more, I’d love to see these recreated on PC and PS4!
The first is one I created in H2016: 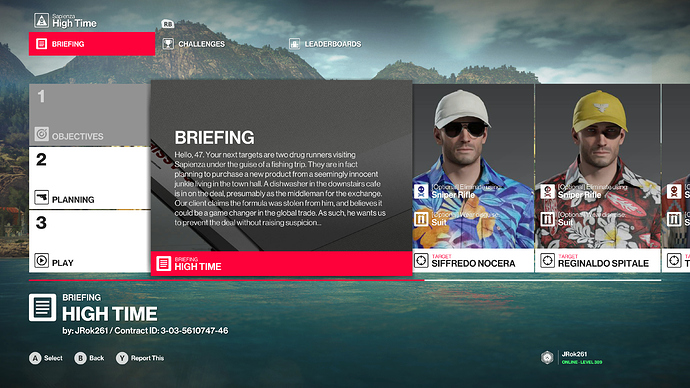 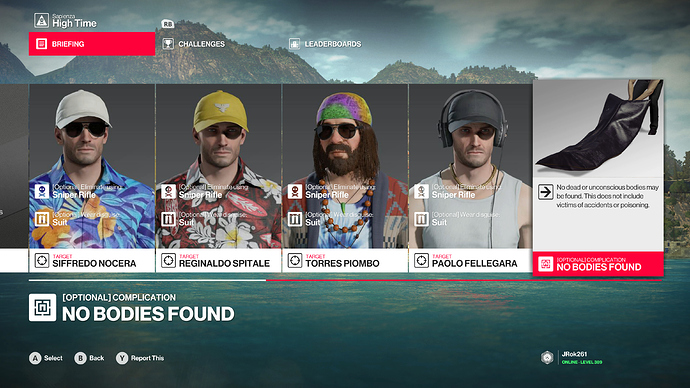 The second is one posted by @TheBored23 to the February featured contracts thread, whose post I will link here. For what it’s worth I think his was criminally overlooked, seeing as it has only 2 completions. Super creative title and description and fun contract.

If anyone finds these on PC let me know!

What is the sniper location of the first one? Rocco’s apartment?

Half the fun is in figuring it out! But I will say that there isn’t one specific perch to hit every target at once. If you must know, the best sightlines are in the mansion - I created it with the intent of sniping the two on the pier from the railing outside the observatory, and the two in the town hall from the roof above de Santis’s office, but there are faster ways without so much vertical movement, I’ve completed it really quickly by aiming from the area around the kitchen and railing where the chef goes to take a phone call. Have fun!

@_jrok - Again, not the best run - clipping on walls is never the best

- but here’s something for High Time. Nice contract.

Finally have got the time to play through these now. Very excited

Edit: Got myself a few high scores on ps4 but am finding Marrakesh very difficult