Man… This took me billions of restarts and still situation went wrong off my plan.
But it worked, so I’m nearly satisfied

Thank you for mentioning this thing. I’ve been looking the right word for it for quite a while

Mate, you play ghost mode with me since 1 year and we are friends on steam xD PC of course.

But you can also own a console on the side, can’t you?

With two accounts level 886 ? I don’t have time to do that

Who knows, who knows

I didn’t pay attention to the level. To be honest, I didn’t watch things after you quit the mission 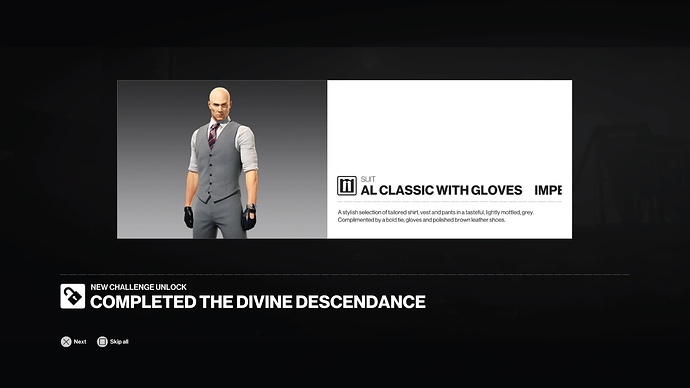 Not a bad escalation really, guess they tried to make it tricky with the non silenced firearm kill. Suit looks sharp too!

This was sort of interesting. As seems to be the pattern the first two levels were just warm-ups that were no different to a custom contract; zero challenge from them thanks to the Electro phone.

Level three was simple but challenging. Also I just saw the picture and assumed it said no pacifications, didn’t realise 'til after several tries that I was allowed one. Had to come up with a lot of different strats to find the one that worked, in the end I didn’t need a KO, just a Sieker, an electro phone and a gun.

It’s nice when there’s a challenge, but not because there’s a whole bunch of complications slapped on it, just something you have to have a think about and plan for.

Still though, even level 3 was essentially a custom contract that just specified an unsilenced weapon (Something we should be allowed to specify in custom contracts to begin with). Am I the only one who thinks Season 1 was better at bothering to come up with complications? NPC replacement, Extra guards, have to hack a laptop for 15 seconds, retrieve item, kill streak, Wild card (Changing item, objective and target placement), even bloody tripmines… It’s like this year they’re just going “hmm, what’s in contracts mode already, let’s just do that”

The driving gloves really do look awful on this outfit. They should have given it the Kashmerian’s gloves.

But Kashmerian ones are also driving gloves. And ones with even more holes. They also clip a lot. I just wish that the gloves we got were brown.

Yeah, I know they’re driving gloves. But they’re brown. That’s why I want them.

But they have holes on knuckels.

Again, I know. They can leave that (they appear on IRL driving gloves) or just change the originals.

Either way, the black ones look shit.

Started in forge/furnace, smuggled kruger in shoe-shop, brought Stiker. Subdued guard by light and alley. Shot powerstrip and turned off lights for the target to kill himself. Then waited for the main target to get by the back of the tailors. Tossed coin in that outhouse thing. Shot him with Striker into the hole, exited by boat. +5 minutes. 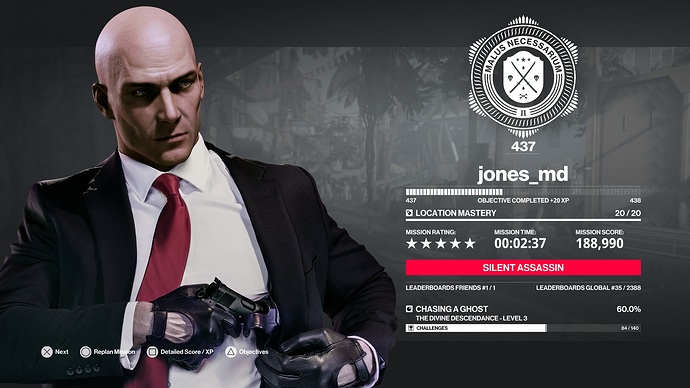 A really well done escalation. Brought El Matador and grabbed the battery, which I carefully threw on a puddle on the first target’s path. I ran for the Holy Man and lured him inside a house (probably the one people are mentioning here) and shot him. Then I left immediately.

I also discovered an interesting bug on my previous run.

I never would’ve imagined shooting the guy with a loud gun nowhere near a place to hide his body. It short-circuits my synapses (not literally tho). Yet, I guess a small room is temporarily “hidden”… `Just gotta pray all the way to the exit before nearby guards make a bee-line towards the noise.

If you’re referring to my method, then I was taking advantage of the broken sound planes that exists on many of these maps. I noticed when trying to attract him into that room that he didn’t respond if I threw an object away from the doorway; nor did anyone else. I discovered that as long as you’re a short distance into the room then sound does not travel to the outside area. There is a very fine boundary near the exterior wall from which sound does travel to the outside and I used that part to attract him in. Then when he was inside the room I stepped away from that line and the gunshot could not be heard outside.