I thought it might be fun to have a place to share and discuss historical subjects, modern or otherwise. I didn’t see another thread like this, but I can remove it if it proves useless.

Anyways, this was prompted because I spent part of last night reading about the 1962 Alcatraz escape. Three prisoners, Frank Morris and John and Clarence Anglin, escaped by widening the ventilation grates in their cells and constructing a rubber raft from dozens of raincoats. It was assumed that they had been trying to make it to Angel Island two miles north of the prison, as a paddle and some personal effects wrapped in plastic were found just off the island’s shore. There were also traces of the raincoat raft found nearby the Golden Gate Bridge.

Despite never locating any bodies, the FBI speculated that the men had drowned. However, this idea has been contested in the years since the escape. Later on that year, another inmate named John Paul Scott was found unconscious on the shore by the Golden Gate Bridge after swimming from the prison island using some rubber gloves he had blown up to use as floatation devices. Having been exposed to the water’s low temperatures for such an extended period of time and with no raft, he had become hypothermic and was treated at the hospital before being returned to Alcatraz. Despite his ultimate failure, he had proven that it was not impossible for an inmate to reach the shore. Years later, Mythbusters would put the raincoat raft to the test. 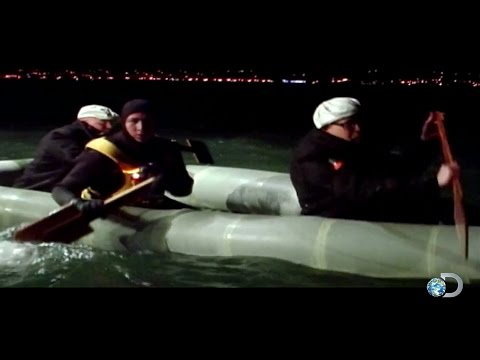 As time passed, evidence began to emerge that the men had indeed survived. A 2015 History Channel documentary revealed that Christmas cards were sent to members of the Anglin family for three years following the escape with handwriting that matched the brothers’. The Anglin brothers’ mother reportedly received flowers every mother’s day until her death in 1973. John and Clarence Anglin were reportedly spotted by an old friend in Brazil, which the FBI investigated but found “no direct evidence” of the two being present in the region. However, a photograph was produced by a family friend of what appeared to be the two brothers in Rio de Janeiro in 1975. The photograph was examined by the U.S. Marshall’s office, where it was ruled inconclusive but unlikely to be the brothers. In 2020, Irish AI specialists used facial recognition software to examine the photographs and determined that the men in the photograph were the Anglin brothers.

So what happened to the only men to possibly ever escape from Alcatraz?

In 2018, the FBI confirmed the existence of a letter, allegedly written by John Anglin and received by the San Francisco Police Department in 2013. The writer asserted that Frank Morris died in 2008 and was buried in Alexandria under a different name, and Clarence Anglin died in 2011. His purpose in writing the letter, he said, was to negotiate his surrender in exchange for medical treatment of his cancer. The letter’s authenticity was deemed inconclusive.

A fascinating post, most especially since just yesterday, after having watched the season 2 episodes of the Blacklist that dealt with taking over a prison, I wanted to research the ten most difficult prisons to escape from in the world, and Alcatraz, with it’s few escape attempts and even fewer “successes” as listed at number 2. By name alone, Alcatraz is probably the most famous prison in the world, and the idea of hosting a prison on an island is a good idea. They just needed a bigger island so that it wouldn’t be so close to the salt water, which did the facility’s metal and concrete structure no favors.

If anyone wanted to know, ADX Florence in Colorado was number 1, and yeah, you ain’t breaking out of that one without the full military of a small nation attacking it. Only intelligence agencies with Black Site prisons are deeper holes. This is the place where they’re keeping El Chapo, Teddy Kaczynski, the Boston Marathon bombers, and many others who are the worst of the worst among foreign and domestic terrorists, organized crime bosses, and serial killers, when deemed too dangerous to other inmates to be kept anywhere else.