That title is clickbait yo.

So, an interesting question I came up with - what if we create a list of Agency’s clients, the ones, who hired each 47’s hit? It’s really interesting that there are fewer contracts with unknown clients rather than with known. Anyway, let’s get to it.

I wrote this in a rush, so I 100% missed something. Feel free to point out these mistakes if made. If I haven’t finished this when you read this - I will finish it later, sorry…

For now, I think it’s finished, except I misremembered or misinterpreted something. Also, a lot of ETs are still yet to be included. Enjoy!

For Rendezvous in Rotterdam, I believe the incriminating photos were of the mayor of Rotterdam.

In the briefing for You Better Watch Out, I remember reading it was an aide to Bingham’s father.

For Rendezvous in Rotterdam , I believe the incriminating photos were of a police officer.

I thought they were photos of the Mayor of Rotterdam?

Watch Out is correct since the game heavily implies Bingham Sr had his son and Larry Hefner killed.

I said mayor, what are you smoking?

The post is clearly unedited and it clearly says police officer. I swear you can be worse than me sometimes.

To contribute… the Elusive Target “The Paparazzo”

Fun fact: She also use to date Ken “The Brick” Morgan

Also; in Death on the Mississippi, the client is no doubt Leblanc… she even can be heard saying “Finally” when she spots her dead husband… gotta be her for sure!

No I think they imply that certain US government officials hired 47 to kill him as it was the only way they could remove him from office and stop the trafficking ring.

Flatline - someone who doesn’t want the witness to appear in court. I still don’t get who is/are exactly clients for optional targets - same as main targets or what?
A New Life - strange coincidence that another witness lives in California too and is wanted dead. Developers might have planned these two contracts to be from the same person.

The mafia is behind Flatline since all targets appeared to have been mafiosi on the run and I assume their respective bosses put hits on them the moment they dropped off the grid.

Neither contracts are linked by anything more than geography since Sinistra was the head of his own cartel and I think a newsapaper implies a Cuban official hired 47 to kill Vinnie to bury any links the person had to the Sinistra Cartel.

But we all know a secret union of Clara, Agent Smith and Victoria are secretly the ones placing the contracts.

Boy? I am older than you!

Then act your age and read the post again, boy!

I did and I also remember what it originally said.

You know some countries consider gaslighting to be abuse…

I did and I also remember what it originally said

You’re definitely high or something. I never said “police officer”.

You know some countries consider gaslighting to be abuse

Yes, so why are you doing it to me?

The Showstopper: MI6 hired the ICA to eliminate Viktor Novikov and Dalia Margolis to prevent a confidential MI6 NOC list from being leaked out.

World of Tomorrow: An Ether shareholder wanted to prevent the virus from being unleashed on the world and hired the ICA to eliminate Silvio Caruso and Francesca De Santis.

A Gilded Cage: Construction company Hamilton-Lowe hired the ICA to eliminate General Zaydan and Claus Hugo Strandberg to preserve lucrative building contracts with the Moroccan government which would be cancelled if coup d’etat was successful.

The Icon: L’Avventura Pictures, contractually unable to fire him, has hired the ICA to eliminate Dino Bosco before he runs out their funding with his reshoots.

A House Built on Sand: Hamilton-Lowe put hits out on Matthieu Mendola and Kong Two-Kwang to prevent Mendola from leaking out confidential Hamilton-Lowe documents to Kong.

Landslide: Silvio Caruso, either out of revenge for his past bullying or to protect his town from a snake, put the hit out on Marco Abiatti.

The Last Yardbird: Aleksander Kovac wants to eliminate his old friends Dorian Lang, Guillaume Maison and Doris Lee, as well as their bodyguards for some reason, so that he could retrieve the loot he hid together with them years ago.

The Pen and the Sword: Unknown, but most likely an American official or military leader who cannot bear his country losing face put forward the contract on Colonel Jin Noo, Captain Lhom Kwai and Captain Re Thak, as well as the Heavenly Guard soldiers.

Crime and Punishment: Unknown, but likely a Russian mobster or politician wants Roman Khabko and Vitaly Reznikov dead, along with the Siberian Tigers.

Patient Zero: “Locksley” has heard of the death cult Liberation’s plans to spread a deadly virus over the globe and put a hit on all of them to put an end to their plans.

The Sarajevo Six: Taheji Koyama decided to atone for his war crimes by placing contracts on his fellow SS members and finally, himself.

Embrace Of The Serpent: Unknown, likely an environmental agency or celebrity activist placed the hit on Blair Reddington

Illusions Of Grandeur: A past victim of Basil Carnaby seeks his revenge.

All the other non-ET contracts were either directly placed by the ICA, Providence or the Shadow Client.

I could be wrong, but I believe Rotterdam was the chief of police? I would need to fire the game up to make absolutely sure

Here is what the Wiki says:
Rutgert Van Leuven has obtained some incriminating photographs of the mayor of Rotterdam which he auctions on the black market, accepting a bid from a journalist.

And another snippet*:
One of the mission objectives is to eliminate him, as the client the Mayor believes he has failed.

*The person who wrote this left this without a reference or citation. In fact the wiki doesn’t seem to have a policy on citations.

It’s also what I said, and I am always right.

You know who else makes up facts, never admits when he is wrong and bullies people who try to correct him or tell him otherwise? Donald Trump, you are behaving like Trump. 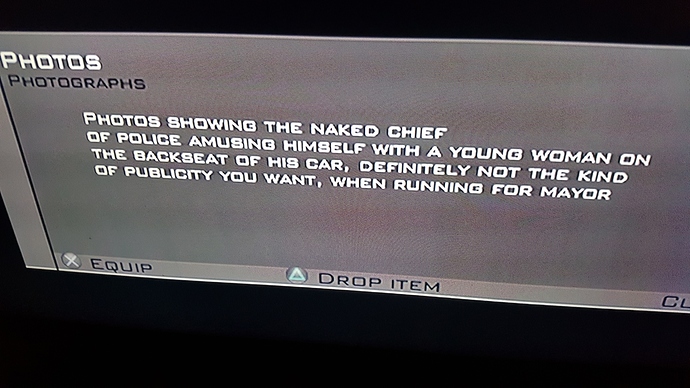 Ah so we are both correct and Sean is wrong. This result makes me happy.