The Icon, A House Built on Sand, Landslide

Hello there, I own hitman the complete first season (used disk) and I can’t seem to play the bonus missions (the icon, house built on sand and landslide). I’m planning to achieve 100% trophies and these missions are part of the trophies. I can’t access them and I can’t find them on the PS store. Any help please ?

Have you checked your add-ons from your PS4 menu? It should look like this.
(Keep pressing the D-pad down button from a selected game, then press X.) 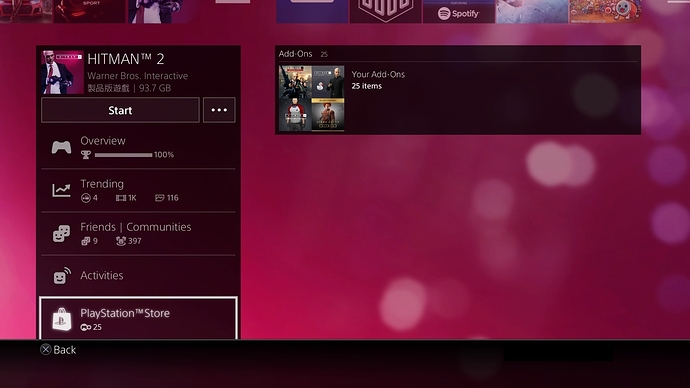 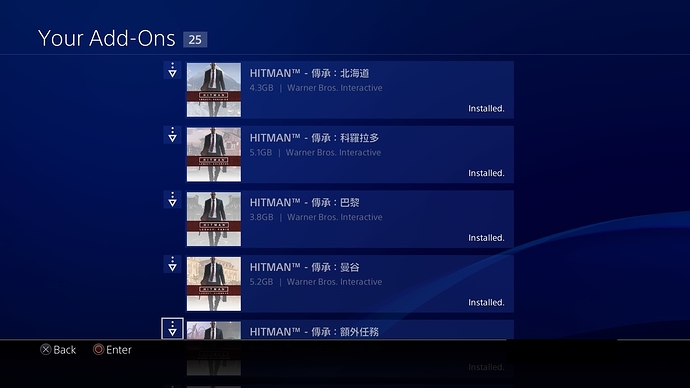 Yes I did, It’s not showing. Any other suggestions ?

My guess is since you bought a used disc, the bonus missions were probably redeemed by its former owner with a serial code. The code can be redeemed for one time only. So I think you won’t be able to gain access to those missions. I am sorry.

The “Bonus Episode” isn’t included on the disk in the Complete First Season release - it was included via a one-use redemption code that was included inside the box. As your copy is used, this code has likely already been redeemed.

Many years ago, IO stopped selling the episodes that made up Season One individually so there is no way to simply purchase this missing content. The only way to get it will be to purchase the entire game digitally (it’s massively discounted at the moment on PS4) which will add the missing content to your library, which you will be able to download and play using the same game you boot from when using the disk.

thank you guys for helping

Doubt they’ll ever add it again - it’s been this way for a long time and is just another example of a long history of developers attacking used copy sales. Yes it wasn’t IO’s fault the game was simply too big to fit on the entire disc, but to remove it from the store so that the second-hand market can never touch the content was a deliberate move.

At least you purchased the edition that has the entire main campaign on it - the Definitive Edition had to include the final mission in Hokkaido in the one-use code as well, so those buying that edition used can’t even play the full game. And it gets even worse for those playing the game on Xbox One - the Definitive Edition doesn’t include Colorado or Hokkaido (one third of the game!!!) on the disc.

yes it’s really frustrating !! so if i purchase the digital version of the game i will be able to play the bonus episode on my disk??

yes it’s really frustrating !! so if i purchase the digital version of the game i will be able to play the bonus episode on my disk??

I am not sure but the chances are good you can play it “on your account”, though not “on your disk” by whatever you mean with that.

However before you buy H2016 at full price consider to get Hitman 2 + Legacy pack instead as it includes Bonus Missions + Hitman + Hitman 2. But in that case you have to start from the start again.

The DLCs are all compatible with each release of the “base game” (digital, Complete First Season and Definitive Edition), so you wouldn’t have to redownload the entire game digitally even though it will give you the option. Just download the Bonus Episode and it will automatically install and attach itself to the game install on your PS4 from the CFS disc.

okay!! thanks a lot guys

Also: One thing I forgot to mention - buying the rest of HITMAN 2016 digitally to replace the missing episode will also upgrade you to the GOTY edition and you’ll also be able to download the GOTY content from your library too. So gives you an incentive to do it.